What would you do if you were trapped in a room with a ticking time bomb? Would you look for some clues that would help you try and disarm it? Wouldn’t a reference manual be very helpful? In Keep Talking and Nobody Explodes you are trapped in this situation but the reference manual just so happens to be in the hands of a player that can’t actually see the bomb. Keep Talking and Nobody Explodes is an innovative party game that explodes with fun.

In Keep Talking and Nobody Explodes you and at least one other partner play as a group of bomb disposal “experts”. One of the players is trapped in a room with a ticking time bomb while the other player(s) are stuck in another room with the bomb disposal manual. Even though it contradicts the game, I would recommend playing the game in the same room though since the communication probably won’t work well if you’re screaming between two rooms.  The player trapped in the room can only see the bomb and the challenges that await the players. The other players can only see the disarming manual (provided on the game’s website). Outside of purely guessing, neither group of players have enough information to do their job. Both groups need information from the other player to disarm the bomb so they need to work together to give each other the information needed to diffuse the bomb. The bomb is on a short timer though so you need to work quick and accurately or you will trigger the bomb and the player trapped in the room with the bomb is “killed”.

So what does the game play like? Essentially one player gets to look at the bomb which has different modules/puzzles on it. The bomb player will have to describe one module at a time in detail while the other players look up how to disarm it which may require them to ask for additional information from the bomb player. When these player(s) figure out what needs to be done they must then relay this information back to the bomb player.

Keep Talking and Nobody Explodes relies heavily on communication. Since you will never have all of the information yourself you need to do a good job communicating crucial information to the other player(s). This element of the game makes for a great party game and it could help people improve their communication skills.

Each level in the game appears to be five minutes long at max. While five minutes might seem like a lot of time, it really isn’t. Time seems to go really fast especially for the manual players. When using the manual I regularly thought we had plenty of time left but it turned out we had less than 30 seconds left before the bomb was going to explode. The time limit forces you to talk/think quickly but also accurately since if you make too many mistakes the bomb will explode. 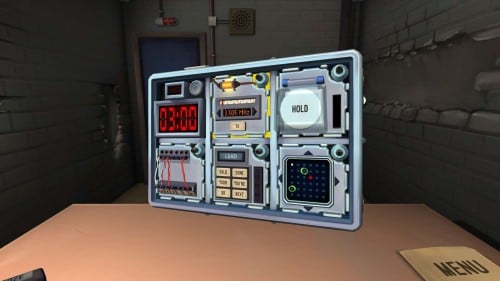 Since only one player actually “plays” the game at a time, you might be thinking that it must not be much fun for the player(s) that are looking through the manual. After playing both roles for pretty much an equal amount of time, I have to say that I actually might have had more fun with the manual portion of the game. Disarming the bomb is fun as well. While the bomb player actually has to perform all of the actions I personally think the manual players are more responsible for the success or failure of a mission. Being one of the manual players is pretty tense since you need to quickly flip/scan through the manual looking for the correct information while you have no idea how much time you have remaining.

While the bomb player has to do all of the actions and do a good job describing the bomb, the manual players have to do all of the work figuring out how to disarm the bomb. This requires a lot of flipping through the manual and trying to figure out how to solve the puzzle. This is one of the few problems I had with the game. At times flipping/scrolling through the manual is kind of a pain in the butt. I am guessing this was done on purpose in order to build up the tension as players flip through the pages. As you get more familiar with the game this issue starts to resolve itself as you get more familiar with the manual.

While some of the puzzles are better than others, I generally had quite a bit of fun with most of the challenges (except for Morse Code) I have encountered so far. The randomization of the puzzles for the most part seems to work well. While you will encounter the same puzzles a lot, they rarely ever have the same solutions so you need to attack them in different ways each time. The one exception seems to be the button challenges. This puzzle seems to repeat itself a lot more than the other puzzles. The button puzzle seems to be meant as more of a quick challenge which helps you make up time if you took too long on another puzzle.

The key to Keep Talking and Nobody Explodes is the communication. In order to be successful in the game you need good communication with your partner(s). The game doesn’t give you a lot of time to waste so you need to be constantly moving if you want a chance at finishing the level successfully. While I haven’t completed the game yet, I would say that the game is moderately difficult since even if you are communicating well, you could still have some trouble completing some of the levels. The farther you get in the game the more the game starts to mess with you. Eventually the game will start throwing obstacles in your way like annoying buzzing sounds and the lights in the room can occasionally go out so you can’t even see what you are doing. The difficulty of the puzzles also get significantly more difficult and time consuming. Some of these later puzzles can take so long that it makes it hard to complete levels in which they show up.

Here are some other quick thoughts:

Bang For your Buck

While I have only played the game for a couple hours I have to say that the game appears to have quite a bit of replay value. The game currently has 28 missions/scenarios which usually differ in the amount of time you get and how many challenges you need to complete. While the basic premise in each mission is the same, each mission feels different since the types of challenges you face and the amount of time you have to complete the challenges differ making each experience different. In addition to the missions the game has a free play mode which randomly creates a scenario based on the settings you pick.

While Keep Talking and Nobody Explodes levels are usually only five minutes long, you will want to play several missions in a row. In my first time with the game I ended up playing the game for around an hour and a half. While the game repeats the same puzzles, the puzzles are randomly generated so you will rarely encounter the same challenges. I would probably not play the game for more than an hour or so in one sitting though since you get a little sick of the game after an hour or so. I will definitely come back to the game since I had a lot of fun with it.

While it is not going to be for everyone, Keep Talking and Nobody Explodes was a pleasant surprise and one of the most unique games I have played in a long time. I honestly can say that I have never played a game like it before. The game is such a good co-op game since communication is so important in the game. Cooperation is imperative since no person will have all of the information so the players need to communicate well in order to give the other player(s) the information they need to help defuse the bomb.

As I mentioned, Keep Talking and Nobody Explodes will not be for everyone. While you could theoretically play the game by yourself, it wouldn’t be very fun. The game doesn’t really have an online feature so you need to either have people to play the game with locally or figure out some way to communicate with someone in another location. If you don’t like these type of games, you probably won’t like Keep Talking and Nobody Explodes.

If you like interesting co-op experiences though I think you will love the game. Keep Talking and Nobody Explodes is one of the most original and engaging multiplayer experiences that I have played in a while.