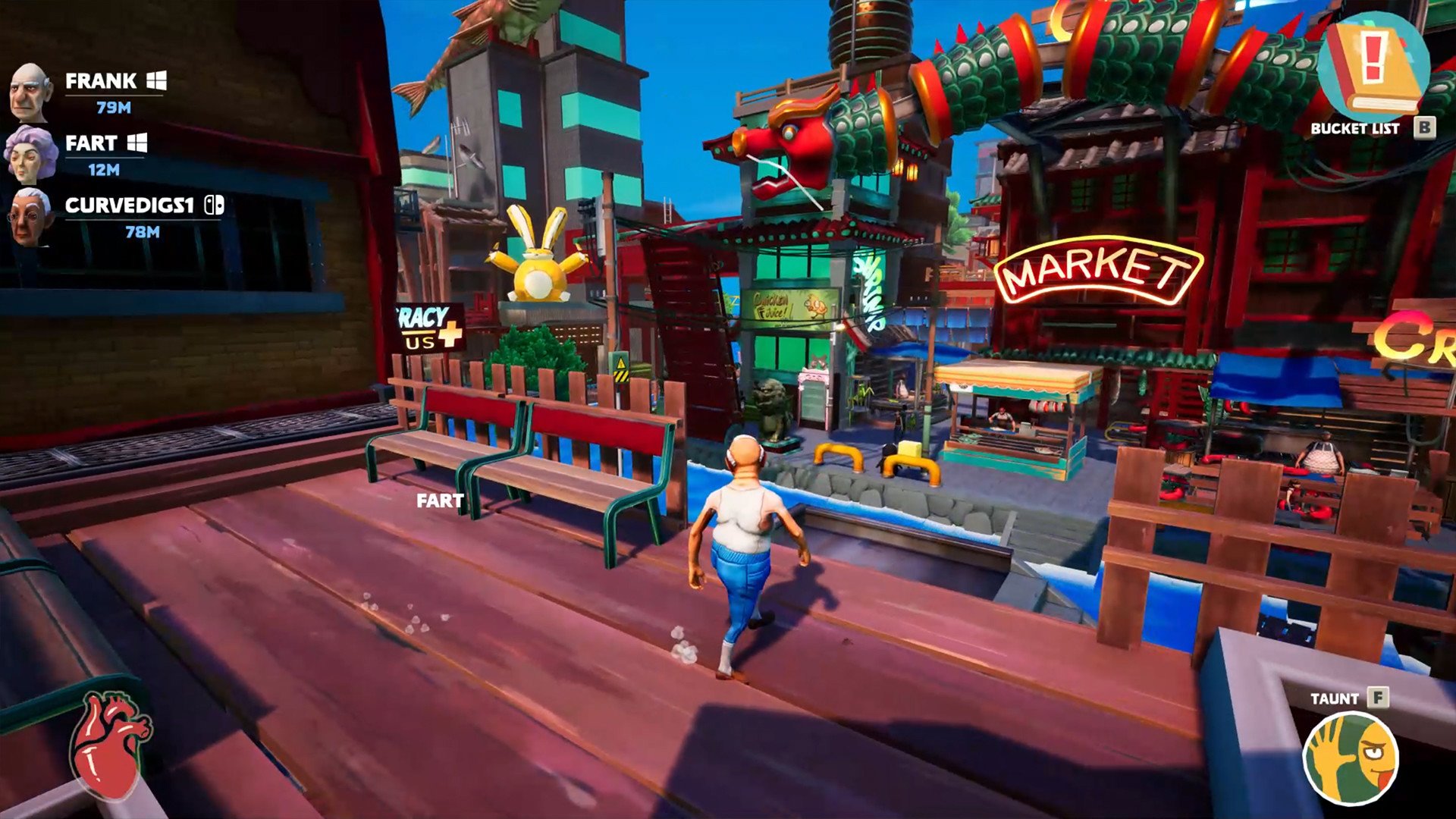 Released around seven years ago, Goat Simulator is a video game that actually had a pretty big impact on the indie video game scene. The game was initially developed as a joke during a game jam, but it eventually was turned into a full fledged game. It ended up becoming a huge indie success and lead to a whole genre of indie video games that tried to capitalize on the fact that silly games sell. The general consensus around a lot of these games are pretty mixed where some people love them, and others hate them. One of the latest games to enter this genre is Just Die Already. In a lot of ways the game felt like what you would get if the goat from Goat Simulator was replaced with senior citizens. While not a huge fan of this genre, I was intrigued to see what the game had to offer as I occasionally enjoy a silly game. Just Die Already is a silly somewhat outrageous game that can be quite funny at times, but that silliness leads to its own problems.

In Just Die Already you play as an elderly person in a world that has has no need for or even wants old people around. In fact you live in a world that actively hates old people. To make matters worse you have been recently kicked out of your retirement home. In order to get proper retirement care you need to earn retirement tickets. This involves attempting dangerous stunts and causing general mayhem wherever you go. In your attempt to finally have a peaceful retirement will you finally learn how to live a little?

If I were to describe Just Die Already’s gameplay it probably is best described as an open world sandbox. Basically once you are kicked out of your retirement home the world becomes your sandbox. You can pretty much do whatever you want. You have basic movement and jump controls. You also have a button dedicated to both your left and right hands. These buttons are used to grab and use objects held in your hands. These are also used for climbing and interacting with the environment. The game gives you access to a number of objects, weapons and vehicles.

While you are given the freedom to do whatever you want, the game gives you a little structure through a book filled with “life goals”. These are basically different little objectives/challenges/goals that you can complete while causing chaos around town. Some of these are basic search and find objectives such as eat X number of food items. Others entail hurting/killing yourself or other inhabitants in specific ways, reaching specific locations, or completing various challenges in a certain way or within a certain amount of time. Most of the objectives have several different levels to them. When you complete these you will unlock new items/weapons that you can access through vending machines. Others will give you retirement tokens which are needed to unlock your final retirement home.

These life goals were mostly added to the game in order to give you some guidance or objective to complete while playing the game. Otherwise the game would have just been an exercise of messing around to create your own fun. For the most part I think the life goals were good additions to the game. Some of them are pretty basic where you will accomplish them just by fooling around. Others will require you to complete a platforming or other type of challenge that will test your gaming skills. Some of the challenges though are little puzzles as you have to figure out how to manipulate the environment or things around you to complete it. Not all of the challenges are equal as some are clearly better than others. I liked how they bring structure to an otherwise random game though, and they are usually pretty fun to try and complete.

While the ultimate goal of Just Die Already is to complete various life goals/challenges, the game is ultimately just a playground of causing as much chaos and randomness as possible. This honestly might be the game’s greatest asset. In a lot of ways the game is a perfect “streaming” game or a game to play with friends as you fool around. In a way the whole game plays a lot like one big joke. The comparisons to games like Goat Simulator are obvious. The game is mostly built around having fun by just fooling around. The game is wacky and ridiculous on purpose which leads to a decent amount of laughs. It is funny seeing all of the random stuff that goes on around you. Some of the intentional jokes are kind of funny, but most of your enjoyment will come from the game’s overall randomness/silliness. You can have fun just watching what is going on around you. Fans of silliness should enjoy their time with Just Die Already.

The problem is that this also leads to a gameplay experience that can be kind of frustrating. If you are looking for a game with precise controls, Just Die Already is going to drive you nuts. Generally I don’t mind wonky controls in these type of games as it is part of the game’s charm. That wasn’t the case for Just Die Already though as the controls were kind of frustrating. The punishment for death is minimal as you can just reset to a nearby location. The problem is that some of the challenges require you to perform a very specific task which is made significantly more challenging because the controls will not work with you. At times it feels like you need to have luck on your side just to complete very basic tasks. It is frustrating failing the same task over and over again due to the controls not cooperating instead of your own gaming skills.

Other than the sometimes frustrating controls, the other main issue I had with Just Die Already was the fact that it can get kind of repetitive after a while. The game doesn’t have much structure. The game pretty much just gives you some challenges/objectives to complete, and then lets you do whatever you want. These can be fun for a while, but the game is one of those where you kind of have to make your own fun. Outside of completing the objectives you basically have to just fool around causing havoc around you. This can be fun for a time, but I thought it got a little boring after a while. Causing chaos is fun at first, but it didn’t really last. This is where having another person to play the game with should add to the experience. If you are playing the game alone though, you may get tired of the game quicker than you would hope.

From your first glimpses of Just Die Already it should be pretty obvious that the game is not meant to be taken serious. Basically the entire game is built around creating chaos in an open world sandbox. This premise leads to most of the game’s strengths but also its weaknesses. Most of the gameplay is built around accomplishing various challenges. They can be a little hit or miss, but I appreciate the structure that they give the game and some of the challenges feel like little puzzles. Otherwise the game is mostly about creating your own fun. This can lead to some pretty funny moments as the game can become pretty ridiculous at times. The problem is that you mostly need to make your own fun which means that the game can become kind of boring after a while. This is not helped by the controls which are imprecise to say the least. This adds to the silliness, but it becomes kind of frustrating when you fail to accomplish something due to the controls not working how you would anticipate.