When I was a kid there were several board games that I remember playing a lot. One of those games was the 1991 game Jumpin’ Monkeys. I don’t know if we ever really played with the official rules but I definitely remember loving to shoot the monkeys at the tree. I can remember wasting hours upon hours playing this game when I was young. Despite having fond memories of the game I had a strong feeling that the game was not going to live up to my memories of it. I had this feeling because all too often the games that I remember from my childhood have failed to live up to what I remember of them. Unlike some of the other games though I was hopeful that Jumpin’ Monkeys would hold up because I have always liked games where you are trying to launch objects at another object hoping to get them to stick. Jumpin’ Monkeys is a fine launching game but is another example of game from my childhood not being as good as I remembered.

How to Play Jumpin’ Monkeys

Jumpin’ Monkeys is played in rounds. Each round begins with all of the players placing one of their bananas into a banana pile. The youngest player then calls out “Jumpin’ Monkeys!” which starts the round. 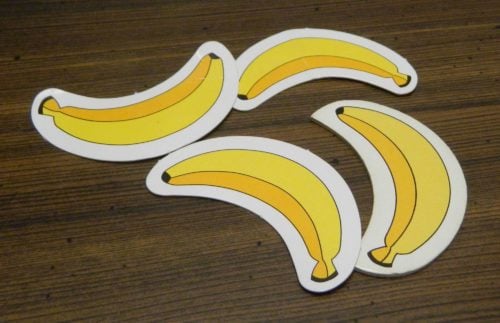 In Jumpin’ Monkeys all of the players play at the same time. The players place one of their monkeys on their launcher. They pull back on the launcher and let go in order to launch their monkey towards the tree. 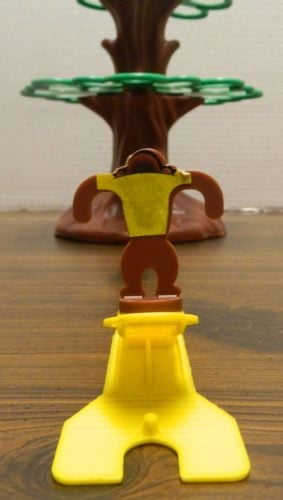 The goal is to get your monkeys to land on the tree. All monkeys that have at least one of their hands hanging onto a branch count as being in the tree. Any monkey laying down on the leaves does not count and must be immediately removed from the tree. If you knock off another player’s monkey while removing your monkey, you must put that monkey back how it was before you knocked it off. 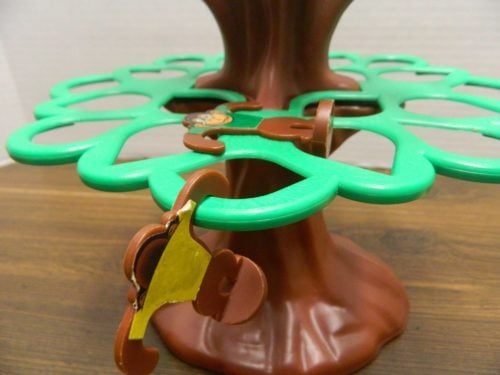 All monkeys that were removed from the tree, missed the tree entirely, or were knocked off by another monkey landing in the tree will have to be launched again.

When one player has gotten all of their monkeys into the tree (with none of them lying down) wins the round. The player collects all of the bananas from the banana pile. All of the monkeys are returned to their owners. Each player puts one banana into the banana pile and another round is played. 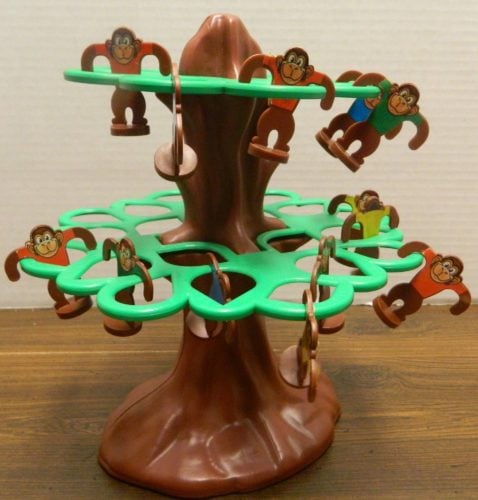 The red player has gotten all four of their monkeys on the tree so they have won the current round.

The game ends after four rounds have been played. The players count up their bananas. The player with the most bananas wins the game. If there is a tie, the tied players play another round with the winner of that round winning the game. 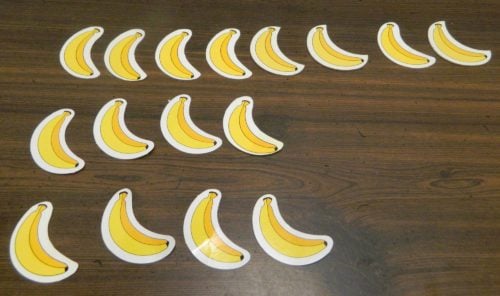 My Thoughts on Jumpin’ Monkeys

At its’ core Jumpin’ Monkeys is like pretty much every other action/dexterity game where you are launching objects through the air. All of the players play at the same time trying to use their catapult to shoot their monkeys onto the tree. The first player to get all of their monkeys on the tree wins the round and receives all of the bananas in the banana pool. If this sounds like basically every other launching game that is to be expected because that is basically what it is. If you have ever played a launching game before you should know what to expect out of Jumpin’ Monkeys. If you have never liked these type of games, Jumpin’ Monkeys is not going to change your mind. If you like these type of games you should have some fun with the game. It is not going to be something that you play all of the time, but it is fine for a game that you bring out every so often.

There might not have been as many launching games when Jumpin’ Monkeys was first released as there are today but as I have reviewed quite a few of these type of games it only seems fair that the game should be compared to the other similar games. This is where I was most disappointed with Jumpin’ Monkeys as it has not aged as well as I was hoping. While I still had fun playing the game, in a lot of ways it is not as good as a lot of the other launching games that I have played. It is partially due to time as people have figured out how to improve on the genre. It is also due to some issues that I had with the game.

I would say that the biggest problem that I had with Jumpin’ Monkeys is that it is surprisingly more difficult than I remember. For some reason it is considerably harder to get the monkeys to stick on the tree than I remember. I think this is due to a couple things. First of all every time that a monkey hits the tree it shakes the rest of the tree. They don’t usually shake the tree very hard but the monkeys are usually just barely hanging on the tree so this is still enough to knock monkeys off the tree. Way too often players would get a monkey on the tree and then it would be knocked off when another monkey hit the tree.

Another problem is that the game has a rule that any monkeys that are lying flat on the tree don’t count and have to be removed from the tree. I would say that around a third to half of the monkeys we launched would land on the tree on their side and thus had to be removed. This regularly happened when a monkey was knocked down from the top level to the lower level. As it is hard enough to get monkeys on the tree, I don’t think it is a good idea that you have to remove all of the monkeys that aren’t hanging from one of the holes. After a while our group ditched this rule entirely and I believe it improved the game.

I think the main reason why the game is so difficult though is due to the launchers themselves. While the launchers are pretty sturdy I question how accurate they are. The monkeys generally shoot in the direction you aim (they can occasionally shoot backwards) but how they fly off the launchers can vary. The monkeys will regularly go a little left or right of where you aim. I think the bigger problem with the launchers is that it is hard to get a consistent distance from them. Two shots, where you apply around the same amount of pressure, can give you different results. One shot can land your monkey on the tree while the next overshoots the tree. It is really hard to consistently shoot when two shots can give you different results.

With the game being more difficult than you would expect, this leads to the game taking longer than it should. Typically the rounds in these types of games take just a few minutes. That is not the case for Jumpin’ Monkeys though. Rounds usually take at least five minutes and can some times take quite a bit longer. As you play four rounds in Jumpin’ Monkeys it means the game will usually take at least 20 minutes. While this is not overly long, these type of games are usually better when they are shorter as you can then play a couple games within 30-45 minutes.

Part of the reason why Jumpin’ Monkeys takes so long is due to the monkeys flying everywhere. I can’t be too harsh on Jumpin’ Monkeys for this problem as I have yet to find a launching game that has solved this problem. The problem with Jumpin’ Monkeys is that the launchers are not particularly accurate which means that the monkeys will fly everywhere. The players then have to make a decision of how they are going to handle it. Players either have to waste time picking up other players’ monkeys, players have to run around the room picking up their own monkeys, or the players have to agree to occasionally stop the game to pick up and return all of the monkeys to the proper player. In my opinion the last option is usually what works best.

While this is kind of nitpicky, I really don’t understand the point behind Jumpin’ Monkeys scoring system. Each player is given four bananas at the beginning of the game and every player puts one banana into the pot before each round. The player who wins each round gets all of the bananas that were put into the pot. What I don’t get about the scoring system is why there is a pot. You could easily just ignore the pot altogether and give one banana to the winner of each round. You would get exactly the same result while cutting out an unnecessary step.

As Jumpin’ Monkeys has been remade quite a few times since 1991 by different publishers, the quality of the components are going to somewhat depend on the publisher. Each version of the game comes with the same components but the quality may differ and the artwork definitely changed at one point. In general I would say the component quality is pretty average. I have already commented that the launchers probably should have been a little more accurate. The tree is pretty sturdy even though I wish it shook a little less when a monkey hits it. The monkeys are pretty durable but they will get damaged after extended play. Basically the components do what they are supposed to but they could also have been better.

Should You Buy Jumpin’ Monkeys?

Jumpin’ Monkeys is a solid launching game but it just didn’t live up to my memories of the game. Jumpin’ Monkeys is basically your typical launching game where you are shooting monkeys at the tree hoping they will stick. I had some fun with the game and I think other people who like these type of games will enjoy it as well. The problem is that I have played quite a few other launching games that are better. The biggest problem I had with the game is that it is considerably harder to get a monkey to stay on the tree than it should be. Monkeys will regularly bounce and fall off the tree. The launchers can also be inaccurate at times. This leads to the game taking longer than it probably should. The scoring system is also kind of pointless.

If you would like to purchase Jumpin’ Monkeys you can find it online: Amazon