For those of you who are unaware of Jimmy the Greek he was a minor celebrity from the 1950s to the late 1980s. He was most known for two things. First he was known for being a Las Vegas bookmaker and became famous in the world of gambling. He ended up using this fame to eventually get a spot on NFL Today the pregame show for NFL games on CBS. In this role he mostly predicted the winners of the the week’s NFL games. Jimmy the Greek is not the type of celebrity that you would expect to get their own board game, but his connection to gambling makes some sense for certain types of board games. What genuinely surprised me though was the fact that Jimmy the Greek ultimately had three different board games. Today I am looking at one of those three games Jimmy the Greek Odds Maker Poker-Dice. I have to say that I didn’t have particularly high expectations for the game as it looked like your typical dice rolling game. Jimmy the Greek Odds Maker Poker-Dice takes your typical Yahtzee style dice game and applies a new coat of paint and slightly different dice to create a dice game that fails to bring anything new to the genre.

How to Play Jimmy the Greek Odds Maker Poker-Dice

Each player will begin their turn by rolling the five dice. If the player likes what they rolled they can immediately score their roll (see below). 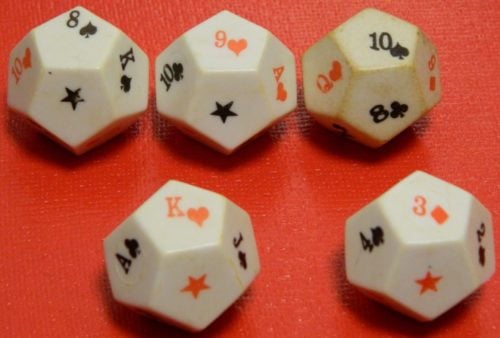 This was the player’s first roll. As they didn’t roll any good scoring options they will probably want to re-roll some or all of their dice. The player may want to keep the 8-9-10 as it is the beginning of a straight. 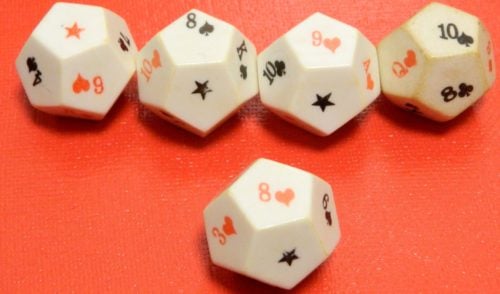 This is the player’s dice after their second roll. The player is currently one number away from a straight. The player also has three eights if they use the wild. The player can either choose to re-roll the second eight to try and get the straight or they can roll the nine and ten hoping to roll more eights.

After a player has finished rolling the dice they will choose which category on their score sheet they would like to score. A player must choose one and only one category for each round. Each category can only be scored once during the game.

This was the player’s final roll. Based on their roll the player can count it as a straight as the star can count as a seven or a queen.

After a player has chosen the category they will write down how many points they scored for the dice they rolled. If a player did not complete the requirements of the category they will score zero points for it. Stars are considered wild even though using them may impact how many points you score. For the categories that use a wild you will score the lower value if you use one or more wilds, and you will score the higher value if you use no wilds. The categories and the number of points you score for each are as follows:

The above player decided to score their dice as a straight. As they used a wild in their straight they will score 35 points for the straight.

After a player has scored their roll play will pass to the next player.

My Thoughts on Jimmy the Greek Odds Maker Poker-Dice

I honestly think I could do a good job explaining Jimmy the Greek Odds Maker Poker-Dice in just one sentence. Basically the game is what you would get if you took Yahtzee, changed the dice from normal dice to 12 sided playing card dice, and added almost twice as many scoring categories. Otherwise the two games are basically exactly the same. In both games the players take turns rolling the dice. Players have three turns in order to roll the best combination that they can. They then choose one of the various scoring categories and tally their score based on what they rolled. At the end of the game the players compare their scores and the player that scored the most wins the game. This description of the basic gameplay could simultaneously be used to both describe Jimmy the Greek Odds Maker Poker-Dice and Yahtzee as the main mechanics are exactly the same.

As the main gameplay is basically the same your opinion of Jimmy the Greek Odds Maker Poker-Dice is going to be the same as your opinion of Yahtzee and other similar dice games. People who like Yahtzee and other similar games will likely enjoy the game. People who have never cared for this genre of dice games will find nothing particularly new that will make them change their mind. As I am of the belief that Yahtzee is neither a good or bad game, the same holds true for Jimmy the Greek Odds Maker Poker-Dice as well. The game is a decent dice rolling game. The game is easy to play as the rules are pretty straightforward. There is a high reliance on luck though as you need to roll well in order to do well in the game. The little strategy that there is to the game is trying to analyze the odds of rolling different combos and determining how much of a risk you want to take. If you don’t mind playing a dice game where you don’t have to put too much thought into what you are doing you can have fun with Jimmy the Greek Odds Maker Poker-Dice.

Jimmy the Greek Odds Maker Poker-Dice shares almost everything in common with Yahtzee, but there are a couple of differences between the two games that I would like to quickly discuss.

Probably the biggest difference between the two games is that the game uses twelve sided dice instead of your traditional six sided dice. The twelve sided dice include all of the different cards from a standard deck of playing cards along with eight stars/wilds. With the layout of the dice in some ways playing Jimmy the Greek Odds Maker Poker-Dice feels like a variant on traditional Poker. Most of the scoring categories in the game are actually based on the different types of scoring hands found in Poker. Outside of the cosmetics changing the dice does change the gameplay in a few ways.

The main difference to the gameplay is that each dice features twelve different numbers. Thus the odds of rolling any particular side is halved. Each playing card is only featured once among all of the dice. This means that it is harder to roll any particular combination in the game. In normal Yahtzee you have a one in six chance of rolling any particular number. Those odds are considerably lower in Jimmy the Greek Odds Maker Poker-Dice. The one thing that somewhat offsets this is the fact that the game includes wild symbols. These symbols can be used as any other number/suit combo. All of the dice have one or two of these wild symbols on them. Therefore you can use wilds to improve your odds of rolling a particular combination.

Other than increasing your odds of rolling certain combinations, the wilds also add an interesting dilemma to the game. Most of the scoring categories in the game allow you to use wilds. The catch is that while the wilds make it easier to roll a combination, using them will score you half as many points. Usually you are better off using the wilds, but there are times that you may consider not using them in the hope of scoring more points. This mechanic doesn’t drastically change the overall gameplay, but I think it is a nice addition to the game. Choosing whether to use wilds or not adds some strategy/risk taking to the game without really adding any difficulty.

The other major addition to the game is the fact that with the twelve sided dice the game added considerably more scoring categories to the game. In fact Jimmy the Greek Odds Maker Poker-Dice has almost twice as many scoring categories as Yahtzee. Some of these additions are obvious. Like normal Yahtzee you can score points for the number of dice you roll of each number which adds a lot of the new categories. Most of the other scoring categories come from various Poker hands. This includes various types of pairs as well as flushes. Having more choices adds a little more strategy to the game. It also makes the game considerably longer though. As there are almost twice as many scoring options games of Jimmy the Greek Odds Maker Poker-Dice are likely to take almost twice as much time as games of Yahtzee. One positive of Yahtzee is that games can be played pretty quickly. With all of these additional scoring opportunities though the game does tend to drag at times. Twenty four rounds is too long for the game. Towards the end of the game you are going to just wish that it would end.

As for the components I would say that they are pretty average. The gameboard and dice cup are pretty typical plastic pieces. The Oddsmaker is basically only used to tell you the odds of rolling any particular combination. As for the dice I found them to be kind of disappointing. The dice are made of a pretty solid material. The problem is with the symbols. The symbols on each side are pretty small and can be hard to read at times. Also as the symbols are not engraved into the dice they are susceptible to fading after extended use. The components ultimately serve their purpose but don’t do much else.

Should You Buy Jimmy the Greek Odds Maker Poker-Dice?

In most ways Jimmy the Greek Odds Maker Poker-Dice is very similar to Yahtzee and other similar dice games where you are trying to roll different combinations in order to score points. If you have ever played Yahtzee or another similar game you probably already have a pretty good idea of what to expect out of the game as the main gameplay is exactly the same. There are really only two main differences between the two games. First the game uses twelve sided card dice instead of your typical six sided dice. This gives players many more combinations that they can roll while also making it hard to roll any particular symbol. The addition of wild symbols adds an interesting dynamic though. Otherwise with the addition of more numbers there are considerably more scoring categories. This gives players more options, but it also makes the game take considerably longer.

Basically my recommendation for Jimmy the Greek Odds Maker Poker-Dice comes down to your opinion of Yahtzee and other similar dice games. If you don’t really care for these type of dice games I don’t see you really liking the game as it doesn’t really change the formula in any meaningful way. Fans of these type of dice games though should have fun with the game as it adds a few interesting twists which might make for a good change of pace. For those people I would maybe recommend picking up Jimmy the Greek Odds Maker Poker-Dice if you can get a good deal on the game.