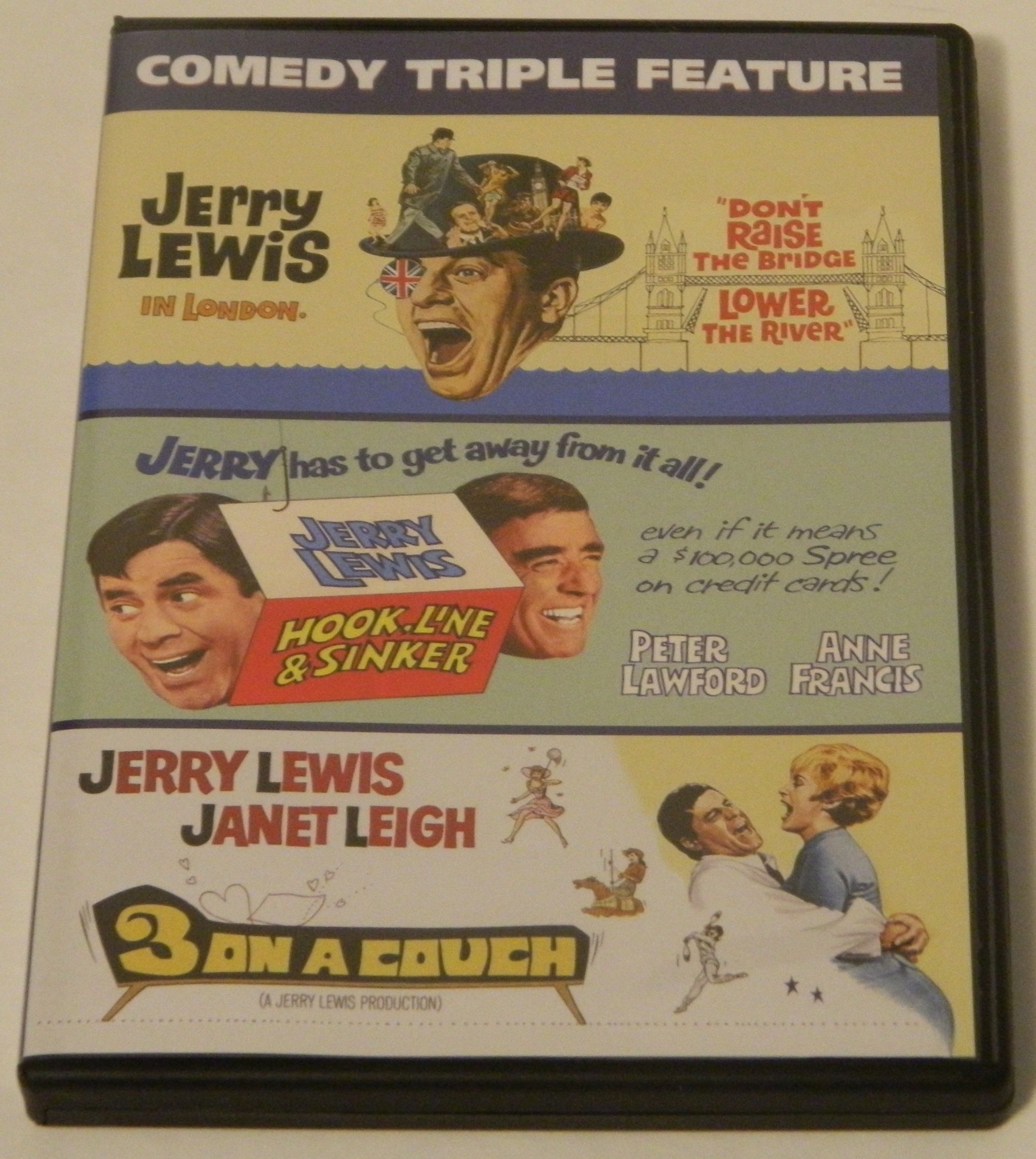 Mill Creek Entertainment recently released Jerry Lewis Comedy Triple Feature on DVD, a collection of three Jerry Lewis comedies from the mid-to-late ’60s. The films included are 3 on a Couch (1966), Don’t Raise the Bridge, Lower the River (1967), and Hook, Line & Sinker (1969). Is a collection of three older comedy films available for less than $10 on Amazon worth the price? Here are my thoughts on each film in the collection:

3 on a Couch-We’ll start off with what is definitely the best of the three films (at least in my opinion), 3 on a Couch. In this film, Jerry Lewis plays a man named Christopher Pride who wins a design contest that will take him to Paris to live for awhile. He wants his girlfriend Elizabeth (Janet Leigh) to join him but she is a psychiatrist who has three women with relationship problems that she simply can’t leave behind. After becoming angry and getting drunk, Christopher and his friend come up with a hair-brained scheme to get Elizabeth to come to Paris. He decides to “date” the three women without Elizabeth’s knowledge to help give them back their self-esteem so they won’t need their psychiatrist anymore. Since they are all into different types of men, he plays three distinct “characters” in order to date each of them. As you can probably guess, this leads to several wacky situations that Christopher needs to get out of to keep up the charade.


Even though I think 3 on a Couch is the best of these three films, I don’t think it was great by any stretch of the imagination. It just is by far the funniest of the three films. However, I do have a big problem with the disturbing concept of the film. It might not have been considered creepy in the ’60s, but it sure is now. Also hurting the film is the fact that Christopher is a very unlikable main character. In addition to his disturbing plan, he is also very sexist and calls people that need to go to the psychiatrist “nutty” and “cooks” just because they need somebody to talk to. He is also very close to being abusive to his fiance, putting immense pressure on her to try to force her to go to Paris, even threatening to kill himself at one point. Obviously the sixties were a different time but any 2018 film that would try to get away with any of this would be rightfully rejected by audiences.

So why do I think 3 on a Couch is the best of this comedy triple feature? Mainly because it is actually relatively funny at times. A lot of the humor is just cheap laughs but I personally found stuff like the crazy “green stamp” lady to be strangely funny. The secretary has some funny quips here and there and Christopher is of course put in some “wacky” situations, some of which are actually quite funny. Also, if this film would have ended like two minutes earlier, I would have given it some credit for its ending (and probably bumped it up to a 3/5). Unfortunately, it squanders its opportunity and thus gets a 2.5/5 (mainly due to the creepy concept and the unlikable main character). However, if you can look past the now disturbing concept of the film and stand Christopher’s awfulness, this is actually a semi-funny film that might be worth a try.

Hook, Line & Sinker-This film was the one that stood out the most to me when Mill Creek Entertainment offered this collection for review. I love films about living like you’re dying. The Bucket List and Yes Man are two of my most re-watched movies. Unfortunately, Hook, Line & Sinker isn’t exactly what I thought it would be. Instead, it follows a completely normal family-man/insurance salesman named Peter Ingersoll (Lewis), who finds out from his best friend and doctor that he will die soon. Peter wants to just live out his last few weeks normally but his wife convinces him to take the exotic fishing trip he has always dreamed of and just charge everything on credit cards. He has a great time and runs up a large bill of tens of thousands of dollars before finding out that he isn’t actually dying (and that isn’t the only surprise twist the film throws at viewers but I won’t spoil it).

My thoughts on Hook, Line & Sinker are mixed. It does have a few funny moments here and there (especially the gopher sprinkler scene) but I wouldn’t exactly consider it to be a “funny” movie. Honestly, it is almost more of a drama. However, there was one thing that really impressed me about the film, the twist in the middle (not the part about him not actually dying, another much more shocking reveal). I never expected a film from 1969 to do something like that. Other than that awesome twist though, this is a slightly below average film due to the lack of humor. At least Jerry Lewis plays a somewhat likable character in this one though, unlike the other two films in this set. 2/5

Don’t Raise the Bridge, Lower the River-Ugh. Unfortunately, there is next to nothing good to say about this film. In Don’t Raise the Bridge, Lower the River, Lewis plays another extremely unlikable guy. This time he plays a “businessman” (who acts more like a con man if anything) named George Lester who will do anything to make a buck. His wife Pamela (Jacqueline Pearce) asks for a divorce while he is on one of his get-rich-quick schemes with her. He then decides to turn her family home into a restaurant (to try to prove to her that he can make money from home), which makes her even more upset and puts him in significant debt. He eventually becomes involved in a scheme to sell plans for a drill to a group of Arabs in order to get out of debt and win back his wife.

This review is going to be very short, Don’t Raise the Bridge, Lower the River frankly is one of the worst films I’ve ever seen. This was the film in the collection that I had no interest in whatsoever but I decided to give it a chance to complete this review. Unfortunately, it is just a flat out terrible film. All three main characters are extremely unlikable, especially George. However, his wife and her new love interest are almost as bad. The only characters that are actually likable are the tertiary ones that barely show up. The story is your typical con man type story and there is next to no humor to speak about. Capping off the awfulness, of course the film had to be racist as well with stereotypical “evil Arabs” that are almost like cartoon villains. I know stuff like that was common in older movies but it adds one more bad thing about the film for today’s audiences. If you plan to pick up this triple feature collection, just know that Don’t Raise the Bridge, Lower the River is awful and not even worth watching. 1/5

In my opinion, Jerry Lewis Comedy Triple Feature has one surprisingly solid film (though with a disturbing concept), one below average film with an interesting twist, and one awful film with nearly no redeeming qualities. The price is definitely right (the collection is currently selling for $8.99 on Amazon) but I’m not really sure the quality is there for the average viewer. Jerry Lewis fans will probably love it though and this does appear to be the first time 3 on a Couch has been released on any form of home video (as far as I can tell at least). Meanwhile, Don’t Raise the Bridge, Lower the River actually sells for more individually than this collection does. Jerry Lewis Comedy Triple Feature is definitely a good deal value wise but it is probably only worth purchasing for fans of older comedy films (especially Jerry Lewis fans).