Jenga is one of those board games that almost everyone is familiar with to some degree. Pretty much everyone has either played or has at least seen Jenga being played at some point. The basic premise of the game is that you build a tower of blocks with alternating layers of three blocks. The goal is to remove a block from the tower and add it to the top without making the tower fall over. Based on the popularity of Jenga, there have been quite a few spinoff games created over the years. Today I am looking at one of those games, Jenga Quake. Jenga Quake basically takes the original Jenga and adds an “earthquake” machine into the mix. Jenga Quake slightly tweaks the original game which adds some variety to the game while adding more luck.

How to Play Jenga Quake

On a player’s turn they will choose one block to remove from the tower. They can choose to remove any block from the tower below the top completed layer (a layer with all three blocks). A player can only use one hand to remove the block. 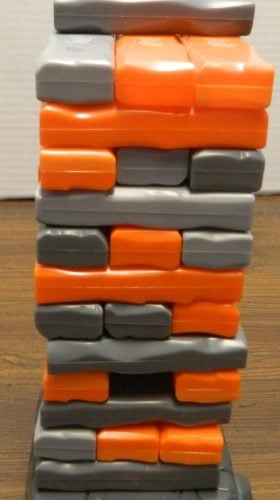 This player removed a block from the tower and added it to the top of the tower. If the tower doesn’t tip over in five seconds, play passes to the next player.

If the tower falls down during a player’s turn, that player is eliminated from the game. The tower is reset and another round is played. 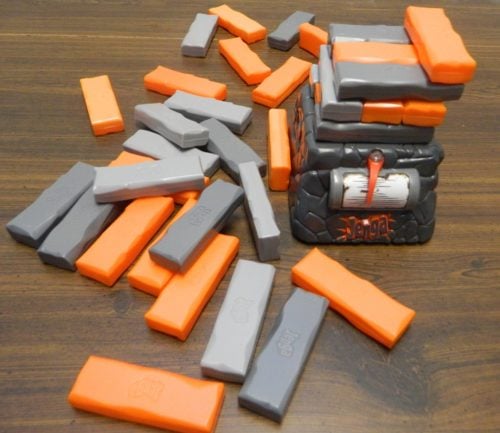 The tower has fallen over so the current player is eliminated from the game.

The game ends when only one player remains. The last remaining player wins the game.

My Thoughts on Jenga Quake

I honestly don’t have a lot to talk about when it comes to Jenga Quake. As I mentioned at the beginning of this review, Jenga Quake is very similar to the original Jenga. The tower is setup in exactly the same way except that it has 18 less blocks. Players take turns taking one block out of the tower and adding it to the top of the tower. Players are even eliminated and the ultimate winner are determined in the exact same way as the original game. Literally the only significant difference between Jenga Quake and the original Jenga is the “earthquake machine.”

I have some mixed feelings about the earthquake machine as I think it improves the game in some ways and makes it worse in other ways. Basically the earthquakes come from the base that all of the blocks are placed on top off. At random intervals the base begins to vibrate which shakes the blocks making the tower less stable. The base seems to shake at a consistent rate but the duration that the shaking can last can vary quite a bit. In general I wouldn’t say that the shaking itself is that strong. It is not like the blocks are wildly swinging back and forth. The shaking mostly makes the blocks start sliding in one direction. The blocks barely move if the shaking stops quickly. If the shaking lasts for quite a while though, the blocks can move quite a bit. This can make the tower quite unstable.

On the positive side the shaking base adds some variety and excitement to the game. In the original Jenga, players just take turns removing blocks. The player who is best at Jenga will almost always win the game. Jenga can become a little boring at times as players take their time to carefully choose and remove a block from the tower. There is no time pressure as you can take as much time as you want to make your move. This isn’t the case in Jenga Quake as you want to make your move as quickly as possible. The longer you take, the more likely the base is going to shake and knock down the tower. The chance that the tower can begin shaking at any moment makes the game kind of tense as you are trying to finish your turn as quickly as possible. This adds excitement to a game that otherwise can become kind of dull.

The problem with the base is that it adds quite a bit of luck to the game. Outside of finishing your turn as quickly as possible, you have no control over when the base is going to start shaking. You could get lucky that the base doesn’t shake at all during your turn or it could shake a lot. How long the base shakes can have a big impact on the game. If the base only shakes for a short period of time, it probably won’t affect you too much. If you get stuck with one of the times when the tower shakes a lot, the tower will likely fall on your turn no matter what you do. The original Jenga relies almost entirely on skill but the same can’t be said about Jenga Quake. No longer will the best player always win the game. How much this impacts your opinion of the game comes down to how much you can tolerate luck impacting who ultimately wins.

The original Jenga is quite short itself but I think Jenga Quake is even shorter. Unless people really take their time, I would say most rounds only take a couple minutes. I think the rounds are so short for a couple reasons. The most obvious reason is the shaking base. The base does make the tower less stable over time as it generally makes the tower start to tilt in one direction. The tower is also quite a bit shorter as there are 18 less blocks in the game. As the tower isn’t as tall, you run out of easy choices a lot faster. Finally the blocks aren’t of the same quality as the original Jenga. I wouldn’t mind the short rounds except for the fact that you spend almost as much time setting up the tower as you do playing the round. Unfortunately this is a problem that plagues all of these type of stacking games.

On the component front there are some things that I liked and others that I think could have been better. For the most part I thought the base worked pretty well. The base seems to shake pretty consistently with the only difference being how long it shakes. That is to be expected though as the game is only five years old at this point. The main problem with the components are the blocks themselves. Instead of wood blocks, the game uses pretty cheap plastic. This is a problem with a lot of the newer Jenga games. This makes the blocks slide pretty easily which leads to the tower not being as stable.

Should You Buy Jenga Quake?

Jenga Quake is basically exactly what I expected it to be. It is Jenga with a base that shakes from time to time. The main gameplay is exactly the same as you are still taking turns removing one block from the tower. The only thing that is different is that you have to work around the tower occasionally shaking. The shaking tower in some ways makes the game better and in other ways makes it worse. On the positive side it makes the game more exciting as you never know when it is going to start shaking. This forces you to try and finish your turn as quickly as possible. On the negative side it adds a lot of luck to the game. Players will be eliminated from the game because they were unlucky to have the tower shake during their turn. At the end of the day I don’t really have a preference between Jenga and Jenga Quake as they both have their own positives and negatives.

If you have never liked Jenga, Jenga Quake is unlikely to change your mind. If you like Jenga, the decision of whether to pick up the game comes down to your opinion of the shaking mechanic. If you think the mechanic sounds interesting and you can get a good deal on the game, it may be worth picking up Jenga Quake.

If you would like to purchase Jenga Quake, you can find it online: Amazon