Originally beginning as the parlor game Dictionary, Balderdash was an immediate hit when it was first released back in 1984. Despite being a mass market game, I am a big fan of Balderdash as it is a great party game. As I am a big fan of the game, I am always willing to try out a game with similar mechanics. This brings me to today’s game Inspiration. Inspiration has a strange backstory as it was originally created for The Fitzwilliam Museum at Cambridge University. I have seen plenty of board game with interesting backstories and yet I have never seen one specifically designed to be sold at a museum. Despite the strange backstory I was interested in Inspiration as it looked like it had an interesting twist on the Balderdash formula. Inspiration is a solid party game but is unfortunately a poor imitation of Balderdash as it is inferior in every way.

How to Play Inspiration

For people familiar with Balderdash or another similar game you can skim through the how to play section as Inspiration is very similar.

Each round begins with the current reader drawing one of the cards. They will read the answer given on the card. All of the players will then have to come up with a plausible question that applies to the answer that was read out. Each player will write their answer on one of their sheets of paper. When they are done they will pass their question to the reader. While the other players are coming up with their own questions, the reader will write down the question written on the card. If there are only three players, the players can agree that the reader can make up their own question to add to the mix. The reader won’t be able to vote though. 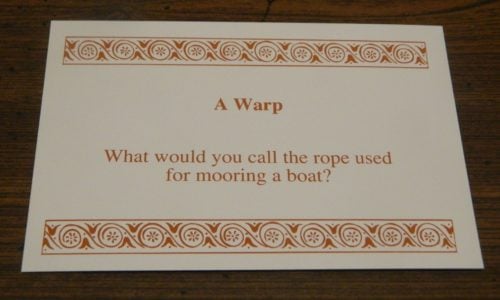 For this round players will have to write questions whose solution is “A Warp”.

Once all of the questions have been submitted, the reader will mix them up. The reader will read all of the questions while making sure not to indicate who wrote each question. The players then take turns (clockwise from the reader) making their guess for which question they think was written on the card. After everyone has voted, players will score points based on these votes.

For this round three players submitted their own questions along with the actual question. All of the players, other than the reader, will get to vote on which question they think is correct.

Players can score points in two ways depending on how the players voted.

If a player picked the right question they will take one of the muse cards from the middle of the table.

If a player picks an incorrect question, the player who wrote the question they chose will get to take one muse card from them.

After scoring is conducted another round is played. The role of reader passes to the next player clockwise.

My Thoughts on Inspiration

I might as well get right to the point and say that Inspiration is not a particularly original game. You could say it takes a lot of “inspiration” from Balderdash, Dictionary and other similar games. Anyone who has ever played one of these games before should already have a very good idea of what to expect out of Inspiration. For those of you who have never played Balderdash I recommend checking out my review of Balderdash instead of rehashing everything in this review. Inspiration shares so much in common with Balderdash that it is actually quicker to point out what is different between the two games instead of detailing what the two games have in common. Ultimately there are two main differences between the games.

The biggest difference between the two games comes from the submissions that players will have to make. In Balderdash you are given a rarely known word and have to come up with your own definition for the word. Later versions have you also providing movie plots, acronyms, etc. In Inspiration you are given a word or phrase and you need to come up with a question whose answer is the word or phrase that you are given. When I first heard of this concept it felt like Balderdash meets Jeopardy. I thought it sounded really interesting as it was a unique twist on a formula that has inspired quite a few spinoffs. Having to come up with your own questions sounded like a fun little twist. I thought players would have to be clever in order to come up with good bluffs. In theory I liked the mechanic as it is similar and yet different from Balderdash.

In practice the mechanic doesn’t work as well as I expected. The biggest issue with Inspiration is that it is even harder to write responses than in Balderdash. The key to doing well in Balderdash and other similar games is to be able to replicate the answers given by the person who wrote the cards. For example in Balderdash you need to write a complete sentence that has enough detail to be believable. It also needs to be something that the other players would never think that you could come up with. Some players in Balderdash are always going to be better at the game than others. The more you play the game though the better you can become at bluffing. The problem with Inspiration is that it is really hard to replicate the responses on the card. It is considerably harder to write good believable questions than statements.

I think most of the issues come from the cards themselves. With the game being made for a museum it is not surprising that the cards are more academic than what you find in Balderdash. This creates some issues for the game as the responses are written in a way where it is really hard to replicate them. Unless you can write like an academic you are going to have a hard time masking your bluff. This kind of ruins the game as there will be rounds where it is obvious which is the correct response/question. As most of the fun in Balderdash comes from tricking players into guessing your response, it just feels like something is missing from Inspiration.

The problem gets even worse though as the cards are not consistent at all. While most are pretty academic, others are really basic. For example one of the cards in the game is Peter Parker. Maybe it is just because I would play the game with a bunch of geeks, but I can’t see a single player not knowing who he is. Therefore all of the players would submit a question related to Spider-Man. The voting period would then become a guessing game of who can guess the phrasing used on the card as all of the questions would be pretty similar. It is just weird how some cards can be so detailed/academic while others can be so basic. Ultimately I think more work could have been put into coming up with better cards.

The other main difference between Inspiration and Balderdash comes from the scoring. As I have never been a big fan of the scoring used in Balderdash, I was curious how the new scoring would work in the game. Instead of scoring points for guessing correctly and having players guess your response, players will collect and give away cards based on how they vote. I don’t exactly know what to think about the scoring as there were things that I liked and others that I did not like. The scoring puts a much bigger emphasis on guessing correctly. Guessing right helps you in two ways. First you score a point/card for yourself. Even bigger is that you avoid losing one of your cards to another player. Guessing wrong seems to be punished more in Inspiration as you both give a point to another player while losing a point yourself. This means that you will lose ground on all of the other players instead of just one like in Balderdash. This is interesting as it puts a greater emphasis on guessing correctly than just coming up with a good bluff. At the same time the reader has no chance to score points on their turn unless you use the variant rule. Ultimately in some ways Inspiration’s scoring is better and in other ways it is worse.

The components for Inspiration are pretty basic which is not surprising for a board game designed for a museum. The cards are pretty basic as they are mostly just text with a little artwork. The biggest problem with the components is that the game doesn’t come with a lot of cards for this type of game. The game has a total of 155 double sided cards with one response on each side. This means that you can play 310 rounds before you have to repeat a card. This might sound like a lot but it really isn’t as most versions of Balderdash have hundreds of cards with five responses on each card. You probably will never play the 310 rounds, but it is always better to have more cards to use.

Should You Buy Inspiration?

It is hard to deny that Inspiration shares a lot in common with Balderdash. Outside of two differences the games are exactly the same. The first difference is Inspiration requires players to submit questions instead of statements. This is an interesting idea, but it makes it quite a bit harder to write a good bluff. It doesn’t hurt that the cards can vary quite a bit from being really academic to being really basic. The other difference involves the scoring which puts a larger emphasis on guessing correctly than many other similar games. I had mixed feelings about the scoring as there were things that I liked and other things that I thought could have been better. Just like Balderdash, Inspiration is a fun party game. Unfortunately I don’t really see the point in playing Inspiration as Balderdash is better in almost every way.

If you have never been a fan of party games like Balderdash, I don’t see any reason why you would like Inspiration as it is an inferior game. If you like Balderdash the decision comes down to whether you like the idea of submitting questions as your responses. People who think the premise sounds interesting should consider picking up Inspiration if they can get a good deal on it.

If you would like to purchase Inspiration you can find it online: Amazon