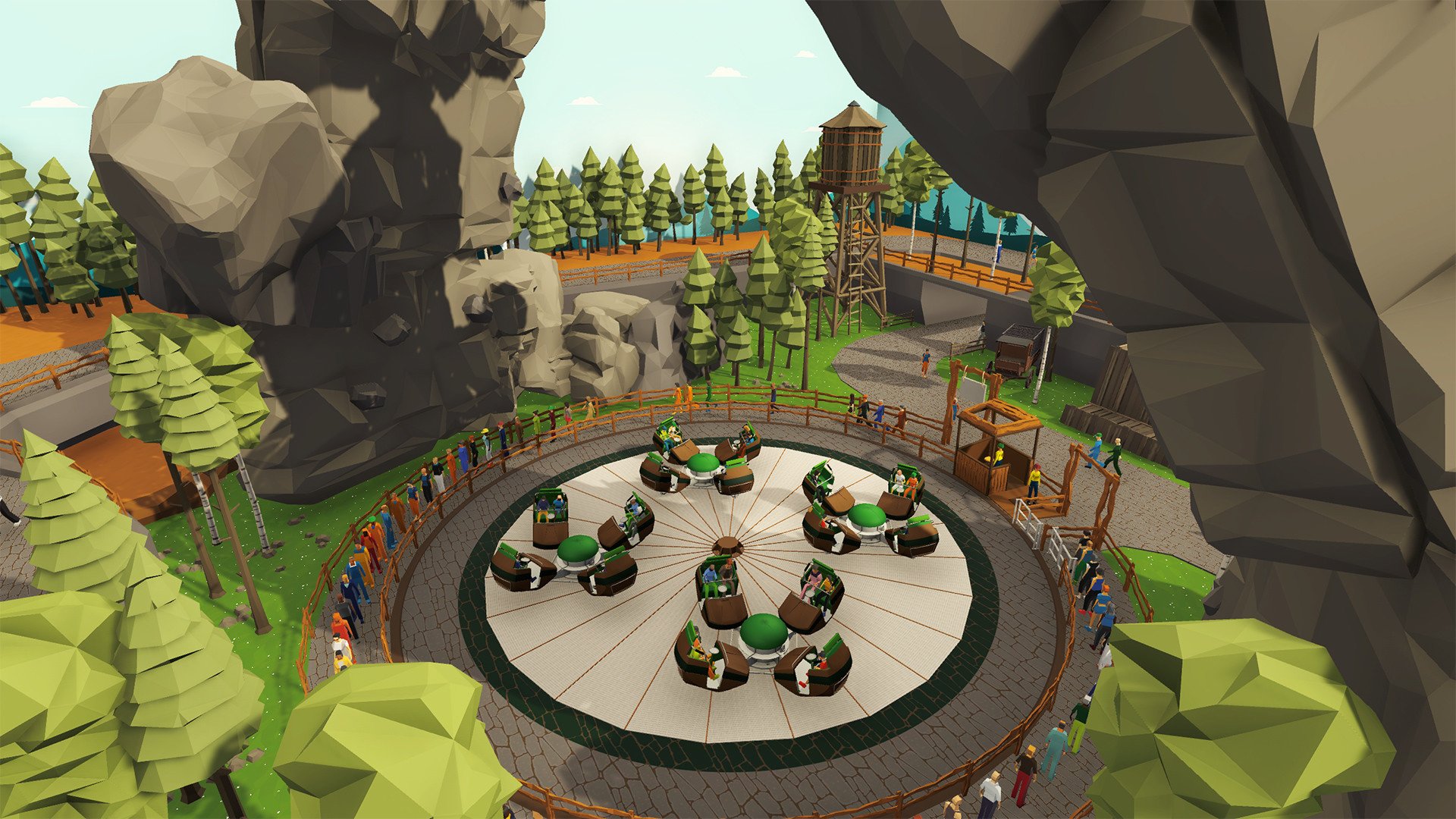 When I was a kid one of my favorite video games was the Roller Coaster Tycoon series. I have always been a fan of tycoon games and combining that with the ability to build your own theme park made for a highly addicting game. In recent years the theme park tycoon genre has come back to life in a big way with a number of well regarded games being created for the genre. Despite this I am always intrigued to check out a new game in the genre. Indoorlands is an interesting take on the genre as instead of building a traditional outdoor theme park, you are tasked with creating an indoor theme park. Indoorlands is an interesting twist on your typical theme park tycoon game which shows quite a bit of potential.

Indoorlands is a game built around creating your very own indoor theme park. You are in charge of running the everyday operations as well as expanding the park to include more shops, restaurants, and rides. There is no campaign or objectives in the game right now so the main objective is just to run a park that generates enough profit to stay open and give you money to expand. To attract more people to your park you need to give them an attractive park with enough variety to keep them interested.

Much of the gameplay is built around the buildings you place into your park. To add a ride to your park you will first build a ride hall and you can then choose which of the rides that you have unlocked that you want to add to it. The stores and restaurants are their own buildings as well. Your park consists of the buildings you place and the paths that you build that connect them together. As you generate more cash you can use it to place more buildings or even purchase more land to expand your park.

I have played a number of theme park tycoon games in the past and I have to say that Indoorlands actually played quite a bit different than the rest of them. I wouldn’t say that this is a good or bad thing. The game just feels different for some reason. I can’t exactly explain what it is, but I think this mostly comes from the emphasis on building an indoor park. Thus the construction aspect of the game is built entirely around placing different buildings. Everything is its own type of building, this even includes your employees. You don’t actually hire employees. Instead you place buildings for each task that you would normally hire employees for and those buildings will provide the service from then on. Outside of placing buildings and paths you can’t alter the outside world. This feels a little strange and different than any other game from this genre that I have played.

On the surface this might make you think that the game doesn’t have a lot of customization options. The catch is that the game actually lets you customize the inside of rides and exhibits quite a bit. You can’t change the design of the rides themselves, but you have a lot of decoration options to spruce up the inside of the halls. The number of decorative items that you have access to is quite large and you will unlock more as your park grows. The placement tools give you a lot of freedom as well. If you aren’t really into micromanaging the decorations you can also choose a blueprint which can be applied to give your buildings a unique style without taking the time to choose how you will place every little item. Decoration seems to be pretty important in the game as the overall attractiveness of your park is one of the key ways to unlock new items for your park.

Once you have completed your theming for a ride, you can admire your hard work by taking manual control of your rides. The game gives you a number of different things you can change which alters how the rides operate. In a way the game basically puts you behind the controls of the rides. This gives you the opportunity to get a first hand look at your work and helps with the overall immersion. This doesn’t really impact the success of your park, but I thought it was a nice addition.

Generally speaking I found the gameplay to be pretty fun. The game is in Early Access so it obviously isn’t perfect at the moment. The game seems to already have a good framework in place though. The basic gameplay loop is pretty similar to your typical theme park tycoon game as you use your rides to generate revenue which you then use to expand your park even further. Basically if you like this genre of games, I see no reason why you wouldn’t like Indoorlands as well. I would say that the gameplay seems a little more streamlined than some of the other games from this genre. I can see this being a positive for some people and a negative for others. If you like to fine tune every little aspect of your park, the game may not give you exactly what you are looking for. If you are just interested in trying to create a well run theme park without having to worry about all of the little things though, I could see this more streamlined approach working for you.

While I think the game does well on the micro level giving you a lot of options to customize the theming of rides and specific buildings, I think it could use a little more on the macro level. At this point there isn’t a whole lot to running the park itself. The game feels like it is focused more on the design aspect. If you are the type that will love to use the design tools to work on the theming, you will likely already really enjoy the game. If other elements of the genre are what you care most about though, those aspects could use a little work at this point. The actual park building aspect of the game is a little on the simple side at this point.

Another area where I think the game could use a little work is teaching players how to play the game. The game has a tutorial but it is minimal. You basically have to teach yourself how to play the game. The good news is that the game is not particularly complicated as you can pick up most of it just by playing around with the tools. The game is not particularly difficult at this point either since as long as you don’t expand too quickly or waste money you don’t really have to worry about running out of money. If you are patient your park will be successful and you will be able to eventually expand it.

For a game that just entered Early Access it is not surprising that the game does have a few bugs at this point. I didn’t really encounter any that were too bad. One bug that I did experience prevented me from interacting with one of my rides for a while though. The game recognized that I was selecting the ride, but it wouldn’t bring up the menu allowing me to edit it. This was a problem for a while, but I somehow must have stumbled upon how to fix it as it eventually corrected itself. You may encounter some occasional bugs like me, but the game seems to be pretty stable for a game that just entered the Early Access process.

With games from the tycoon genre that enter Early Access I am always kind of curious about the amount of content. These type of games generally succeed or fail based on their amount of content. While you can at times tell that Indoorlands is an Early Access game, at the same time the game has a solid amount of content at this point. The game is completely playable as you can build the park that you want. I will say that unlocking new items at least early on does seem to be on the slow side. The amount of time you will get out of the game right now will really depend on how much you like to customize the look of your park. If you care more about the business aspect of the genre, you may not get a ton of time out of the game at this point as a lot of the gameplay is about letting your creativity flourish as you customize the look of your park. Those that get into the theming aspect of the game could get plenty of time out of the game though.

At this point Indoorlands is not a perfect game but I think it is on the right path to becoming a fun theme park tycoon game. The basics of the game are pretty similar to your typical game from the genre. I would say that the game is a little more streamlined than some games from the genre which will probably be a positive for some people and a negative for others. While Indoorlands is similar to other theme park games, it kind of feels different as well. This is mostly due to the building focus of the game as you are building an indoor theme park. You won’t have a lot of customization options for the outside of your park, but there is quite a bit you can do to customize the inside of your buildings. Those that like to spend time working on the theming of parks will likely have a blast customizing each of their buildings. The whole running a park aspect of the game could use a little work though. The game doesn’t really have a tutorial at this point so you basically have to teach yourself, but the game is pretty straightforward where it doesn’t really matter. The game has a few minor bugs, but I generally think the game has quite a bit of content for a tycoon game that just entered Early Access.

My recommendation for Indoorlands basically comes down to your feelings toward theme park tycoon games and the premise of building an indoor park. If neither really interest you, I don’t know if Indoorlands will be for you. If the premise seems interesting to you though, I think you should consider picking up Indoorlands.