How to Play In The Dark

On a player’s turn they will drop one of their marbles into a slot on the top of the gameboard. The marble has to be dropped so the other player can see which slot you dropped it in. As all of the marbles are hidden behind a barrier, players should try to remember where they and the other player drop marbles. Play then passes to the next player. 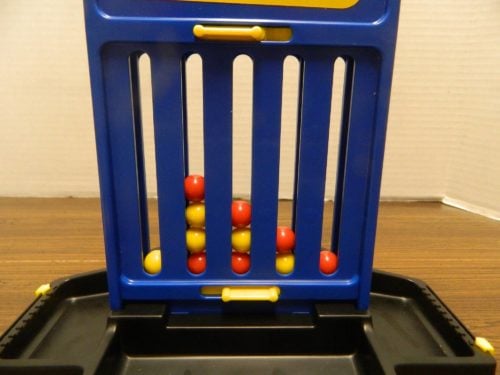 Players push the lower lever which releases all of the marbles. Each player gathers up their marbles. Both of the levers are slid to block the marbles dropped in the next round. Whoever lost the most recent round will start the next round.

The first player to score eight points wins the game.

My Thoughts on In The Dark

Instead of wasting time beating around the bush, I am just going to point out the obvious. In The Dark is basically Connect Four with a couple additional mechanics. The goal of In The Dark is pretty much the same as you are still trying to get four in a row vertically, horizontally, or diagonally. Players still take turns playing pieces trying to get four in a row while also blocking the other player from doing the same. As I am assuming almost everyone has played Connect Four or one of the many similar games before, I am not going to waste time talking about these mechanics. Instead I want to talk about the few differences between the two games.

The most obvious difference between the two games is the addition of the wall that blocks players from seeing where previous pieces have been placed. Once a piece has been placed, both players have to try to remember where it was played along with all of the previous marbles. At first this is not that big of hindrance as it is pretty easy to remember the location of both player’s marbles. This becomes quite a bit more difficult as a round progresses though. It eventually gets to the point where you have to have a very strong memory in order to remember the location of all of the marbles. At this point the game diverges from being a straight Connect Four clone into a game that mixes in quite a bit of memory as well.

Early in a round I would say that your skill in abstract games like Connect Four will determine how well you will do in the game. The strategies that work well in Connect Four should work well in In The Dark as well. Connect Four is a solved game after all so having a good strategy will really help you in the game. Players who have more experience with these type of games will have an advantage for at least the beginning of a round.

At a certain point towards the middle of the round, the game turns into more of a memory game. Unless you have a strong memory, it becomes more of a game of who can remember the placement of all of the marbles in the board. You can have a great Connect Four strategy but if you don’t remember where the marbles are located it doesn’t matter. At this point the round will likely go to the player who remembers the layout better. Unless you have a fantastic memory, you are probably best off going for a simple vertical or horizontal pattern as it will be easier to remember. If you are going to pursue this strategy, you need to make sure to occasionally place marbles in other parts of the board so the other player doesn’t notice what you are doing.

I would say that the second biggest addition to In The Dark is a side effect of the wall that blocks your view of the marbles. In normal Connect Four you can always see the discs so you can see when you have won. Thus you can call out your victory immediately. The same cannot be said for In The Dark. It is no longer obvious when you have won the round as the round does not automatically end when a player gets four in a row. A player must call out their victory in order to win. Thus in addition to knowing the location of all of the marbles, you need to know when you have won the round.

This might not sound like that big of a deal but I think it plays a pretty big role in the game. This is especially true if you are the type of player that doesn’t like to take chances. There is always a risk in ending a round. If you are right you score a point, but if you are wrong the other player automatically scores a point. You need to be pretty confident that you have won before you end the round, as otherwise you could just be helping the other player. This might not be a huge issue for players that are willing to take more risks, but I think it creates problems for risk averse players. Early in a round you can be pretty confident that you have won a round. That confidence is going to disappear later in a round though, as you aren’t going to be as confident of the placement of every marble. This could lead to risk averse players deciding to not end a round that they could have won. This happened to me once in the game.

While I don’t like this mechanic, you could make an argument that In The Dark basically had to handle the scoring in this way. There had to be some punishment for incorrectly ending the round, as once the marbles are revealed you can’t really continue the round anymore as you can see all of the marbles. I think the game should have had some way for players to score points  if neither player ended the round early but one player had gotten four in a row. A house rule I came up with, that I haven’t tested, was to reward a player who would have won, but didn’t end the round, with one point. Players, that ended the round early and had four in a row, could then receive two points as a reward for taking a risk. If the player was wrong they could then lose one or two points. I haven’t tested these rules out, but I would be curious if they would make the game more forgiving for players who don’t like to take risks.

The final change to In The Dark is that the gameboard is slightly different than Connect Four. In the original Connect Four there are seven different columns that you can insert your discs into. In The Dark reduces that number to five. While this doesn’t have a drastic impact on the gameplay, it does impact your potential strategy. You don’t have as much flexibility when placing pieces which makes it harder to win a round. In Connect Four you win a round by outsmarting your opponent. To win In The Dark you either have to trick the other player or hope they forget the locations of your discs.

While I am not a fan of the decision, I can understand the game’s logic behind it. I am guessing the main reason the game eliminated the two columns was to make it easier to remember the placement of all of the marbles. I admit that it would be pretty hard to remember all of the placements in seven different columns. The reason I don’t like the decision though is that it gets rid of a lot of the flexibility of the original game. With the gameboard only having five columns, it can become congested quickly. Strategy doesn’t play as big of role in the game since to win a round you usually just have to get lucky and have the other player forget previous placements.

I give the designers of In The Dark some credit for actually trying something new with In The Dark. At the end of the day though, I personally think it is worse than Connect Four. In The Dark is not a bad game but I didn’t like it for a couple reasons. First I have never been a huge fan of memory games as they are probably one of my least favorite genres of board games. While there are still Connect Four mechanics in the game, at the end of the day your memory skills are going to determine most rounds. The other reason is the fact that I am generally a risk averse player in board games. I wasn’t a big fan of having to risk giving the other player a point just to score points for myself.

Should You Buy In The Dark?

In The Dark is an interesting game. Basically it is Connect Four combined with a memory game. The game is played the same as Connect Four, but you need to remember where all of the pieces have been played as they are hidden once they are played. This might not sound like much but it actually changes the gameplay quite a bit. The beginning of each round still plays quite a bit like Connect Four. As you approach the middle of a round though, the game switches into more of a memory game as the player that remembers the board layout has a big advantage. The game also has a risk reward element as players have to call out when they think they won which carries a punishment if they are wrong. Finally the gameboard has two fewer columns which makes it more congested and forces you to have a stronger memory of all of the marbles that have been played.

I personally would say that I prefer Connect Four over In The Dark. If you don’t particularly like Connect Four or memory games in general, I don’t think In The Dark will really appeal to you. If you like the idea of adding a memory mechanic to Connect Four though, I think you could enjoy In The Dark. I would probably only recommend picking up the game though if you can find it for cheap.

If you would like to purchase In The Dark you can find it online: Amazon