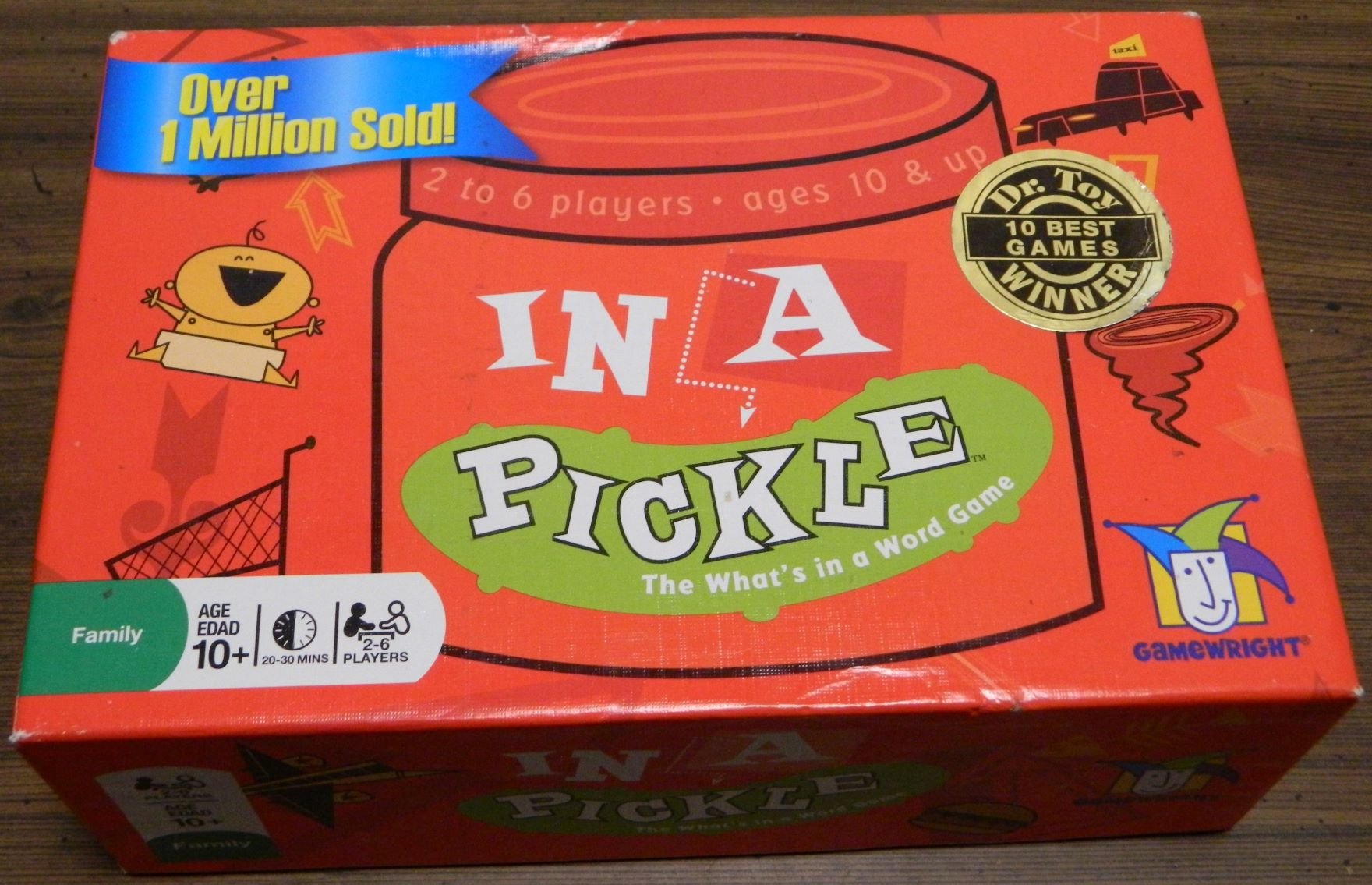 Regular readers of Geeky Hobbies will know that we are big fans of the genre of party games that was mostly kickstarted by the success of Apples to Apples. We have taken a look at a lot of these type of games over the years and we generally enjoy them at least a little even if some are considerably better than others. This brings us to today’s game In A Pickle. Originally released back in 2004 In A Pickle is a game that I have seen at rummage sales and thrift stores for a long time and never really gave it much of a thought as I assumed it was gauged more towards children. After looking into the game a little more though I was intrigued as the game’s premise of playing cards based on their item’s size was actually pretty interesting. In A Pickle has an interesting premise that had a lot of potential, but the game mostly just devolves into big argument.

How to Play In A Pickle

On a player’s turn they will look at the four rows of cards and try to find a card from their hand that either fits inside or is larger than one of the outermost cards. If the item printed on the card is larger than the item furthest from the center, the player will place the card so it overlaps the card.

You may not play cards that would have to be placed between two cards in a row.

If a player doesn’t agree with your interpretation they can challenge the card that you played. You have the opportunity to defend your play and the players can debate it. All players besides the player who played the card then vote on whether it should count. If half or more of the players vote that the card stays it will remain in the row that you played it to. If a majority of the voters disagree the card will be removed from the row, it will be discarded, and you will lose your turn.

After playing a card you will draw a new card so you have five cards left in your hand.

If a player can’t play a card or they don’t want to, they may exchange up to three cards from their hand for the same number of new cards. They will then skip their turn.

When the fourth card is added to a row it will trigger a Pickle Round.

A new card is turned up to replace the row that was removed. All players will draw cards until they have five in their hand. Play will then proceed with the player to the left of the person who started the Pickle Round.

The game ends when one of the players have won the required number of Pickle Rounds. The number of rounds that need to be won depends on the number of players:

If you want a more structured game you can choose to use the alternate rules. In the normal game you only have to relate a card to the card that it directly touches. In the alternative rules all of the cards in a row must connect and tell a type of story.

My Thoughts on In A Pickle

Before playing In A Pickle I was intrigued as the concept behind it genuinely sounded interesting. Basically the premise behind the game involves playing noun cards that would would fit inside one another. For example if the word wallet is on the table you could play a card like purse or pants on top of it as a wallet will fit inside either of those two things. At the same time if you have a card like money or coins you could play it beneath wallet as coins/money can be placed inside a wallet. Players take turns playing cards to the table to create these connections until one of the sets of cards consist of four cards. All of the players then compete to play the largest card with the player playing that card getting to take the set of cards. In order to win the game a player has to collect a certain number of sets.

As a fan of games like Apples to Apples I found this premise to be really interesting. I have played a lot of these type of party games and I have yet to play one quite like In A Pickle. The concept of a board game built around comparing the sizes of different objects was interesting. When you add in the idea of words being able to be interpreted in different ways, In A Pickle felt like one of those games that would thrive with creative groups. As my group generally likes these type of games I had higher hopes than I first expected for the game. Unfortunately I was left disappointed.

The biggest problem with the game is that due to how the rules are written the game can be really subjective. Cards based on actual items work pretty well as you can pretty easily tell which item will fit inside another item. These comparisons are usually really obvious, but some words can be used in a couple different ways which opens things up a little. The biggest culprit are the cards that feature concepts or ideas and don’t have an actual shape. How do you determine what can and can’t fit into a concept such as love? The game emphasizes using the word “in” when comparing words, but that didn’t help us all that much. The subjectivity of the cards gives players plenty of opportunities to be creative.

The problem is that these cards basically turn In A Pickle into a large argument. In the game you can match cards however you want whether the connection is obvious or not. Players are allowed to challenge any card play though. The player who played it is allowed to defend their placement. Then the players can debate and vote with a simple majority deciding whether a card counts or not. With so many subjective cards these debates can be quite lively and can lead to arguments as one player thinks a word should count while another doesn’t think it should count. This is made worse by the fact that competitive players are better off denying a card as it will benefit them. Our group in these type of games can sometimes have some heated discussions of whether a card should count or not. The arguments in In A Pickle though happened more often and were more heated mostly because there is so much subjectivity to the cards. The instructions also don’t do a good job mitigating this as they don’t do a good job clarifying what should and shouldn’t count.

For this reason if you want to get any enjoyment out of In A Pickle all of the players need to accept the fact that they can’t be too competitive in the game. Players need to not really care who ultimately wins as if they do care it will likely lead to even more arguments. In a lot of ways In A Pickle is more of a experience than a game anyway. Outside of maybe being more creative with how you use your cards there really isn’t much strategy to the game. Basically whichever player is dealt the cards with the largest items printed on them is going to win the game. To enjoy the game you need to accept that it doesn’t matter who wins as most of your enjoyment will come from having a laugh with the other players.

The other reason that In A Pickle is more of an experience than a game is the fact that the whole scoring mechanic doesn’t really work. I personally don’t like the idea of the Pickle Rounds. Players basically take a couple turns to build up a row and then have one opportunity to add the largest card to it. The problem with the Pickle Rounds is that there is no reason for players not to just keep their largest cards in their hand for these rounds as they are the only thing that ultimately matters in the game. For example if you have a card like “universe” or something similar it is going to be hard to find a card to play on top of it. Thus the player who is dealt these large cards are basically guaranteed to win a Pickle Round. No matter how creative you are you have no chance of winning if you aren’t dealt good cards. Some people have added a house rule to the Pickle Rounds where players can keep playing cards until no one can play any more cards which may help. This isn’t going to help with the reliance on luck though.

I was genuinely surprised that I didn’t enjoy In A Pickle as it seems like the type of game that would be right up my alley. Yet for some reason it just didn’t work for me. The concept behind the game is interesting though so I would be curious to see if some house rules could fix some of the problems with the game. For example I would probably not use most of the abstract cards as they just introduce problems to the game. Otherwise some rules could be tweaked in order to reduce some of the subjectivity and arguing.

While I didn’t really care for In A Pickle I could see some people enjoying it. The game is quite easy to play outside of trying to interpret what should and shouldn’t count. You could probably teach the game to most players within just a couple of minutes. The game has a recommended age of 10+, but I don’t see why younger children couldn’t enjoy the game as long as they are familiar with all of the words present in the game. In A Pickle plays quickly as I would say most games could be finished in around 15-20 minutes. Players that are looking for a game that is more of an experience that you can get some laughs out of instead of a deep game could have fun with In A Pickle.

Should You Buy In A Pickle?

Unfortunately I was kind of disappointed by In A Pickle. For a long time I had no interest in the game, but after seeing the concept behind the game it actually sounded interesting. The game seemed like the type of party game that would be right up my alley. Unfortunately in action the game let me down. The main problem with the game is that it is so subjective. Players can try to creatively use cards and some cards can only be used in this way as they are ideas/concepts instead of actual items. This leads to a lot of arguments as players will have differing opinions of what should and shouldn’t count. This combined with the fact that the Pickle Rounds are not a good way of determining a winner lead to In A Pickle feeling like more of an experience than a game. If players take the outcome of the game seriously they are unlikely to enjoy it. I am not sure why I didn’t like the game as I have enjoyed other games with similar faults. For some reason though I didn’t. I could see some people enjoying it though as it is easy and quick to play which might work well in family settings.