Husker Du? (which means “Do you remember?” in Danish) is a very simple Danish memory game that was first published in America back in 1970 (I played and am reviewing the 1994 Parker Brothers version). Since the game is primarily for young children, there aren’t a whole lot of instructions and the rules are very easy to learn. For setup, put 36 playing pieces into each of the openings on the gameboard (so they cover all of the pictures) then turn the wheel clockwise until the arrows line up with the next line on the wheel (so players can’t memorize where the pictures are located before the game even begins). 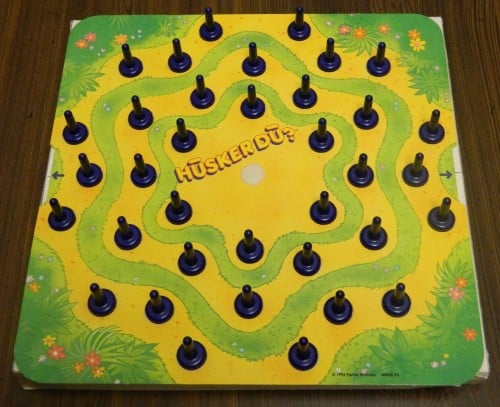 The setup in Husker Du?.

The youngest player goes first and removes two playing pieces from the gameboard. If the two pictures match (statistically very unlikely for the first few turns), they take them and try to make more matches until they fail to uncover a matching pair. If the uncovered pictures don’t match, they place the playing pieces back where they were and play passes to the next player. Players should always try to memorize the locations of the pictures that were uncovered (to help them match pictures when it is their turn). Once a player fails to find a match, play continues clockwise in the same way. Players continue trying to match pictures until all pairs have been revealed and there are no more playing pieces on the board. At the end of the game, the player who has the most playing pieces is the winner. A new game can easily be started by simply putting the playing pieces back on top of the openings and turning the wheel clockwise to the next line. There are eighteen different “boards” you can play so the pictures aren’t always in the same location each game. 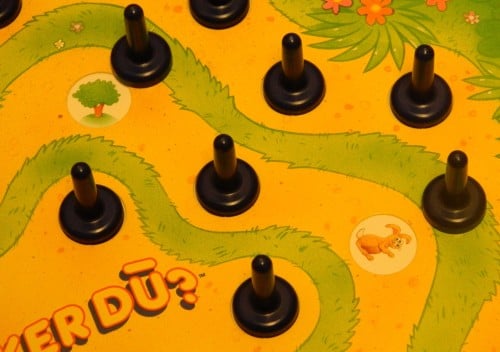 This player revealed two pictures but they don’t match. Their turn is now over and play passes to the next player. 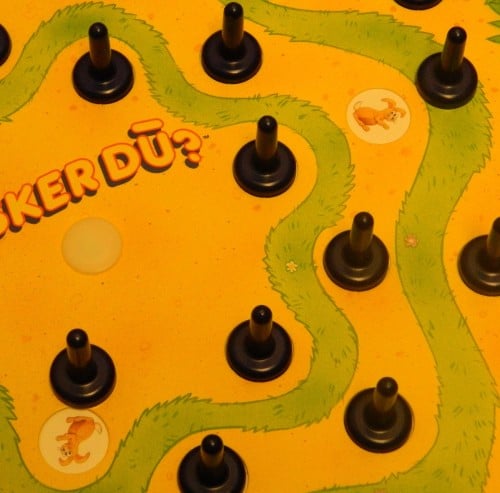 This player already knew the location of the other bunny. After the previous player revealed where the second bunny was located, they were able to match them on their turn. They will get to pick up two more playing pieces until they fail to make a match (in which case play passes to the next player).

Fun Children’s Game But Not For Adults:

Most memory games are made mainly for children and Husker Du? isn’t any different. The only adults I could see this game being good for are ones who want to keep their memory sharp (people at risk for dementia or other things that make you forgetful). While they probably won’t enjoy the game, it will definitely test their memory. As an adult, I (not surprisingly) didn’t enjoy Husker Du? and I will never play it again. However, I know I am not the target audience of a game like this. I think the main target audience (younger children) will love this game, especially since it is one of the few games that kids might actually have an advantage over their parents (because memory tends to fade with age). If I had children, I would definitely introduce them to the game since it is easy enough to learn and play (players as young as four and maybe even younger should be able to play it) and it helps them learn a pretty useful skill (memorization).

About that advantage kids have over adults, don’t be surprised if you get beat by your kids if you play this game because your memory probably isn’t as sharp as theirs. I’m embarrassed to admit that if I had kids, I have no doubt they would beat me at Husker Du?. I was even starting to get a little frustrated with the game (a game meant for four-year-olds mind you). There were multiple times where I couldn’t even remember where a picture that was just revealed two or three turns earlier was. If your memory stinks as bad as mine (or you get frustrated easily), this is not the game for you even if it is a kid’s game.

Re-Playability (But Not As Much As “Memory”):

Since Husker Du? has eighteen different “boards” you can play, the game should have nearly endless re-playability. However, games like “Memory” literally do have unlimited re-playability (since you just randomly place the tiles face down there are thousands if not millions of possibilities for where each picture is located) so Husker Du?’s fixed boards are still somewhat of a problem. While this is extremely unlikely, a player with a photographic or otherwise amazing memory could technically remember where some or all of the pictures are on each board. This would be extremely difficult, but it is technically possible (especially if you play the game a lot and begin to learn the different boards really well).

I probably shouldn’t even be analyzing game mechanics for a children’s game (they don’t really matter that much, as long as the kids are having fun who cares) but I can’t help myself. Husker Du? has a few somewhat serious issues in terms of mechanics, but they are problems that are prevalent in all memory games. The biggest problem is that obviously it becomes easier and easier to match pictures in the mid and endgame. Since players are allowed to keep going until they fail to match pictures, this means that most likely one player will clear the board (probably at least the last three, four, or even more matches) and that player will probably win the game because of it. This means that turn order matters significantly in Husker Du?. If you get control of the board in the endgame and you have even just a decent memory, you will probably win (unless you really stunk up the joint earlier in the game). If you are the last player to fail to match in the mid-game, you almost certainly won’t get another chance to match for the rest of the game (the other two or three players will probably match all of the remaining pictures) unless you are playing one on one of course. This means that you can dominate the early game but if don’t get a chance to match in the endgame, you most likely won’t win.

Also, there is a lot of luck involved with which pictures are revealed when. In the early game, if you have a decent memory you can get a lot of easy matches if players just happen to turn over a picture that matches one revealed earlier on the second choice of their turn. Whoever the next player is has a very good chance of making a match, just because the other player was unfortunate enough to turn it over as their second choice instead of their first pick. The thing is, neither of these two problems can really be solved (although the endgame one could be minimized by limiting players to only one match per turn), they are just problems that memory games will always have.

I played and am reviewing the 1994 Parker Brothers version of Husker Du?. This edition has decent artwork and components but neither are really anything special. Kids will probably enjoy the art but it certainly isn’t amazing. The components do their job but aren’t anything special. In our game, we did have a few times where a player accidentally knocked down a playing piece, revealing what was underneath them. It isn’t a big deal but this is something that might happen from time to time in your game. The wheel would also sometimes spin just a bit, forcing us to have to adjust it so the pictures wouldn’t be off-center.

While I am giving Husker Du? just one-and-a-half stars, I grade games based on what I think an average gamer would think about it. While Husker Du? is easily a three star game (or better) for young children (and I recommend it for them), it just doesn’t appeal to a wide of enough audience to warrant a better score. Add in the problematic game mechanics, less re-playability than “Memory,” and just okay components and I think that is a fair grade. Recommended for young children, not recommended for anyone else (though it could be useful for adults at risk for memory loss).

As a grandmother who raised her grandson who is now 31 yrs. old I must say that he actually asked for this game for his son since we enjoyed it so much when he was young. This game is fun for many ages. This game was also one that my children owned. I do agree that it is not a "just for adult" game however it is a perfect game for an adult and child to enjoy together. The art of games that take interaction among "people" is becoming such a lost art and by not making these games anymore you are just adding to the problem. Soon all games will be "single user" only.. and that is very very sad.. Children learn from interaction with adults so why is everyone trying to stop any of that? Keep the older games on the market and you will find people DO buy them and miss them..

I totally understand your feelings about Husker Du. Everyone has board games that they enjoyed when they where children or that they played with their children/grandchildren. The nostalgia factor is totally real for board games. There are games that I played when I was a kid that I enjoy a lot more than people who never played the game when they were a kid. Unfortunately I never played Husker Du as a kid so I didn't have any nostalgia for the game. Add in the fact that I have never been a big fan of memory games and I just didn't really like Husker Du. I totally understand why you like the game though.

On your second point I totally agree. I think more people should play board game with their kids. Board game publishers do occasionally bring back some classic board games. There hasn't been a new version of Husker Du since 2009 though. Another really good thing is that board game designers are putting in a lot of effort making new board games that appeal to both children and adults. For a list of games that are enjoyable for the whole family I would highly recommend checking out games that won and were nominated for the Spiel Des Jahres as they usually do a really good job picking games that work well for the whole family. They even pick nominees and a winner that specifically only includes children's games.