Regular readers of Geeky Hobbies will likely already know that I have a soft spot for simple card games. Even if they don’t contain much strategy, a simple card game that you don’t have to put too much thought into can be fun in the right groups. First released back in 2020 Something Wild! is a series of card games released by Funko Games which utilize many of the franchises that the company has access to. While I didn’t know much about the game, I was hoping that it would capture the magic of a game like UNO and create a fun little card game. Something Wild! may not be the deepest card game, but it has more strategy than I was expecting and was a pleasant surprise.

How to Play Something Wild!

Note: While this review was based off of playing Something Wild! Villains, these rules apply to all versions of the game as the rules don’t change between the games.

On your turn you will take six different actions:

This player has played a red card. As this matches the color of the Power card in the middle of the table, the player will get to take the figure and use a power on their turn.

Whenever you have the figure in front of you, you will have the opportunity to use the character’s power to help you in the game. You may use a Power once per turn. You can use a Power card you collected at a previous point in the game, or the Power card that currently is face up in the middle of the table. 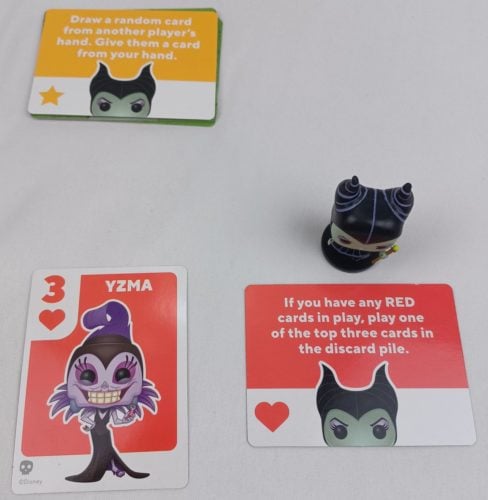 You may choose not to use a Power even if you currently have the figure.

The objective of Something Wild! is to create sets and runs among the cards you play in front of you.

A set is three cards of the same number. Color does not matter.

This player has a blue, purple, and yellow one card in front of them. They have created a set.

This player has the red two, three, and four in front of them. They have created a run.

Once you have created a run or set in front of you, you will discard the cards. You will then take the top Power card from the center of the table and place it face up in front of you. This card will count as one point, and you will be the only player who can use this Power throughout the rest of the game.

The top card from the Power deck is then flipped over.

You do not have to control the figure in order to score and take a Power card.

The first person to acquire their third Power card wins the game. 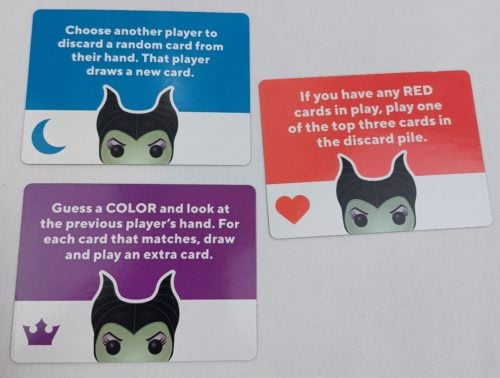 This player has collected three Power Cards so they have won the game.

Combining Multiple Something Wild! Games Together

If you acquire several different versions of Something Wild! you can combine them together.

All of the Characters cards are shuffled together to form a draw pile.

The Power cards are separated by character. When you play a card that matches the color of a Power card, you will only take the associated figure. If you can take multiple figures, you will choose one to take.

When using Powers you can only use Powers associated with character(s) that you have a figure for.

When you score you can choose the top Power card from any of the piles.

My Thoughts Something Wild!

When I first picked up Something Wild! I assumed it was going to be similar to a card game like UNO. While it is a simple card game, it actually doesn’t share much in common with UNO. In fact I would say that it shares a lot more in common with a set collecting game such as Rummy.

Anyone who has played Rummy or a similar game before should already be pretty familiar with how the game is played. The basic goal of the game is to create sets (three cards of the same number) or runs (three cards in numerical order of the same color) in order to score points. Basically you want to acquire cards of the same number or in numerical order. The first player to score three sets/runs wins the game.

Heading into the game I expected Something Wild! to be a simple card game that was easy to play where the whole family could enjoy it. In this regard the game met my expectations. I would guess that most new players could be taught the game in just a couple of minutes. Nothing about the gameplay is particularly difficult as long as you have basic counting/number skills. Some of the power cards have some text to read so you need some basic reading skills as well, but otherwise the game is a breeze to play. The game has a recommended age of 6+ which seems about right. With some help reading the cards, I could see kids even a little younger being able to the play the game.

The game’s simplicity leads to the game playing rather quickly. The length of games will vary some due to how lucky players are with getting the cards that they need. Unless the players get really unlucky though, I would guess that most games will take at most 15-20 minutes. This makes it a great filler game to play between more difficult games, or a game that you can play if you don’t have a lot of free time. With the short length I could easily see playing a rematch or two as well.

At this point I would say that Something Wild! shares a lot in common with most simple and straightforward card games. If you generally prefer games filled with strategy, the game is unlikely going to be for you. There is something compelling about a good card game that is straight to the point. It is refreshing to sometimes play a card game where you don’t have to analyze every single decision to death. Your decision on any given turn should be really easy where you can make a decision quickly and you won’t worry that you made the wrong decision.

If this was all that Something Wild! had to offer it would be a solid card game. What really takes the game to the next level though is the addition of the Powers that you can utilize throughout the game. The Powers affect one specific number of the Character cards as well as all of the Power cards for the set’s main character. These powers add strategy to the game as well as give players more control over their fate. These powers can vary in strength, but if you use them right you can turn your game around quickly. The powers are generally pretty straightforward, but they really make the game in my opinion.

This element of the game really feels like it was taken from a more complicated card game. Without the powers the game still would be enjoyable enough, but the powers really take the entire game to another level. I thought Something Wild! was going to be a very solid card game, but it ended up being considerably more where I was genuinely surprised by it. Most cheaper card games made for a broad audience rarely break past mediocrity. Something Wild! is genuinely a good game as long as you don’t mind that it isn’t stuffed to the brim with strategy.

The game is going to rely on luck like every card game. The cards you draw will play a pretty big role in how well you will do. If you don’t draw the right cards, you simply can’t win. Some of the powers kind of feel rigged as well where acquiring it for yourself will make it much easier to win the game. The game has more strategy to it than I initially expected though. This mostly comes from the Powers as it gives you a way to twist the game in your favor. Smart use of the Powers can make a big difference in the ultimate outcome. Something Wild! does a good job remaining simple enough for a more general audience, while also including a little something else to attract someone who doesn’t typically play simple card games.

One thing that I found really intriguing about the game as well was the fact that Funko Games is already starting to turn the game into a franchise. The first sets of Something Wild! were released in 2020, and the series already has fourteen different sets. Each of these sets are based around a popular franchise which is not surprising as it is made by Funko. In addition of being able to choose a set with a theme that you like, the number of sets really opens up the future of the game.

What is unique about Something Wild! is that all of the sets can be combined together to create a more complex game. While the set and run gameplay doesn’t really change, the more sets you add to the game increases your opportunities. There will be more Powers in play which gives players even more options. This might seem like a gimmick, but I actually think having multiple sets will impact the actual gameplay. Each set in the game has different powers and emphasizes different things. For example the Villains set I used for this review seems to be focused on messing with other players as you can take cards from them. Other sets have different emphases. Adding several of these sets together will create a unique experience.

As for the game’s components there were things that I liked and others that I think could have been better. The cards are a little hit or miss. I really like the artwork/card design. The card quality is okay, but also feels a little off. Being a Funko game it should come as no surprise that each game comes with its own mini figure. The figures included with each game are quite small. They also don’t serve a huge purpose in the game. They look really nice though and add charm to the game. As the game’s only originally retail for $9, there really isn’t much to complain about as you get quite a bit for your money.

Should You Buy Something Wild?

Heading into playing Something Wild! I didn’t know exactly what to expect from the game. I thought it was going to be a solid card game, but I didn’t know if it was going to be anything more. I have to admit that Something Wild! kind of surprised me. The game likely won’t be for everyone as it isn’t packed with strategy. The game does a really good job finding a balance between simplicity and strategy though. The game can be taught in minutes and plays quickly. There is strategy to the game though as how you use the powers can have a pretty big impact on how well you do. The game still relies on a decent amount of luck, but it isn’t meant to be a game that you take too seriously.

If you have never really cared for simple Rummy style card games, Something Wild! likely won’t be for you. If you are looking for an interesting new card game that the whole family can enjoy though, I would highly recommend looking into picking up Something Wild!.