With Poker being one of the most popular card games of all time there have been quite a few games that have tried to add their own twist on the formula. Most of these games either tweak the deck of cards or the scoring. Today’s game High Hand tweaks how you acquire cards by adding in a gameboard and an abstract strategy mechanic for movement. It even includes a partner mechanic. While the concept was kind of intriguing, the game’s boring box design left me with the feeling that it was going to be another really generic card game. High Hand can be summed up as Poker played on a gameboard but it actually succeeds at adding some interesting new ideas to Poker.

How to Play High Hand 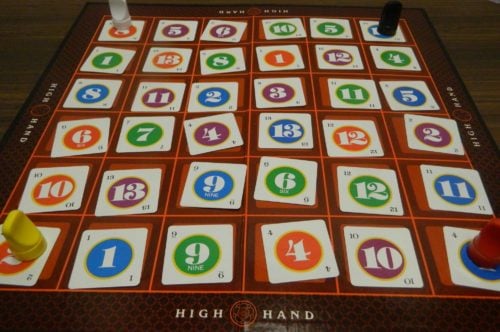 A game of High Hand consists of five rounds. In each round players are trying to acquire cards to form their best hand. 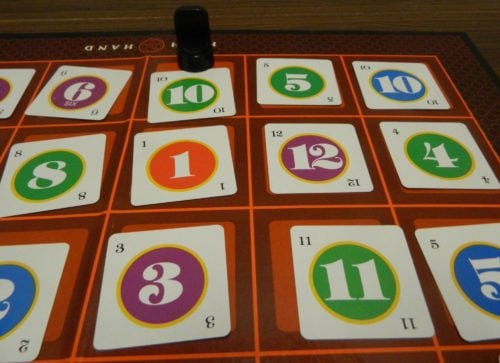 The black pawn has stopped on the green ten card. The player will take the card and place it face up in front of them.

While moving a player cannot move to a space occupied by another pawn or jump over another pawn. If a pawn is blocked in a way where it cannot move at all, the player loses their turn. 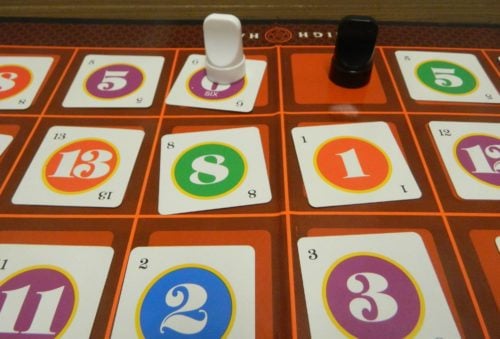 As the black pawn is in the way, the white pawn could not move any further right.

After moving their pawn, the next player clockwise takes their turn.

The round can end in one of two ways: one team concedes the round or all of the cards have been taken from the gameboard.

Each player chooses five of their cards to form their best hand. Partners can’t share their cards with their partner. The player who forms the highest ranked hand will win the round. The rank of the different hands are as follows along with the tiebreakers if two players have the same hand: 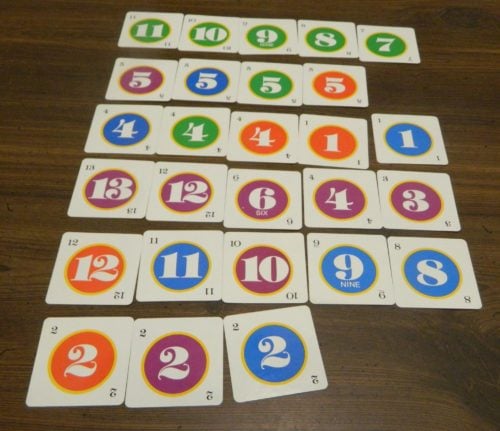 Here are some ranks of hands you can form in High Hand with the top row being the most valuable. 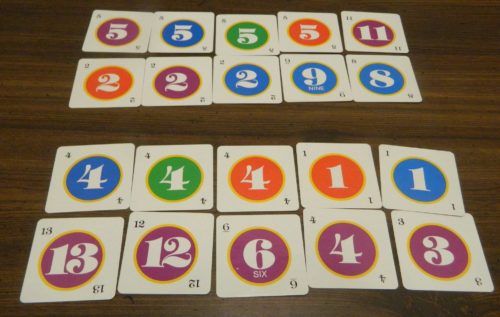 If this wasn’t the fifth round, another round is played. The cards are reshuffled and placed on the gameboard. The teams are also reset so the players can form different teams in the next round.

After five rounds have been played, the player who has scored the most points wins the game.

For two player games you will follow all of the previous rules with the following additions:

My Thoughts on High Hand

I began this review saying that High Hand is basically Poker with a gameboard mechanic added in. I made this comparison since High Hand is what you would get if you used a gameboard to choose your cards in Poker. As everyone has either played Poker or are at least familiar with the game, I am not going to really talk about that aspect of the game. You basically try to collect a group of cards of the same number, color or a straight. Instead of talking about Poker I want to talk about what is unique in High Hand.

By far the distinguishing mechanic in High Hand is the gameboard. Before each round all of the cards for the round are placed on a 6 x 6 grid. Each players’ pawn starts in one of the corners and players take turns moving around the board claiming the card that their pawn lands on. As players can move as many spaces as they want in one direction but can’t move through another player’s pawn, the gameboard adds an interesting abstract strategy mechanic to High Hand. As all of the cards for the round are placed face up on the table, players can decide what hand they are going to try to acquire before the round even starts. The goal is to find the most efficient path to acquire all of those cards while avoiding the other players’ pawns. It is unlikely that you will get all of the cards that you want though so you will have to be willing to change up your strategy whenever a player takes one of the cards that you want.

Before playing High Hand I thought it was going to be another very generic card game that was ultimately going to be pretty dull. I was actually pleasantly surprised by High Hand mostly due to the gameboard mechanics. While the mechanics are really simple they actually add a surprising amount to Poker. There is actually a decent amount of strategy in planning out your moves in order to get the cards you want before someone else takes them. In order to maximize each turn you need to plan ahead as you are able to move as many spaces as you want in one direction. If you know what cards other players want you can also make moves to get in their way preventing them from getting the cards they want. While High Hand is not a highly strategic game, it has more strategy than I expected.

Other than the board mechanics, the other unique thing about High Hand is the fact that it has a partnership mechanic if there are four players. Basically the partnership mechanic gives a player that isn’t going to win a round a chance to score some points by helping another player improve their hand. While the scoring portion of the partners mechanic has issues which I will get to shortly, adding a partnership mechanic to Poker is an interesting idea. The decision to basically forfeit the round and choose a partner is really important to your success in the game. You don’t want to make the decision too early where the player you choose doesn’t actually win but you also don’t want to wait too long and lose the partner you want. After partners are chosen the gameboard mechanics become more interesting. As two players are now working as a team, the two players can work together and use one player’s piece as a blocker to help their teammate get the cards that they need. This can actually add some interesting strategic decisions to the game.

At this point I am going to admit that we slightly misplayed High Hand when my group played the game. Our slight error was that when players took a card they kept them in their hand so the other players couldn’t see them. While we technically misplayed the game, I honestly think our error improved High Hand. If you play the game with your cards visible to all of the other players, everyone can see what you are trying to collect. If you start collecting a bunch of the same number or a bunch of cards in a row, the other players are going to notice pretty quickly. This should lead to players regularly stealing cards that other players need to complete their chosen hand. If a player forms a strong hand, someone will quickly claim them as their teammate. Playing by the official rules will lead to more of a defensive game as players prevent the other players from forming strong hands.

While I actually enjoyed High Hand considerably more than I expected, the game is far from perfect.

As I briefly mentioned earlier, I think the scoring system in High Hand has some issues. I actually don’t mind that players score a set number of points for either having the best hand or being their partner. This makes the scoring really simple as you don’t score a different amount of points for forming different types of hands. The problem is that I see no reason why a team should be punished just because they weren’t picked. A player shouldn’t score half as many points for having the best hand just because one of the players choose another player. You end up scoring just as many points picking the winning player than actually having the winning hand and not being chosen. There is no reason that the player with the best hand shouldn’t score 100 points while their partner scores 50 points. With how messed up the scoring system is, in the game I played one player was guaranteed at least a tie no matter what happened in the last round. They could just pick their partner at the beginning of the round which guaranteed that the most points any player could gain on them would be 50 points. Thus there was no reason to even play the last round.

The biggest problem with High Hand though is the fact that you don’t really even need the actual game. The game comes with the gameboard, 52 cards, and four playing pieces. The contents themselves are nothing special. They are kind of bland and feel a little cheap. The main reason why I say that you don’t really need the actual game is that you can easily make your own version with just a deck of standard playing cards and four pawns. A standard deck of playing cards will work fine as the face cards will stand in for the higher numbers from High Hand. If you want to create your own gameboard you just need to make a 6 x 6 grid large enough to fit the cards. You don’t really even need the gameboard as you can just lay the cards out in a 6 x 6 grid. Unless you can find High Hand for cheap, you can save money and space by just using a standard deck of playing cards.

The final issue with the game is that it just isn’t going to appeal to everyone. While I thought the gameboard mechanics were interesting, they aren’t enough if you don’t like Poker. You basically are playing Poker with the betting mechanics being replaced with a gameboard. As Poker is still a major portion of the game, I can’t see you enjoying High Hand if you don’t like Poker. At the same time if you mostly like poker for the betting mechanics, I also think High Hand might not be for you as they play no role in High Hand.

Should You Buy High Hand?

Before playing High Hand I expected it to be another very generic game where you tried to form the best Poker hand. While the Poker mechanics are far from original, High Hand actually surprised me. The mechanics involving the gameboard actually utilize a decent amount of strategy. You need to plan out your moves in advance to get all of the cards you want and you can also use your pawn to block the other players from getting the cards they want. The game also adds an interesting partner mechanic to Poker which allows players to work together in order to maximize one of the player’s hands. While High Hand surprised me, it is not going to appeal to people that don’t like Poker or the idea of adding a gameboard to Poker. The scoring could also use some work. Finally you could easily make your own version of the game with just a standard deck of playing cards and four pawns.

If you don’t like Poker or don’t think the gameboard mechanics sound that interesting, High Hand is probably not going to be for you. If the game’s premise sounds interesting to you though, I think you might be surprised by High Hand. Due to the fact that you could easily make your own version though, I would probably only recommend picking up High Hand if you can get a good deal on it.

If you would like to purchase High Hand you can find it online: Amazon