One of my favorite movie genres is the heist movie. Between the Robin Hood theme of stealing from the rich to the elaborate plans, it is really hard to beat a good heist movie in my opinion. The idea of attempting a heist isn’t something that naturally comes to mind when you think of board games though. A lot of this has to do with the theme relying on fast paced action and elaborate planning which doesn’t necessarily translate all that well to mostly turn based gameplay. Because of my love for heist movies though I am always intrigued to check out a board game that utilizes the theme. This brings me to today’s game Heist: One Team, One Mission which takes the heist theme and combines it with an electronic component and cooperative game elements. Heist: One Team, One Mission is not a game that you are going to play for hours at a time, but it is a surprisingly enjoyable little speed cooperative game that most people should enjoy.

How to Play Heist: One Team, One Mission

Get: When a player/role is told to get a specific tool, the tool is either moved from the middle of the table or from another player to the player who is playing the role indicated. For example if the game says “Money Man, get the laptop”, the laptop tool is moved in front of the player playing as the Money Man. 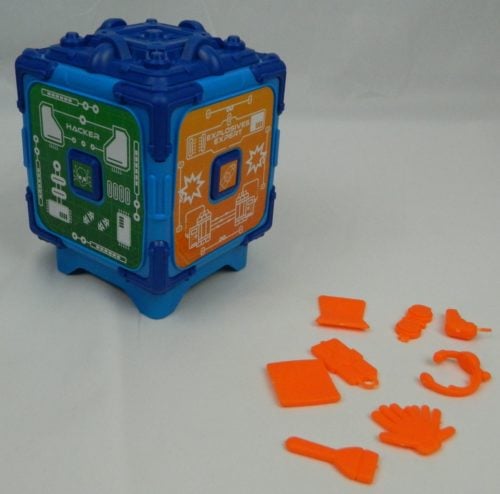 The game gave the command of “Hacker get the flashlight”. The player who is playing the Hacker role will have to grab the orange plastic flashlight and place it in front of themselves. 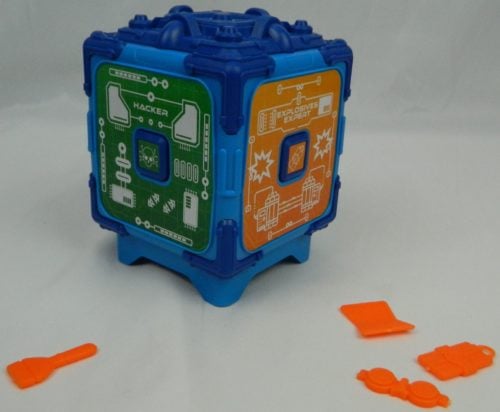 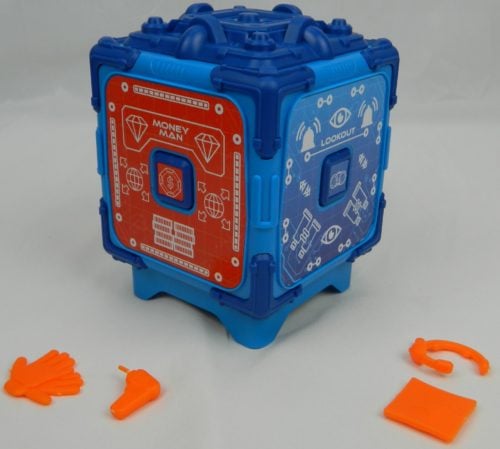 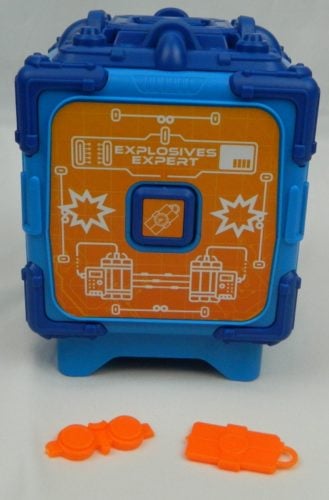 Everybody Press Your Buttons: When this command is given everyone will have to press their buttons quickly at the same time. 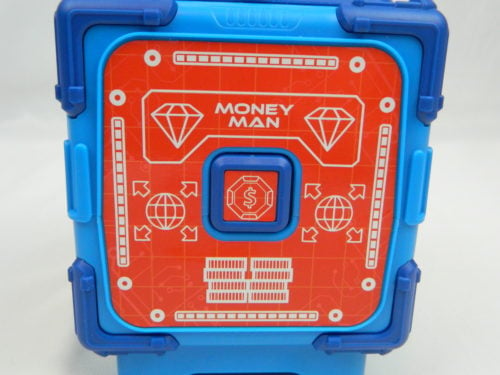 Grab: After a player(s) successfully completes a Use or Everybody Press Your Buttons command, the game unit will tell the Money Man to take a specific amount of money. The player who took this role will take the corresponding amount of money and add it to the team’s stash.

Change Roles (This command is only in the bonus level): When this command is given each of the players will get up and move one position clockwise. Thus each player will be given a new role.

If a player fails to press their button in time or the wrong player presses their button for a given command, the team will incur a mistake. If a team incurs a mistake they won’t receive all $50 million, but the game will continue. The team will get a number of allowed mistakes depending on the difficulty level chosen. For level one the team is allowed three mistakes. The other levels give players two mistakes. When the team makes more mistakes than allowed, the game will end with the players losing and police sirens will sound.

If the team is able to make it through the entire sequence making less then the allowed number of mistakes they will win the game. The top of the safe will open up releasing the gold bars. The game unit will announce if you successfully collected all $50 million or if you came up short. Collecting all $50 million constitutes playing a perfect game. 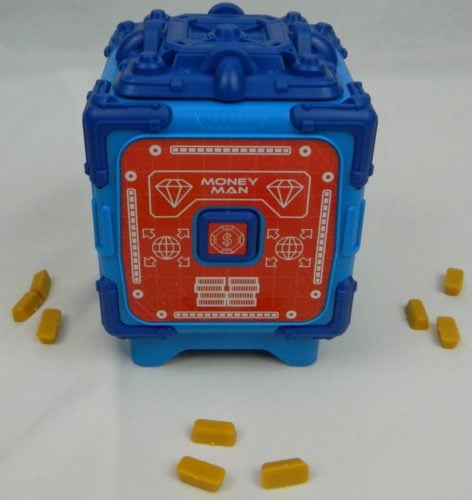 If the team completes level five without making any mistakes, they will unlock the bonus level. This bonus level is more difficult and adds the Change Roles command to the game.

My Thoughts on Heist: One Team, One Mission

Before reading the rules for Heist: One Team, One Mission I was curious how the game would actually play. The heist theme doesn’t naturally fit a board game as it is hard to simulate the action and suspense of a heist in a turn based board game. It turns out that Heist: One Team, One Mission actually takes a lot of inspiration from the line of electronic board games released mostly during the 1990s and 2000s. In particular it feels a lot like the Bop-It and Simon line of games.

Basically the gameplay boils down to all of the players working together to try and follow the directions that are given to them. Most of these commands involve passing plastic tools between the players. Technically you don’t have to pass the plastic tools as the game has no knowledge of whether you do or don’t. The tools are mostly passed so players can keep track of what tools each player currently has access to. The game tests if you are passing the tools by periodically giving you a check to see if the tools are in the right position by forcing players to press buttons. If you followed the directions or have a really good memory all of the players will know what tools they have access to which allows them to press their button when a certain tool needs to be used. The game tests your ability to follow directions as the right player has to press their button and they have to do it quickly or the team incurs a penalty. If a team completes the heist without incurring too many penalties, the team successfully completes the heist and is rewarded with the gold spilling out of the safe.

One of the things that initially intrigued me about Heist: One Team, One Mission was the theme. Honestly the theme is not a big deal in the game. Passing tools between players doesn’t really simulate a heist. The speed and tension elements are somewhat replicated by the game, but I wouldn’t say that the game does a great job replicating the feeling of robbing a bank. I will say that when you successfully complete a mission and the gold falls out of the safe it is quite satisfying. This really serves no gameplay purpose, but it is a nice addition to help support the theme.

While the theming is a little disappointing, I still thought Heist: One Team, One Mission was a fun little game. The gameplay is not particularly deep as it basically entails passing tools around and pressing buttons, but I still found it to be pretty enjoyable. I think the gameplay works because of the speed elements and the tension that the game creates. This obviously depends on the difficulty level that you choose, but the game does a good job forcing you to keep moving as you need to keep up with the commands or you will make mistakes. As you make it closer to the end of the heist the music that the game plays also raises the tension and the top of the safe starts to rise letting you know that you are getting close to finishing the mission. Passing around tools and pressing buttons by itself might not sound all that interesting, but when you add in the speed elements it becomes quite a bit more engaging.

As you are just passing around tools and pressing buttons, Heist: One Team, One Mission is not a particularly difficult game to pick up and play. It may take a couple of minutes to explain the overall goal of the game and the basic rules. Players should then be able to just jump into the game. If you can follow basic commands there really isn’t anything too difficult about the game. Because of this the game should work quite well as a family game. The game has a recommended age of 7+ but I could see younger children playing the game as long as they can follow directions and won’t put the small plastic pieces in their mouth. I would say that the game is gauged more towards families, but adults should enjoy the game on their own as long as they don’t take the game too seriously.

Generally I think Heist: One Team, One Mission does a solid job creating an experience that can be adapted to the players’ skill levels. I will say that the first couple of difficulty levels are pretty easy. Outside of playing an introductory game for new players or playing with younger children, I don’t see much point in playing the lowest difficulties as you should fly through them with no difficulty. The difficulty does rise as you progress through the levels though. The difficulty mostly comes from commands being given quicker and the players having less time to react before they incur a mistake. After a couple of games my group was able to beat the higher difficulty levels, but we did make some mistakes. I don’t see the highest difficulty levels being something that will take forever to finally beat, but they bring enough challenge where you should still feel challenged even if you are really good at the game.

Another strength of the game is that each mission is quite short. I didn’t time how long each attempt takes, but I would guess that they only take around five minutes. I would have maybe made them a little longer to make the game a little more challenging, but I think the length is pretty good for the game. The short length allows you to easily play several games back to back, and when you fail you don’t lose too much time. The short length also makes it a great filler game. If you either don’t have a lot of time or want a break between more complicated games, you can do a lot worse than Heist: One Team, One Mission.

As for the game’s components, I liked some things and thought others could have been better. For the most part I really liked the electronic component. The sound elements work well to keep up the tension and keep the game interesting. As I mentioned earlier I also really liked how the safe drops out the gold when you are successful. You need to be careful not to lose any of the gold pieces though. As for the tools I thought they were fine, but nothing special either. Most of the tools are detailed enough, but it may take a game or two to know what some of the tools are. Otherwise the box is probably a little bigger than it needed to be as there is a decent amount of empty space in the box.

Should You Buy Heist: One Team, One Mission?

The heist theme is what initially intrigued me about Heist: One Team, One Mission as who wouldn’t want to play a board game where you are trying to complete a heist. I will say that I was a little disappointed by the theme as the gameplay doesn’t really make you feel like you are robbing a safe. Despite this the game is still pretty fun. The gameplay mostly revolves around following the commands given by the game unit passing tools between the players and pressing buttons at certain times. The gameplay is really simple which makes the game something that everyone can enjoy. The gameplay is still pretty fun though as the game does a good job creating tension through the speed elements. It also plays quickly which makes it a good filler game. I will say though that it isn’t the type of game that you will want to play for long stretches of time.

Get A Grip: The No Thumbs Challenge Game Board Game Review and Rules
Click here to cancel reply.