Originally released as a phone app, Heads Up! became quite popular after being featured on the Ellen Degeneres Show. This popularity ultimately lead to the game receiving its own board game adaptation which I am looking at today. I have to admit that I didn’t have high expectations for the game. On the surface the game looked like your typical collection of public domain party games that utilize the wear the card on your head mechanic from games like Headbanz. The game features four different categories of cards but they all basically boil down to the players giving clues to the player with the card on their head to try and get them to guess the word/phrase on their head. As I have played quite a few of these type of games in the past I didn’t really expect the game to bring anything new to the table. The only reason I picked it up was because I see it all of the time at thrift stores and eventually found it for really cheap so it was finally worth checking out. The Heads Up! Party Game brings together some classic party games that fans may enjoy even if it doesn’t really bring anything new to the table.

How to Play Heads Up! Party Game

Each player will begin their turn by drawing six cards from the current category and placing them in their headband facing the other players. The current guesser cannot look at these cards at any time.

When the current guesser is ready they will flip over the timer and their turn will begin. All of the clue givers will then start to give clues to the current player for the words/phrases printed on their card. The clues that they can give the player depend on the current category. They will begin with the top word/phrase on the card.

If the current guesser gets it right or the players skip they will move onto the second word/phrase on the card. If a player ever gives an illegal clue the players are forced to skip to the next word/phrase. When both words/phrases have been guessed or passed on a card the player will remove their top card to reveal the card below. This will continue until the timer runs out.

At the end of a guessing player’s turn they will receive one (normal play) or two (challenge play) chip(s) for each word/phase they guessed correctly. 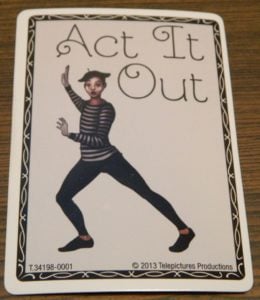 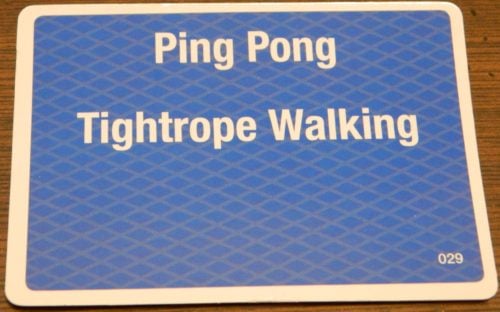 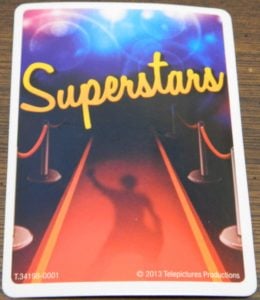 Each card in the category will feature the names of celebrities. In the basic game the clue givers try to describe the celebrity without using any part of their name or using rhymes. In challenge play the clue givers also can’t use any other celebrity names while describing the person on the card. 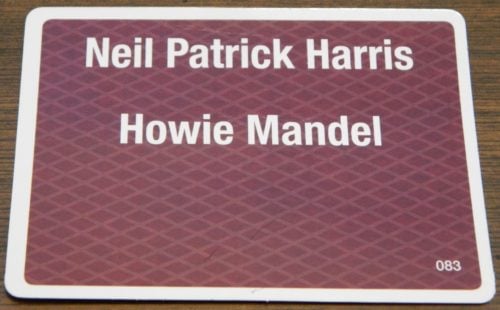 To begin the player(s) will describe Neil Patrick Harris. They could say “an actor who played Doogie Howser and Barney Stintson”. They will then move onto Howie Mandel. They could say “the host of Deal or No Deal”. 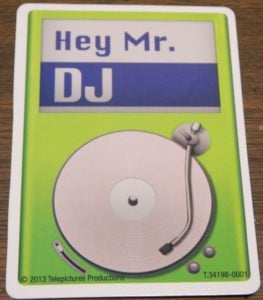 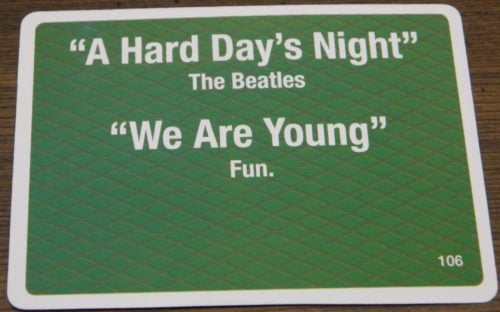 For this card the player(s) will begin by humming “A Hard Day’s Night”. After the guesser gets it or the player(s) pass they will hum “We Are Young”. 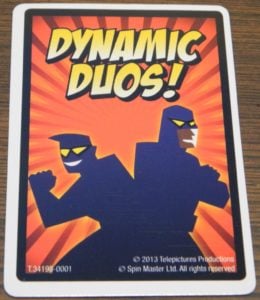 In this category each phrase features two things connected by the word “and”. These phrases are two things that are commonly associated with one another. The clue givers may not use the words/names on the cards and they may not rhyme. In challenge play the clue givers have to describe the pair in five or less words. 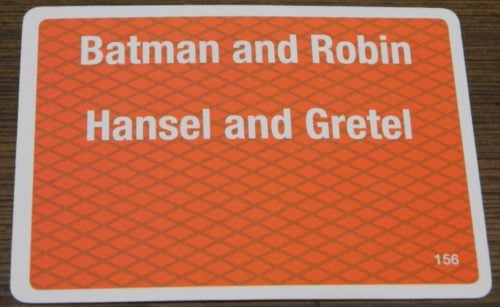 The player(s) will begin by trying to describe Batman and Robin. For example they could say “a pair of crime fighters who fight the Joker”. The player(s) will then have to move onto Hansel and Gretel. They could describe them by saying “characters from a classic children’s book who encounter a house made of candy”.

The game ends when all of the chips have been taken. The player who collected the most chips will win the game.

The team mode plays basically the same as the main game except that the players break into two teams. In this mode the teams will take turns and only members of the current team can give clues. Players will take turns between being clue givers and the guesser.

The team that collects the most chips will win the game.

My Thoughts on Heads Up! Party Game

I didn’t have high expectations for The Heads Up! Party Game as I thought it was basically a collection of public domain party games combined with a Headbanz component. After playing the game that is exactly what it is. The game features four different categories of cards of which all of them can basically be traced back to another game. Act It Out is clearly Charades. Hey Mr. DJ plays like Name That Tune or any other game where you have to guess a song title based on part of the song being hummed. The Superstars and Dynamic Duos! categories are your generic party games where players describe something to try and get their partner(s) to guess what it is. I honestly did not find a single thing that was significantly different than your typical party game.

For this reason you should already have a good idea of whether you will like the game before you even play it. People who are fans of these type of party games should have fun. If you have never really cared for these type of games though it won’t be for you. I personally had some mixed feelings. The game has quite a few issues (which I will get too shortly) but I had some fun with the game. The games present in the Heads Up! Party Game are far from original but there is a reason that they have remained popular for so long. There is something enjoyable about trying to get your teammates to guess words based on your clues with a running clock in the background. I will say that I was not a huge fan of Hey Mr. DJ though mostly because no one in our group can hum well which made it hard to get any correct answers. I found the other categories to be somewhat enjoyable though even if they are far from original. The only somewhat unique idea is the addition of normal and challenge play which is a nice addition as it provides players with more choices and allows players to take on a bigger challenge to score more points.

As all of the categories are based on public domain games the Heads Up! Party Game is quite easy to pick up and play. Fans of party games should already know how to play all of the categories as they have been used in other games. Even those people that have never played any of the other similar games should be able to pick up the game within a couple minutes. This is a positive for the game as no one wants a party game that begins with a long explanation of how to actually play the game. The game also plays pretty quickly as most games should only take 20-30 minutes.

The problem is that there are quite a few issues with the game.

I want to start with the idea that there is both a solo and team game. The games that Heads Up! Party Game is comprised of are usually team games. This game shows why that is. Unless I am missing something I have no idea how the solo game could even work properly. In the solo game everyone plays for themselves. The problem comes from the fact that your competition is giving you the clues you need to try and guess your words/phrases. There is no reason to give the current guesser good or even accurate clues as it will just increase your odds of losing the game. For the solo game to have any chance of working you basically have to set ground rules that players have to give as good of clues as they can even if it ultimately hurts their own chances. Having to give clues to help your competitors still feels off though which hurts the game. For this reason you basically have to use the team mode.

An even bigger problem with the cards is that there just aren’t that many of them. The game includes 200 cards (50 of each category) but you will play through them really quickly. Depending on the number of players you are likely to play through at least ten cards each round. You could easily play through close to half of the cards in one game. You probably won’t remember all of the words/phrases on the cards but there isn’t a lot of replay value in the game. This wouldn’t be such a problem except that the board game is based on an app which is considerably cheaper, and has more categories and words/phrases. I don’t see a reason to purchase the board game unless you can’t get the app version for some reason.

It isn’t just the app though. The biggest problem with the Heads Up! Party Game is the fact that it doesn’t do anything new or original. All of the categories are just different public domain games that have been made quite a few other times in the past. There really is no reason to purchase Heads Up! Party Game over these other games. As a matter of fact since all of the underlying games are public domain you could easily just create your own cards for the game. For these reasons there really is no real reason to even purchase the game unless you can find it for really cheap.

Should You Buy Heads Up! Party Game?

The Heads Up! Party Game is not a bad game but I think that it is flawed. The game is basically a combination of different public domain party games combined together with a mechanic where you display the cards on a band placed on your head. The gameplay basically comes down to players using different ways of giving clues to get another player to guess the words/phrases on their head. Fans of Charades, Name That Tune, and other generic describe the item to your teammate(s) games should have some fun with the game. It plays quickly and is easy to play. The problem is that there is nothing new or original about the game. If you have ever played one of these type of games before you have basically already played the Heads Up! Party Game. The game has a solo mode which makes no sense. Otherwise the game’s cards are flawed as they will become outdated quickly and there are not enough cards which leads to little replay value. Ultimately you are probably better off picking up the app or making your own version of the game.

If you are not a big fan of these type of party games Heads Up! Party Game is not going to be for you. People who really like these type of games though will probably have fun with the game. If this describes you and you can find the game for really cheap it may be worth picking up. Otherwise you are probably better off skipping the game entirely.