The object of Have You Herd? is to acquire at least one rabbit, one sheep, one pig, one cow, and one horse.

In Have You Heard you acquire animals in two different ways: by trade or by rolling the dice. Each players’ turn begins with the player having the opportunity to make one and only one trade. Players can make the following trades with the bank:

The player then rolls the dice. The dice are filled with pictures of animals and there are a couple special symbols. If only animals are rolled the player counts up the number of each type of animal on the dice as well as the animals currently in front of the player. For every pair of the same animal, the player gets another of that animal. For example if the player had three rabbits in front of them and rolled one rabbit on the dice,  he/she would get two new rabbits since he/she had a total of four rabbits. A player can only have twelve rabbits at one time though. Any additional rabbits that a player would receive are discarded. 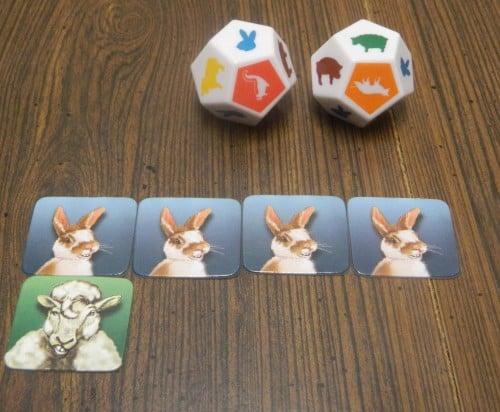 In the scenario above the player has a total of five rabbits and two sheep. The player would get two new rabbits and one new sheep.

Once the player has received all of their animals, they get an opportunity to make another trade (only one) using the chart above. Once they have either made their trade or passed, it becomes the next player’s turn.

When a player gets one rabbit, sheep, pig, cow and horse they win the game.

Although being a semi-recent release (2007), the game Have You Herd actually has a pretty long history. According to the game’s instructions, the game was created in 1943 in Warsaw, Poland by Professor Karol Borsuk. Back then it was called Hodowia Zwierzatek (The Little Animal Farm). He began making the game in his house and selling it to make some money after the Nazi’s closed down the university he worked at.

At a basic level, Have You Herd is a dice rolling game mixed with a set collection game. You roll the dice in order to either get more animals or deal with one of the special events. In addition to rolling the dice, each player controls their own herd of animals. For each pair of animals, players receive additional animals on their turn.

I am not a huge fan of dice games since most of them rely heavily on luck. I think Have You Herd is better than a lot of dice rolling games though because while it still relies pretty heavily on luck (every dice rolling game does) you can actually make decisions in the game that will have an impact on the game. The decisions usually aren’t very hard to make but at least there are some to make.

Have You Herd has two main strategies. The first is to accumulate a lot of rabbits early in order to have a good base of animals that will multiply every turn that you can then trade for sheep. The second strategy is to use the rabbits to get up to the sheep level and then essentially abandon the rabbits to focus on “higher” level animals. At first I thought accumulating rabbits was the best strategy but as the game progressed it appears that you should just abandon the rabbits after you have like three or four sheep. I think you should abandon the rabbits at this point since you might as well focus on the “higher” animals since it gets to the point that it takes too many turns to turn rabbits into the “higher” animals that you need. Once you have at least four of an animal you should trade two of them for the next animal since you will still get at least one of the lower animal and you can start working on getting more of the next animal. Plus you might get lucky and roll the animal you just traded for saving you several turns.

In addition to having more strategy than most dice rolling games, the game is quite easy to play and teach to new players. Essentially you roll dice and then need to make some easy decisions. The game takes a couple minutes at max to teach to a new player. The game is also simple enough that younger children should be able to play the game. The recommended age is 8+ but I think children with good counting and matching skills could play the game before age eight. The game is also quick with a game probably taking ten minutes at max.

Other than the luck inherit in all dice rolling games, the second biggest problem with the game is that there is no catch up mechanic in the game. I generally don’t like catch up mechanics, but this game kind of needs something. If your first three or four rolls are bad, you have almost already lost the game. This is due to the fact that good and bad rolls multiply over time. If you don’t get many animals early in the game you fall behind. Also since the other players have more animals, they multiply and those players extend their lead even if they don’t roll well. There really isn’t anyway to catch up either. This makes the game pretty boring for a player stuck in this situation since they just have to wait for the game to end. At least the game is pretty short so these players don’t have to wait too long.

I would classify Have You Herd as a filler game. You can have fun playing the game but it is not going to tax your brain. It is not the type of game that should be taken very seriously. It is a game that works well when you have 10-15 minutes to kill and you don’t want to think too hard. If you want a strategic game, Have You Herd is not going to be it.

Overall I would say that the components are decent. The animal tiles are okay. The artwork is fine and serves its’ purpose. The tiles are made of thick cardboard. I kind of wish the game could have included little figures of the different animals but I am guessing that would have added quite a bit of cost to the game and thus raised its’ price. I would say the outer container is good and bad at the same time. I like the creativity of using a silo as the storage container. Being such an odd shape though makes it harder to store since you can’t stack any other games on top of it.

Overall Have You Herd? is a decent dice rolling game. It has a couple small decisions that players get to make but is a pretty simple game. The game is fun but it relies quite a bit on luck and has a tendency to leave some players in the dust with no chance to catch up. The components are solid but could have been better.

If you only enjoy highly strategic games or hate dice games, Have You Herd will not be for you. If you don’t mind the occasional dice game and are looking for a solid filler game though, I think you will enjoy Have You Herd.