When most people first see Happy Salmon, the first thing that most people will likely notice is the silly packaging. Who wouldn’t notice a game that comes in a packaging that resembles a fish. Usually games that utilize silly packaging are bad to pretty average, but I had higher hopes for Happy Salmon as the game generally has positive reviews online. I am always willing to check out a silly party game as well. Happy Salmon may appeal to some people, but it just wasn’t for me.

How to Play Happy Salmon

On the count of three all of the players will flip over their deck of cards at the same time so the cards are now face up.

Once the cards are flipped over, players will begin saying out loud the action printed on their top card.

When two players say the same action they will perform the corresponding action (see below). Once the action is completed, both players will discard their card to the center of the table. This will reveal their next card and the process will continue. 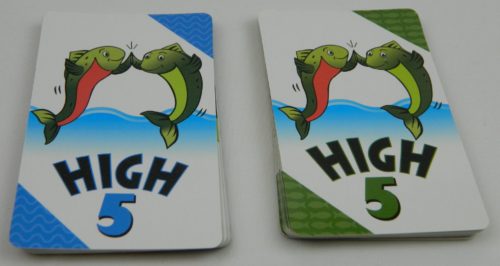 Both of these players have a High 5 card on the top of their deck. After performing a high 5 both players will be able to discard the top card from their decks.

If three or more players match at the same time, only the first two to match and complete the action will get to discard their card. The other player(s) will have to wait for another player to match.

At any time if a player can’t find a match they can take their top card and put it at the bottom of their deck in order to get a new card to try and match.

The actions that you will perform in the game are as follows: 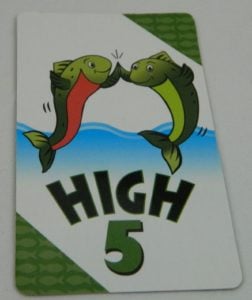 High 5: This card will have the matching players slap their hands together in a “high five”. 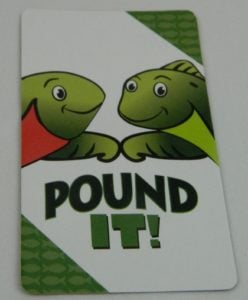 Pound It: Matching players will give each other a fist bump (touch their fists together). 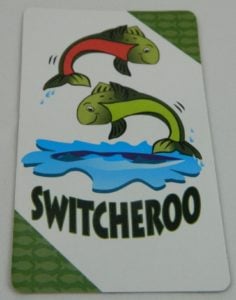 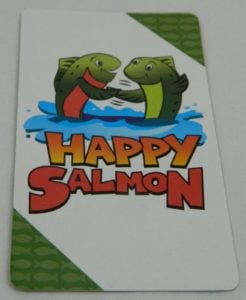 The first player to discard all of their cards wins the game.

Cooperative Play: All of the players are playing together to try and get rid of their cards as fast as possible. You will time how long it takes for the first player to get rid of all of their cards.

My Thoughts on Happy Salmon

Between the fact that I generally enjoy party games and the game’s generally favorable ratings online, I had somewhat high expectations for Happy Salmon. Unfortunately Happy Salmon was not the game for me.

The premise behind Happy Salmon is simple. Basically the objective of the game is to get rid of all of the cards from your pile before the other players. You do this by matching other players and performing the corresponding action. In many ways the game feels like a combination of a speed game and a party game. You need to be quick on your feet to find matches to get rid of your cards as quickly as possible. The game takes elements from party games as well due to you having to perform silly actions to get rid or your cards. Generally I enjoy both of these genres so it actually surprised me that I didn’t like Happy Salmon.

I think there are a couple main reasons why the game never really appealed to me.

When games decide to go down the silly route, there is a pretty fine line between where the silliness creates enjoyment and where it is just silly for silliness sake. I like silly games where it serves a purpose and drives the gameplay. I don’t like games that are silly just to be silly. Unfortunately I found Happy Salmon to lead significantly in the later direction where the game feels like more of an exercise in being silly rather than trying to be a good game. There is nothing particularly wrong with this as a lot of people like these type of games, they just don’t really appeal to me. Happy Salmon just lacks substance in my opinion.

With the vast number of different board games that I have played, the whole premise behind Happy Salmon is not particularly original. I can’t think of the names of any games right off the top of my head, but I am positive that I have played a number of other games with a premise pretty similar to Happy Salmon. This itself doesn’t mean the game is bad. The problem is that Happy Salmon doesn’t do anything to really stand out from these other games. The actions you perform can be kind of silly, but the game doesn’t do anything else particularly new or original. On top of this the game only features four different actions so you basically do the same things over and over again. The game couldn’t have had too many actions as it would then be hard to find a match, but four is too few where the gameplay becomes dull kind of quickly.

While this is definitely against the spirit of the game, the end game could also be broken if players are too competitive. If all of the players know one of the players are down to their last card, they could all agree to not match the other player in order to give themselves a chance to catch up. If a player would reveal a card that matches the player in first, they could just put it on the bottom of the pile before the other player could match them. This will totally ruin the game and I would highly recommend against it. If you are playing with highly competitive players though, I could see players utilizing this strategy.

On top of this the game relies on a lot of luck. You can impact your fate some by quickly recognizing when you have a match or switching your top card when you don’t have a match. You need to play fast if you want any chance of winning the game. The game still relies on a quite a bit of luck though. How your deck is shuffled compared to the other players will have a pretty big impact in how well you will do. You could just change out your card when you don’t have a match, but this wastes time. The player who has more of their cards match due to the order of their cards will have a distinct advantage in the game.

To fully enjoy Happy Salmon you really need to play it with the right group. The game will definitely work well with some groups, and will fail badly with other groups. To really enjoy the game your group needs to embrace the silliness and not care about how silly it makes the players look. The game won’t go over well with serious groups. I wouldn’t call my group particularly serious, but it still never really worked. Part of this might be because we only played the game with four players. I think Happy Salmon is the type of game that will be better with more players as you will then have more players to match. Ultimately I think the game will work best in two scenarios. First the game should work well for families with younger children as the game is simple to play and yet silly enough to appeal to children. The other group is a party situation where adults don’t care how silly the game is. If your group generally likes these type of games, I could see the game working well.

The game was designed in a way where they were likely trying to target these two groups. The game knows its silly and doesn’t shy away from it. The game is also about as simple as they come. The game could honestly be taught in around a minute or two and outside of remembering what you have to do for each action, most players should pick up the game right away. This makes the game really easy for players to jump right into and start playing. The game is also really quick where it will only last minutes. Thus the game works well as a filler game or you could easily play a couple games back to back declaring the winner as the player that wins the most games.

As for the game’s components, I thought they were pretty much what you would expect. The game basically consists of enough cards for six players. The artwork is solid and the cards are designed in a way where you can quickly recognize the action for any card. The cards are pretty thick which should help them last longer. Cards will likely eventually develop creases though due to the type of game that it is. As for the packaging I applaud the creativity. The fish packaging looks nice and is pretty much the perfect size as there isn’t much wasted space.

Should You Buy Happy Salmon?

Ultimately Happy Salmon just wasn’t for me. I am not entirely sure why either as I generally like these type of silly party games. I think a lot of it has to deal with the game being silly for silliness sake. Outside of the silliness you are left with a pretty generic party game that doesn’t do anything particularly interesting. You just try to match another player’s card and then perform an action. That is all there is to the game. My group just found this to be kind of boring. While the game wasn’t for me I can appreciate that some people really like the game. It is really quick and easy to play. In larger family and party situations I could see the game working if the players want to play a game that is silly.

My recommendation for the game really comes down to your thoughts on the premise. If you aren’t really interested in Happy Salmon’s premise, I don’t see the game being for you. If you have the right group though and it seems like the type of game that you typically enjoy, I think you should consider picking up Happy Salmon.