While I do love the recent trend towards more serialized comedies that has been taking place recently (such as The Good Place), I do still love mostly self-contained series like Scrubs and How I Met Your Mother. Happy Endings is a series that I heard was supposed to be much better than you would expect from its title but until now, I never got around to watching it. While I wouldn’t say it is a classic comedy that everybody should watch, it is a very good one that fits nicely into the second tier of sitcoms. It is definitely a hidden gem though and I think most fans of network TV comedies will enjoy it.

Happy Endings aired on ABC for three seasons and 57 total episodes from 2011-13. The series opens with the wedding of friends and longtime lovers Dave (Zachary Knighton) and Alex (Elisha Cuthbert). Unfortunately, the two don’t get a happy ending as Alex runs away at the altar. While the two quickly bury the hatchet for the sake of their other four friends (who they share), the Alex/Dave relationship is the one semi-serialized aspect of the show (though even this doesn’t last for long). Otherwise, Happy Endings is just a sitcom about friends and the situations they get into. Two or more plot lines are featured in most episodes, focusing on different combinations of the friends. Other main cast members include Eliza Coupe, Damon Wayans, Jr., Casey Wilson, and Adam Pally.

While I enjoyed Happy Endings: The Complete Series, it is a bit hard to explain why. It certainly isn’t one of the funniest TV shows I’ve ever seen or anything, but the episodes are “ah-maz-ingly” consistent, almost always providing at least a few good laughs in each. Pretty much every episode I’ve seen so far has earned a 3.5 out of 5, meaning the show is consistently slightly above average. While it isn’t a perfect comparison, to me the show feels like a poor man’s How I Met Your Mother or Scrubs (but just a few small steps down from those series).

Another positive about Happy Endings, it has a very funny and talented cast. Casey Wilson, Eliza Coupe, and Damon Wayans, Jr. were all comedy veterans at the time and Adam Pally was a pretty good find as a relative newbie. Some of the characters in the show are very cookie-cutter (especially Jane and Dave) but there are also some pretty unique ones like Penny and Max. Max in particular is one of the more unique gay characters I’ve seen on TV.

For criticisms, the biggest thing is that the concept (about twenty-something friends) is one of the most common types of sitcoms out there. Almost everything about the plot has been done before countless times in other TV comedies. Also, while there is enough to laugh about and the show is super consistent, it never really got any big laughs out of me. There really aren’t any standout episodes for Happy Endings like most comedies have that you will watch over and over and over again. There isn’t a “Slap Bet” (How I Met Your Mother), “S.O.B.s” (Arrested Development), “The Contest” (Seinfeld), or “My Screwup” (Scrubs) in the bunch. However, being consistently above average is good enough for me. 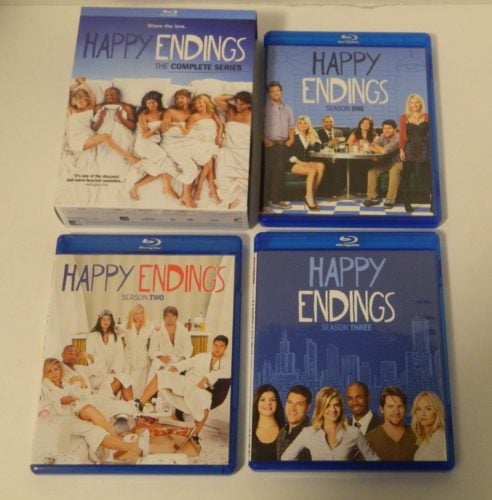 Mill Creek Entertainment always tries to keep the retail price for their releases down but overall, Happy Endings: The Complete Series would be a pretty good release even if I didn’t take bang for your buck into account. Each season gets its own Blu-ray case so discs aren’t stacked or in sleeves like some previous Mill Creek releases. However, as a budget release there is some video compression to get as many episodes onto discs as possible (to keep the price point down). If you are just an average viewer like me who doesn’t really notice video issues you probably won’t even see a difference though. To me, it pretty much looked like broadcast quality. Happy Endings: The Complete Series was also released on DVD so if you don’t care about video quality and would prefer to save a few bucks, you might want to just pick up the DVD release (especially since comedies don’t really need to be seen in high-definition).

One thing that likely contributed to Happy Endings relatively quick end was network meddling. Episodes were aired completely out of order and while this isn’t a huge deal for a sitcom, some of the Dave and Alex stuff would have been quite confusing for viewers watching it. This release re-orders the episode into the order they were actually supposed to air. Bonus features for Happy Endings: The Complete Series include deleted scenes, outtakes, parodies, and cast interviews. While these features are all pretty short, there are quite a few of them on each disc and some of them are actually pretty funny.

I wouldn’t really call Happy Endings a groundbreaking comedy or one that is absolutely essential viewing. However, if you have already watched all of the top tier comedies (Arrested Development, Seinfeld, Scrubs, and the other usual suspects) you could do a lot worse than Happy Endings. The episodes are insanely consistent and should provide you with an ample amount of laughs. Recommended for most comedy fans.

Happy Endings: The Complete Series was released on Blu-ray on August 7, 2018.