Regular readers of Geeky Hobbies will know that we sometimes have a quirky taste in board games. While I generally don’t like children’s games, there is one small subset that I have always kind of liked: quirky dexterity games. I have always liked these type of games going back to Loopin’ Louie which I was a big fan of when I was a kid. Today’s game Hang in There! was a little after my time so I never played it as a kid, but I was still intrigued by it as it looked like it might have that spark that makes it appeal to adults as well as children. It didn’t hurt that it was in the running for the Kinderspiel Des Jahres in 2009. Hang in There! is one of those children’s games that can be surprisingly enjoyable for adults as long as you play it is small doses.

How to Play Hang in There! 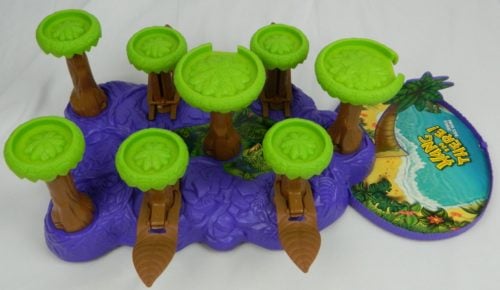 Once the game begins all of the players will play at the same time. Each player/team will place one of their animals on the tree on their side of the game unit closest to the start button. The trees will spin the animals around. When an animal is above the second tree in the sequence you will push the lever on the tree which should lift the animal off the first tree. 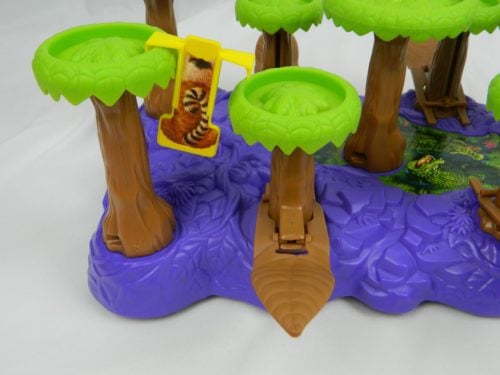 The animal is above the second tree on the board. 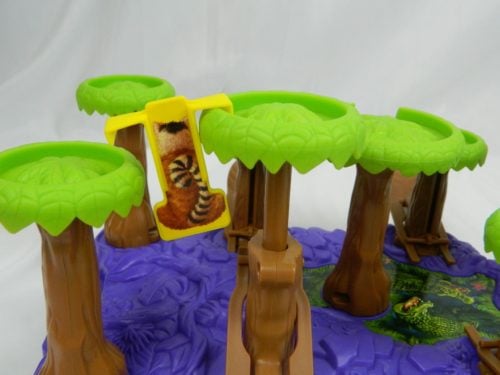 The player has lifted up the treetop of the second tree in order to pick up the animal so it could move further into the jungle.

Whenever there isn’t another animal of your color on the first tree, you can place another of your animals on the tree.

From the second tree you will try to lower the animal onto the third center tree. This will then get picked up by the fourth tree and finally dropped onto the final tree where it will fall onto the beach. 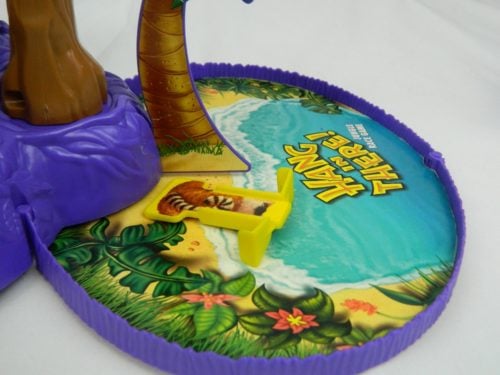 The yellow player has gotten one of their animals to the beach.

If an animal should fall off a tree somewhere along its journey, you will have to start it again from the first tree. If younger children are playing you can choose to restart an animal from the tree that it fell off. 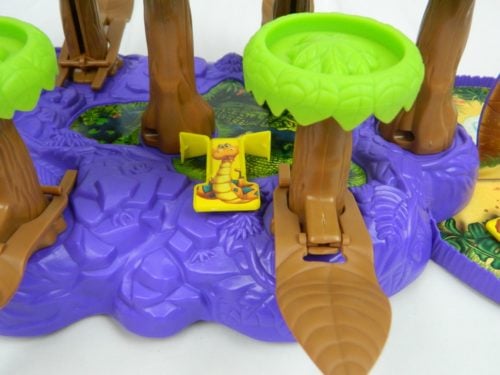 This player has dropped their snake playing piece. They will have to start it again from the first tree.

If one of the players/teams get all of their animals onto the beach they will win the game. 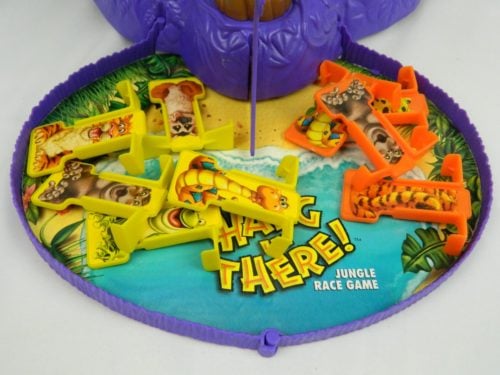 The yellow player has gotten all five of their animals to the beach so they have won the game.

My Thoughts on Hang in There!

Having no nostalgia for Hang in There! as I never played it in as a kid (I was a little too old for the game when it first came out), I was curious how much I would enjoy the game. For games like this, nostalgia can sometimes play a pretty big role in how much you enjoy it. There are plenty of games that I still enjoy today despite them not being very good, due to me playing them a lot as a kid. Even without having nostalgia play a factor, I would say that the Hang in There! was still pretty enjoyable.

The concept of the game is quite simple. The objective is basically to get all of your animals across the jungle as quickly as possible. The trees spin in circles and you have direct control over every other tree in the path towards the finish. You press a lever which raises and lowers the trees you control. You try to use this to latch the animals as they cross over the trees and then deposit them onto the next tree. To do well you need to mix speed as you try to get them across the trees as quickly as possible, with a delicate touch since if you mistime it the animal will go back to the start. The player that has the right balance between speed and precision will win the game.

I have always liked these type of quirky dexterity games and Hang in There! is another one that works surprisingly well as a game that the whole family can enjoy. I am not entirely sure what it is exactly, but Hang in There! has that element that is key for these type of games to be enjoyable for both children and adults. While the gameplay is not exactly the same, in some ways Hang in There! reminds me of Loopin’ Louie which I have been a big fan of since I was a kid. I personally think Loopin’ Louie is better, but that might be due to nostalgia. While playing Hang in There! it had a similar feel. The gameplay is simple, and yet quite fun. The gameplay basically consists of raising and lowering trees, but the game is still fun because this is quite satisfying. If you generally like these type of games and are intrigued by the premise, I think you will have fun playing Hang in There!.

For a game that was designed for children, I have to say that I was actually a little surprised that the game was more challenging than I initially expected. The game is really easy to play as it can be taught in a minute or two. The challenge comes from you having to be somewhat precise with the trees when you pick up and drop off animals. It is not hard to knock off an animal and have to restart it from the beginning. Timing is key as you have a pretty narrow window for when you can pick up and drop off animals without them falling off. The more you play the game the easier it will likely become. Some younger children might find this difficulty to be a little frustrating, but I like that the game is a little more challenging as it keeps adults interested.

While the game can be pretty fun as a two player game, I would probably recommend against playing it with four players. This is especially true if you are playing with adults. The problem with having four players is that each player is in charge of only one tree. The first player is usually pretty busy putting new animals into the game and getting them started on their journey. The player in charge of the second tree though won’t have a lot to do at times in the game. Thus they are free to spend their time actively trying to mess with the other team’s animals. With four adult players it is almost impossible to get any animals to the beach as a player on the other team will likely be able to mess with them before they reach that point. While this can still be an issue in the two player game, it is not nearly as bad since the players will have much more to focus on where they can’t devote a significant amount of their time to messing with the other player. With players actively playing defense against the other team, the game is just not nearly as much fun as it becomes more of a game about messing with the other team. The only way I could see it working is if the players aren’t particularly competitive where they won’t purposefully mess with each other. This won’t be as bad with children, but it likely will be a problem with adults.

Other than Hang in There! not being great with four players, the other major problem with the game is that it is one of those games that you aren’t going to want to play for long stretches of time. Each game will at most take three minutes to complete as the game will stop at that point if no one has already won. The game is fun enough that the players will likely want a rematch or will want to play some sort of best of series to declare the ultimate winner. After a while the game becomes a little repetitive though as the gameplay never really changes. Thus after 15-20 minutes the game will reach the point where you likely will want to put it away for another day. The game is fun enough where you will want to play it again. Ultimately it will likely become one of those games that you will play for a little while, and then put it away for a while before you bring it out again. This is not a dealbreaker, but it isn’t the time of game that you will want to play for long stretches at a time.

This gets a little worse when you factor in how long it takes to put the game together. The game assembly is not all that difficult, but it does take some time. It would have been nice if you could have kept parts of the game together to reduce the setup time some. Unfortunately the game box is not large enough to allow this as it is barely big enough to fit all of the pieces disassembled. Therefore it will likely take you at least a couple minutes to reassemble the game each time you play it. For the most part I actually liked the game’s components as they are made of a nice durable plastic. The game unit works pretty well even though some people will likely find the music to be a little loud. While the game unit is constructed pretty well, I have encountered some used copies of the game at thrift stores and rummage sales that don’t work so not all copies of the game last as well as you would hope.

Should You Buy Hang in There!?

I never played Hang in There! when I was a kid so I had no nostalgia for the game. Despite this and the fact that the game is a children’s/family game, I still had quite a bit of fun with the game. The gameplay is really simple as you just lift and lower trees in order to help animals get to the beach. The gameplay is still quite fun though like a lot of children’s games from this genre such as Loopin’ Louie. The game is even more challenging than you would initially expect as you need pretty good timing in order to pick up and drop off the animals without knocking them off the trees. While the game supports four players, I would recommend against it as the game becomes far too defensive at that point. Hang in There! is also the type of game that is better in shorter doses of like 15-20 minutes before you put it away for another day. This is kind of a bummer as the setup time is a little longer than I would have liked.

Buy Hang in There! online: Amazon