Hammer Film Productions is mostly known for their films featuring classic horror characters like Dracula, the Mummy, and Frankenstein. However, they also produced films in plenty of other genres including a lot of thrillers. All four of the films on these two Hammer Films Double Feature Blu-ray releases are thrillers, not the classic monster movies the company is known for. Even though these four films are ones that pretty much nobody has heard of, there’s always the chance of finding a hidden gem in these collections. Do any of these four films meet that criteria? 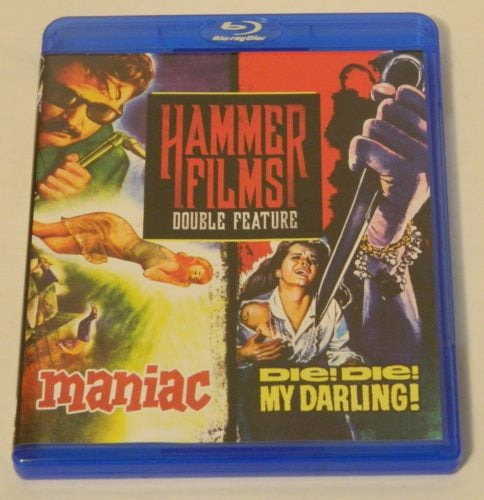 This double feature set includes Maniac and Die! Die! My Darling! (aka Fanatic). Maniac is a 1963 psychological thriller about an American artist in France who becomes romantically involved with an older woman and her teenage stepdaughter. He agrees to help the woman get her husband out of the asylum, where he was spending time for using a blowtorch to kill a man who had raped their daughter. While he does this to win the woman’s love, she unsurprisingly has a different plan.

Of the two films in this set, I was much more interested in watching Die! Die! My Darling! than this one. Thus, it isn’t surprising that I wasn’t exactly thrilled with Maniac. It’s fine with decent acting and good production values but it fails in the thrills department (which for a thriller film is a bad thing to miss the mark in). There is a nice unexpected twist ending but the rest of the plot is pretty mediocre. Maniac was trying too hard to be a Psycho ripoff and unfortunately it pales in comparison to that great film. 2/5

Die! Die! My Darling! came out two years later. This thriller film is also about an American traveling overseas, though this one is about a woman named Patricia arriving in London to get married to her significant other. Before her marriage, she decides to visit the super-religious mother of her deceased former fiance (who had died in a car accident a few years earlier). This woman blames Patricia for her son’s death and holds her captive to attempt to cleanse her soul.

I enjoyed Die! Die! My Darling! a bit more than Maniac but I still found it a bit too boring for my taste. There’s some great acting from Tallulah Bankhead and Stefanie Powers but the movie isn’t particularly thrilling and films like this are a dime a dozen (movies about crazy religious people trying to “save people’s souls”). Again, this is the better of the two films in the Hammer Films Double Feature Volume 3 release but it certainly isn’t a must-watch. 2.5/5

Scream of Fear is a 1961 thriller film about a woman in a wheelchair (Penny played by Susan Strasberg) returning to her family home after her father’s mysterious disappearance. Upon her return, she finds her father’s corpse in multiple different locations around the house but nobody else sees it. Even though no one else believes her, she quickly begins to believe that her father is dead, possibly at the hands of her stepmother.

Scream of Fear is a great example of a film that is pretty average for the majority of the movie but completely sticks the landing with a great ending. However, I’m not sure if the ending is worth putting up with about an hour or so of average, boring content. It’s the best film of the four in these two volume sets but still pretty boring overall. The acting is great and includes pretty well known actors like Strasberg, Christopher Lee, Ronald Lewis, and Ann Todd. The only problem is that the story mostly consists of boring conversations mixed in with a few sightings of the father’s corpse (which are spooky but not particularly scary). That isn’t really a good match for a supposed thriller. Christopher Lee was quoted as saying this was the best Hammer film that he was in but I kind of doubt that is the case. Overall, Scream of Fear is capable but pretty boring (though with a great ending). 2.5/5

While I didn’t watch the film and due to that I’m not going to review it, Never Take Candy from a Stranger is from 1960. The film is about two young girls being lured into the house of an elderly man who demands that they dance naked for him in exchange for candy. The parents learn of this disturbing event and go to the police. However, the accused man is part of a wealthy and influential family in the town and thus the police chief doubts their story. However, the case does proceed to court under the assumption that their story will fall apart and the stacked jury will vote to acquit.

Since these films are all from the early-to-mid ’60s (and three of the four are in black and white), you wouldn’t expect them to look super amazing on Blu-ray or at the very least it is much more acceptable for there to be some flaws. However, I thought the films I watched actually looked great on Blu-ray, especially for their age. The picture quality is very sharp and likely a huge improvement over the DVD releases of these films. Due to the age of these films, it also shouldn’t be a surprise that no bonus features are included.

Overall, my thoughts on the three films I watched were pretty middling. I gave out two 2.5 grades and a 2/5. If you are into old British thrillers, these two releases might be worth picking up but at least for me, they were a bit too boring.

Hammer Films Double Feature: Volumes 3 and 4 were released on Blu-ray on March 6, 2018.

As for the other set, I thought your reviews were spot on. Although I’d rank them a tad lower.

Thanks for your comment, I might try to get around to watching Never Take Candy From a Stranger at some point.