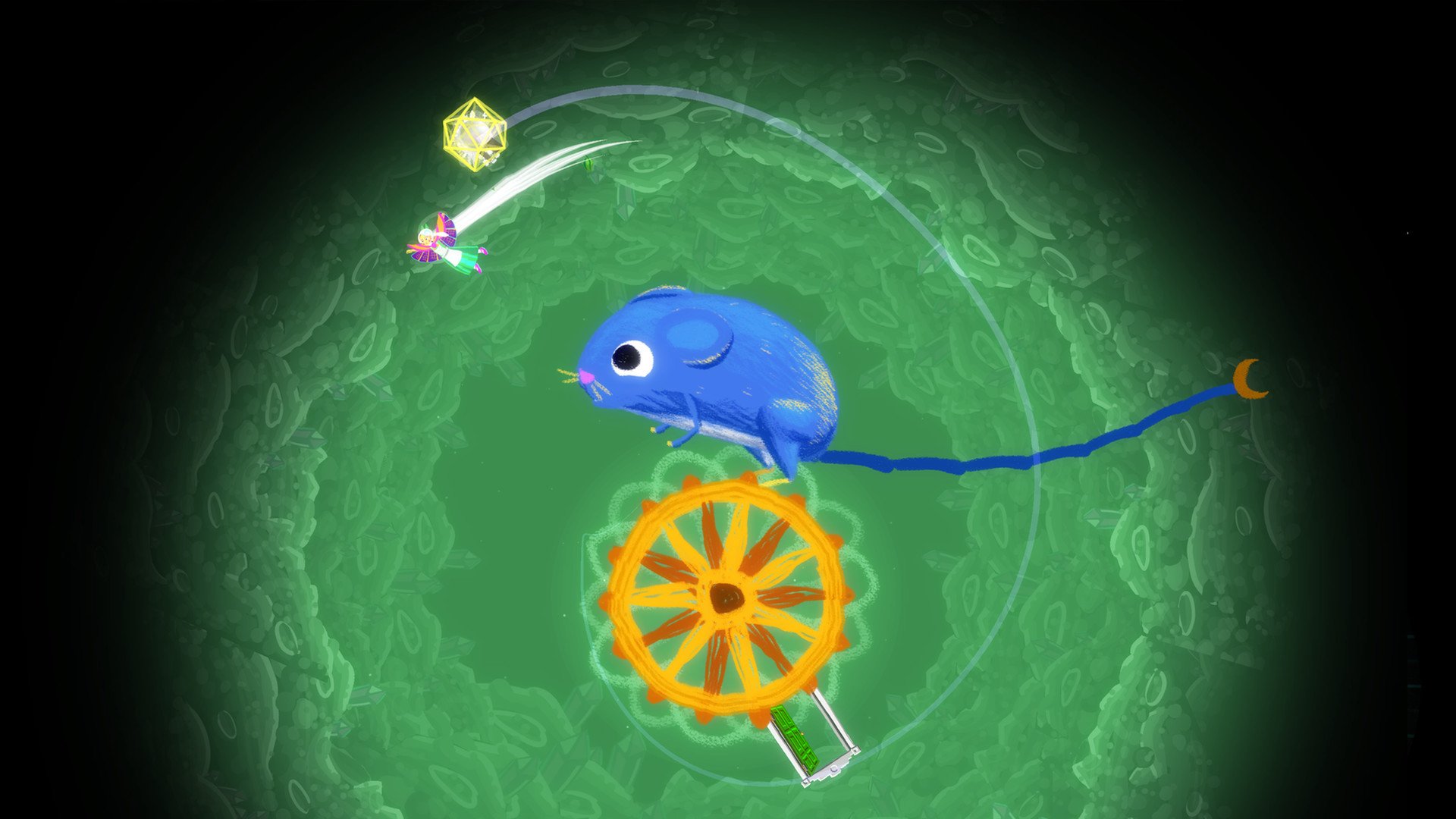 Originally released back on PC back in January of 2015, Gravity Ghost received a lot of critical acclaim when it was first released. Four years later the game was released this week on Playstation 4. Being a fan of unique indie games, Gravity Ghost is the type of game that I gravitate towards as I always appreciate a game that does something unique. Basically the premise behind the game is that you are traveling among the stars collecting items to continue on your journey. As everything takes place in space though gravity does not work like your typical video game as it is instead affected by the planets in your area. This concept really intrigued me because it felt like it could be the 2D indie version of Super Mario Galaxy. Despite being on the easy and short side, Gravity Ghost is a beautiful indie game with original and fun gameplay.

In Gravity Ghost you play as Iona the ghost. After losing her best friend Voy the ghost fox, Iona strives to search the galaxy to find him. While exploring the galaxy Iona finds other creatures in need of help including seven magical guardians. Equipped with a set of powerups and the ability to terraform planets, Iona needs to traverse between planets as she explores the galaxy and learns more about her past.

While this is oversimplifying Gravity Ghost, I would say that it plays a lot like what you would expect out of a 2D indie version of Super Mario Galaxy. The game is broken down into over 100 levels. The goal of each level is pretty simple. Each level has a star and a door in it. You need to collect the star which opens the door allowing you to proceed to the next level. It is not as easy as just picking up the star and heading to the door though. As you are traveling through space the gameplay revolves around jumping between different planets. Each of these planets have their own gravity with some planets having stronger gravity than others. This leads to players floating between the planets and using their gravity to slingshot them to other parts of the level.

In addition you will occasionally face other challenges and unlock special abilities to help you in your journey. Occasionally you will encounter some animal spirits that have become separated from their bodies. You will catch the spirit in one level and return it to its body in another level. You will also acquire some special abilities throughout the game. These abilities include having gravity affect you more or less, being able to jump and dash when you are between planets, as well as some other abilities. The most prominent ability is the ability to terraform planets. You can use this ability to change a planet from one type to another. The type of planet affects its gravity as some planet types have stronger and weaker gravity. Some planet types also have special abilities.

While it is kind of hard to explain exactly why but the gameplay in Gravity Ghost is so satisfying. Using the gravity of the different planets to float through the sky feels so simple and yet it works so well. You may be basically doing the same things in each level and yet I never really tired of the gameplay mechanics that form the framework of Gravity Ghost. The game does a great job using these mechanics to create a really relaxing atmosphere. The game has no time limits and there is no way to die. The challenge comes from trying to beat the levels as quickly as possible. Other indie platforms have utilized gravity mechanics but few come close to making it as satisfying as Gravity Ghost.

Its not just the gameplay that does a good job bringing a relaxed atmosphere to Gravity Ghost. The graphical style is fantastic. The game’s world building is great and quite creative. The whole game creates a world that you just want to explore. The characters in the game are interesting and charming as well. Between all of these elements Gravity Ghost is the type of game that you just want to spend time in just floating through space. This is all combined with a good story. While I am not going to get into specifics to avoid spoilers, I was genuinely touched by the story. The game does a great job balancing between some cheesy humor and some truly touching moments.

While I thought Gravity Ghost was a good game that I really enjoyed playing, it does have a couple issues that keep it from being as great as it could have been.

I would say that the biggest problem in the game is the fact that it is quite easy. I play a lot of indie games in this genre so that might have played a role in the game’s difficulty. Still I rarely had any troubles with the levels. I liked that the game was laid back and there is no way to die. I wish the game would have made the challenges a little more difficult to complete though. I ended up beating many of the levels within a minute or two as it is pretty easy/straightforward to complete each level. If you are just looking for a relaxing game this isn’t a big problem as despite the game being quite easy it is still enjoyable. If you are looking for a challenge though Gravity Ghost likely won’t provide it.

Gravity Ghost being so easy leads to my other issue with the game. Even though Gravity Ghost has over 100 levels, the game is still quite short. As I said most levels in the game can be completed in around a minute or two with some levels taking even less time. This means that you can beat the base game pretty quickly. I somewhat took my time trying to collect everything in every level and yet I still would say that the base game would only take around 2-3 hours to complete. The game has an achievement to beat the game in 50 minutes. I don’t think that it would be all that difficult to complete the achievement if you rushed through the game. The challenge levels add some time to the game as they take quite a bit longer to finish. With the challenge levels I think you could beat the game in 3-4 hours. The main reason that I am disappointed by the length is that I just wish the game was longer as I was still really enjoying the game when it ended. For this reason I wish Gravity Ghost would get a sequel/spiritual successor.

On the whole Gravity Ghost is a great game. Utilizing a unique gravity platforming mechanic, Gravity Ghost plays unlike any other game that I have played. Other indie platformers have dealt with gravity mechanics but I haven’t played another game that plays quite like Gravity Ghost. The gameplay is just so satisfying as it is unique and works really well. On top of this Gravity Ghost does a great job creating a laid back atmosphere. The game has a great graphical style and a touching story. Unfortunately the game doesn’t reach its full potential because it is a little on the easy side. Outside of the challenge levels you aren’t going to have much trouble beating all of the levels in the game. This leads to Gravity Ghost being on the short side.