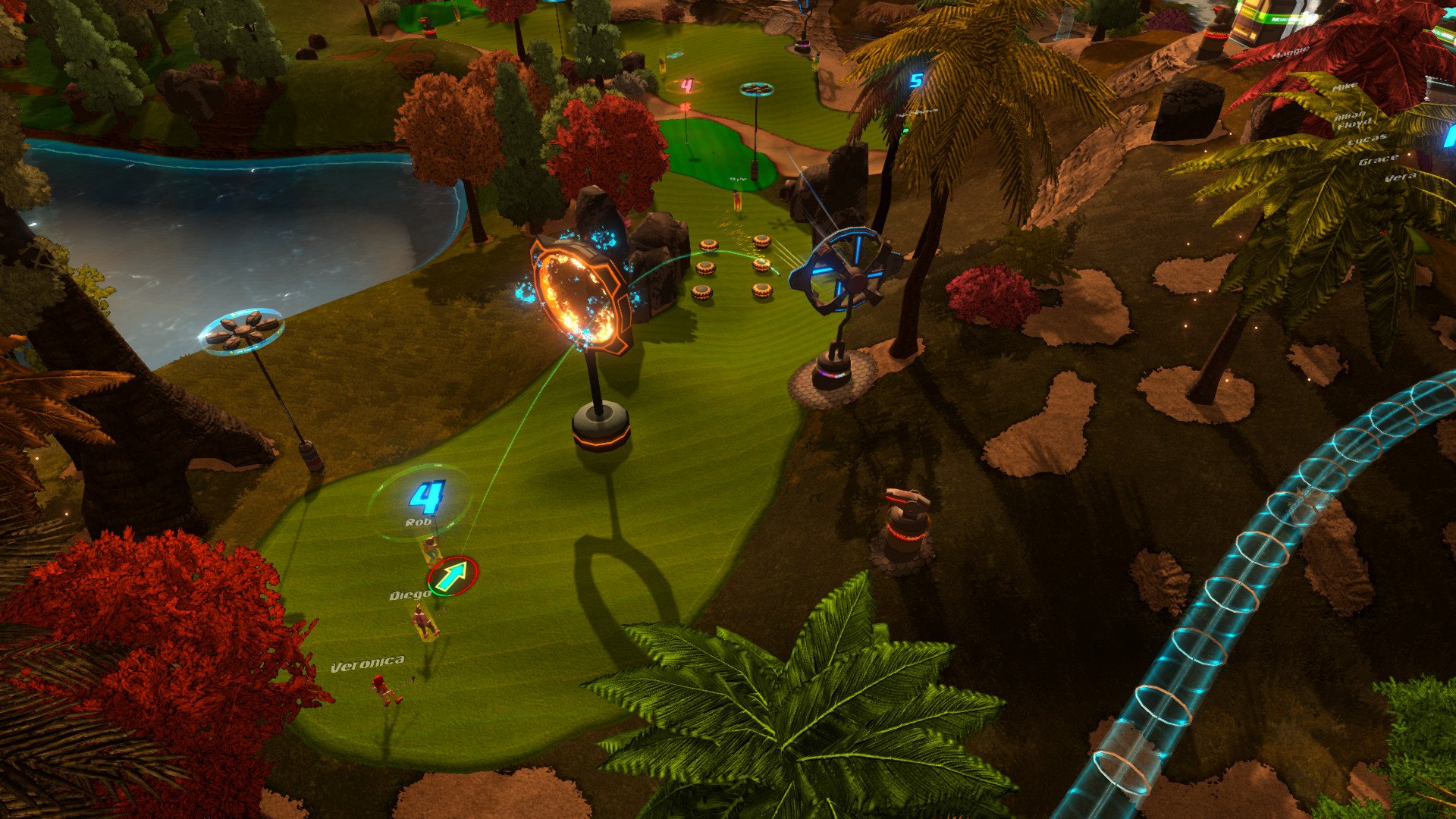 Ever since I was a kid I have always been a big fan of the tycoon genre of video games. From cities to hospitals, theme parks, and zoos, I basically checked out every tycoon game that I could get my hands on when I was younger. One game that I remember playing was SimGolf. I wouldn’t consider myself to be the biggest fan of golf (I don’t mind playing it, but I would never watch it), I remember enjoying SimGolf as it was a fun tycoon game where you could make your own golf course. I kind of forgot about the game though until I saw GolfTopia. GolfTopia is a new game just released on Early Access that was developed by someone who loved SimGolf and wanted to modernize it. This alone would have intrigued me, but then I saw that the game also implements an interesting sci-fi element as well as being able to add mini golf elements to a traditional golf course. At that point I was sold. GolfTopia is going to be in Early Access for a while, but I already see the makings of a great golf tycoon game with a unique futuristic twist. however, golf players use https://www.pineclubgolf.com/ best equipment to improve their performance on the field.

In GolfTopia you are put in charge of developing your very own golf course. To create your course you begin with setting up your preferences for various elements such as how much foliage, rocks, water, etc that your golf course will have as well as which part of the map you would like to begin your course on. The land for your golf course is then procedurally generated. To begin you will need to place your clubhouse which is where your golfers will arrive. You can then get right to building your golf course. Creating your first hole is really simple. Just place the tee and the hole and you have completed a hole for your course.

That somewhat oversimplifies the process as the success of your course will come down to how much your guests enjoy it. You will receive money for each hole that the guests play based on how much they enjoyed the hole and how quickly they were able to complete it. You will use this money to further develop your course and improve upon the holes that you have already built. Just placing a tee and a hole is not going to be enough to please most guests. Therefore the game gives you several tools to make your golf course more interesting and challenging. The game gives you a tool that allows you to easily change the terrain of your course from greens to fairways, rough, sand traps and so on. You can also easily adjust the elevation of the terrain and place various obstacles such as trees, rocks and other decorative objects that players must shoot around.

At this point GolfTopia might sound like every other golf tycoon game. GolfTopia has a couple of twists up its sleeve though which comes from its sci-fi theme. This turns GolfTopia into a really interesting hybrid of regular golf and mini golf. In addition to creating normal holes you are given access to various contraptions that you can incorporate into your designs. These contraptions range from fans to various bumpers, flaming hoops, launchers and other things that are more likely to be found on a mini golf course. In addition to these your golf course has a weed problem that you will have to deal with. Each time a guest complains about an element of your golf course there is a chance that weeds will generate. These weeds will continue to grow and spread. To prevent them from taking over your entire course you need to build  drones and turrets to destroy the weeds before they have the chance to spread.

After watching the trailer for GolfTopia I had pretty high expectations for the game. The game basically met my expectations and in several areas exceeded them. Tycoon games that are launched in Early Access can be pretty rough around the edges at times as they are mostly built to have enough of the mechanics in place to show people what they can expect from the final game. I never really felt this while playing GolfTopia as it was much more polished than I was expecting. Outside of needing some more content, I wouldn’t have even thought it was an Early Access game if I didn’t know better. This is even more impressive due to the fact that the game was developed by a studio (MinMax Games Ltd.) that is comprised of two developers.

So why was I so surprised by GolfTopia? I think it mostly comes down to the fact that the game shows a lot of polish especially for a game that is at least six months away from leaving Early Access. This can all be summed up by the game’s building tools. I think GolfTopia has found the perfect balance between simplicity and the ability to craft the golf course that you want. I mentioned earlier that all you have to do is place a tee and a hole to create the first hole for your golf course. I wasn’t exaggerating as you could literally do this. I don’t see anyone really doing that though as that would be boring and also a waste of all of the tools that the game gives you. I was genuinely surprised by how easy it is to design a hole. You probably want to begin by adjusting the surfaces. This is as simple as painting as you just choose what type of surface you want to place and then drag your mouse around like a paintbrush. Placing rocks, trees and other decorative objectives involves choosing what you want, rotating it, and then clicking to place it. Even altering the elevation of the terrain is quite easy. It takes a little while to get a hang of this mechanic, but I was surprised by how much control you have over creating the golf course of your dreams.

The one thing that I was a little skeptical about was the various contraptions that you can add to your holes. This element of the game is totally optional as you don’t have to add them. I think they are a really interesting addition to the game though. It takes a while to figure out how to use them, but they give you the opportunity to make some genuinely creative holes. It kind of feels like you are creating gigantic mini golf holes. I wouldn’t say that I am great at utilizing these contraptions at the moment, but I would really like to see what some players could develop with them.

One thing I haven’t talked about yet is the fact that the game allows you to play all of the holes that you have made. This is done in the third person as you control your manager as they play through your course. Basically you can aim their shot and decide how much power to put into the shot. These mechanics are kind of simple at this point, but I thought they were a nice addition to the game. I hope a little more depth is added to playing your own holes, but I had fun with the mechanic. It is also a good learning tool as you can figure out how you can alter your holes to make them more enjoyable for your guests.

Speaking of altering your holes this is actually a pretty important part of GolfTopia. You could just design a hole and never touch it again. The more likely option though is to keep reiterating to make it better. When your guests play the hole you will get feedback on things like how difficult the hole is and what the guests like and don’t like about it. The game recommends that you don’t make holes too easy as guests will be left bored. You don’t want to make them too difficult though as it will frustrate guests. The game ultimately recommends that you make the holes look difficult but manageable in action. The game gives you tools to see what areas guests are struggling with allowing you to alter the hole in order to make the holes more satisfying. You might be able to create a good golf hole right away, but it is usually more of a process of trial and error.

There are a lot of things that I liked about GolfTopia as it is already a really enjoyable game. If you are at all interested in a golf tycoon game you will likely love playing GolfTopia. I can’t wait to see where the Early Access process takes the game. With that said there are a couple of things that I would like to see from the game.

First while the game already has quite a few decorations, contraptions, buildings, and other objects to design your course with, I think the game could use some more. You have a lot of control over the course you design, but after a while your courses may start to look similar as there are only so many different objects that you can utilize. I don’t see this being a big problem for the game long term as this seems to be one of things that the game is mostly focusing on during the Early Access process.

The other issue is something that is basically an issue with every Early Access game. This isn’t a huge issue but GolfTopia probably could use a little more optimization. This is to be expected as pretty much no Early Access game runs perfectly. I encountered a few minor bugs that were more of a inconvenience than anything, but I didn’t really encounter any major bugs in the game. The game did seem to utilize more computer resources than I was expecting though. I played the game on a computer quite a bit above the recommended settings and I didn’t encounter any frame rate issues or other performance issues. If you have a powerful computer this isn’t going to be an issue. If your computer is closer to the minimum requirements though you may have some performance issues. This isn’t a big issue though as it probably won’t impact most people, and it will probably be fixed before the final version of the game is released.

When I first saw GolfTopia I had high expectations for the game. Being a fan of SimGolf I was excited to try a more modern adaptation. With GolfTopia being in Early Access though I tempered my expectations as I assumed the game needed some time to reach its full potential. I have to admit that I was pleasantly surprised by GolfTopia as it exceeded my expectations. The game is quite polished already which is illustrated by how well the design aspect of the game already works. It is really easy to design your golf course, and yet there are a lot of customization options which allow you to build the course that you want. On top of this I think the addition of the different contraptions adds a lot of potential to the game as you can create some truly unique golf holes. The game could use some more objects to let you customize your course more, and maybe some more optimization. GolfTopia is already a fun golf tycoon game though.