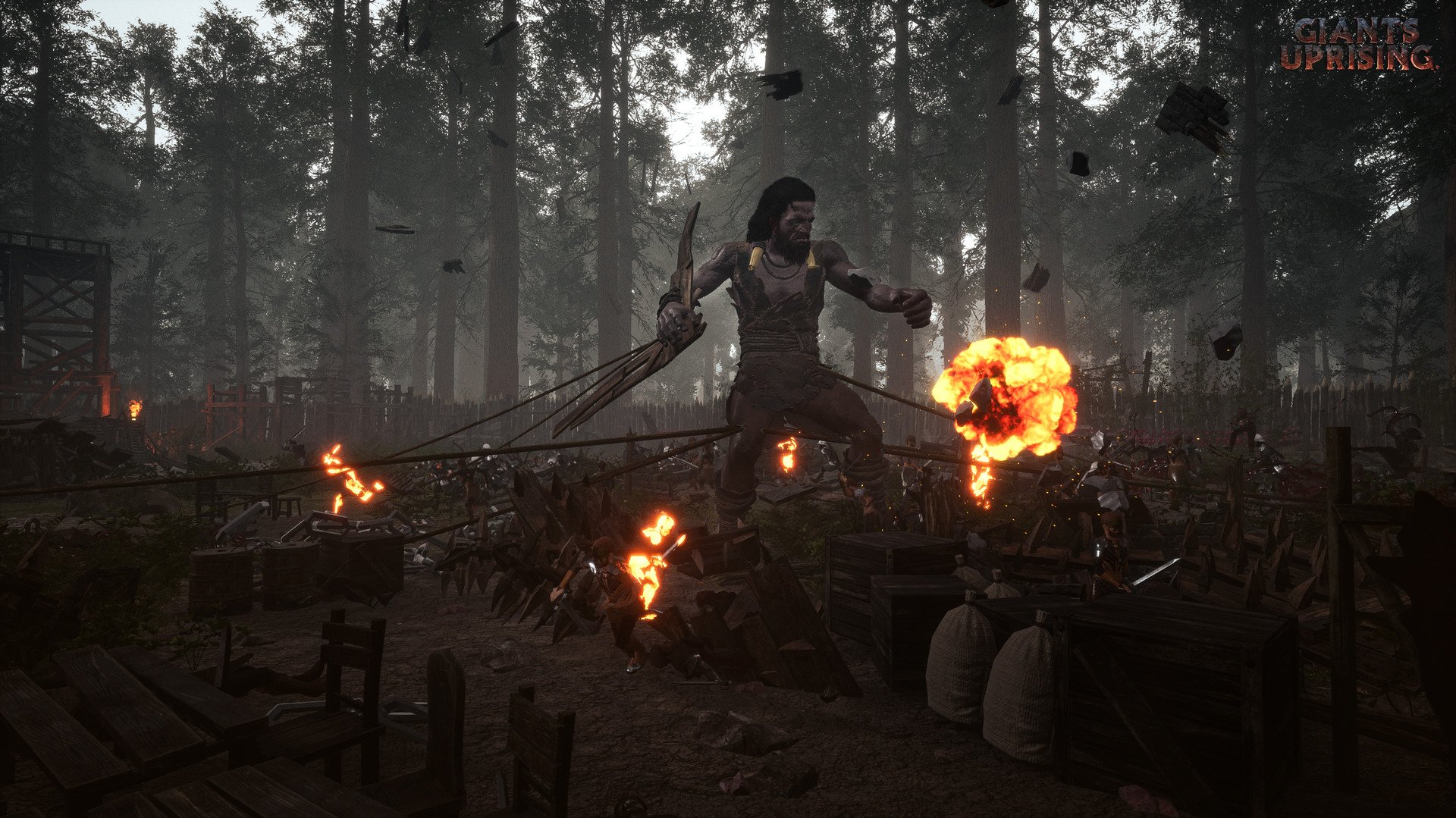 While there have been games in the past that have utilized a similar premise, I am kind of surprised more video games haven’t utilized the idea of playing as a giant creature destroying everything in their path. When I was a kid I really enjoyed the Rampage franchise. Sometimes it is fun playing as an overpowered creature that just destroys everything in sight. This is what intrigued me when I first saw Giants Uprising. I wasn’t specifically looking for a giant game, but the idea of destroying medieval villages with an overpowered giant sounded like it could be fun. Giants Uprising is already a pretty satisfying destruction game that could use a few tweaks and optimization to reach its full potential.

In the world of Giants Uprising humans and giants worked together for generations to the benefit of both societies. Over time though the giants started to loose their ancient wisdom and their civilization began to crumble. Sensing weakness human factions betrayed the giants and began enslaving them to take advantage of their size and strength. You play as a giant who escapes their imprisonment along with a human convict who you were teamed with before your escape. The two vow to reclaim their freedom and bring a reckoning to those who enslaved them in the first place.

For the most part the gameplay of Giants Uprising is exactly what you would expect it to be. You play as a large powerful giant who is tasked with destroying everything that stands in your way. The combat in the game mostly utilizes close combat attacks including punches, charges and stomps. When you destroy buildings you can also pick up remnants of that of building to use as weapons or as projectiles that you can throw. You have limited health and should you run out you will have to restart from the last checkpoint. Through your destruction you will find pieces of meat which you can eat to heal some of the damage you have taken.

At this point the game seems to have two main combat focuses. The first is a more melee style where you will face off against other giants. This entails blocking and avoiding their attacks while dealing enough blows to defeat them.

Of the two types of combat, I was less enthused about this aspect of the gme. In a way this plays like most other 3D action fighting games. As you and the enemy are both around the same size, it doesn’t really even feel like you are a giant outside of the environment that you are fighting in. This type of combat is fine. You can still feel the power of your giant and it is still fun beating up other giants. A lot of the combat though relies on holding the block button until you open up an opportunity to get in a couple punches on the other giant while they are stunned.

The other element of combat comes from having to face off against humans. As you are much larger and stronger than the humans on their own, they deal little damage to you. They significantly outnumber you though and have various towers that shoot projectiles at you. In these sections of the game you pretty much create as much destruction as possible while you focus on taking out key targets and enemies that are attacking you.

When I first saw Giants Uprising this is the element that intrigued me the most about the game. Who doesn’t want to play a game where you play as an overpowered giant that can easily destroy nearby buildings and absolutely destroy armies of soldiers with just one swipe of your hands? At this point this is where the game excels the most. The game does a really good job making you feel powerful in these situations. While there isn’t a ton of variety in these situations as you can just mash the attack buttons to destroy everything around you, it is just really satisfying being able to destroy almost everything around you without putting in much effort. If the idea of just causing mayhem and destruction is what intrigued you about the game, it is already on the right path towards giving you what you are seeking.

At this point I would classify the combat as more action/button mashing than methodical. In the giant battles you do need to dodge and block attacks or you will get pummeled and have no chance at hitting back. When you are attacking the humans though, the game becomes more of a button masher where you don’t need a lot of strategy. You need to somewhat pick which target to prioritize first as you need to get rid of the towers that shoot projectiles quickly, but otherwise you can just cause havoc however you want occasionally checking your current health situation. This approach to the combat serves the game well as I think it would have been bogged down if the combat relied on more precise parrying and dodging. Sometimes you just want to play a game where you can just destroy everything in sight.

Probably the only issue with this aspect of the game that I have right now is that the controls could use a little work. The controls are quite straightforward as there are a couple different attack buttons along with a block and a dodge. The combat of Giants Uprising is simple and to the point which benefits the game. The main problem that I have with the controls comes from your characters’ size in general. Giants/large creatures in general are not well known for their mobility as due to their size they are more lumbering. This makes total sense that the developers didn’t make the controls super tight as it would feel out of place if your giant could make quick precise moves like some sort of athlete. There are parts of the game where your character feels too sluggish though. I sometimes had trouble maneuvering the giant to get them to go exactly where I wanted them to. You can’t make the giants too mobile or it would ruin immersion, but the combat/controls feel a little off.

Other than the controls being a little sluggish at times, the other main thing that the game needs to work on at this point is optimization and polish. These issues are to be expected as almost every Early Access game has optimization and polish issues. On the polish front there are minor things like missions ending with just a “mission complete” message and buttons to start the next mission. This is not all that important at this point, but a little more flourish would be appreciated for the final release. As for optimization the game runs fine most of the time. I played the game on a PC above the recommended settings and it usually ran fine even though I could tell that it was testing my PC more than it probably should have. With the number of enemies and destructible buildings on screen at one time this is kind of expected. Where I noticed the optimization issues the most was during some of the attacks where I could easily see a drop in the framerate when performing the attack. This is more of an annoyance than game breaking, but is something that could be addressed as the game is further optimized.

As for Giants Uprising theming and story; there are things that are pretty good and others that could use some improvements. In general I thought the visuals look quite nice. The game isn’t going to compare to a blockbuster AAA game, but it still looks pretty nice. Destroying buildings and mowing down a bunch of human enemies with just one swipe is really satisfying. As for the story I thought it was okay. The game appears to actually be putting more thought into the story than you would think for a game about a giant that just destroys a bunch of stuff. The story is told through still images with voice acting played on top of it. The story in some ways feels a little cliched, but it is honestly more than I expected from this type of game.

Giants Uprising may not be a perfect game yet, but I think it is on the right track. The game is built round being a giant that has the size and strength to easily destroy everything around it. For the most part it succeeds in that task. The game does a good job making you feel powerful where you can easily destroy buildings and face off against a much larger army. There is just something really satisfying about destroying a medieval village. The controls feel a little too sluggish at times, but it is hard to deny the fun that comes from destroying buildings with a single punch. Other than the controls needing a few tweaks, the game could use some optimization and a little polish here and there. It may have some issues at this point, but it appears to be on the right path to give you the game of destruction that fans of this genre are looking for.

As for recommendations, I would say you need to consider two things. If the giant destroying villages theme doesn’t really appeal to you, I don’t see Giants Uprising being your type of game. Otherwise you should enjoy the game. Whether you should pick up the game right now or wait for some more updates depends on whether you are willing to follow the game through its development. The game is fun in its current state, but it is a little rough around the edges in a few areas. If this doesn’t bother you and the premise intrigues you, I think it is worth considering picking up the game. Otherwise I would maybe wait a little until the gameplay is refined a little more.