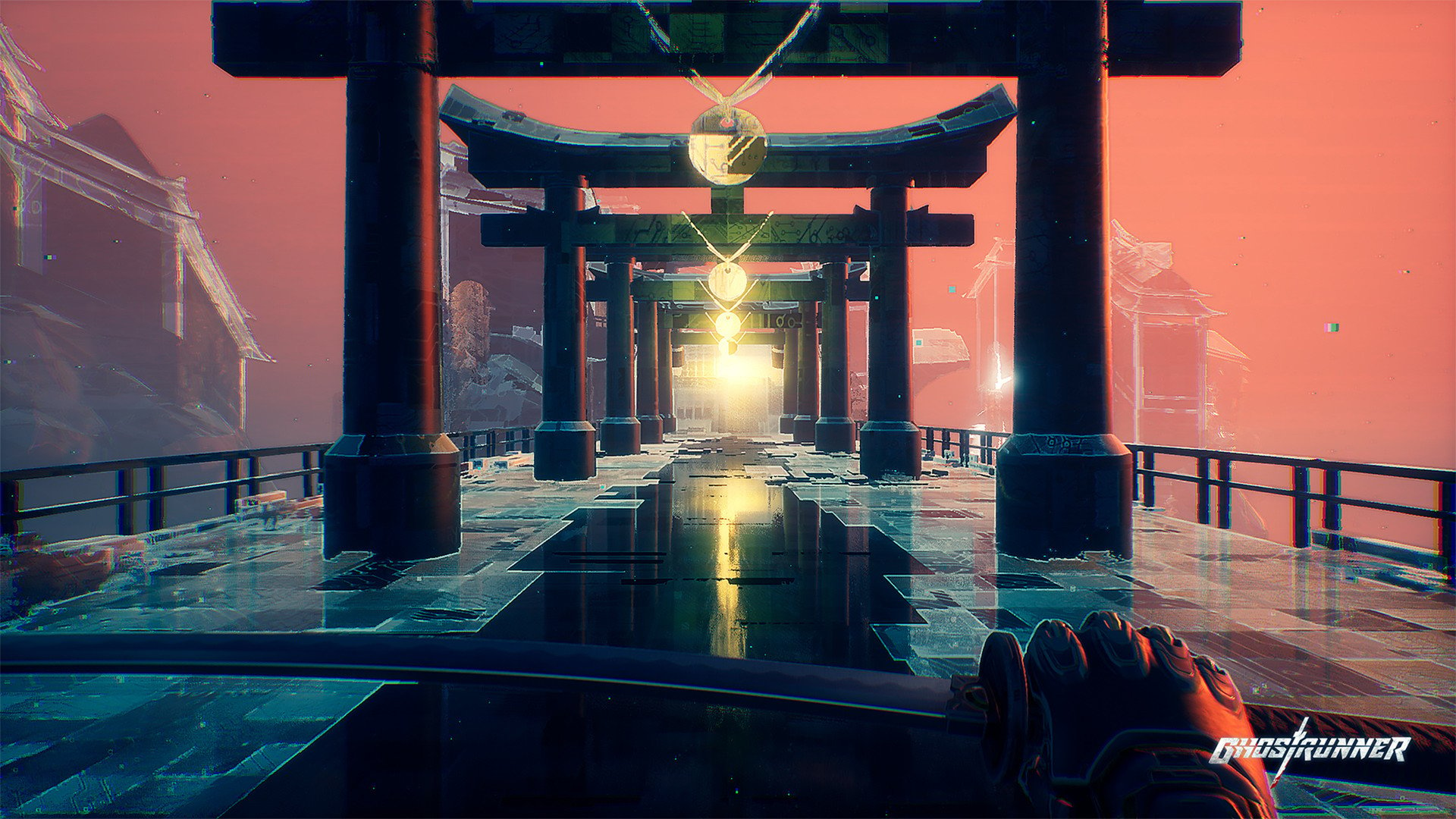 Platformers are arguably my favorite video game genre. There is just something really satisfying about a good platformer. While most platformers are either 2D or 3D you don’t see a lot of first person platformers. You don’t find a lot of games in this genre, but when they succeed they can be really satisfying. In particular I was a big fan of Mirror’s Edge as it did a great job at making a really satisfying parkour style game. I bring this up because when I first saw Ghostrunner it reminded me a lot of the parkour elements of Mirror’s Edge with a combat mechanic mixed in as well. For this reason I really wanted to check out the game. Ghostrunner does a fantastic job combining parkour and melee combat to create a highly addicting and satisfying race through a futuristic city.

In Ghostrunner you play as one of the titular Ghostrunners. Many years ago a world altering cataclysm has wiped out most of human kind. What is left of humankind lives at Dharma Tower which is run by the tyrannical Mara the Keymaster. Mara treats the people of Dharma Tower with a iron fist with little regard of what happens to the citizens. As the situation grows worse the citizens grow desperate to overthrow Mara. You as a Ghostrunner were sent to kill Mara but you failed and your body was thrown to the bottom of the tower. Your body is recovered and rebuilt from scratch for one final attempt to end Mara’s tyrannical rule. Can you succeed at restoring peace to the crumbling tower?

Ghostrunner is one of those types of games that don’t really fit neatly into an established video game genre. This is mostly because it features a number of mechanics from different genres that are blended together in order to craft its own unique thing. Probably the main mechanic in the game is platforming. Unlike many platformers though the game is in first person. In a lot of ways this element of the game reminds me a lot of the Mirror’s Edge series. The platforming in the game feels a lot like parkour. You have your typical jump and dash/short teleport in order to get over gaps. The game also relies heavily on wall running and you also utilize a grappling hook to move over larger distances. Much of the gameplay revolves around moving from location to location using unorthodox parts of the environment to make it across gaps.

Earlier I mentioned Mirror’s Edge. Anyone familiar with that franchise should have a good idea of what the platforming elements of the game feels like. While Ghostrunner has a number of other mechanics that are also really enjoyable, this is the element of the game that I enjoyed most. Honestly the platforming in Ghostrunner is just so satisfying. It is really quick and yet not overwhelming. The game does a fantastic job making you feel like you are running and jumping around a futuristic city. Due to visual clues the game usually makes it pretty obvious where you are supposed to jump next, but it is still so satisfying. I honestly don’t know if I have ever played a game that has had as satisfying of parkour gameplay as Ghostrunner.

Other than the platforming the game has a combat element. Throughout the game there will be locations filled with enemy soldiers. You are equipped with a sword so most of the combat is melee. Most of these enemies have guns while some also utilize close combat. In Ghostrunner all attacks are one-hit kills. If you hit an enemy with your sword they are immediately killed. The same holds true for you as well though. In order to avoid enemy bullets you need to use your platforming skills to use barriers and movement to your benefit. Another big key is using the dash button which slows down time to the point where you can dodge bullets. In these locations you need to kill all of the enemies in order to open up a path to continue your journey.

While not quite as satisfying as the parkour platforming, I thought the combat was also quite satisfying. It is really satisfying jumping between walls and platforms taking out enemies before their bullets are able to hit you. Between the ability to slow down time and using the environment to your advantage, the game does a great job making you feel super powerful. It is really exciting being able to pull off a hard combo of moves in order to defeat all of the enemies that stand in your way. In a way the combat kind of feels like a puzzle as you plan out your attacks in order to utilize the environment to avoid enemy attacks and take them out one at a time. Many of these situations have multiple ways to approach them which adds replay value and allows you some creativity in how you attack the enemies.

The thing with the combat though is that it is not easy. Unless you are an expert at the game you will likely die a lot in the game. This is mostly due to the game relying on a lot of trial and error. Your first plan is unlikely to work. Even if it does you need to perfect it as one wrong step and you likely will die due to the one-hit kills. Much of the combat comes down to trying something and when it eventually fails tweaking the plan to take into account why you failed the last time. You are regularly outnumbered so you need to be aware of your surroundings and where enemies are positioned in order to avoid being killed. This usually requires a few lives as you are unlikely to react to all of the enemies in time to avoid their bullets.

Generally I am not a big fan of trial and error in games. This is mostly because the time lost in reloading a level and getting back to where you were killed is kind of annoying. I will admit that some of the combat sections can become kind of frustrating as there are areas where I died quite a few times before I eventually succeeded. This could have derailed the game except that the game was wise in adding a lot of checkpoints to the game and the load times are minimal. Basically when you die in the game you lose very little progress as most checkpoints are just before a battle or a difficult platforming section. Dying is still frustrating, but you can quickly try again without wasting much time. This makes the trial and error mechanics a lot more bearable than they normally would be.

As for Ghostrunner’s story and atmosphere I think the game does a good job. In particular I thought the game did a very good job creating a unique world to explore. The graphics are quite impressive and really immerse you into the futuristic city. You could honestly spend a decent amount of time admiring the atmosphere. The catch is that through most of the game you will be moving so quickly that you will barely notice much of it as you are focused on jumping between platforms. As for the story it is pretty good. I wouldn’t say that it is highly original as it shares a lot of elements from many futuristic sci-fi stories, but it is still enjoyable.

Outside of the game requiring quite a bit of trial and error, Ghostrunner’s biggest issue is probably its length. How long it takes you to beat the game is likely going to depend on how good you are at the game. Those that rarely die will obviously finish the game quicker than others. It  seems like most players have been able to beat the game within about 6-8 hours. I kind of wish the game was a little longer though as the game is really fun. The game does have some replay value though. The game has quite a few collectibles to find which will add time. The combat sections are also designed in a way where you could approach them in different ways. For a game that is kind of linear I think Ghostrunner has a lot more replay value than you would expect.

When I first saw Ghostrunner I had pretty high expectations for the game as it looked like a fast paced thrill ride. I can’t say that I was disappointed by the game. The game has two main mechanics and both are quite satisfying. The parkour platforming sections of the game are fantastic. The game has a great sense of speed as you quickly jump between platforms and walls where it really feels like you are running through a futuristic city. Ghostrunner might have some of the best parkour style gameplay of any game that I have ever played. The combat works off of this as you combine platforming with melee attacks as you try to avoid enemy attacks. In a way this kind of feels like a puzzle as you figure out how to use the environment to your advantage. The combat relies on a lot of trial and error which can be kind of frustrating at times. Due to frequent checkpoints and fast load times though this is not nearly as bad as it could have been. Ghostrunner’s atmosphere and story are also pretty good. Probably the game’s biggest problem is just the fact that it ends too quickly. If the concept interests you at all though you will likely really enjoy your time with the game.

My recommendation for Ghostrunner is pretty simple. If the premise doesn’t intrigue you or you don’t care for the parkour or trial and error combat, Ghostrunner probably won’t be for you. Those that are at all intrigued by the premise though will likely love Ghostrunner and should definitely look into picking it up.