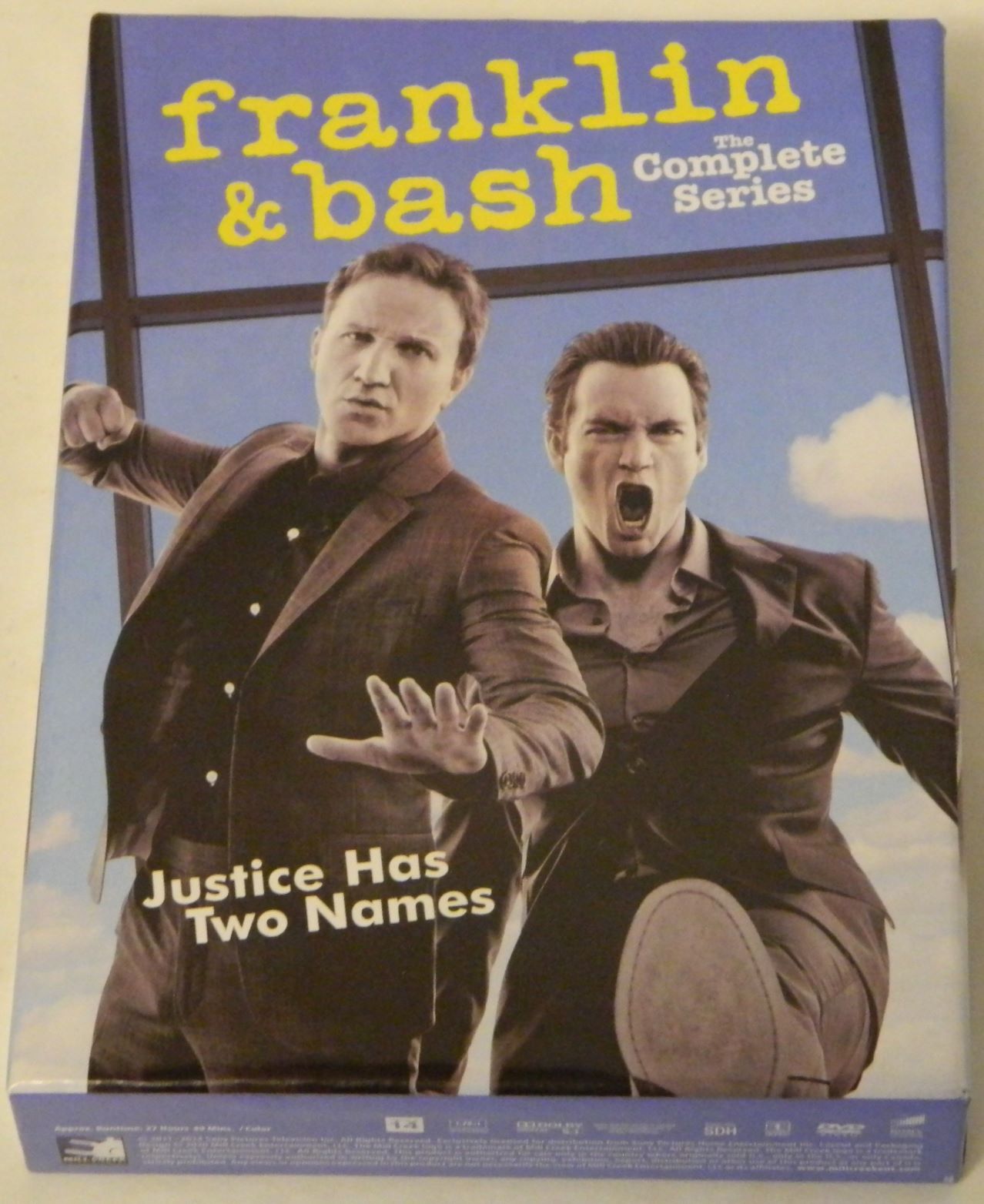 I’m certainly not the biggest fan of procedural TV series of any sort of variety (medical, police, or legal) and I will almost always pick a serialized show over a procedural any day of the week. However, there is one specific type of procedural series that I do highly enjoy. That specific sub-genre is the comedic procedural (think Monk, Psych, Burn Notice, and so on), which makes up for the lack or minimal amount of serialization with some good old-fashioned fun. I’ve watched nearly all of them from the ’00s at this point but pretty much took a break from them in the ’10s (the genre also kind of died down with USA Network, TNT, and Syfy shifting their strategies). That means that I did miss out on a few notable additions to the sub-genre, including TNT’s Franklin & Bash which I finally got around to checking out thanks to this DVD release. While I knew critics did not enjoy this one nearly as much as the classics in the comedic procedural genre, my main hope was just to find a reasonably funny show in Franklin & Bash: The Complete Series. I didn’t expect to enjoy it as much as those USA Network and other basic cable shows, I went in with relatively grounded expectations. All I was hoping for was a show that would provide a few laughs, maybe a few interesting legal cases, and some nice comfort food. If I would have went in with any higher expectations, I would have been greatly disappointed. Luckily I didn’t because Franklin & Bash: The Complete Series is about as mediocre as it gets. It’s certainly watchable (especially if you miss the comedic procedural genre) but nowhere near a must-watch. There’s some comedy here or there, but I was hoping for a bit more.

Franklin & Bash came to TNT in 2011, around the midpoint of their attempt to become basically the sixth broadcast TV network by running three nights of original programming a week. This shift in strategy was around the time syndication ratings started to tank but ultimately TNT’s aspirations never really came to fruition. Franklin & Bash was one of the more successful series launched during this time, lasting for four seasons and forty episodes. The show featured Breckin Meyer and Mark-Paul Gosselaar as the titular (Jared) Franklin and (Peter) Bash respectively. The two are best friends, “bros,” and lawyers who don’t play things by the book at all (and party harder than they work). They are showmen who will do anything from getting drunk in court (to help get a client off of drunk driving charges) to locking themselves into a magician’s style water enclosure to win a case. After beating a lawyer from highly-regarded law firm Infield & Daniels, they are recruited by Stanton Infield (Malcolm McDowell) to bring some life to their overly corporate operation. The two continue to focus on their patented offbeat cases like a woman accused of murdering her husband with sex, a guy who robbed a pizza joint with a “gun” made out of cheese (and promptly ate the evidence), and a real-life superhero charged with murdering a perpetrator rather than bringing them to justice. Most episodes of Franklin & Bash include two or three different legal cases, sometimes with the dynamic duo breaking off into separate cases with fellow Infield & Daniels lawyers Damien Karp (Reed Diamond) or Hanna Linden (Garcelle Beauvais). The pair also have two employees of their own, agoraphobic Pindar Singh (Kumail Nanjiani) and private investigator Carmen Phillips (Dana Davis). The show went through a pretty big shift in seasons three and four, dropping three series regular and replacing them with three new characters (including one played by Heather Locklear).

As there are literally hundreds of legal shows out there you can watch and even plenty of comedic ones for your viewing pleasure, shows like this have a lot of competition and thus need to do something unique or especially well to stand out. For Franklin & Bash, it’s pretty obvious they wanted to bring some comedy to the legal world. Unfortunately, the show has a sort of buddy comedy/frat boy type of humor to it which is one of my least favorite styles (as I am as far away from a “bro” as you can get). While some of the cases in this series are interesting (though very unrealistic from a legal standpoint between the antics they get away with and the cases somehow always magically going their way), the main point of Franklin & Bash is to bring the funny. And in that area, the show is just plain mediocre. There are some laughs in most episodes (Kumail Nanjiani’s Pindar is especially hilarious) but it’s a far cry from being a laugh-a-minute show or even in the range of a Monk or Psych type series. I feel like younger people who are more into a frat boy-type style of life would enjoy the comedy more than I did but there is just enough humor that I will still finish the show up after this review. I was just hoping for a bit more in this department.

One fun game to play with Franklin & Bash is spot the ’90s or ’00s television and movie stars as it has an absolute stellar guest star list. Featuring names like Jason Alexander, Danny Trejo, Tricia Helfer, James Van Der Beek, Tom Arnold, Beau Bridges, Fred Willard, Harry Hamlin, Sean Astin, Jane Seymour, Carmen Electra, and Cybill Shepherd, it’s a veritable cornucopia of stars from that era. One thing this series particularly likes to do is cast former stars as judges or prosecutors, some of which pop up in multiple episodes (actors like Ernie Hudson, Kathy Najimy, and Gates McFadden). Breckin Meyer’s Robot Chicken pal Seth Green also appears as part of the rival legal team Jango and Rossi in one of the funnier episodes of the series (mostly due to their banter).

Outside of my wish for a bit more humor and the show’s stellar cast, there really isn’t a lot to talk about with Franklin & Bash: The Complete Series. It’s a mediocre cable legal comedy that some might enjoy more than me, but it will likely max out as “comfort food” you watch while doing something else for most viewers. It certainly isn’t on the level of those amazing USA Network “characters welcome” shows, though I wasn’t really expecting it to be. Franklin & Bash is watchable but rarely above average.

Franklin & Bash fans will likely be very happy to finally have access to season four on DVD (as it was never released back during its run on television). Judging by the prices of seasons two and three (nearly as much as this entire package), I’m guessing (but can’t confirm) that those were MOD DVD-R releases (or possibly foreign releases that also work on region 1 players). Due to this, I’m sure this set will make a lot of people happy just so they have access to all of the episodes on DVD. Unfortunately, otherwise this set is a bit of a mess and a return to Mill Creek’s budget-oriented complete series releases (as I’m guessing they didn’t expect a huge demand for this series). There isn’t even a Blu-ray release of Franklin & Bash: The Complete Series, the packaging is a return to the sleeves in a box style packaging Mill Creek uses for a lot of their multi-disc DVD releases, and the video quality is unfortunately a pretty big problem. While this set is not overly compressed (as each of the eight discs only hold five episodes a piece), Franklin & Bash: The Complete Series sometimes looks like a show from the ’90s (or even earlier) in certain scenes. Outdoor scenes (which are thankfully not super common) look particularly bad but even some normal scenes shot on the show’s sets look noticeably bad. If you’ve read a lot of my DVD and Blu-ray reviews, you likely know that I don’t consider myself to be even close to an expert on video quality and even I noticed the imperfections on this release. Most of the content looks okay (though still easily below average), there’s just some very noticeably awful-looking scenes from time to time. Basically, this is a budget release through and through and you shouldn’t expect anything more than that if you order it.

Ultimately, Franklin & Bash: The Complete Series is about as average as it gets. While there are some interesting cases and comedy sprinkled here and there throughout the series, it rarely rises above a low 3/5 type show. The DVD release is a pretty good value (it’s currently going for $34.99 on Amazon at press time) but you also get what you pay for and this is an average to below average release on DVD. The packaging is quite cheap and the video quality on this set is mostly below average. Fans of Franklin & Bash who want the entire series in their physical media collection don’t really have much of a choice as this is their only option but just know that you are paying for the lower price with worse packaging and video quality as well.

Franklin & Bash: The Complete Series was released on DVD on November 17, 2020.