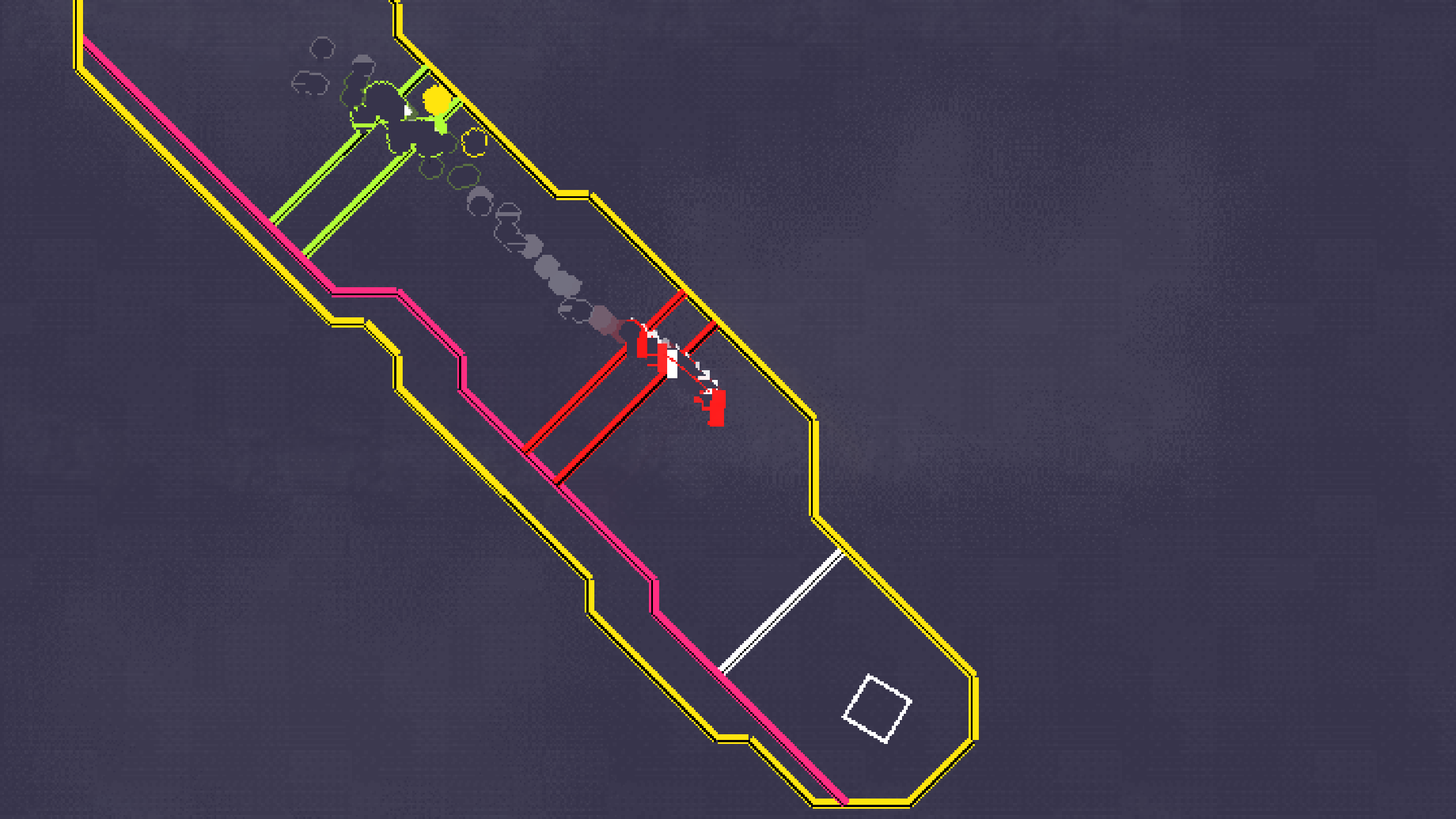 Did you enjoy the very strange fencing multiplayer game Nidhogg? Well Nidhogg’s creators are back with their latest game Flywrench which was recently released on Steam. Flywrench actually started life out as a freeware game back in 2007. The game has been polished up and now features 170 different levels. While I had never played the previous iteration of Flywrench, after seeing the game on Steam I was excited to try out the game. While the gameplay and graphics are simple and you will be dying constantly, it’s hard not to have fun with Flywrench.

A Simple But Engaging Game

In Flywrench you play as a spaceship traveling through the galaxy for some purpose. You must navigate various obstacles in order to complete each level. While navigating through the levels you will need to utilize the three different colors/forms of your ship in order to avoid different obstacles. For example if you run into a red barrier, you need to change your ship into the red form or your ship will be immediately destroyed. Each form also has an action associated with it. One form will be activated when you launch your ship upwards. One form will be activated if no buttons are pressed and the ship is in freefall. The final form will spin the ship allowing it to bounce off some of the walls without dying.

Along with these different forms the game introduces a new mechanic at the beginning of each planet. These mechanics include spinning platforms, enemies that shoot energy blasts at you, and even barriers that you can’t touch without dying. As more mechanics are added, they get blended together to create new elements and some interesting challenges.

What is most unique about Flywrench are the levels themselves. All of the levels in Flywrench are extremely short taking around 5-30 seconds to complete. The catch is that while the levels are short, they take considerably longer to actually finish. While you won’t die a ton in the early levels, you could die many many times in the later levels. In the time that it takes to read this sentence you could have died at least three times in Flywrench. You die a lot in the game because you need precise timing/movement in some of the levels in order to pass through all of the obstacles.

The good thing is that the controls are simple and precise. While you will die a lot, you really can’t blame the deaths on the controls. Flywrench only uses two buttons and an analog stick/directional buttons for movement. While the control scheme is simple the game provides a good challenge based on the level design. Just looking at Flywrench you might think that the game looks so simple that it can’t be fun. Flywrench shows that a single fun game mechanic is enough for a good game to be built around.

Prepare To Die A Lot

When I first saw Flywrench I was thinking that it was going to be a very difficult game. Usually these type of action games thrive on being difficult. While I died plenty of times, I have to say that for a majority of the game Flywrench was actually easier than I was expecting. Until you get to Venus (third to last world), the game’s difficulty is actually pretty manageable. Until the Venus level I would say that the levels are moderately difficult. You will encounter some levels that will kill you many times before you end up succeeding but there are also levels you will beat on your first attempt.

When you reach the Venus levels the game start cranking up the difficulty pretty significantly. At this point the margin for error decreases significantly. Where you had some room/time to position yourself in the earlier levels, that is all but eliminated in these later levels. You need to move quickly and precisely or you are going to die repeatedly. These later levels require more memorization/repetition as you will have to perfect your path in order to prevent yourself from dying. While I quickly finished a lot of the earlier levels, you could end up spending 15-30 minutes finishing a level that is only 15-30 seconds long. Because of this shift in the difficulty, so far I have only finished about half of the Venus levels and only a couple of the Mercury levels.

Usually the frustratingly difficult games where you die over and over again drive me nuts. I do not enjoy playing a level over and over again having to repeat the same sections time after time. The good news with Flywrench is that due to the short length of the levels, the punishment for death is minimal. You don’t have to waste a bunch of time backtracking through the same areas over and over again. Since you will die a ton, this prevents the game from becoming frustrating. The short levels also allow you to easily practice a section of a level that you are having trouble with.

Since I have yet to complete Flywrench, I can’t give you a set time of how long it will take to fully complete Flywrench. At this point I have finished all of the levels leading up to the Venus levels and I have finished about half of the Venus levels. To reach this point I have played the game around three hours. I would estimate that it would take around five hours to complete the whole game. If you excel at these types of games, the game may take closer to four hours to complete.

In addition to the 170 levels in the game, Flywrench includes a time trial mode where you can play all of the levels in the game in order to try and complete them as quickly as possible. Due to the levels only taking seconds each, the time trials are based on completing all of the levels on one planet. The game also includes a level editor where players can create levels and share them with other people. If Flywrench develops a good community many interesting and challenging levels could make their way into the game. If you like time trials or community built levels I think you could add a decent amount to your overall play time.

Currently Flywrench retails for $9.99. Some people are going to say that is too much for such a simple game. While I liked the game, I do agree that $10 is too much for some people. If you like the idea behind the game but don’t like frustrating games where you have to attempt the same level over and over again until you perfect it, I would say that $10 is too much. You may reach a point where you end up giving up on the game and I don’t know if the game is worth $10 if you can’t enjoy all of the levels. If the game’s concept still interests you though, I would look into the game when it goes on sale.

While the game is not much to look at and has next to nothing for a story, Flywrench  makes up for it with what matters most, gameplay. The gameplay is really simple but well executed. Flywrench is built from a couple fun mechanics that the developers did a good job utilizing to create interesting levels that challenge players.

While a majority of the game is moderately difficult, the later levels do become quite hard. You will die a lot. Flywrench isn’t as frustrating as other difficult games though since the levels are so short that you only lose a little progress every time you die. Sometimes the levels require precise timing but you can easily practice a difficult area since you don’t have to waste much time redoing sections that you have already completed.