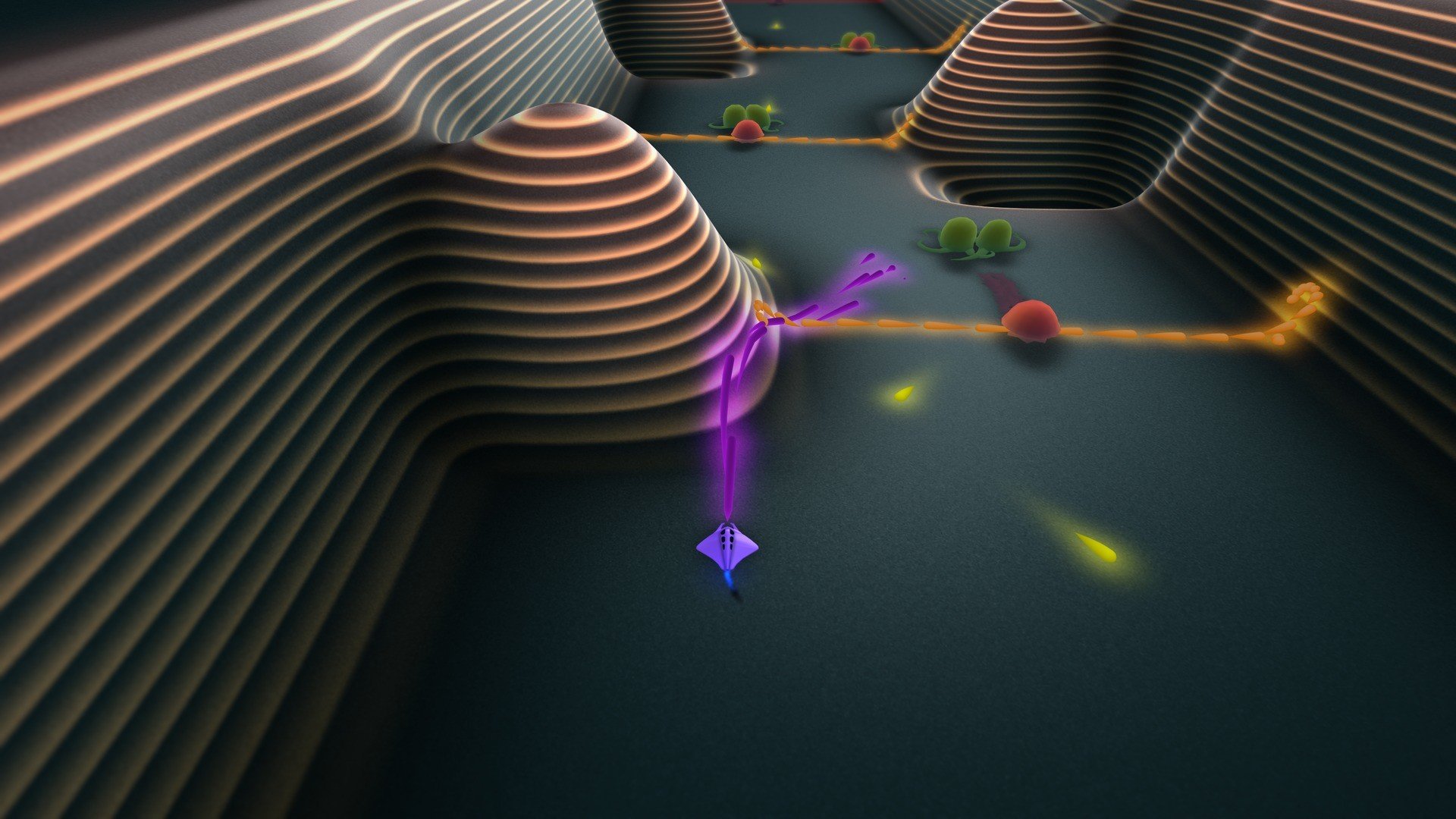 While I don’t mind the shmup/shoot ’em up genre, I wouldn’t really consider it to be one of my favorites. I think the biggest issue that I have always had with the genre is just the fact that I have never been very good at them. I think this has a lot to do with the fact that I am not very good at avoiding tons of projectiles on the screen at the same time. I don’t mind occasionally playing a game from the genre, but I wouldn’t actively pursue games from the genre unless they do something unique to stand out. That is one of the things that intrigued me about the game Flowing Lights which comes out today. In addition to your typical shmup mechanics, the game has also attempted to add in a puzzle mechanic. Anyone familiar with this site will know that I love a good puzzle game so I wanted to check it out. Flowing Lights is an interesting blend of a puzzle and shmup game that is pretty enjoyable, but might not be for everyone.

In Flowing Lights you play as a space ship that has become trapped on an alien planet. Your ship is too damaged to leave as it can’t overcome the planet’s gravity. Your sensors detect a area of the planet where the gravity is weaker giving you an opportunity to escape. Standing between your current location and that position though is a large number of alien creatures that want to prevent you from escaping. Can you safely find a way to escape the planet and make your way home?

If I were to describe Flowing Lights’ gameplay I would say that it reminds me a lot of old arcade style shmups/shoot ’em ups. The game is divided into worlds that are broken up into small sections. Each section has a number of enemies that you have to eliminate to clear it. Most of these enemies will fire projectiles at you which you have to avoid. The game also gives you two different weapons to deal with the enemies. First you have a typical fast firing gun whose projectiles are a little weaker. You are also given a weapon that you can charge up. You do this by pressing a button to start your shot and then moving your ship to aim and add more power to the shot. While doing this the game gives you an outline of where the projectile will move. Once you defeat all of the enemies in a section you will clear it allowing you to move onto the next section. Depending on how quickly you complete the section as well as specific objectives, you will receive a rank from C to S. The game also has a global leaderboard which you can compare your own scores against.

At this point the game may sound like most other shmups, and you would be right. The thing that differentiates Flowing Lights from the other games in this genre though is that it actually adds a puzzle element into the mix. This mostly comes from two areas. First is the aimed shots that I mentioned earlier. You could go in guns blazing, but in many situations there is a more elegant solution. To complete many of the objectives you need to make shots where you eliminate two or more enemies with just one shot. In a way this kind of feels like Pool as you are trying to figure out how to launch your bullets to hit multiple enemies at the same time.

The other area where the game differentiates itself is with the terrain. Many games in this genre utilize a flat playing surface where you don’t have to worry about how the terrain will impact the trajectory of your shots. This is actually a critical element of Flowing Lights. As you are playing on an alien world there are many peaks and valleys that you need to deal with. Your projectiles flow like a liquid so they will be impacted by the terrain. The game uses this to add many of the puzzle elements to the game. In many situations you need to aim a shot utilizing the terrain to hit an enemy.

Heading into the game I was kind of curious how the puzzle elements would work in a shmup game. The two genres are honestly quite different from each other. I was surprised that the puzzles mechanics actually work pretty well with the shmup mechanics. The game kind of switches off between the two elements. Some level sections prioritize puzzle solving while others focus on the shmup elements. As I mentioned earlier the puzzle elements honestly kind of reminded me of playing Pool. You have to line up your shots utilizing the helpful guide lines that tell you where a shot will travel. As you progress through the game you will also encounter different types of enemies which change how you approach a situation.

For the most part I thought the puzzle sections were well designed. Early on they mostly revolve around finding the right angle to shoot at to hit all of the enemies. As you progress through the game though a number of new mechanics get introduced giving you new ways of approaching situations. I am not going to get into specifics, but I found some of these to be quite clever. The game deserves credit for its level design as it does a good job introducing new mechanics and then finding new ways to combine them with the other mechanics introduced earlier in the game. The game does a good job mixing things up between levels to keep the game interesting.

While I enjoyed the puzzle sections, I didn’t like the shmup elements as much. This mostly comes from the fact that I am not a big fan of the genre in general. The shmup elements are pretty typical of the genre. Mostly you need to just avoid enemy fire while shooting bullets to eliminate all of the enemies that stand in your way. I am far from an expert at this genre, but I found some of these sections to be pretty difficult and frustrating at times. There is some trial and error in these sections as there are a lot of projectiles that you have to avoid. Some of the sections require pretty precise timing and positioning as you need to shoot from specific areas in order to hit enemies. Most of the levels are pretty easy to at least finish, but some took me quite a few attempts. When you add in achieving higher ranks, the game should be able to challenge most players.

As for the game’s length it will somewhat depend. Each of the game’s worlds is broken down into around 20 or so mini sections. The game has around 200 total sections spread throughout the worlds. These sections are quite small. To get most of the top ranks you need to finish a section within 20-30 seconds. If you breeze through the sections you should be able to finish the game pretty quickly. You likely will fail most of the levels at least a couple times though. If you are a perfectionist that wants a S rank in all of the sections, the game is likely to take considerably longer. I wouldn’t say that Flowing Lights is super long, but it is not particularly short either. If you are a fan of this genre you likely will get your money’s worth out of the game.

I didn’t really know what to expect from Flowing Lights before I ended up playing it as I wouldn’t consider myself the biggest fan of the shmup genre. I wouldn’t say that Flowing Lights is a perfect game, but it has some unique new mechanics for the genre. In particular I really liked the puzzle elements as you need to aim shots to take advantage of the peaks and valleys of the surface. The game has some good puzzle design as you need to think about your shots as well as use the game’s mechanics in new ways. The level design for the most part is quite good. Probably the biggest issue I had with the game just came from the fact that I have never been a huge fan of shmup games. Some of the sections in the game can be kind of frustrating as there is some trial and error in figuring out the right shots to defeat all of the enemies.

My recommendation for Flowing Lights comes down to your thoughts on shmup games and the premise of adding puzzle elements to the genre. If you don’t really care for either genre, I don’t see the game being for you. If you really like either genre and think the combination sounds interesting enough, I think you will enjoy Flowing Lights.