How to Play Flip Your Lid 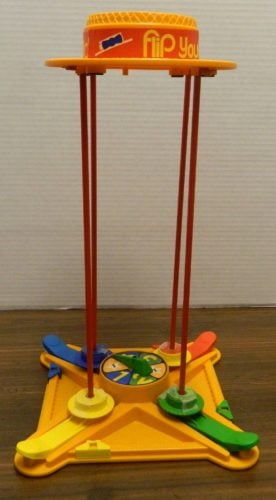 A player begins their turn by spinning the spinner. If the spinner lands on a number, the player has that many attempts to try and get their hat to stick to the large hat at the top of the gameboard. 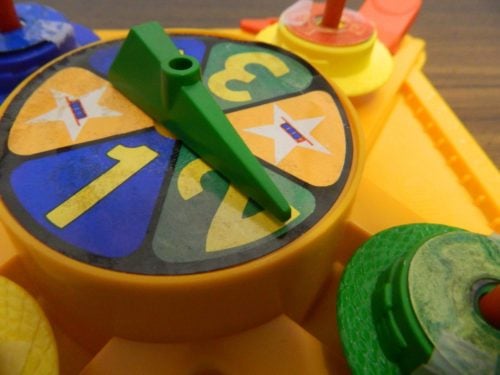 This player will get two attempts at trying to get their smaller hat to stick to the larger hat.

To launch your hat you press down hard on your launcher. If your hat sticks to the larger hat, you score a point by moving your marker one space on the scoring track. Once a player scores a point they don’t continue shooting even if they have more attempts remaining. If the player fails to get their small hat to stick to the larger hat within their number of attempts, their turn ends without them scoring any points. 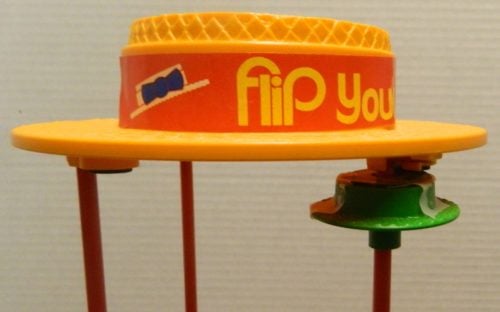 The green player has gotten their hat to stick to the larger hat so they score a point.

Instead of choosing to shoot their own hat, the player can challenge another player. The challenged player gets as many attempts as the number that was spun. If they succeed they score a point. If they fail they lose a point. 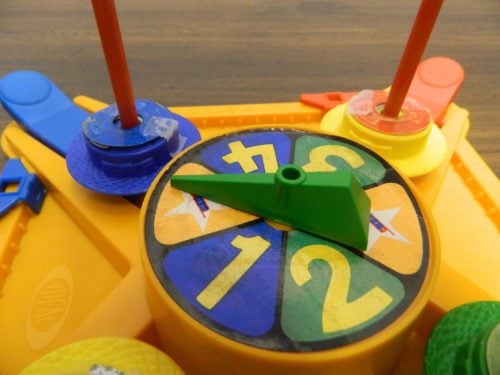 A star has been spun on the spinner. All of the players will race to be the first to get their hat to stick to the larger hat.

The blue player has scored ten points so they have won the game.

My Thoughts on Flip Your Lid

Being designed for children ages six and up it should not be a surprise that Flip Your Lid is a simple game. Basically all you do in the game is spin the spinner and hit your lever to launch your hat into the air. The goal is to get your hat to stick to the larger hat. The game has a challenge and a free for all mechanic but that is basically all there is to the game. I can’t see it taking more than a minute to teach the game to new players.

When you look at Flip Your Lid most people will probably see a stupid little children’s/family dexterity game. That is basically exactly what you get with the game. The game is far from complex, has next to no strategy and its arguable whether the game even has much skill involved. Despite all of this I still had some fun with the game. There is just something satisfying about these type of mindless dexterity games. You don’t really have to put any thought into the game and you can just enjoy it for what it is. For some reason it is fun launching the hats hoping that they will stick to the larger hat.

The problem with Flip Your Lid is that this enjoyment doesn’t last as long as you would like. With how simple Flip Your Lid is, it is not surprising that the game gets repetitive pretty quickly. With only one real mechanic you end up just doing the same thing over and over again in the game. After a game or two this is going to feel pretty tedious. With most games only taking five to ten minutes I could only really see playing the game for 15-20 minutes before putting it away for another day. There is a chance that children will enjoy the game for longer but at that point it is probably going to get pretty repetitive for adults. I could see bringing the game out every so often but I don’t see Flip Your Lid being a game that you are going to play regularly.

Other than there really only being one mechanic, the biggest problem with Flip Your Lid is that the game is too easy. I would say that most people will succeed most of the time if they get two or more attempts. The reason that the game is so easy is that the game really only tests one thing. In order to succeed all you have to do is apply the right amount of pressure to the launcher. Apply too little and the hat doesn’t go high enough to reach the large hat. Too much pressure will lead to the hat failing to stick to the larger hat. With two or more attempts it is easy to adjust from your first shot(s) in order to apply more or less pressure and get the hat to stick. Since the hats are on a rod, there is no need to aim. Once you know how much pressure to apply, you can regularly get your hat to stick on your first attempt.

This further illustrates that Flip Your Lid relies pretty heavily on luck. There is not much luck involved with launching the hats. Most of the luck involves the spinner. What the players spin has a pretty big impact on how well they are going to do in the game. As I mentioned earlier most players will usually succeed if they get two or more attempts. Players who regularly spin higher numbers are likely going to score on their turn. Meanwhile players who spin lower numbers or a star have a lower chance of winning the game. Since all of the players have the same odds of winning a free for all, a player basically wastes their turn whenever they spin a star.

While the challenge mechanic was likely added to add some more strategy to Flip Your Lid, I don’t have much of an opinion on it. I like that the game gives you another choice when you spin a low number, but players are still usually better off just shooting themselves. By challenging another player, you give them the opportunity to score another point. Since it is pretty easy to score, it is usually not a good idea giving the other players more opportunities to score. If the player fails they lose a point which is nice. The problem is that this benefits the other players as much as it helps you. You would be better off trying to score another point for yourself since you then gain a point on all of the other players.

When judging the components I will begin by saying that the game is a children’s game from 1976. No matter how well the game was taken care of, a 42 year old children’s game is going to show signs of wear. In a lot of ways I want to give Flip Your Lid credit with regards to the components. The plastic components of the copy I found have held up surprisingly well for their age. I do think the score tracks could have been designed in a way where you could slide them instead of having to pick them up and move them to the next space.

The biggest problems that I had with the components come from the stickers. The designers probably never considered how long the stickers were going to last but at least with my copy they are starting to peel off which causes problems. The sticker on the spinner slows down the spinner whenever it passes over the part that is peeling off. The biggest problem is that the hats use a sticker to hold the metal piece that sticks to the large hat. While playing the game all of these stickers peeled off which makes it impossible for the hats to stick to the larger hat unless you glue/tape the sticker back onto the hats. This is not a huge issue but at this point most copies of Flip Your Lid are going to require some TLC.

Should You Buy Flip Your Lid?

Flip Your Lid is basically the very definition of a mindless children’s game. The game can be taught in a minute and can be played by anyone. You can have some mindless fun with the game because it is kind of fun to launch the hats. The problem is that this fun is limited. It is too easy to get your hats to stick to the larger hat which makes the game repetitive pretty quickly. The only skill in the game is applying the right amount of pressure to the launcher which doesn’t take that long to figure out. Once everyone gets a hold on how much pressure to apply, the game comes down to who spins the best. Being 42 years old has also lead to the components needing some TLC in order to work properly. Flip Your Lid is not a terrible game but it is a game that you will only want to play for 15-20 minutes at a time and then put away for quite a while.

If you don’t like mindless children’s dexterity games, Flip Your Lid is not going to be for you. If you like these type of games though, you might have some fun with Flip Your Lid. With it being a game that you will only play in short doses though, I would only recommend picking it up if you can get a good deal.

If you would like to purchase Flip Your Lid you can find it online: eBay