Airing from 1978 until 1991 Dallas was one of the most popular shows on television during that time period. The show was popular enough that Larry Hagman, who played J.R. on Dallas, was approached by Mattel to endorse a game they were developing which became the 1985 game Flip Out. I have never watched Dallas so I am not positive of this fact but I believe Flip Out has nothing to do with Dallas and mostly used Larry Hagman in order to capitalize on the popularity of the show. Having never seen Dallas and thinking the game’s concept was kind of stupid, I can’t say that I had high expectations for Flip Out. Flip Out is one of those games whose boring and terrible gameplay leave you wondering how it was ever made in the first place.

How to Play Flip Out 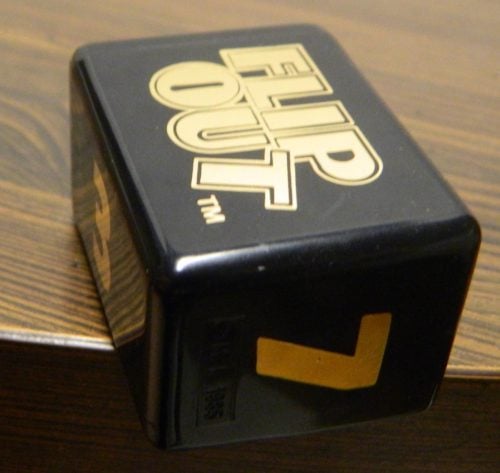 The stone is ready to be flipped.

On each player’s turn they will flip the stone and see which side is face up. If one of the numbers is face up, the player scores the corresponding number of points. 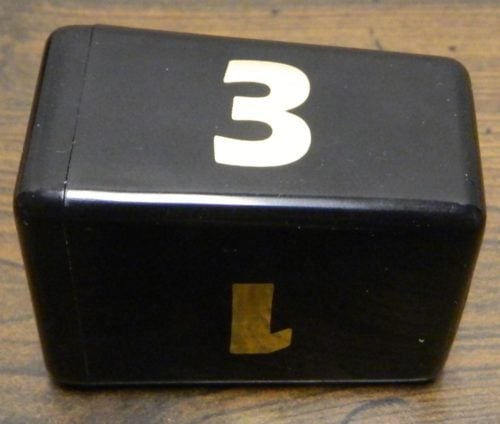 This player has gotten a three. They will score three points.

The player then has two options.

If the player chooses to flip the stone again they can continue to flip it as many times as they want until they either decide to quit or they get the Flip Out symbol. When a player rolls the Flip Out symbol their turn ends immediately and they lose all of the points they earned on their current turn. 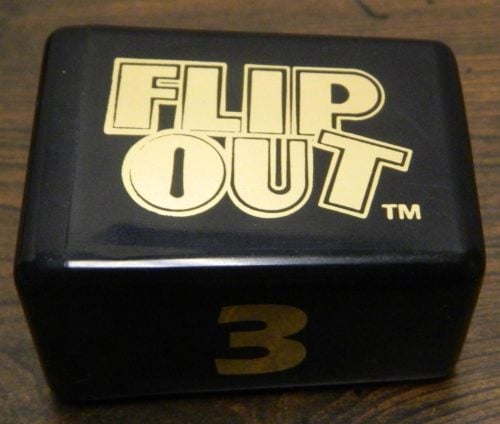 This player has gotten the flip out symbol. They have lost all of the points they earned this turn.

Play continues with each player taking their turn until a player ends their turn with 21 or more points. When this occurs a sudden death round begins. All of the other players have one turn to try and get a higher total score than the player who scored more than 21 points. If a player successfully beats the player’s total, a new sudden death round begins with all of the other players having one turn to beat the new high score.

Flip Out has an additional game called Lucky 13 that you can also play. The game follows most of the same rules as the normal game with a couple slight tweaks.

The goal in Lucky 13 is to end your turn with 13 points and then roll a Flip Out symbol. In this game you cannot voluntarily end your turn. Your turn ends when you roll the Flip Out symbol. You don’t lose the points you acquired during your turn though. When a player’s score goes above 13, on their next turn all of the numbers they roll will be subtracted from their total. Each turn all of the player’s rolls either add or subtract from their current total.

The first person to score exactly 13 points and then roll Flip Out will win the game.

My Thoughts on Flip Out

Flip Out is a board game that truly defies explanation. I will gladly admit that I have never played anything like it before. While the game deserves some credit for doing something new, it doesn’t mean that Flip Out is actually a good game.

I think the best way to describe Flip Out is to say that it is pretty similar to your typical dice rolling game. Players take turns rolling the die trying to add to their total. The game has a light press your luck mechanic as players can keep rolling the die to score more points and risk losing everything or they can stop and bank all of the points they had earned up to that point. This itself is not that original as there are quite a few other dice and card games that have the same premise. What makes Flip Out unique is what it decided to do with the dice itself and how you “roll” the dice.

It is kind of hard to describe the exact shape of the die/stone in Flip Out. Unlike your standard die, the stone is not a square so you don’t have the same odds of rolling every number. The stone is more rectangular but some of the sides are at an angle so it is not even a normal rectangle. This creates a situation where the stone is significantly weighted to land on either the one or the Flip Out side. This means that you can’t just look at the stone to determine your odds of rolling a particular face.

The other area where Flip Out is kind of unique is how you “roll” the stone. You do not roll it like a normal die. Instead you place the stone at the end of the table and kind of flip it into the air. The game doesn’t really tell you exactly how you are supposed to do this so there is some flexibility in how the players decide to flip the stone. You can flip the stone high in the air or try to flip it closer to the ground. All that is guaranteed is that the stone is likely to fly all over the place. As the die is weighted towards the Flip Out and one sides you need to try and get the die to rotate in the air if you want to get any of the other sides to appear face up.

While I think Flip Out is a terrible game, I will admit that there is more skill in flipping the stone than I first anticipated. There is still a pretty high reliance on luck but players can get better at the game the more they play it. As I mentioned the key to getting higher numbers on the die is being able to get the stone to rotate when it is in the air. If you play the game enough you can start to develop a method on how to flip the stone to improve your odds of getting it to land on one of the other sides.

The fact that there is some skill to flipping the stone doesn’t make up for the fact that Flip Out is a really boring game. Basically the game boils down to taking turns rolling a die trying to avoid one of the sides. The press your luck mechanic doesn’t add much to the game as it is usually pretty obvious what you should do at any time. If you ever roll a high number or get a total that is higher than like five you should consider banking your points. You will rarely be able to roll more than two or three times without rolling the Flip Out symbol, as the die is weighted towards rolling it, so there isn’t a lot of press your luck in the game. Flipping the stone the first couple times can be kind of fun but it becomes repetitive really quickly. There just isn’t much to the game as all you are doing is flipping the stone over and over again until someone finally wins the game. You are left with a game that feels kind of pointless and becomes boring quickly.

Should You Buy Flip Out?

I didn’t have high expectations for Flip Out and my initial impressions were pretty much spot on. Flip Out is a unique experience but that does not make up for it being a pretty terrible game. The first couple of times you flip the stone can be kind of fun and there is some skill to it. Unfortunately that is basically all there is to the game. The press your luck mechanic isn’t much as you should probably stop whenever you roll more than a couple points as you are likely to lose everything if you continue flipping the stone. You are left with a game where the players take turns flipping the stone until someone finally scores enough points to win the game. This goes on for much longer than you would like. All of this leads to Flip Out being a really boring game that is kind of stupid.

If you would like to purchase Flip Out you can find it online: Amazon