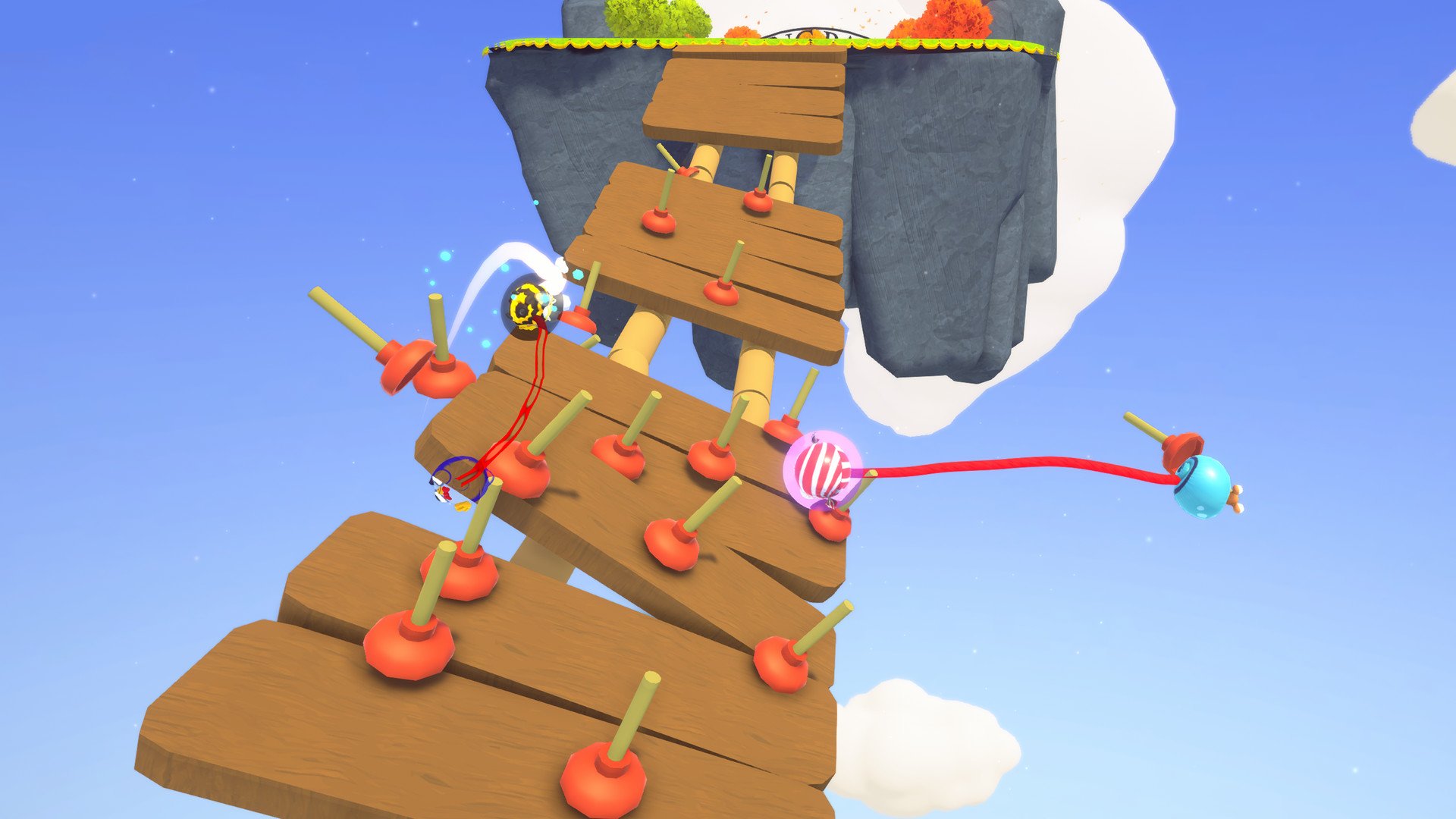 When I first saw Fling to the Finish I knew that it was a game that I had to try out. Any regular readers will know that I love cooperative games and also games that utilize a unique premise. Fling to the Finish was the perfect combination of both as two players are tethered together and must navigate an obstacle course as quickly as possible. I could tell the game would be silly and that is one of the things that intrigued me the most. Despite just entering Early Access Fling to the Finish is already on the right track to becoming a really fun and silly party game that any fan of cooperative games should have a blast with.

In Fling to the Finish you and a teammate are tethered together. The game is broken up into a number of stages with various obstacles that you have to overcome. As both characters are spheres you will roll along with your teammate trying to avoid getting your tether stuck on objects you encounter along the way. In addition to rolling you also have access to a single jump. This can be used along with the ability to stick to surfaces in order to climb walls and move along surfaces that you would otherwise fall off of. When one character is stuck to a surface they can press a button which will yank the other player forward dependent on how stretched out the tether is.

There are a number of different modes in Fling to the Finish. Probably the mode that will interest most players is the races against other teams. Teams of two will compete against one another locally or online to see who can complete a course first. Teams can get in each other’s way and generally mess with one another. If a team falls behind they will also get the opportunity to use power ups in order to mess with the teams in the front. Whichever team reaches the finish line first will win.

The other main mode is the campaign. The game doesn’t have a story at this point so the campaign is more about completing the stages in order to unlock additional characters to use in the rest of the game. The campaign is broken up into a number of stages with each stage at this point having three different challenges that you can try to complete in it. You can race against UFOs which basically is a time trial where you receive rewards based on how fast you can reach the finish line. The duck challenge places three ducks into the stage which players need to find and collect before reaching the end. These ducks are hidden usually along alternative paths or in difficult to reach areas which are hard to spot. Finally there is a coin challenge. The objective is to collect 100 coins and reach the finish line as quickly as possible.

I am always a little skeptical of games when they first enter the Early Access process as the quality of games can vary quite a bit. Despite this I actually had kind of high expectations for Fling to the Finish as it felt like a game that was perfect for me as someone who loves cooperative games and silly games in general. After playing the game I have to say that I was actually kind of surprised. It is rare to find a game that is so polished that you honestly wouldn’t even be able to tell that it was an Early Access game if you didn’t already know that fact. Honestly outside of a few tweaks here and there and some additional content that will be added later, the developers could have released the game as a full game and I wouldn’t have been disappointed.

As a cooperative game Fling to the Finish works really well. It is kind of hard to explain exactly what it is like playing the game. It plays a lot like your typical race game, but also different. There is the obvious fact that two players are tied together, but there is also a sense of platforming as timing your jumps and flinging yourself across gaps is a big part of the game. The game is really easy to play as you mostly just steer your character trying to avoid obstacles. You also can jump, grab onto surfaces, and fling your teammate. All of these mechanics are really straightforward where you can learn how to play the game in like a minute. This is a good thing as the game is one that feels like it was designed for party situations. The game can be played online or locally with players even being able to share the same controller.

Outside of just being really easy to play, Fling to the Finish is just silly fun. It is the type of game where it is hard not to smile and laugh while playing. It is hard not to “yell” at your teammate as you try to navigate tough obstacles and fail miraculously. This is one of the main reasons that the game succeeds. The game is not meant to be taken seriously. You are meant to just have a good time as you and your teammate flounder to the finish line. Races are quick as you should be able to finish one within just a couple minutes unless you keep failing. After you finish a race you will want to play another one. There is just something really satisfying about rolling down a mountain quickly as you try to beat the other team.

One thing that I was a little surprised by was the campaign mode. The game has no story at this point and I doubt it will have much of one if any when the final version is released. What I really liked about the campaign is that it features a number of modes other than just racing against other teams or the clock. The mode that intrigued me the most was the hidden duck challenge. I am surprised by how much I enjoyed this mode as instead of racing as quickly as possible it rewards players for keen eyes and taking a path that is generally more challenging than the typical path. This mode really showed that the game has the potential to be more than just another racing game. In a lot of ways I actually preferred this mode over the normal races. As the game is planning on adding more modes to the game, I am intrigued to see what else the game can do with the mechanics.

Another thing that I was genuinely impressed with was the overall atmosphere and level design of the game. I honestly thought the levels would be pretty basic at this point mostly built to show off the concept which the game would further explore as it was further developed. The levels are designed really well already though. Each level has its own unique look and the visuals are quite good. Even better is that the game actually utilizes the theme into the layout of the levels. For example the casino level has you dealing with playing cards, rolling dice, and even spinning wheels. These are more than just cosmetic as they actually are part of the obstacles that you have to overcome. The game also features a pinball level where you have to move through various pinball machines. The game has a lot of character and it doesn’t shy away from the game’s overall silly premise. This aspect of the game is a real standout at this point.

Speaking of the levels I was also quite surprised by the amount of content already in the game. With the game expected to be in Early Access for six to eight months, I thought the amount of content would be kind of limited at this point. The game already has twelve different levels which are quite detailed and very different from one another. If you just play each level once you might not get a lot of time out of the game, but the game really encourages you to play each of the levels many times. The levels are interesting enough where you should enjoy them quite a few times before they start to get repetitive. As the developers are planning on almost doubling the amount of content that is already in the game, I am excited to see what the final game looks like.

Honestly I don’t really have much to complain about as it relates to Fling to the Finish. Probably the only issue that is worth mentioning is that the controls could use a little tweaking. Most of this comes from the flinging mechanic. Maybe we were just doing something wrong, but how your teammate is flung felt kind of random. This regularly lead us to have to fling our teammate a couple times before we were able to get them into the position we wanted. This is mostly more of an annoyance as it usually only applies in the hidden duck mode as otherwise you are racing so quick where it doesn’t really matter. How you interact with some of the obstacles is a little odd as well. Otherwise there are a few minor issues here and there with the controls that some minor tweaking should easily fix.

As I mentioned earlier in this preview, I am always a little leery of Early Access games. There are plenty of good games that go the Early Access route, but there are many bad games or games that are a little rough when they are first added to Early Access. Neither describe Fling to the Finish as it already feels like a complete game. I was mostly intrigued by the game as it looked like a silly cooperative game, and it succeeds in both areas. The game has a charm to it from its well crafted levels to the fact that the game doesn’t shy away from its silly premise. The gameplay is also really fun. While you can play the game by yourself, I would not recommend it as you are missing out on what makes the game really enjoyable. It is just really fun trying to work with another player to get past all of the obstacles to win the race or find the hidden objects in the levels. The game is really easy to play but also really satisfying. It is really hard not to have a smile on your face and laugh while playing the game. The controls could maybe use a little tweaking, but there really isn’t much else to complain about.

While it will be some time before the final version of the game is released, I really enjoyed my time with the game. I can’t wait to see what it eventually becomes. If you don’t generally like cooperative games or don’t like the game’s premise, it may not be for you. Those who like the cooperative genre and have at least some interest in the premise though will likely really enjoy Fling to the Finish and should really consider picking it up.