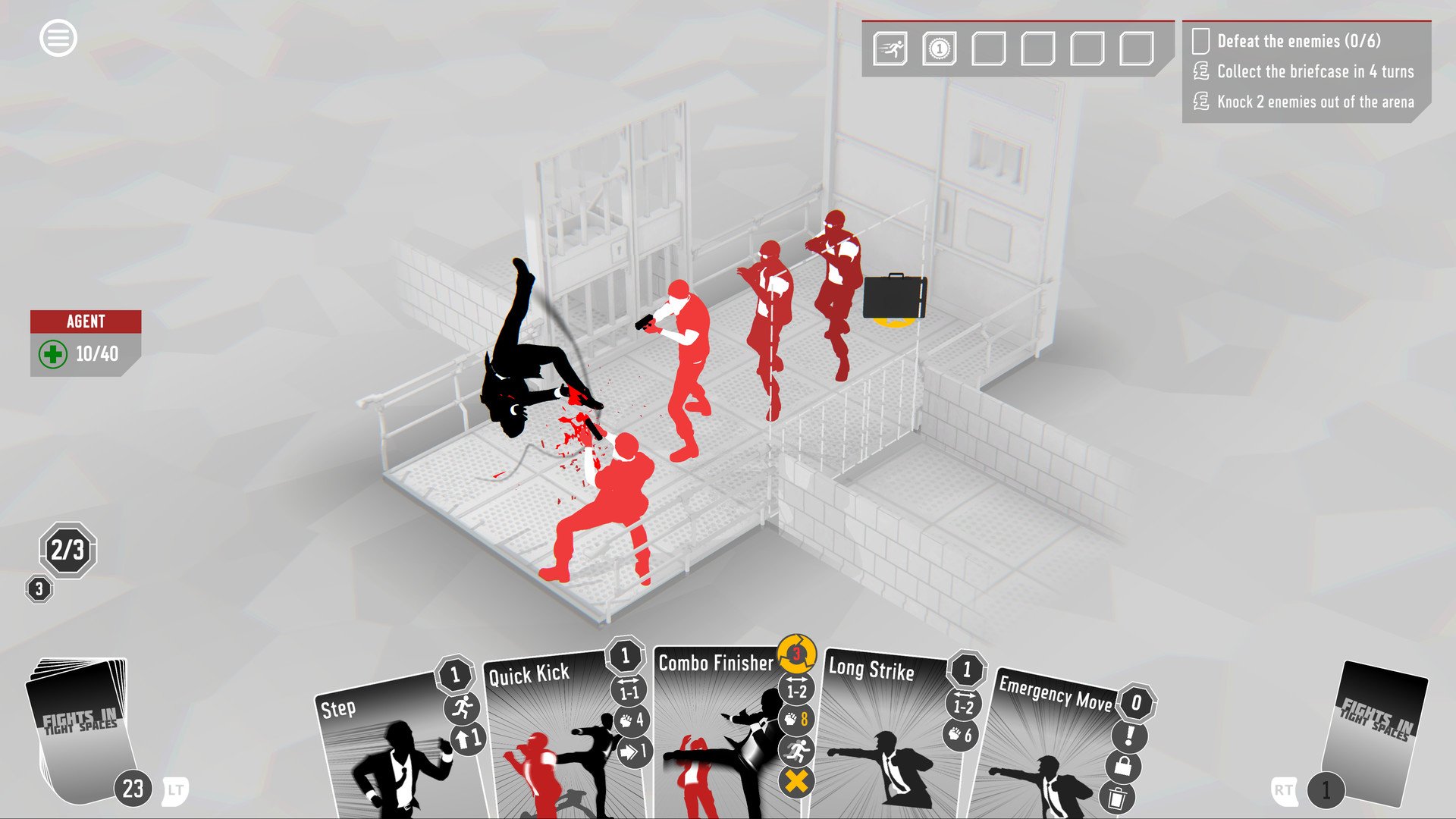 When I first saw Fights in Tight Spaces I knew it was a game that I wanted to check out. As a big fan of both board games and video games, I am always intrigued to try out games that combine both together. The deckbuilder genre has been around for a while in the board game industry and over the last couple of years it has really made a splash in the indie video game scene. While I haven’t played a lot of games in this genre, I really like the premise behind deckbuilding games as you are given the ability to craft your deck to fit the strategy that you want to play. A new deckbuilding video game on its own wouldn’t be super exciting. What really intrigued me about the game though is that it combined deckbuilding mechanics with John Wick inspired action movie fight sequences. Fights in Tight Spaces is a truly innovative take on your typical deckbuilding game by somehow seamlessly combining it with stylish action fight scenes.

The story of Fights in Tight Spaces is pretty straightforward. You work for Section Eleven. While most spy work is now done with electronics, your company would rather stick to the classics. You work as an agent who has to infiltrate various criminal empires and take out any opposition that stands between you and their leader.

Fights in Tight Spaces features a campaign that currently consists of five missions. Each mission consists of around five to ten individual fights as you make your way towards the head of the criminal empire. The gameplay of Fights in Tight Spaces is built around the cards. The game is turn based with you being able to play a certain number of cards and then the enemy units getting to take their turns. For each turn you will be given three momentum points with some cards that can add to this. Every card in the game requires a certain amount of momentum in order to play it (most cards cost one momentum). Cards basically boil down to attack cards, movement cards, and cards that impact the positioning of the enemy units.

The objective of each fight is to eliminate all of the enemies. This can either be done by pushing them out of the stage through designated locations or more likely by depleting their health. While you might want to just pound your enemies with a flurry of attack cards, positioning is just as important in the game. You won’t be able to take out all of the enemies in one turn so you need to position yourself in order to minimize the damage you take from enemy attacks. Positioning is also important because you can actually force enemies into attacking one another.

As you progress through the game you will acquire additional cards to add to your deck. You will be given a choice of which card you want to add. Some deal more damage while others allow you to move around enemies or mess with them in some other way. How you comprise your deck is where much of the game’s strategy comes from. For each card that you add to your deck, the more cards you have to go through before you can reshuffle the cards that you have already played. Therefore you need to craft a deck that gives you all of the cards that you need to succeed without a bunch of cards that get in the way. As you advance in the game you can use currency that you acquire to upgrade the cards in your deck, or you could choose to remove cards from your deck that are just taking up space.

Just watching the trailer for Fights in Tight Spaces had me intrigued. After playing the game though, I think it actually surpassed my high expectations. In a lot of ways the game feels like what you would get if you made a turn based deckbuilder with a theme reminiscent of John Wick. Basically the game simulates hand to hand combat sequences from your favorite action movies. At first glance trying to recreate action movies with a deckbuilder mechanic sounds like an odd combination. It works surprisingly well though. In a way the game kind of feels like a giant puzzle. To begin your turn you are given a set of cards that you can use. You then need to figure out a combination of cards to play that will maximize your damage to enemies while also putting yourself in a position to minimize the damage you take. As a fan of puzzle games I found this to be really satisfying.

I was genuinely surprised by how much strategy the game has as well. The game apparently has around 150 cards currently. While they mostly break down into fight, movement, and enemy manipulation; there is still a lot of variety between the cards in each group. These cards let you craft a strategy that fits your playstyle. If you want to go the more direct path you can load up your deck with cards with high attack and defense values as you wail on the enemy units. Otherwise you could be like me and focus on positioning as you weave around enemies dealing quick blows without the enemy being able to retaliate. You could even come up with a combination of both. At the end of each battle the game allows you to add a card to your deck with all of these cards having their own benefits. You usually will want to add two or more of the cards, but you need to pick the card that works best for your strategy.

Fights in Tight Spaces is generally pretty easy to play as well. There is a slight learning curve as you get used to moving around the environment and how to manipulate the positioning of your own character and the enemies. You should pick up the game pretty quickly though. The game requires planning as you probably should figure out your entire move before playing any cards. Otherwise your character could end up in a bad position. The game helps with this though as it highlights relevant spaces whenever you hover over a card. There is some trial and error to the game though as failure has a cost.

One thing that I haven’t mentioned yet is that Fights in Tight Spaces features some roguelike/rogue-lite mechanics. As I mentioned earlier the game currently features five missions with each mission consisting of around five to ten fights. Each fight is connected as your health carries forward between fights. You will occasionally have the opportunity to heal some of your lost health. When you run out of health your current run will end. Any progress you made in your current mission as well as the deck you assembled will be lost forever. For your next run you can start with any mission that you have unlocked and can chose from one of a couple pre-selected decks that focus on different playstyles.

Generally I am not a big fan of losing huge amounts of progress when I die, but I actually didn’t mind it in Fights in Tight Spaces. In fact I think this was the only way that the game could approach the situation. Most of the individual fights aren’t super difficult on their own. You usually only have to defeat 3-6 enemies which is pretty easy if you plan out your turns. Any damage you take impacts future fights though making the game considerably more difficult. The early fights aren’t that difficult, but each fight takes its toll. At the end of the mission you might not have much health left. This keeps the tension up and forces you to play smart throughout your run.

As for the game’s style I thought Fights in Tight Spaces did a really good job as well. In a way the game’s artstyle actually reminds me a lot of the SUPERHOT series. The game utilizes a style where all of the units on the screen are a different color. This makes it really easy to tell what type of unit each is, and it just looks cool. Each card has its own animation which looks pretty good as your agent pulls off some cool action hero moves. The game does a really good job making you feel like a super spy from your favorite action movies. I did want to point out though that the game is rated M as some of the attacks can get kind of violent including attacks that involve smashing enemies’ heads against a wall.

At this point probably the biggest issue that I had with Fights in Tight Spaces was the fact that the game relies on a decent amount of luck. Honestly there isn’t a whole lot that the game can do about this. You have a lot of control over how much damage you can deal and take on your turn. What you are able to do though always depends on what cards you are dealt. If you are dealt all of your good cards in one turn you won’t be able to use all of them. Even more important is that you need to get some movement or defense cards. If you don’t you basically are stuck with taking a bunch of unavoidable damage. Outside of tweaking how the cards are dealt out, there really isn’t anything that the game could do to prevent this. With the cost of death though, it kind of sucks when you are dealt a bad hand and in turn end up losing a lot of health or even dying.

For those curious about the game’s state in Early Access, I don’t know how much more you could have asked for. Honestly if I didn’t know better I wouldn’t have even known it was an Early Access game. All of the game’s main mechanics are already in place and they are quite polished. The game may need some balancing over time, but you can already really enjoy the gameplay. It could use a little optimization as it did use up more of my computer’s resources than it probably should have. Most of the additions during the Early Access process seem to be based around just adding more content. This includes a daily run mode where players can compete to be on the top of the leaderboard. The game already has quite a bit of content, but I can’t wait to see what else is added. Honestly if nothing else would be added to the game, I would already be satisfied. I can’t wait to see what the game eventually becomes though.

When I first saw Fights in Tight Spaces I was really intrigued as it looked like a really interesting idea. Who thought of creating a deckbuilding game based around simulating hand to hand combat sequences. The concept may be a little unorthodox, but it works really well for the game. The game just entered Early Access, but you wouldn’t know that playing the game. The gameplay is already really polished and is just so satisfying. In a way the gameplay kind of feels like a puzzle as you have to figure out how to play your cards to maximize damage and limit the health you lose. The gameplay honestly feels like you are playing an action movie in slow motion. The game does feature roguelike elements where you have to restart a mission from the beginning when you lose, but it isn’t a big issue for the game. The only somewhat significant issue with the game is just that it relies on a decent amount of luck as the cards that are dealt to you will determine how successful you can be.