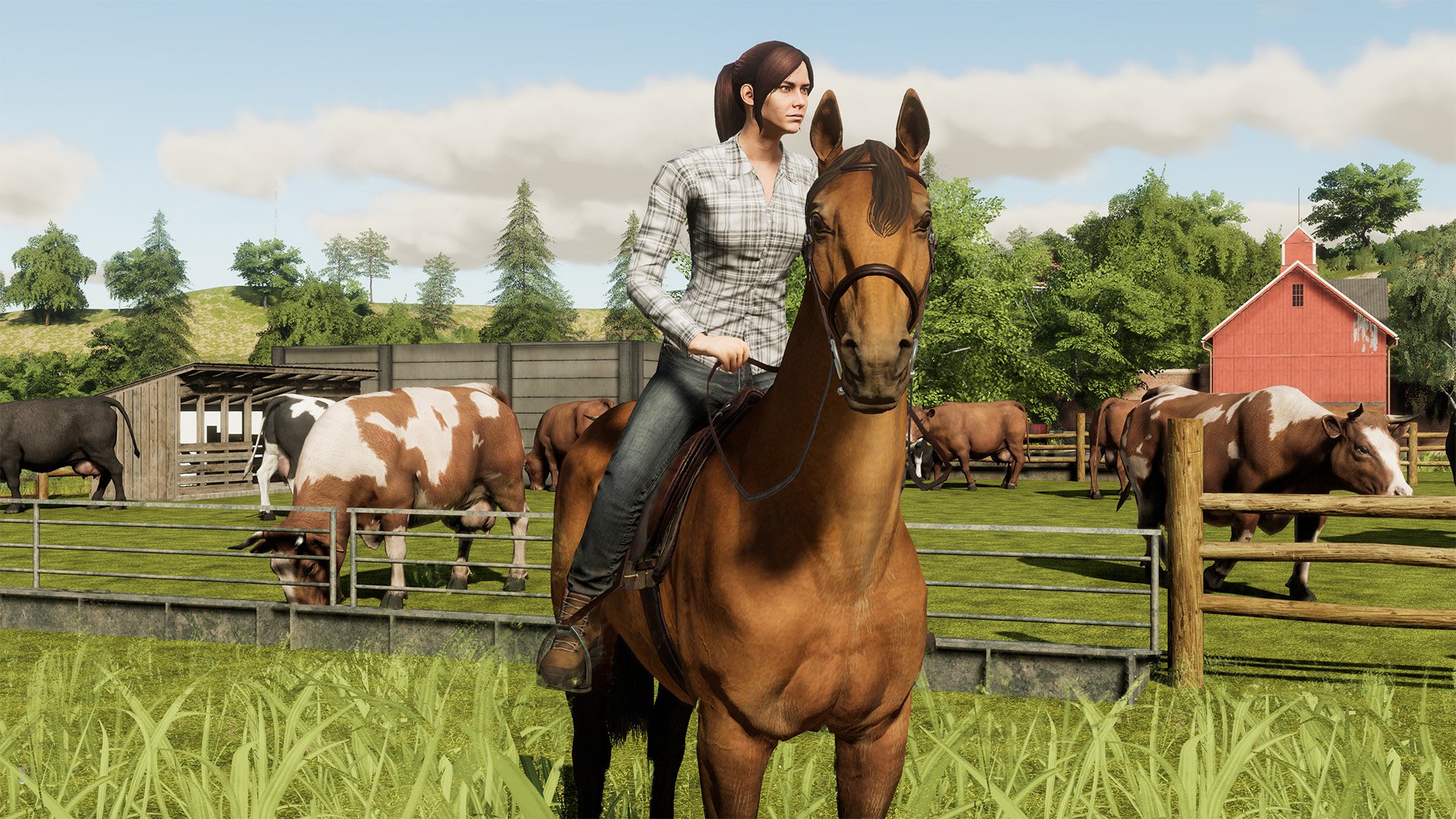 Believe it or not, even though a title like Farming Simulator 19 implies that this is a work or chore simulator, there are plenty of people (like me for example) who enjoy these types of games. There’s something so relaxing and soothing about games like this and the Euro Truck Simulator series. I would never want to be a farmer or a truck driver in real-life, but for some reason they make for nice games to zone out to after a hard day of work. Even though this series has been going since 2008 (with PC and console versions that usually come out every other year and mobile/portable versions filling in the other years), this was actually my first experience with the Farming Simulator series. Based on my enjoyment of simulation games and farming games like Stardew Valley, I thought I would absolutely love it. Unfortunately, my overall reaction to Farming Simulator 19 is a bit more middling than I thought it would be. While it is definitely a relaxing game (and the most realistic farming game on the market), it isn’t nearly as easy to pick up and play as a gem like Stardew Valley.

Farming Simulator 19 is definitely heavy on the “simulator” portion of the game. Every field you own needs to be cultivated, sown (and sometimes fertilized), and harvested and each step takes at least fifteen to thirty minutes to complete (depending on the size of your field). This isn’t one of those games where you can cultivate and plant an entire field in a few minutes. You actually have to work for your money in Farming Simulator 19. While maintaining your fields in a very realistic fashion and driving around heavy machinery are the main mechanics of the game, you can also do jobs for other farmers (in exchange for cash), raise animals like cows and chickens, or even get into the logging profession.

Most of you reading this review probably already know how the game works and only really care about the additions included in Farming Simulator 19. Again, I have no experience with the franchise so I have no idea how vastly the game has changed (and due to that I might not be super helpful in this area). In terms of new additions though, Farming Simulator 19 adds John Deere tractors and machinery for the first time (along with brands like Case IH, New Holland, Challenger, Fendt, and many other lesser known companies). One of the biggest features the game is promoting is a complete overhaul of the graphics engine. I can’t tell you how significant the graphics have improved but I can tell you that the game looks great. Horses (which you can ride to train) have also been added to the game as well as two new crops (cotton and oat). Unfortunately, I wasn’t able to progress to the stage where I could own horses so I can’t really tell you how they change the game.

The Farming Simulator series is certainly not for everyone. If you are more interested in a casual farming experience, play Stardew Valley or a game like that. Farming Simulator 19 doesn’t hold your hand and makes you work hard for your progress. You can make a ton of progress in an hour in a game like Stardew Valley, in Farming Simulator that same hour might allow you to get two fields ready if you’re lucky. For some people, this will be a positive while for others, it’s a complete deal-breaker. I would say I’m kind of in the middle. While I think I prefer games like Stardew Valley that let you make more progress, to be honest the fact that you need to plow a field for 15-30 minutes in this game almost makes it even more relaxing than one of the kings of relaxing games. In Stardew Valley, you are running around trying to complete as many tasks in a day as you can. In Farming Simulator 19, you are forced to do the same thing for a large period of time, meaning the game plays at a much slower pace. If you get sick of the repetitive tasks, you can hire farmhands to plow or harvest your fields for you but that would turn the game into a pretty simple management game (and they can’t help with animal care or logging). I would say this game is absolutely not for casuals who just want a simple farming game to play. However, if you want an in-depth simulation of farming or have always wanted to drive big machinery, this is absolutely your kind of game. While I haven’t driven any heavy machinery myself, it feels very realistic at least to me.

One thing I do wish Farming Simulator 19 would do a better job of is helping new players. This definitely isn’t one of those games that hold your hand and show you how to do everything. The tutorial takes about five minutes to complete and only gives you the absolute basics (just how to cultivate, sow, and harvest). These tutorials are pretty good at explaining the mechanics in a simple way for new players. However, after those first few tutorials, the help just flat out stops. I wish the tutorials would come back when you first try something new (i.e. when you start logging or trying to complete your first mission). I personally wasted about an hour trying to complete my first mission. I originally went to the wrong dot on the map and tried everything to get the stuff I was supposed to be transporting. I probably spent 15 minutes looking everywhere for it before realizing that I needed to go to the yellow dot instead. Once there (after probably at least 20 minutes of driving), I again struggled to find the stuff and ultimately realized I needed a piece of equipment I didn’t have in order to lift it. I sadly drove back home having wasted an hour of my life on no progress whatsoever. I will flat out admit that some of this is my fault but the game could at least let you know when you need a new piece of equipment to do the job. I definitely feel like the lack of tutorials hurt my enjoyment of the game a bit.

While all of this might sound like I had a negative reaction to my time with Farming Simulator 19, that’s actually not the case. It absolutely does what it says on the tin and is definitely the most realistic farming simulator out there. I enjoyed playing the game, I just thought I would like it more than I actually did. Clearly, I prefer the more casual farming games than in-depth ones (though I will certainly pick this game up again from time to time). Is Farming Simulator 19 worth a purchase? I would say there are three different audiences for this game. First of all, you have fans of Stardew Valley and other casual farming games looking for a more in-depth experience. For that audience, this is a much different game that I’m not sure if you will enjoy or not. Some of you will enjoy the increase in realism and difficulty but others might be frustrating by how little progress you make in a day. The second potential audience for this game is fans of the simulation genre who have never played the Farming Simulator series before. For this audience, as long as you are interested in farming or driving heavy machinery, I would absolutely recommend Farming Simulator 19. It is the premiere farming simulator game out there and you could easily find yourself with a hundred hours in the game. There are plenty of things to do and this series has always been a favorite for modders, meaning there is plenty more content available to play once you get bored of the base game.

Finally, the last audience is those who already enjoy the Farming Simulator series and just want to know if this new release is worth upgrading to. Unfortunately, I’m not really qualified to give an answer here as other than the things the game notes are new, I have no idea on additions and especially improvements the game has made. I have no idea how much better the graphics are or how much better the game plays. The big additions are the graphics overhaul, John Deere equipment (along with other brands), horses, cotton, and oat. To be honest, outside of the graphics overhaul that doesn’t seem like a lot of new additions. For those of you who have the previous release in this series, the decision on whether to upgrade or not probably depends on how much you value those new additions.

Overall, I would recommend Farming Simulator 19 for simulator genre fans and it might be worth an upgrade from the previous game if you really enjoy the series. However, I will say that this game is definitely not for everyone and has a pretty small niche.