I really miss the “blue sky” TV series of the mid-’00s. I’m sure a lot of you reading this are wondering what in the heck a “blue sky” show is and why I miss them so much. For those who don’t know, a blue sky show is a somewhat common term in the television business for the type of series USA Network popularized a decade and a half or so ago during their “characters welcome” marketing campaign days. These shows include Monk, Psych, Burn Notice, White Collar, and Royal Pains. While the blue sky moniker is technically usually only used to refer to those USA Network series, I do think there are a lot of very similar ones on channels like TNT and Syfy that fit the bill as well. Other titles I would consider to be part of this sub-genre include Leverage and Warehouse 13 (which Eureka actually shares a universe due to multiple crossovers between the two shows).

Basically, the shows in this genre are usually light, comedic dramas with great characters and potentially some small serialized elements (though most of each episode is generally procedural in nature). One of the few shows in this genre I hadn’t yet seen until I got the complete series on Blu-ray was Eureka. As much as I love today’s serialized prestige shows (and how addicting they can be), I do miss the “olden days” of simple and fun series like this. After watching Eureka, I would say it is a middle-tier series on this list. It’s not as amazing as something like Monk, Psych, or Burn Notice but on par with the likes of Leverage and Warehouse 13. Still, if you haven’t seen it and miss this type of show as much as I do, it’s almost certainly worth checking it out.

Eureka ran for five seasons and 77 episodes and almost certainly has been Sci-Fi Channel/Syfy’s biggest hit since Battlestar Galactica (with Warehouse 13 likely being second on that list), not that that’s saying much with the troubles they’ve had launching new shows over the last decade and a half. The series takes place in the small town of Eureka, Oregon that is chock full of scientific geniuses and the best minds in the country. Most of the town works for Global Dynamics, a cutting-edge research facility where nearly all of the recent scientific breakthroughs have originated at. The main character is a former U.S. Marshall named Jack Carter (Colin Ferguson) who gets a “promotion” to become the town’s sheriff (after he gets stranded in Eureka but saves the day). With a town like this, there’s always trouble on the horizon between technology run amok, citizens gaining “superpowers,” and mysterious illnesses affecting everybody, meaning his work is never finished and always bizarre. There’s also Jack’s main rival Nathan Stark (one of the main scientists/businessmen at Global Dynamics), Allison Blake (who is the liaison between the government and Global Dynamics), Henry Deacon (the ultimate “Renaissance Man” and jack of all trades who works as the town’s mechanic, medical examiner, and more), and everybody’s favorite lovable geek Fargo (Neil Grayston). Episodes are mainly procedural in nature but there are also season-long story arcs for those who want some serialized storytelling (though not all of these are what I would call major storylines). While Eureka is technically labeled as a science fiction drama, it’s every bit as much a comedy as a drama.

Eureka has all the hallmarks of a good “blue sky” show between its lovable characters, light and easily digestible stories, focus on comedy, and a serialized-but-mostly-procedural brand of storytelling. I wouldn’t say it’s as funny as Monk or Psych, has as great of characters as Sam Axe or the rest of the crew on Burn Notice (or Shawn and Gus from Psych for that matter), or provides as interesting of stories as Leverage but all of those ingredients are still satisfactory to good. I do think that the characters and comedy in Eureka are better than the storytelling though. The stories are fine but not quite as interesting as I had hoped, they’re mostly pretty standard science fiction fare that’s been done a hundred times like a malevolent A.I. trapping the main characters, a drug giving scientists super speed, or someone changing the past to save someone they loved. There’s not a lot of unique storytelling here but it’s not like the stories are bad either.

One of the coolest things about Eureka: The Complete Series is that it takes place in a small town where you really get to know the residents. As someone who has lived their entire life in a small town of around 5,000 people, it’s refreshing to see a show that doesn’t take place in Los Angeles, New York City, or any of the other major cities that 90-95% of American shows are located. And Eureka actually feels like a small town that’s almost a character in itself. As I wrote earlier, I personally think the characters and the comedy they provide are this show’s strongest selling point. From Colin Ferguson’s lovable Sheriff Carter to do-it-all Henry and of course Fargo, there’s a lot of really likable and funny characters in this series. Even characters with smaller roles like Taggart or cafe owner Vincent are usually good for a laugh or two when they appear.

Like most “blue sky” shows, Eureka is a very consistently above average show. That’s great if you want some comfort food and just want a show that will make you laugh a bit. However, it also means that it rarely hits the highs that more serialized and prestige shows do. I don’t believe I would give a single episode lower than a 3/5 if I had to rate them all, but the show is also rarely worthy of more than a 3.5/5. It’s very similar to Monk, Psych, Leverage, etc. in this aspect. Those are the kinds of shows that I turn to when I don’t want to really think too much and instead just want some nice, consistent, uncomplicated humor and stories and Eureka fits into that category very well. While I may watch addicting, more heavily serialized shows like Mr. Robot or 12 Monkeys more often, it’s always nice to have some nice comfort food to cleanse the palette. I will say that like a lot of shows, Eureka does take awhile to get going. It starts off very mediocre but towards the end of the first season, it turns a corner and mostly stays in the above average category for the rest of its run.

From a video quality standpoint, I wouldn’t exactly say Eureka: The Complete Series is an amazing looking show on Blu-ray. In its defense though, it is a somewhat aging basic cable show which relied on a lot of lower budget special effects. Still, while I’m not an expert videophile (I’m far from one actually), I don’t think the show looks horrible on the format or anything like that. I do have some of the DVD releases for this show which I used to compare with the episodes on this Blu-ray release and there’s of course a noticeable upgrade. Maybe not a huge one, but I wasn’t exactly expecting a show like this to look amazing in the first place. Just don’t expect some crystal clear, gorgeous viewing experience (which you shouldn’t anyway considering the things working against it), expect a more budget-conscience release with a slight video quality upgrade. 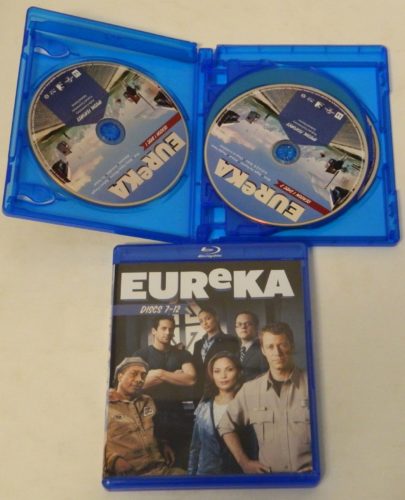 The packaging for Eureka: The Complete Series on Blu-ray.

Eureka: The Complete Series is absolutely loaded with bonus features including commentaries, webisodes, deleted scenes, gag reels, behind-the-scenes featurettes, and more. Most if not all of the extras from the individual season DVD releases have been included but none have been up-scaled to high-definition. Mill Creek’s packaging problem for complete series sets is long in the past and similar to most of their recent releases, Eureka: The Complete Series features two plastic Blu-ray cases housed in a cardboard outer box. Discs each get their own tray and while basic, the packaging does its job.

While Eureka will never be regarded as a classic like the more high-concept, heavily serialized shows of today and the recent past, it’s still a very good show for those who want something simple that will make them laugh. While I didn’t enjoy it as much as Monk, Psych, or Burn Notice, it’s nearly on par (and very similar) to those classic USA Network series. The stories being told aren’t the best (they usually tend to be mediocre to slightly above average) but the characters and comedy make up for it. I would definitely recommend most science fiction and “blue sky” series fans to check Eureka out. However, if you already have the DVD releases and aren’t a huge stickler for video quality, it may not be worth the upgrade to Blu-ray. While there is definitely a bit of an improvement visually, it isn’t so major that Eureka: The Complete Series is worthy of a blanket recommendation to upgrade to this Blu-ray release. If you don’t have the DVD set releases, love the show, or crave any slight upgrade in video quality you can get, I would probably recommend upgrading. Otherwise, you can probably stick with your DVD releases.

Eureka: The Complete Series was released on Blu-ray on August 11, 2020.