Originally created back in 1979, ESPN is one of the world leaders in sports coverage. It is not that surprising that when someone wanted to make a sports themed Jeopardy! board game that they decided to use the ESPN name. Being a fan of sports and not minding the occasional trivia game, I was interested in seeing how well ESPN Jeopardy! would turn out. ESPN Jeopardy! is basically what you would expect as it is a very generic trivia game that is going to be difficult for everyone but sports experts.

How to Play ESPN Jeopardy! 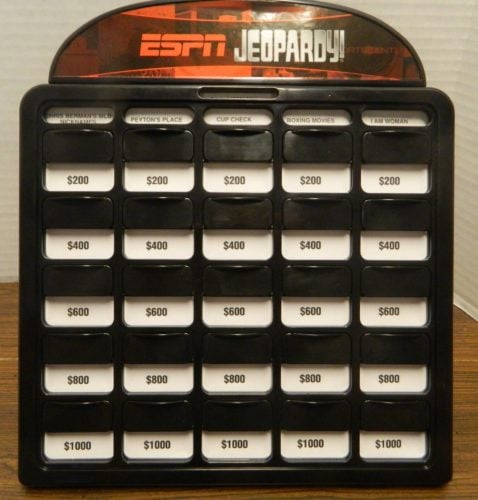 The current player gets to choose a category and a dollar value that hasn’t yet been selected. The emcee slides down the corresponding window and reads the answer out loud. When a player thinks they know the question that corresponds to the answer they press their button. The player who presses their button first gets to submit their question (all answers must be in the form of a question). The emcee looks up the question/answer in the booklet to see if the player is correct. 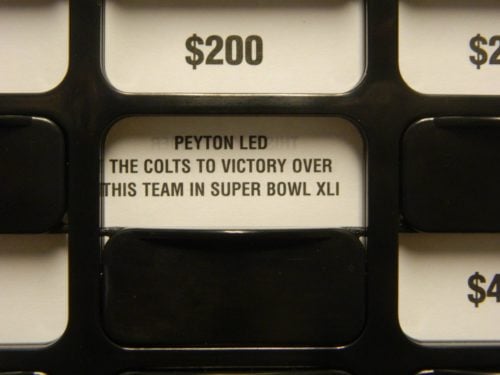 This $400 question has players trying to figure out which team the Colts beat in Super Bowl XLI. The first player to provide the correct response receives $400 from the bank.

If the player is correct, they receive money from the bank equal to the value of the question asked. They will also get to choose the next category/value.

If the player is wrong, they lose the corresponding amount of money. A player can never have negative money. Another player can now ring in and try to provide the right question. Players can keep trying to guess the correct answer until someone is correct. No player can make more than one guess though. If no one gives the correct question, the player who picked last, will pick the next category and dollar amount.

When a player selects a daily double, they will play it by themselves. The player can bet as much money as they want up to the amount of money they currently have. If the player has less than $1,000; they can bet up to $1,000. In the second round players who have less than $2,000 can bet up to $2,000. The emcee reads the answer out loud. If the player can come up with the right question, they will receive the amount they bet from the bank. If they are wrong they lose the amount they bet to the bank. 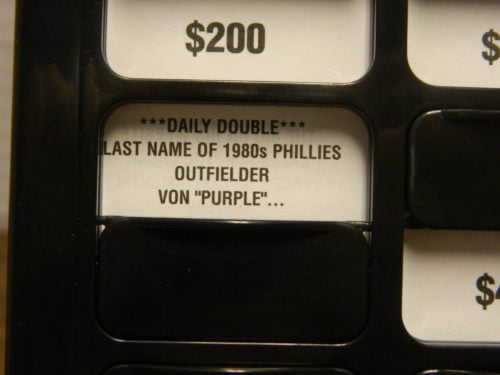 Once all 25 questions have been played from the first round, the gamesheet is flipped to the other side. All of the windows are pushed to the up position. One of the $2,000 answers is marked Final Jeopardy! which will be the last question asked in the round. The player who is in last will get to choose the first category and dollar amount for this round.

When all but the last question have been asked in the second round, Final Jeopardy begins. 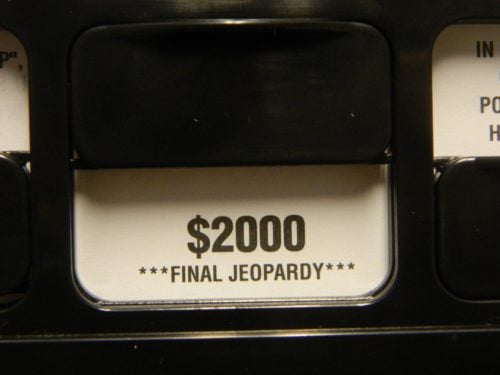 All of the other questions have been asked so the final Jeopardy round begins.

Each player counts up how much money they have. The player with the most money wins the game.

My Thoughts on ESPN Jeopardy!

Honestly there isn’t a whole lot for me to say about ESPN Jeopardy! as it is basically exactly what you would expect. Its a sports themed Jeopardy!. Like the gameshow players are given answers and have to produce the questions for those answers in order to earn money. Basically if you have ever seen Jeopardy! before you already know what to expect out of ESPN Jeopardy!. The only difference is that all of the questions are sports related. ESPN Jeopardy! is pretty much the most generic sports trivia game that you will ever find.

So is ESPN Jeopardy! good? That is probably going to depend on how much you love sports and your opinion of trivia games. You can’t just be a fan of one sport either as you basically have to be knowledgeable in all sports in order to do well in the game. I would personally call myself a sports fan and I did terrible in the game. That is probably partially due to being mostly a football fan who somewhat pays attention to other sports. Unless you really know all of the major sports and even some of the more niche sports, you are going to have troubles with the game. If you are a sports fan that knows a lot about a lot of sports though you will probably do quite well in the game. If this describes you I could see you enjoying the game quite a bit.

Even though the game was only created back in 2008, it is already showing signs of being outdated. Most of the questions in the game seem to be gauged towards that time period. If you are a big fan of sports you will probably still know a lot of the answers. People who aren’t as big of sports fans though are going to have trouble remembering specific details from over a decade ago.

Other than the trivia questions being pretty hard for all but the most obsessive sports fans, the game has some issues with its execution of the gameplay itself.

First I don’t like the idea of forcing one of the players to be the emcee. When playing a game who wants to just be the host who reads questions and hands out money? You either need to get a volunteer that doesn’t mind wasting their time or someone is going to be forced to not play the game. I really think the game could have found some way of letting all of the players have a chance of playing the game at the same time. They could have let everyone read the clue themselves and then had whoever guessed look up whether they got the right answer. This would have been somewhat of a hassle but it would have let everyone actually play the game. With some adjustment to the components it might not have even been that big of a hassle.

I also don’t really understand why the game thought it was a good idea to use paper money. The problem with paper money is that each time a player gets a correct answer they need to take the corresponding money from the bank. Each time they get an answer incorrect, they then have to give money back to the bank. Having to count up how much money the players have at different points in the game also becomes a hassle. A much easier way of keeping track of the money would have been to use an erasable board and changed each player’s total when they earned/lost money.

On the topic of components, they are pretty basic for the most part. The timer is nothing special but it works well and gives a clear indication of who buzzed in first. Otherwise the components are far from remarkable. The gameboard is decent and the rest of the components serve their purpose. The biggest problem with the components is that there are only twenty game sheets. Therefore you can only play the game twenty times before you are going to have to repeat one of the games. I don’t see a lot of people playing more than twenty games of ESPN Jeopardy! but it would have been nice if you were given that opportunity.

Should You Buy ESPN Jeopardy!?

Basically ESPN Jeopardy! is what you would expect it to be. It is a very generic sports trivia game. It doesn’t add any new mechanics and is basically the same as the TV gameshow except that all of the questions involve sports. The biggest problem that I had with the game is that you basically need to be a sports expert in order to do well in the game. You need to know a lot about many different sports. Being a casual fan is not going to cut it as you won’t do well in the game. If one player is considerably more knowledgeable about sports they are going to destroy the other players. In addition to the questions being kind of specific, they are kind of outdated as well. Other problems include forcing one of the players to be the emcee and having to use paper money to keep track of the players’ scores.

If you would like to purchase ESPN Jeopardy! you can find it online: Amazon