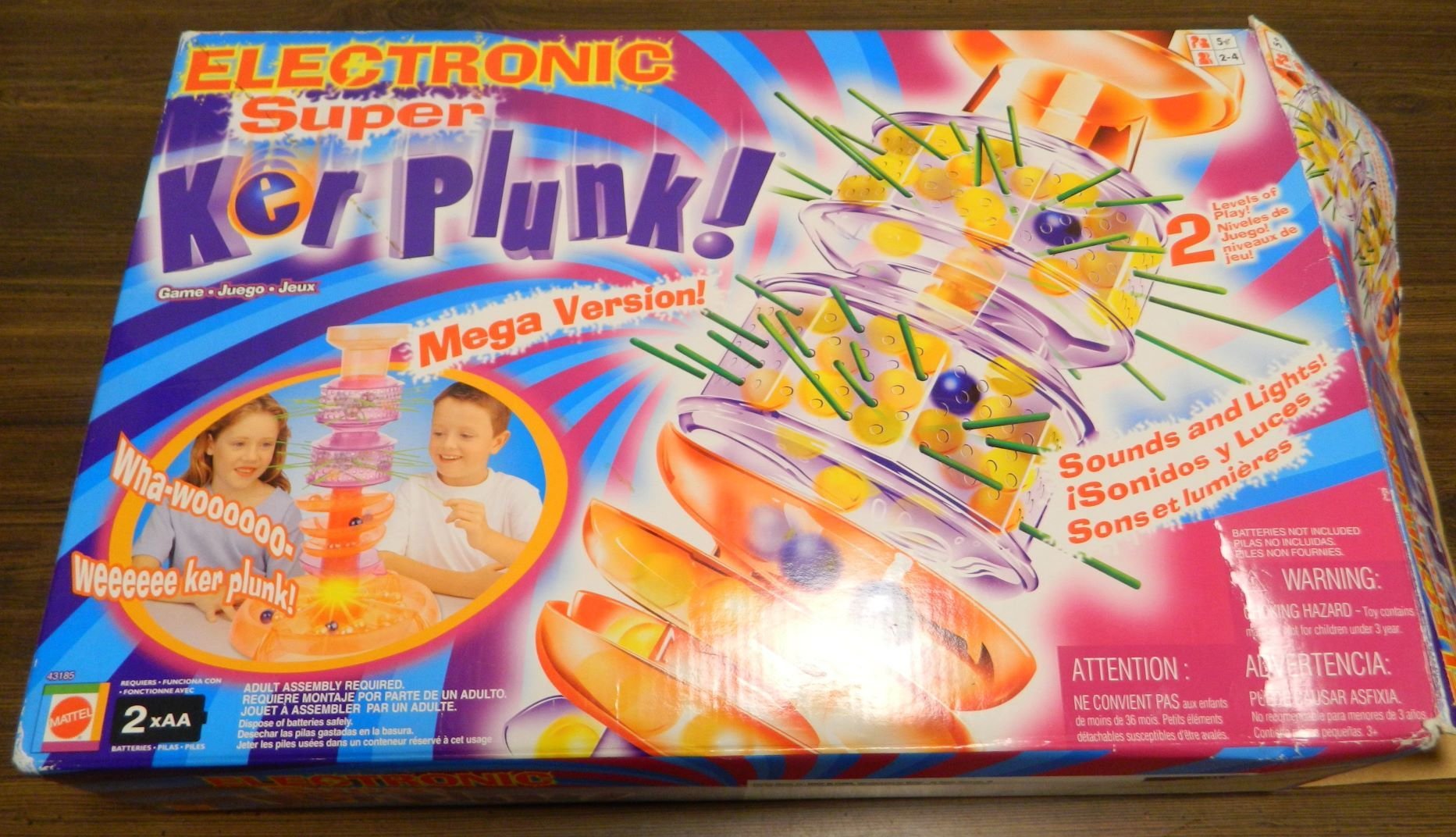 Originally released back in 1967 Ker Plunk! is one of those games that is generally considered to be a borderline classic board game. It may not be as well known as some games, but it is one of those games that many people have fond memories of from their childhood. I remember playing the game as a child and enjoying it quite a bit. I really haven’t played the game for many years though as it is one of those games that I thought was mostly just for younger children. Due to its popularity Ker Plunk! has been released many times since its original release. Most of these versions are pretty much the same with slightly different components. In 2002 though Mattel actually released a new version that differs from the original game in more than just the components. That is the game I am looking at today Electronic Super Ker Plunk!. I didn’t really know what to expect from it as electronic components rarely add anything worthwhile to classic games as they are usually more of a gimmick than anything else. Electronic Super Ker Plunk! is slightly better than the original Ker Plunk! as it slightly tweaks the gameplay, but it fails to fix the problems with the original game which mostly involve the heavy reliance on luck. To begin each player’s turn you will turn the dispenser at the bottom of the tower so it points towards your numbered compartment.

After the player reinserts the stick they will take a second stick from the upper level. They will keep this stick in front of them.

Any marbles that fall through the tower will go to the current player. After the player has pulled out both sticks play will pass to the next player clockwise.

After all of the sticks have been pulled from the upper level players will draw both of their sticks from the lower level.

If a blue marble falls into your tray during your turn, you will finish your current turn. You will then take another turn. You will turn the dispenser to the player of your choice and take out two sticks like normal. As another player will take the marbles that you knock down you should pull out sticks that will knock down as many marbles as possible.

A player will do this for each blue marble that falls into their tray. After a player has finished these bonus turns, play will resume with the player to the left of the player who took the last turn.

For the most part Electronic Super Ker Plunk! is pretty much exactly the same as the original Ker Plunk!. Players take turns removing sticks and hoping that they didn’t take one of the sticks that are holding up the marbles. The player who makes the least marbles drop during the game will win. As the two games are basically the same, outside of a few slight tweaks which I will discuss shortly, if you already have an opinion of Ker Plunk! it should be the same for Electronic Super Ker Plunk! as well.

Basically Electronic Super Ker Plunk! is a game made for younger children just like the original game. The game is really simple to play as you just take turns removing sticks hoping to not take one that is holding up the marbles. This means that the game can be taught in just a minute or two. With only one mechanic the game can also be played by pretty much anyone. Anyone old enough to count up the marbles at the end of the game should have no trouble playing the game. Younger children may not make great choices for what sticks they should pull out, but they should have no trouble understanding how to play the game. That is a good thing because the game was mostly designed for younger children. I know I enjoyed the original game when I was young. Therefore I think most younger children will like seeing the marbles fall down the tower and should enjoy the game quite a bit.

The problem is that it becomes boring really quickly for adults. I think this comes from the fact that the game relies almost entirely on luck. Basically the only strategy/skill in the game comes from deciding which sticks you want to pull out. You want to pull out a stick that won’t disturb the marbles so they don’t fall during your turn. Usually it is pretty obvious which sticks you should pull as no marbles rest on the stick. You could decide to make a riskier pull though in order to make it harder for the next player(s). That is basically all there is to the game though. The few decisions you get to make in the game are really obvious. This won’t bother younger children, but it does lead to a pretty dull game for adults.

This issue is compounded by the game relying on a lot of luck. If you pull the wrong stick you can get stuck with a lot of marbles due to your own mistake. There will be times though when you pull a stick that appears to not have any marbles that are depending on just to have it set off an avalanche. Then there are the times where there are no good sticks to pull. This is where turn order can play a big role in the game as the first player that has to pull a key stick is likely going to lose. The problem is that rarely do you only get one or two marbles. You will usually pull out a stick and at least half of the marbles will fall through. There is usually one or two players with only a couple marbles while the other players are stuck with a ton. Thus pulling the wrong stick is likely going to eliminate you from the game. This reliance on luck makes it feel like you don’t really have much impact on your fate in the game.

So lets get to how Electronic Super Ker Plunk! differs from the original game. There are basically three differences between the games. Lets begin with the “electronic” aspect of the game. Basically the game has a small piece that is added to the game unit. At the top of this unit is a button/lever which is activated whenever a marble falls through the sticks. When activated it starts playing sound effects and displays some flashing lights. That is all it does. I didn’t expect much from the electronic part and yet I was still left disappointed. The electronic components just adds some bells and whistles to the game and that is it. It does nothing to actually impact the gameplay so it was just a gimmick to try and get people to pick up this version over other versions of the game. I could see the electronic components appealing to younger children, but they don’t really do anything to appeal to adults.

I would say that the biggest difference between Electronic Super Ker Plunk! and the original game is the actual design of the tower. In the original Ker Plunk! there is only one area where you place the sticks. In Electronic Super Ker Plunk! there is an upper and lower level. As you take sticks from the upper level you add some of them to the lower level which creates a barrier for when marbles fall through the top layer. This doesn’t drastically change the gameplay, but I think it is an improvement over the original game. I like the second layer as it gives players a second chance if they make a bad choice in which stick they take from the top level. It also adds a little more strategy to the game as when you add the sticks to the lower level you can decide to either make a strong lower level that will protect against falling marbles or create one with obvious holes hoping one of the other players is the first to make marbles fall from the top level. The one thing I don’t like about the second level is that I think the game should have dropped the requirement to pick two sticks once all of the sticks have been removed from the top level. I don’t like this rule as it makes it more likely that you will get stuck with a lot of marbles on one of your turns. Nonetheless this small addition of the second level is honestly the main reason I prefer Electronic Super Ker Plunk! over the original game.

The final difference between the two games is the addition of the blue marbles. Some other versions of the game may have these unique marbles, but I thought they were an interesting addition to the game. Basically it is both a positive and a negative to get a blue marble. On the negative side they will count as a marble when scoring at the end of the game. On the positive side though they allow you to enact revenge on the other players. Basically you can use the marble to target one of the other players with the least marbles. You then try to pull out the sticks that are supporting the most marbles to hopefully give a bunch of marbles to one of your competitors. This doesn’t add a lot to the game other than more luck, but I don’t mind the mechanic. It does a good job adding some variety to the game and actually gives players a way to target the player that is in first place.

As for the components I would say that they are basically what you would expect them to be. The components (outside of the marbles) are made of plastic, but they are durable enough that they should last as long as they are taken care of. While I question the point of the electronic components I actually think they work pretty well. I will say that this version of the game has quite a bit of setup though. It is pretty easy to assemble the tower but it takes some time. The worst part of the setup is inserting all of the sticks into the tower. The last few sticks are always hard to insert as it is hard to find a hole on the other side that you can slip the stick through. I honestly think the setup takes around the same amount of time as the actual gameplay. This is never a good sign for a game.

For the most part Electronic Super Ker Plunk! is basically the same as the original game. Players take turns removing sticks hoping to not take the one stick that makes the marbles fall. That is basically all there is to the game. With the game’s simplicity I could see it appealing to younger children as I know I enjoyed the original game when I was a kid. Removing the sticks and watching the marbles fall can be somewhat fun for a short time, but it becomes repetitive pretty quickly especially for adults. The problem is that there are few decisions to make in the game and they are usually pretty obvious. This leads to the game relying mostly on luck. Electronic Super Ker Plunk! only really differs from the original game in three small ways. First there is the electronic component that only adds sounds and lights to the game while not impacting the gameplay at all. The game also adds blue marbles which adds some variety as you can get some revenge on the other players. The biggest change is adding another layer to the tower which doesn’t drastically change the gameplay but is a nice addition to the original game.