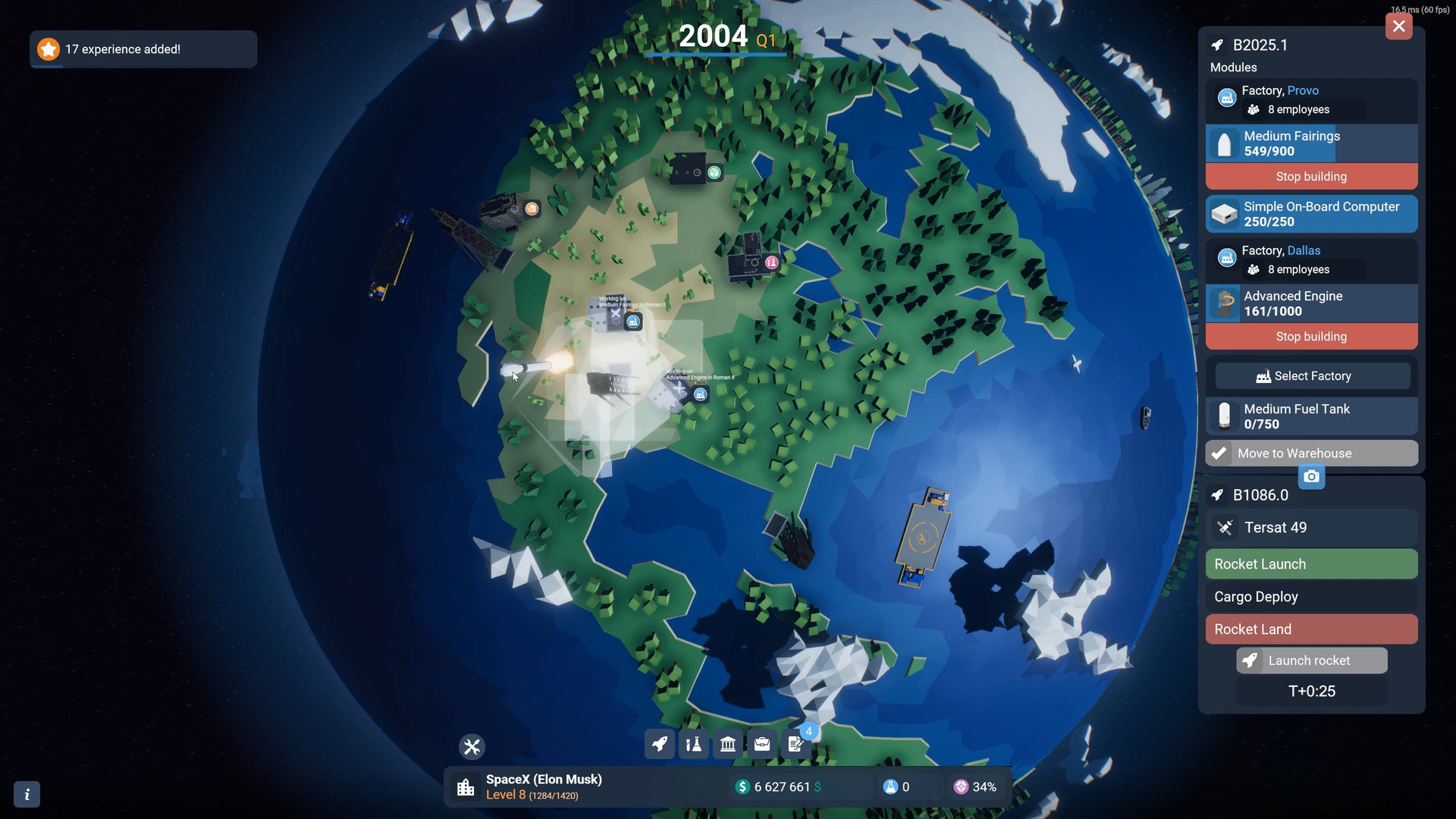 Ever since the Space Race began, a lot of people have had an interest in exploring space. For a long time only governments had the expertise and money to produce a space program. In recent years though the private spaceflight industry has been growing rapidly which includes companies like SpaceX. EarthX lets you become one of these companies as you create and run you own private spaceflight company. EarthX is a fun and interesting look at running your own spaceflight company that has a great foundation in place which could use a little more content.

Each game of EarthX begins in 2002. You are the head of a new small startup space company. You are given a few million dollars and are tasked with creating a company that can successfully launch rockets into space. As your company is just starting out you begin with nothing except for an office. You are in charge of everything from hiring employees; building factories, laboratories, offices, and warehouses; researching new rocket parts; and even finding the contracts needed to keep your company in business.

Your quest to build a spaceflight company begins with research. In order to build any rockets you need to have the necessary technology in place. At the beginning of the game you are given enough research points to research all of the tech needed to build your first rocket. To build more advanced rockets though you need to put time and money into researching new components. This requires you to build laboratories and staff them with employees. This will generate research points based on how many laboratories and researchers you are using. You can then spend these points along with money to research new components.

Next comes actually building the rockets. To build a rocket you first need to create a type of rocket. This involves choosing which components you are going to use in the rocket. Once you have designed a rocket type you can move onto actually building it. To build a rocket you need to manufacture all of the parts that make up the rocket that you have chosen to build. To build components you need to create factories and staff them with employees. You will then choose which factory will build each component. The components are then built over time depending on how many employees work at the factory. When a rocket is completed you will send it to one of your warehouses. At the warehouse you will get to see the rocket’s build quality and durability. The first rockets you build of each type will have a lower build quality, but the more you build of a given rocket type the better the build quality will be.

After you have built a rocket it is time to move on to getting paid. You begin by launching some rockets into space in order to prove to companies that you can actually do it. After that though you can start taking contracts in order to start making money. Using your offices you can start finding new contracts to take. Each contract requires you to build a rocket that can carry a certain payload to a certain part of the atmosphere. The contracts also have a time limit in which you need to complete the contract. Once you take a contract you must complete it before the deadline or you will face a penalty.

So it is finally time to actually launch your rockets and hopefully get paid. You begin by choosing the contract that you would like to complete. This will lead you to choosing one of your completed rockets and a launch pad. With the press of a button your rocket is then launched. You will then have to sit back and watch to see if your rocket is successful or if it will blow up. If your rocket successfully delivers the payload you will receive the reward for completing the contract. If the rocket blows up, you will have to pay damages for the cargo that you destroyed.

Being a fan of simulation and business strategy games, I was intrigued by EarthX. The concept of running a commercial spaceflight company was an interesting theme for this type of strategy game. I can’t say I ever really thought about running a commercial spaceflight company though. Even though I find space interesting it isn’t one of the topics that I am most interested in. Despite this I enjoyed my time with EarthX quite a bit.

I think the reason that I enjoyed EarthX is that it has a good framework in place. The basic gameplay is pretty simple but it works. The gameplay loop of researching new technologies, building rockets, finding contracts, and launching rockets is satisfying. While I think the gameplay loop could be further developed (more on this later), EarthX’s core gameplay is fun and well developed which is what is needed for this stage of early access. I had fun playing the game as it is enoyable trying to expand your business while praying that your rockets won’t blow up. People who like business strategy games and are particularly interested in commercial spaceflight should enjoy their time with EarthX quite a bit even in these early stages.

I would say that the one area where EarthX needs the most work is content. All of the basic mechanics are currently in place and they work well for the most part. Unfortunately there isn’t a lot to do in the gameplay loop at this time. This leads you to doing the same things over and over again. After a while this can get a little repetitive. I think the gameplay loop is good, but some of the mechanics could benefit from being expanded. For example the game could maybe go into more depth when testing your rockets and rocket parts. There could also be more steps to actually building the different rocket parts which could include having to acquire materials. Reading through the plans for the early access process, this seems to be the one area that will be focused on most. If these elements of the game are further developed I can see EarthX becoming a great game.

The other problem that I had with EarthX is that it is hard to get a good estimate of how likely your rocket will be successful. The game has a couple stats that should help you determine the odds that your rocket will explode. First there is the build quality of your rockets. This is improved by building more rockets of the same type. This makes sense as the more times you build a rocket the better it should be done. Higher build quality and durability should improve the odds that your rocket works. Before you launch rockets you are also given a percentage that appears to show how likely your rocket is to succeed.

Despite using these percentages to build the best rocket that I could build, rockets still seemed to randomly blow up. I had rockets that had a 90% chance of success that would still blow up. If this was uncommon occurrence it would make sense as there was a 10% chance that the rocket would blow up. I experienced a much higher percentage of these rockets blowing up though. Either I was getting really unlucky or I didn’t fully understand the odds of a successful launch.

EarthX needs a better system to explain to players the odds of success and failure. I don’t mind that the game has some random explosions as it brings some excitement to the game as you anxiously wait to see if your rocket is a success. The game needs a better way to mitigate risk though. Having one of your rockets blow up while trying to complete a contract can be a huge hit to your business. You lose both the cost of the rocket as well as the penalty for destroying the cargo. If you have a couple of these failures around the same time your company can quickly go bankrupt. For this reason I think the game should have some way for you to manage your risk. I don’t think the game should let you eliminate all of the risk, but you should be able to minimize it by either paying more money or taking more time to build and test the rocket before launching it.

While still in the early stages of early access I think EarthX is on the right path to being a good business strategy game. I was curious how running a commercial spaceflight company would work as a strategy game. After playing EarthX for a while I had fun with the game. You basically go through the whole process of researching, building rockets, finding contracts, and launching rockets to make money to expand your business. EarthX doesn’t have a ton of content at this point though which leads to the game becoming a little repetitive after a while. It has the framework in place though to be a good game as long as it expands some areas to add a little depth. The game could also do a little more in letting players mitigate their risk when launching rockets.

If you aren’t really into business strategy games or don’t really care about running a commercial spaceflight business, EarthX is probably not going to be for you. If EarthX sounds interesting to you though, I would recommend picking it up or at least keeping an eye on it as it has the potential to be a great game.