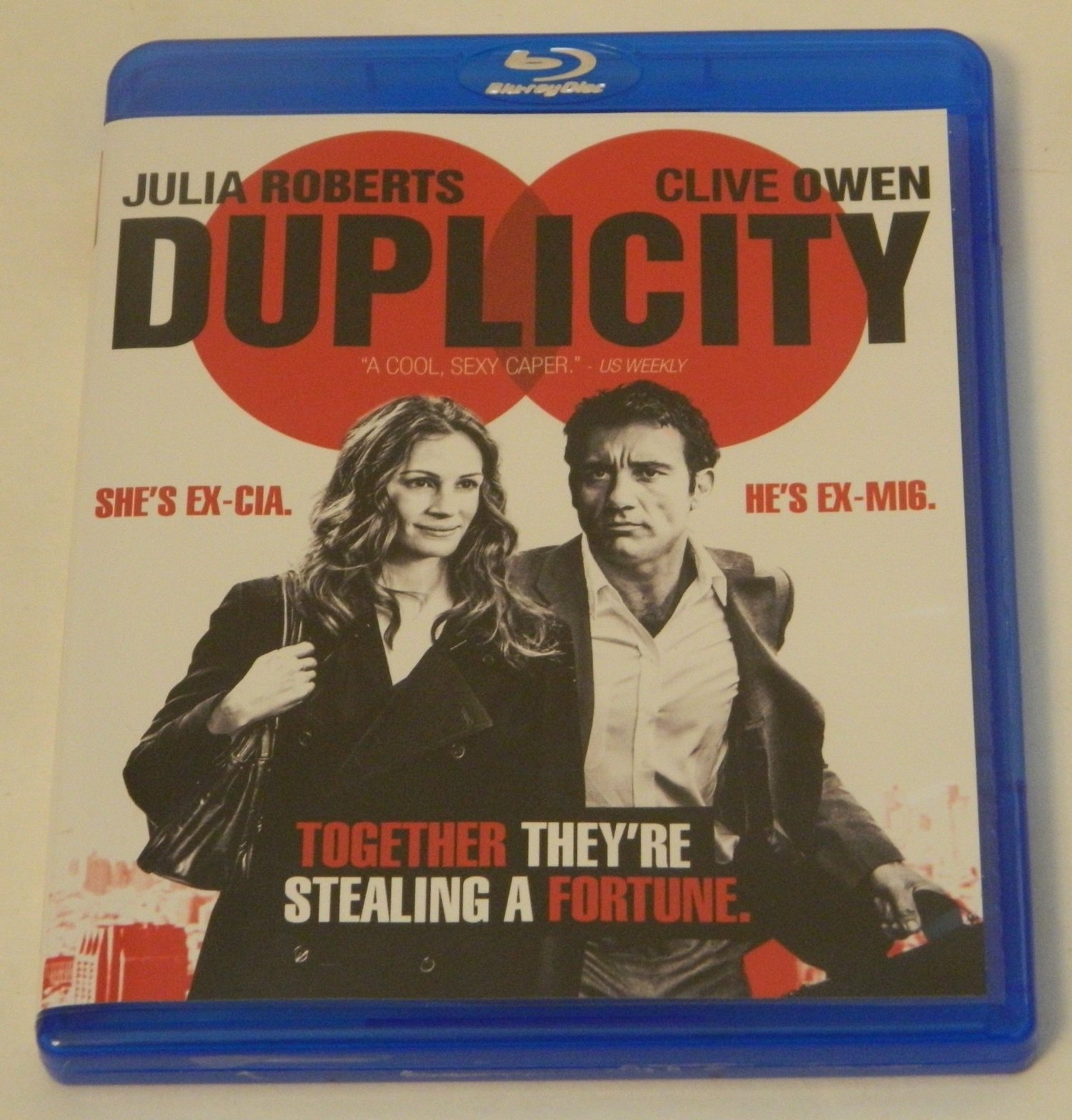 While it might not be one of the biggest movie genres, I have always been a huge fan of the heist movie genre. The Robin Hood storyline of people stealing from the rich has always been interesting. The best heist movies combine this premise with a clever plot as all of the pieces leading to the successful heist are slowly revealed. When a new heist movie is released I usually check it out pretty quickly but movies sometimes slip through the cracks. One of these movies was Duplicity which was released back in 2009. While it might not be your typical heist movie as it focuses on corporate espionage, it still has hints of your typical heist movie which intrigued me. Duplicity has some interesting and unique ideas culminating in a genuinely surprising and intriguing ending which is unfortunately hampered by an occasionally slow and overly complicated plot.

Duplicity stars Ray Koval (Clive Owen) and Claire Stenwick (Julia Roberts) former spies that run into each other during an operation. In the preceding years this leads to a secret love affair. Years later both have left their  spy agencies and have moved into the private sector. When they find themselves on opposite sides of a corporate war between two companies, they must work together to figure out the secret new product that one of the companies is developing and profit off that knowledge. As their relationship began with deceit the two have never truly trusted one another though. Can they trust each other enough to pull off the heist?

When I first saw the plot behind Duplicity it actually reminded quite a bit of the 2005 movie Mr. and Mrs. Smith. The idea of two spies in a relationship working for rival agencies/companies is very similar to Mr. and Mrs. Smith. Other than the premise though the two movies share basically nothing in common. Mr. and Mrs. Smith is an action movie while Duplicity is not. Outside of a few small action scenes at the end of the movie, there is very little action in the movie. Instead it is more of a methodical/academic heist movie. The movie is also presented as a comedy which I honestly don’t see. Outside of maybe a couple scenes (which weren’t that funny in their own right), Duplicity is not funny. While I think Duplicity could have benefited from more action and humor, it does a good job coming up with some interesting new ideas for a heist movie.

This is the thing that I liked most about Duplicity. Having seen quite a few different heist movies the plots are usually pretty similar. A gang of thieves must work together to steal either a bunch of money or valuable assets from a rich person. This is different in Duplicity as the movie instead focuses on corporate espionage/warfare. The movie is basically about how far two companies that have long hated one another will go to try and ruin the other company and two ex-spies trying to take advantage of that fact. While I don’t think corporations go quite as far as the companies do in Duplicity, I am certain that rival companies are regularly trying to steal important secrets from one another. This is actually a really interesting backdrop for a heist movie. I don’t see why it isn’t used more often in the genre.

This premise leads to a pretty interesting heist movie that differentiates itself from other heist movies. The movie is filled with interesting twists that will keep you guessing. I am generally pretty good at predicting twists and yet I will admit that Duplicity surprised me a couple times. This is especially true for the ending. Don’t worry I won’t spoil the ending. It genuinely surprised me though as it was different than any other ending that I have ever seen in a heist movie. If you take the time to think about it it makes a lot of sense. I have to say that I didn’t see it coming though and that is why it might be the best part of the entire movie.

Other than the movie having some interesting ideas and some good twists, the acting is pretty good as well. With Julia Roberts and Clive Owen in the two lead roles it is not that surprising. In addition Duplicity stars Tom Wilkinson and Paul Giamatti as the competing business people who are out to destroy one another. The supporting actors are also quite good. The actors do a good job in their roles and bring life to their characters. The only issue with the acting is that you can make an argument that none of the characters in the movie are all that likeable. All of the characters could be considered the villain in their own way as they are all breaking quite a few different laws.

While there were quite a few things that I liked about Duplicity, there were two pretty big problems with the film that prevent it from being as good as it could have been.

The first problem is that the movie’s plot becomes too complicated for its own good. Every good heist movie relies on twists and turns to keep you guessing. Most of the excitement in the genre comes from wondering what is going to happen next and how the thieves are eventually going to get away with it. At times Duplicity does a good job utilizing some interesting twists and turns. The problem is that it goes too far with the twists. This leads to the movie being a little hard to follow at times. There are too many plot twists where you don’t know exactly what is going on. One of the main storylines that is rehashed over and over again in the movie is that the two main characters can’t trust one another. Therefore they are constantly betraying one another making it is hard to tell who is on what side. This is all resolved pretty well at the end of the movie, but it makes part of the movie hard to follow.

Like with a lot of Mill Creek releases Duplicity’s release is more of a bare bones release. What I mean by this is that the movie doesn’t include many special features. In fact the Blu-ray only features the trailer for the movie. While some people may like watching trailers for movies they have already seen, I am not one of those people. Basically if you are interested in special features the Mill Creek release of Duplicity is probably not going to be for you.

Duplicity is an interesting film. While it is a heist movie at its core it is quite a bit different than your typical heist film. Instead of stealing from a rich person the movie focuses on corporate espionage. This introduces some interesting ideas to the heist genre. It also leads to some interesting twists including an unexpected and yet satisfying ending. The acting is also quite good. Unfortunately the movie’s plot is more complicated that it needed to be. This leads to the movie being a little hard to follow at times and ultimately leads to some slow moments.

Ultimately my recommendation for Duplicity comes down to your opinion of a heist movie based on corporate espionage and a movie that sometimes can be a little slow and confusing. If the premise doesn’t really appeal to you or you like more action packed heist movies, Duplicity probably won’t be for you. People who like the premise though and don’t mind that it can be a little slow at times should enjoy Duplicity.

MPAA Rating: PG-13 for language and some sexual contentSpecial Features: