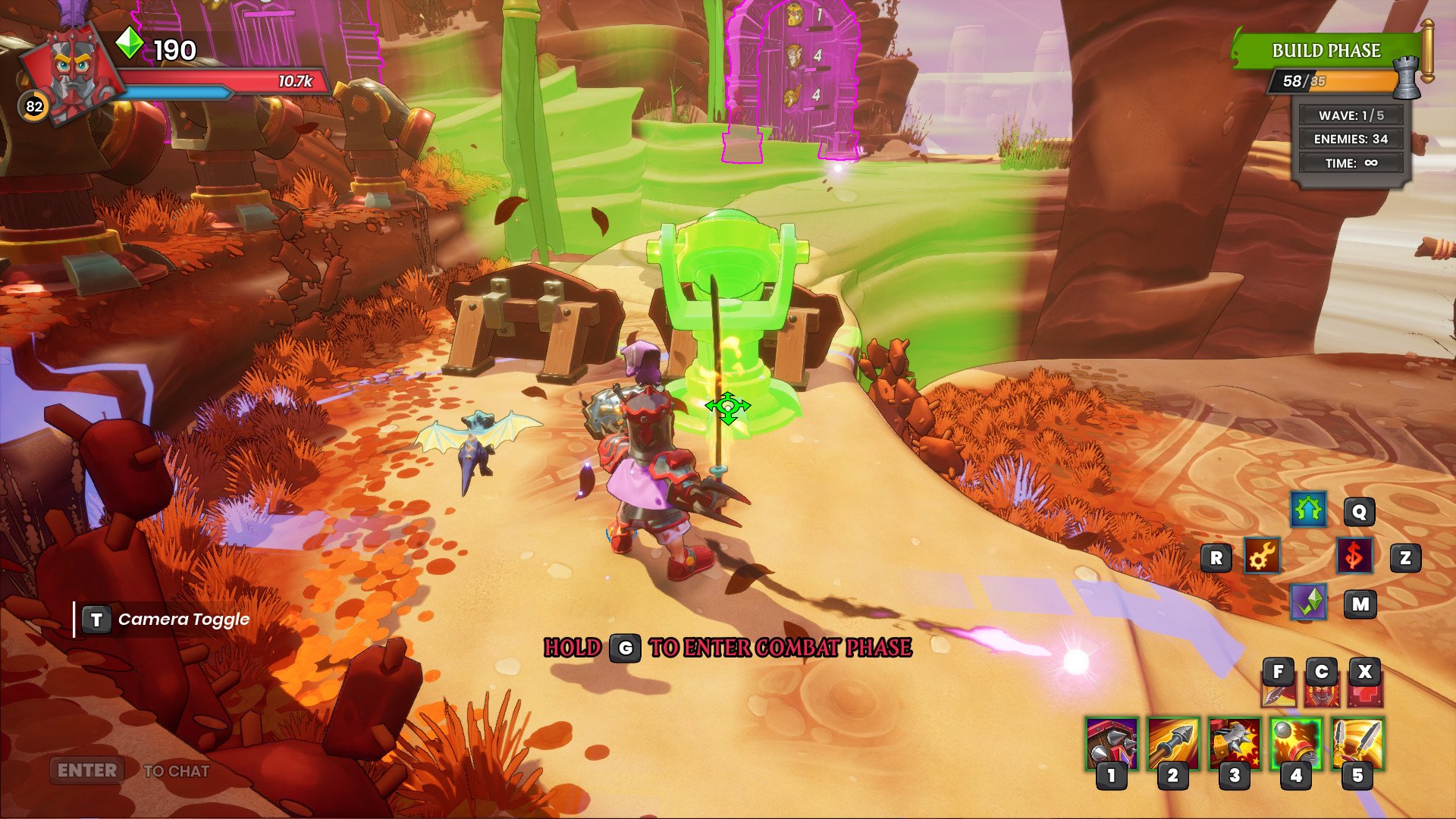 Originally released back in 2011 the Dungeon Defenders franchise quickly developed a strong fanbase due to its unique blend of different gameplay mechanics. The game basically took your typical tower defense game and combined it with an action RPG. As a fan of both genres I was intrigued by the series. While I played the first game a little and enjoyed it, I never ended up finishing it for some reason. I then skipped out on Dungeon Defenders 2 entirely. The third game in the series Dungeon Defenders: Awakened was initially released in early access a while back and late last week finally left for a full release. While I don’t have nearly the same amount of experience with the franchise as others I was intrigued to check out the game as I have always thought the premise behind the franchise was intriguing. Dungeon Defenders: Awakened combines tower defense and action RPG mechanics together to create a surprisingly fun co-op experience even if it has some flaws.

The heroes of the previous Dungeon Defenders games return in Dungeon Defenders: Awakened. Things appear normal in Etheria until a portal opens up in the kingdom which teleports the heroes back in time. Evil forces threaten the world again and the heroes are the only things preventing the destruction of the Etheria kingdom. Can the four heroes work together to build up defenses to fend off the invading enemy forces?

For those of you who are familiar with the Dungeon Defenders franchise you should already have a good idea of what to expect from the game as Dungeon Defenders: Awakened doesn’t drastically change any of the gameplay. Like the other games in the series each player chooses one of the four heroes to defend against the waves of invading forces. In each map there will be one or more Eternia crystals that you need to protect. You can protect the crystals in one of two ways.

The first comes from the game’s tower defense mechanics. Before each wave the players will have a build phase where they can analyze the world and figure out where they should place towers in order to aid in their defense. Each hero has access to different towers which have various strengths and weaknesses. To build a tower you need to use crystals which you acquire by defeating enemies. These crystals can be used to build additional towers or upgrade the towers that you have already placed. In addition each player has a limit on how many towers that they can place as each type of tower counts differently toward this total. Players can use these towers to block off paths or help defeat the encroaching enemies.

In addition to placing towers each player can also use their character to deal damage to the enemies. This aspect is similar to your typical action RPG. Depending on what character you choose you will either use melee or ranged attacks to deal damage to enemies. Each character has one main attack and a number of other special abilities which have their own cooldowns. When a player runs out of health they will have to wait for a short cooldown in order to have their character revived. While fighting you will gain experience which can be used to upgrade your character or the towers you place. In addition many enemies will drop weapons and various pieces of armor that can be used to upgrade the hero’s stats.

As a big fan of tower defense and action RPG games I have always found this combination of mechanics in the Dungeon Defenders series to be really interesting. In theory the two genres share little in common. Tower defense games are mostly about a carefully planned strategy as you decide where to place different types of towers in order to maximize their success. On the other hand action RPGs are mostly about fast paced combat as you try to shoot/hit enemies to destroy them as quickly as possible. Despite these two mechanics sharing little in common they work surprisingly well together.

For the most part Dungeon Defenders: Awakened is very similar to the other games in the series. I am not familiar enough with the series to notice minor differences, but the gameplay seems to be basically the same. Many people have referred to the game as basically a remake of the original game. The game doesn’t drastically change the formula, but it doesn’t really have to because that formula works really well. The action RPG and tower defense mechanics work surprisingly well together. At least with how I played the game the tower defense mechanics were mostly used to secure various paths. With enough firepower you can cover a path without having to worry about it for the entire wave. The action RPG element is then used to support the weaker areas of your defense and clean up the remaining enemies.

I really enjoyed the game though. The combination of different mechanics creates a game that feels like more than either mechanic individually. Dedicated tower defense games and action RPGS may be better at their corresponding elements, but this combination creates something unique. The game is really easy to play as you can quickly jump in and play. The controls work really well and the gameplay is smooth. The game takes everything that people have enjoyed about the franchise for the last nine years and puts it in a shiny new package. Fans of the franchise or the premise in general should really enjoy Dungeon Defenders: Awakened.

While this should be obvious to most players, Dungeon Defenders: Awakened is the type of game that is generally better with more players. The game supports up to four players in co-op. The entire game is playable single player and works fine. I had fun playing the game single player. Parts of the game are pretty difficult with just one player though. I would recommend playing the game with other players as it is simply a more enjoyable experience. Working together to defeat the waves of enemies is really fun as players can work together and divvy up the map so all of the paths are covered. With four different characters and types of towers, players are also better off utilizing the benefits of each of the characters. You can still enjoy the game if you just play it by yourself, but I would recommend playing the game with friends if possible.

As for Dungeon Defenders: Awakened’s style the game is reminiscent of other games from the series. The game utilizes a sort of cartoony/cell shaded style which works well for the game. The graphics look really good. This leads to a few technical issues (more on this later), but the game looks considerably better than its predecessors. The game’s music and sound effects are pretty good as well. The story is kind of basic, but it serves the gameplay fine.

Before I begin talking about my own complaints about Dungeon Defenders: Awakened, I want to quickly address the fact that the game currently has mixed ratings on Steam after an influx of negative reviews. In a lot of ways these complaints are completely valid, but also aren’t super relevant to new purchasers. The biggest complaint in most of the negative reviews is that the game basically wiped their progress in the game after the developers said they wouldn’t. While I personally didn’t lose a lot of progress I could see how this could anger people. This will literally have no impact on people who haven’t played the game yet. Some people also are complaining about the game’s price as the game’s final price was lowered below what the early adopters had to pay. The anger from this decision is justifiable as well since early backers shouldn’t have to pay more than new purchasers. If you don’t own the game yet neither of these should be a factor for you though.

The biggest problem that I had with the game is that the game doesn’t have as much content as you would expect. The game features three worlds with each world having five to six levels. I was a little disappointed that the game didn’t feature more levels. The game features quite a few different modes, but these all utilize the same maps. This means that after playing through all of the levels much of the gameplay revolves around playing the same levels over and over again to gain loot and experience. The challenges may be different, but the overall gameplay won’t change much.

Now this is not going to be a problem for some players. Those that love collecting loot and improving their characters will still have fun replaying the same levels. There is a lot of replay value in the game if you don’t mind playing the same levels over and over again. The problem is that the game could have used some more maps to keep the game fresh for longer. As the previous games in the series featured more maps this is kind of disappointing. The developers plan on adding additional content to the game, but there is a little lack of content at this point.

My other major complaint with Dungeon Defenders: Awakened is that it doesn’t run quite as well as it should. My computer is considerably above the game’s recommended settings and yet there were times where the game would significantly slow down. In order to fix these issues I had to turn the graphic settings down quite a bit which shouldn’t have been necessary for my computer. The inventory and skill menus in particular were really bad as they ran considerably worse than the rest of the game. If you lower the settings enough you can improve performance enough that it isn’t a huge issue. If your PC is closer to the minimum settings though you could have problems with the game.

For those familiar with the Dungeon Defenders series the latest game in the series Dungeon Defenders: Awakened shouldn’t be all that surprising as it doesn’t drastically change things from the original game. For those not familiar with the series though the whole concept behind the game is really interesting. The game basically combines tower defense mechanics with an action RPG. You have the opportunity to build towers which help defeat the enemies closing in on your location. In addition you can use your ranged/melee weapon to clean up the remaining enemies. This combination of mechanics work well together to create fun and satisfying gameplay. The game’s atmosphere is pretty good as well. I would say that the biggest problem that I have with the game is that it doesn’t have a ton of content at this point. There are plenty of different modes and challenges, but the number of levels is limited where you will have to keep playing the same levels as you upgrade your characters. The game also has a few technical issues where it doesn’t run as well as it should have, and the game could have done a better job transitioning from early access to a full release.