The game of Dunce has two different ways to play the game. I will begin with the basic rules which is the more well known way of playing the game but I have also included the rules for the more complex version of the game.

Be the last player to complete their dunce figure.

Each player takes all four pieces of one of the colors. Players figure out who will roll the die/spin the teetotum (spinning top) first.

On a player’s turn they spin the teetotum/roll the die to determine what they will do on their turn. To start the game a player’s figure is disassembled. A figure is assembled in the following order: stool, body/torso, head, and hat. If a player rolls the symbol corresponding to the next piece of their figure, they place that piece on their figure and they have to roll the dice again. 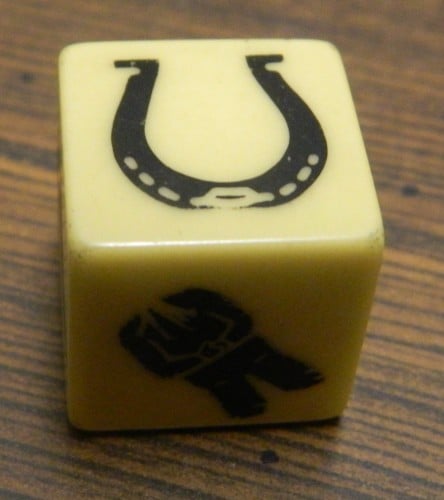 The current player rolled the horseshoe symbol. All of the other players must add their next piece to their figure.

When a player adds the cap to their figure, they are eliminated from the game. The last player to place the cap on their figure wins the game. 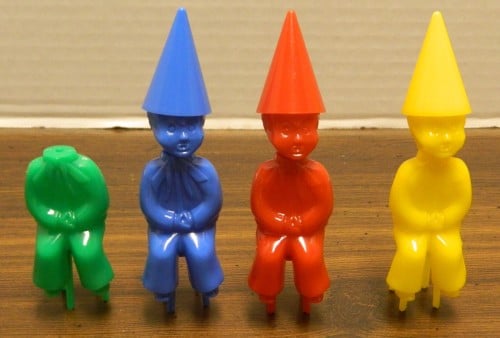 Since all of the other players have completed their figures, the green player has won the game.

The objective of the advanced game is the same as the basic rules. Players try to avoid assembling their dunce figure.

In the advanced rules the game does not use the die/teetotum. Instead the advanced game is played as a word game. The first player each round starts the round by saying a letter out loud. Each player in turn adds additional letters to the letters already said making sure that the string of letters actually forms a word. Whenever a player adds a letter that completes a word, that players adds the next piece of their figure and a new round begins. If a player does not add another letter within a reasonable amount of time they are forced to add a piece to their figure and a new round begins.

When adding letters any player can challenge that the letter that was just added doesn’t actually spell a word. The player that added the letter needs to say the word that they were thinking of when they added the letter. If the player doesn’t have a word in mind or if the word is misspelled, they have to add a piece to their figure. If the player had a correct word in mind, the challenging player has to add a piece to their figure. Either way a new round begins.

Another rule that players can choose to add to the game that adds more strategy is the ability to add the next letter to either the end or the beginning of the string of letters.

While not Schaper Manufacturer Company’s most famous board game, Dunce is probably in the top half of their most recognizable games. With a name like Dunce it is pretty hard not to stand out after all. As outlined in our history of Schaper article, the Schaper Manufacturing Company was mostly known for children’s games and their early games in particular mostly dealt with rolling dice which was used to build something like the Cootie Bug or the “dunce figure” in Dunce. Dunce actually plays a lot like Cootie except that it is much shorter and you are trying to avoid building your figure.

Let’s start with the die rolling game. Simply put this version of the game is really bad. Essentially you roll the die and hope to roll the horseshoe or any symbol other than the symbol for the next piece of your figure. That is all there is to the game. I question whether it really is even a game since you make no decisions whatsoever in the game. You just roll the die and hope you get a favorable outcome. Unless you somehow can influence which side of the die you roll you will have no impact on the game. If I was just rating this version of the game it would have easily gotten 0.5 stars since it is not a good game.

The other version of the game is actually kind of interesting. It is far from a great word game but it is kind of fun and actually makes you think. It may seem easy but it actually makes you really think especially when the string of letters gets longer since it becomes pretty hard to come up with another letter that doesn’t complete a word. If you add the rule where you can add letters to the beginning and end of the word there is even more strategy in the game.

The most interesting part about the word version of the game is that there is actually more strategy to it than you would expect. Basically your goal in the game is to prevent yourself from being backed into a corner while doing the opposite to your competition. When adding your next letter you need to think ahead to make sure you aren’t backing yourself into a corner. You need to leave enough flexibility that you have a letter to add that won’t complete a word and force you to take a piece. On the other hand you can try to add a letter that forces one of the next players into completing the word and thus having to take the next piece of their figure. The word portion of the game is not highly strategic but with smart play you can improve your odds in the game.

The thing is you don’t really need the game for the word version of the game since the figures are just used to keep track of score. You could easily just play the game with a pencil and some paper keeping track of how many rounds each player has lost. The components for the game are not bad for their age but they really aren’t needed unless you are playing the die version of the game.

While the die version of the game is a terrible game and deserving of a 0.5 rating, the word variant is considerably better. The word variant is probably worthy of around a 3 rating. Therefore when giving Dunce its’ final rating I had to balance out the two game variants in order to come up with the final rating.

Overall Dunce is not a great game. The die rolling version of the game is really bad since it relies totally on the luck of the die. The word version of the game is kind of interesting though. It is not something that I would regularly play but it is an interesting word game. You don’t really need the game itself to play it though. Unless you have fond memories from your childhood or are a board game collector, I would recommend avoiding the game.

If you would like to purchase the Dunce game, you can purchase it on Amazon here