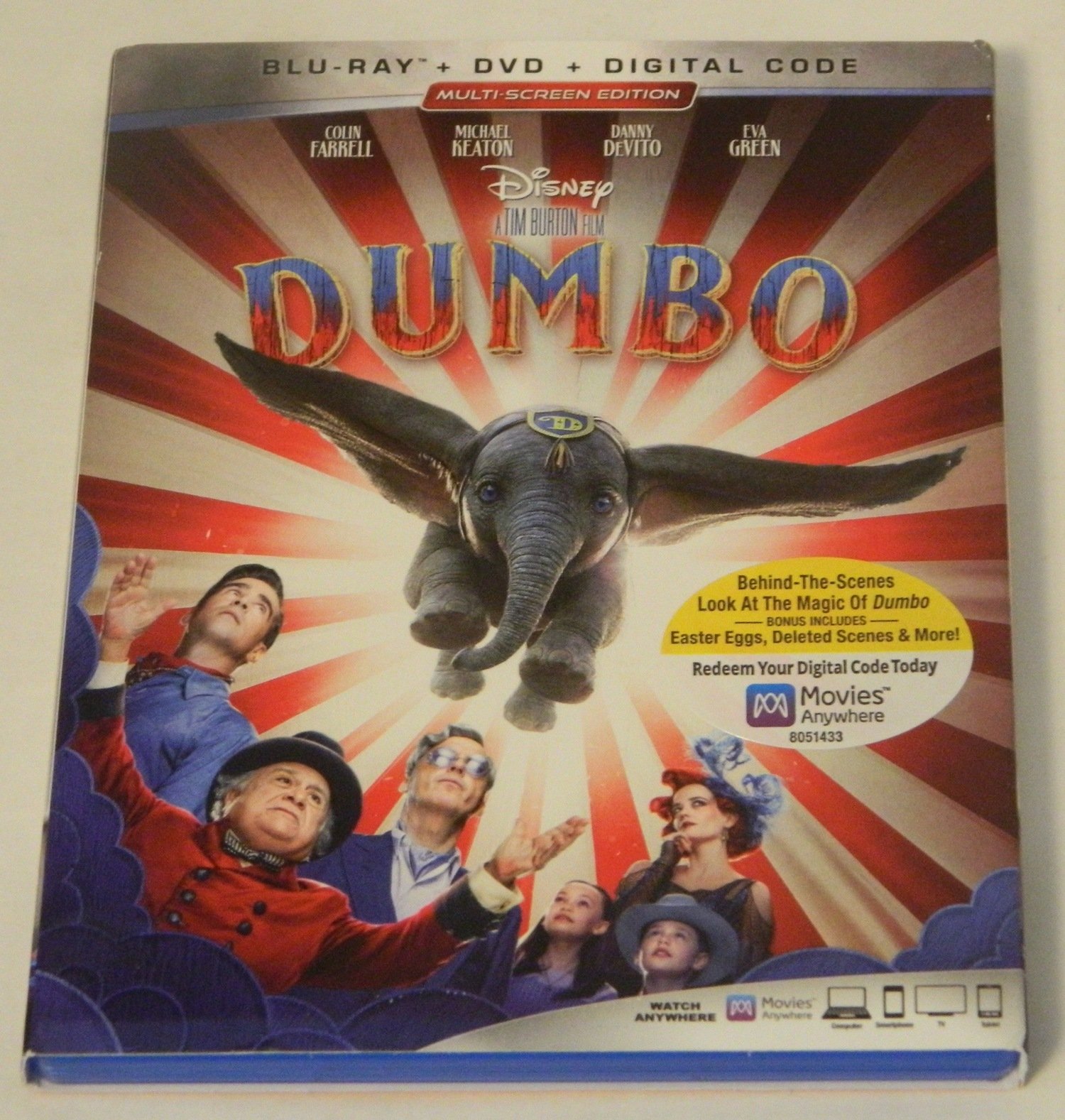 Originally created as Disney’s fourth animated film back in 1941, Dumbo is widely considered one of the classic Disney animated films. While I like Dumbo, I don’t have all of the fond memories of the film that some people have. The original Dumbo had some cute and nostalgic moments. At barely over an hour long though not a whole lot happens in the film. While not everyone is a fan of the recent influx of live action remakes of Disney classics, I actually don’t mind as none of the films have been bad in my opinion. Most of them have some interesting new takes on the classic films. Despite not being the biggest fan of Dumbo I was intrigued to see what the live action remake would do with the story. In some ways the 2019 Dumbo improves upon the original film with fantastic visuals and a more detailed story, but it drags the story too thin and fails to reach the nostalgic levels of the original film.

The 2019 live action remake of Dumbo takes place in the 1920s after the end of World War 1. Holt Farrier who lost an arm in the war returns to the Medici Brothers Circus to reunite with his two children who recently lost their mother. The circus is going through hard times. To try and revitalize the circus they acquire a mother and baby elephant. The baby elephant is different from your normal elephant though due to its extremely large ears. This initially leads to ridicule by visitors until it is discovered that baby Dumbo can use his ears to fly. This brings attention to the circus and an entrepreneur V. A. Vandevere who wants to bring Dumbo and the rest of the circus to a much larger audience. Things are not as they appear though which forces Dumbo to use his ability to fly to save the day.

When it comes to a lot of the recent live action Disney remakes, most of the films follow the original story pretty closely. The overall plot between the two movies is usually quite similar. The main differences are a couple of small changes made to modernize the story as well as expanding on the story in a couple ways. This is not really the case in Dumbo mostly due to the original film only being 64 minutes long. The live action remake is almost twice as long at 112 minutes. As the new film is considerably longer it was obvious that the two movies would be quite different.

The core of both films are similar as they both focus on Dumbo an elephant that uses his large ears to fly through the air. Both stories also have a moral about believing in yourself. This is where the two stories diverge quite a bit. Outside of the title character, the live action film is quite a bit different than the original Dumbo.

The biggest change between the two films is that the live action film focuses heavily on the human characters that are exclusive to this version of the story. The original Dumbo focused on Dumbo and the other animal characters as they tried to give Dumbo the confidence to believe in himself. The 2019 live action version of the film eliminates most of the animal stories entirely. Timothy is basically written out of the film as there are only a couple brief appearances of a mouse that is supposed to represent Timothy. I am guessing this was mostly due to the film taking a more serious approach to the story. Having talking animals would have kind of killed what the movie was trying to do. The elimination of a lot of the animal stories also probably has a little to due with the film having an undertone of taking about animal cruelty in circuses.

While the story of Dumbo is still an important aspect of the movie, the 2019 version of the film deals more with the circus itself and the main human characters. In addition to Dumbo’s story, the main storyline is about a father and his two children getting to know one another after the father was away at war. There is also the patented Disney storyline of dealing with the death of a parent. The movie also takes a look at the struggling circus itself, and some of the characters that make their life at the circus.

Other than the change of focus from the animal characters to human characters, the biggest change in the 2019 version of Dumbo is that it modernizes the story while also going into more depth. As far as modernizing the story, it eliminates some of the more controversial elements from the original film. The crows that were arguably racist aren’t in the film. The movie also doesn’t have the scene where Dumbo drinks alcohol and starts to hallucinate. The movie is pretty clever in paying homage to the “drinking” scene though without actually having Dumbo get drunk. As far as expanding upon the original story, Dumbo starts flying in the new film before the halfway part of the film. This allows the movie to get into what happened after Dumbo first flew.

Visually I have to give the advantage to the 2019 version of Dumbo. While the original Dumbo is a classic and looks good for its age, the 2019 version of the film is more visually impressive. The film does rely on a lot of CGI, but it also has a lot of practical effects as a lot of the sets were actually built. While I obviously wasn’t alive in the 1920s, the film does a really good job recreating the era. The movie also has the typical Tim Burton style which leads to its own unique look. This is most prevalent in the film’s theme park which looks like a twisted version of Disney World/Land. At times the reliance on CGI sticks out (mostly with Dumbo himself), but the CGI for the most part is really good. On Blu-ray the movie looks fantastic, and I am guessing it will look even better in 4K.

The other area where I think the 2019 version might be better regards the story. As the original movie was barely over an hour long, not much actually happens in the movie. The 2019 version has a much more fleshed out story. It has more character development and creates a much larger world than the original film. This is to be expected from a movie that is almost twice as long as the original movie. The movie also does a good job creating cute scenes for Dumbo, and Dumbo in general shows a surprising amount of emotion.

While this extended length fleshes out the story more, it leads to the biggest issue for the movie. Despite the movie being less than two hours long, it tends to drag at times. I think this comes from most of the characters being pretty boring. The main character (Colin Ferrel’s) is pretty bland. The villain is also predictable and quite boring as well. Honestly the best characters in the film are the supporting characters that don’t get enough time in the movie. Danny DeVito’s character is probably the best as he brings a lot of the humor to the film. Unfortunately he gets relegated to the background towards the end of the film.

Its not just the characters though. The overall plot has some really interesting ideas that showed a lot of potential. Unfortunately the movie never takes full advantage of them. This leads to a lot of interesting ideas that are never fully utilized. There are parts of the story that are interesting which are followed up by some dull drawn out moments. While I appreciate that the film expanded on the original film, it adds some storylines that don’t really go anywhere. I liked the overall story, but there are slow points in the film.

As far as special features the Blu-ray contains the following:

Overall I thought the special features were pretty good. The behind the scenes features do a pretty good job showing you how the film was created. They don’t go into a ton of detail but they are interesting enough that fans of the film should check them out. The deleted scenes are pretty typical, but I thought a couple of them should have stayed in the film. As a fan of Easter eggs, I enjoyed the Easter Eggs on Parade feature. The Clowning Around feature is basically what you would expect out of a gag reel.

At the end of the day the 2019 version of Dumbo is a solid but unspectacular movie. The film does some things right, and fails in other ways. I was actually surprised that it differs quite a bit from the original movie. The basic story points are similar but the 2019 version shifts the focus towards the human characters while expanding on the original film. On the positive side the film looks fantastic with great CGI and visual design. I also like how the film expands on the original film in some areas. Unfortunately the characters are kind of dull. The movie also have some slow points as some of the storylines don’t really go anywhere.

Your opinion of the 2019 version of Dumbo is probably going to come down to two things. First do you like the recent batch of life action remakes. Dumbo is pretty average compared to most of the other remakes, so if you don’t really care for them Dumbo probably won’t be for you. Otherwise it depends on your opinion of Dumbo. As long as you don’t hate the original story, there are things to like about the remake. If you want to see a different take on the story of Dumbo, I think you will enjoy the 2019 version of the story.

Circus Spectaculars, Elephant in the Room, Built to Amaze, Deleted Scenes, Easter Eggs on Parade, Clowning Around, Baby Mine Performed by Arcade Fire