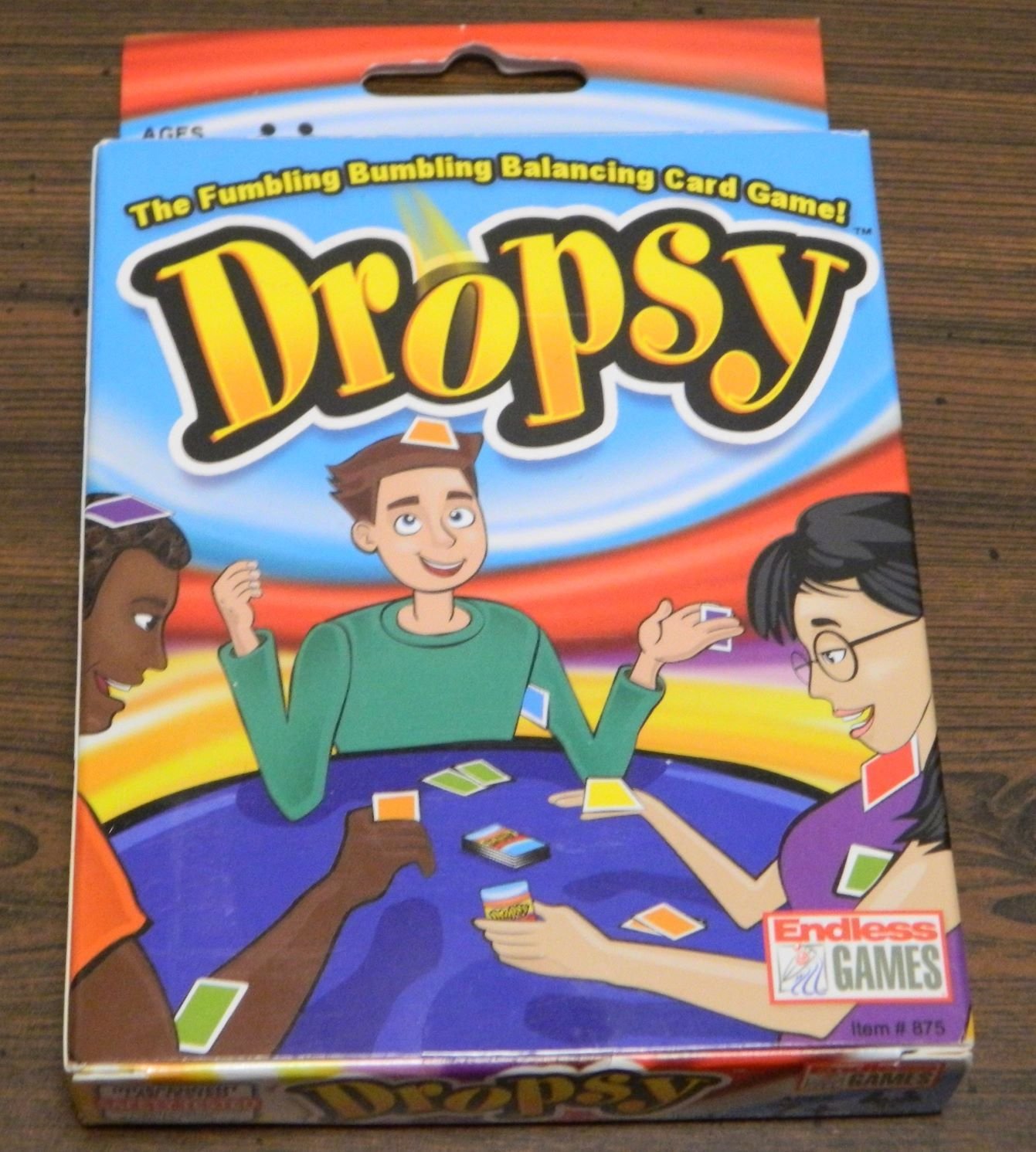 When I first saw Dropsy I honestly didn’t know what to think. I am generally a pretty big fan of games that try to do new things. All things considered I will always give credit to a game that tries to do something unique. There is no denying that Dropsy tries to do something new. While there may have been other games created over the years with a similar premise I have yet to see or play one. (Thanks to a comment I have learned that the card game Yogi created by  Behrooz Shahriari shares a similar premise.) The basic premise behind Dropsy is that you will have to hold a bunch of cards on certain parts of your body as you wait for the right cards to come up for you to win the game. While this seems unorthodox I actually thought it sounded kind of interesting. Dropsy is a genuinely unique experience that fans of silly games will probably enjoy even if the premise becomes a little repetitive after a while.

How to Play Dropsy

The players will take turns drawing one card from the draw pile with play passing clockwise. If the player draws a card matching their color they can add it to their “Collection”. A player’s Collection is placed face up on the table.

When a player draws a card that doesn’t match their color they will read the words printed on the card. Each card will indicate where players have to hold it. These directions include:

If at any point during the game a card falls from the place that a player is holding it and it loses contact with the player, the player must discard all of the cards they are holding plus the cards in their Collection. All of the discarded cards are added to the bottom of the deck. If a card should fall from where it was placed but it still maintains contact with the player it does not trigger this effect. The player can pick up the card and return it to its previous position.

The first player to get keep three cards in their Collection wins the game.

To make the game more difficult players can agree to having to get more cards in their Collection in order to win.

My Thoughts on Dropsy

After playing Dropsy I can honestly say that I don’t remember ever playing a game quite like it before. It might seem kind of strange but I was actually intrigued by the game’s premise. At its core Dropsy is a dexterity game. While the game has a few other mechanics most of the gameplay comes down to trying to balance cards on different parts of your body. Depending on what the card says you will have to balance cards on various parts of your hand, arm, and head. You need to balance these cards since if one card falls you will lose all of the cards that you have collected resetting you back to where you began the game. You could be on the cusp of winning and lose all your progress just because one card fell.

I will say that I found the game to be kind of easy though. The game has six different types of cards and I would say that four of the types are quite easy to deal with. All of the arm and hand cards are really easy to deal with. The rules don’t specifically mention whether you can just stack cards of the same type and hold all of them together. If so these cards are really easy as one additional card is not going to make them any harder to hold. For an experiment we even tried spreading out these cards as much as possible and they still weren’t hard to balance. The only cards that were somewhat hard to deal with are the head and chin cards. The head cards are somewhat hard to deal with as any slight movement of your head can easily make the cards slide off. The chin cards are hard because it is kind of uncomfortable trying to hold cards with your chin. Both of these cards are even more difficult if you have cards of both types at the same time. As the game is designed more for children and families it is not all that surprising that the game is kind of easy. If you are an adult and are looking for a challenge though you will likely be a little disappointed.

Another reason why the cards are easy to balance is the rule where if a fallen card still touches the player they can return it to its previous location without incurring a penalty. It somewhat depends on how lenient you are with this rule, but cards will regularly fall off and either land on your lap or legs allowing you to put them back. While I could see keeping this rule in place for children, I am not a big fan of it as it makes the game too easy. I personally would eliminate the rule as it is usually easy enough to balance the cards and it could potentially lead to arguments as players debate which cards are still touching players and which aren’t.

In some situations I can actually see it being beneficial to purposely drop a card. If you are already balancing a lot of cards or you draw one of the hard to balance cards you may want to purposely drop your cards. If you have yet to get a card that matches your color you aren’t really out anything dropping cards as you will just lose the cards that you are balancing. You might be better off strategically dropping cards every so often to limit the number of cards that you have to balance once you actually have cards to lose.

Other than the cards being kind of easy, I wish there was a little more variety to them as well. Four of the six types of cards feature player’s hands and arms. I found these cards to be the most boring as they are the closest to holding cards normally. I kind of would like to see what it would be like having cards that you have to balance on your nose, forehead, leg, or even foot as those would have been more interesting than another hand/arm card.

Outside of balancing the cards there isn’t a whole lot to Dropsy. Players basically take turns drawing cards hoping to draw one that matches the color they chose at the beginning of the game. Draw the right color and you can set it aside as you are one step closer to winning. Draw any other color card (the much more likely option) and you will have to balance it along with all of the other cards. Thus outside of cheating there really aren’t any decisions to make in the game as your fate will be determined by the cards you draw.

At this point it shouldn’t come as much of a surprise that Dropsy is a really simple game. I honestly think the game could be taught to new players within a minute or two. Basically the game boils down to drawing a card. If it matches your color set it aside. Otherwise you have to balance it on your body based on what is written on the card. It is pretty obvious that the game was designed as more of a children’s/family game. While adults can enjoy the game I think it will appeal more to children as I would guess most children would love the game’s silliness.

While I had some fun with Dropsy I will say that it doesn’t have the longest shelf-life. A lot of it is due to the game being so simple. The entire game consists of drawing cards and then balancing them on different body parts. That is basically all there is to the game. The game works for a while due to it being unlike any other game that I have played. This novelty runs out after a while though. After a game or two it becomes a little repetitive. Therefore the game is more the type that you play once or twice and then put away for later.

Speaking of length Dropsy’s can vary significantly. To illustrate I am going to describe two games that we played. I would say the first game probably took around five to ten minutes. I would attribute this somewhat to the fact that two players got really lucky and drew two cards that matched their color. One of those players was able to draw their third matching card before they were ever at risk of dropping one of their cards. Then in the next game it felt like players would never draw the colors that they needed. Players would be balancing over fifteen cards and still not have a matching card. This game took at least 20 minutes as no one had any luck drawing the necessary cards. Of the two games I would say that a majority will likely be between the two outcomes, but closer to the longer game as the winner was really lucky in the first game. The good news is that if you want to make the game shorter you should be able to just remove one or a couple of the colors shrinking the deck and improving the odds that you will draw a card that you need.

As for the components they are basically what you would expect. Dropsy’s components just consist of cards. The card thickness is about what you would expect. The artwork is solid as they are easy to read and illustrate what you need to do with them. Two of the colors look somewhat similar though where you have to directly compare them to see if they match. I thought the cards were pretty solid overall. By the nature of the game itself though I could see the cards developing creases and other wear after extended use. With the game retailing for less than $10 though I honestly don’t think you could have expected much more from the component quality.

Should You Buy Dropsy?

I would say that most people are likely going to have a pretty good idea about whether they will like Dropsy just from hearing the game’s premise. The premise behind Dropsy is quite silly. Players basically balance cards on different body parts as they wait to draw cards that match their chosen color. This is basically all there is to the game. On the surface the premise is pretty original and kind of fun. Having to balance a bunch of different cards at the same time is likely going to appeal to people that like silly games. I found the game to be on the easier side though. The game also relies on a lot of luck since if you don’t draw the right cards you are going to have no chance of winning the game. This ultimately leads to a game that can be kind of fun, but it is much better in shorter doses.

My recommendation for Dropsy basically comes down to your opinion of the premise. If you think the premise of balancing cards on different parts of your body sounds dumb/silly, Dropsy won’t be for you. Those who think the premise sounds interesting though will likely have fun with Dropsy, especially if you have children,  and should consider picking it up.