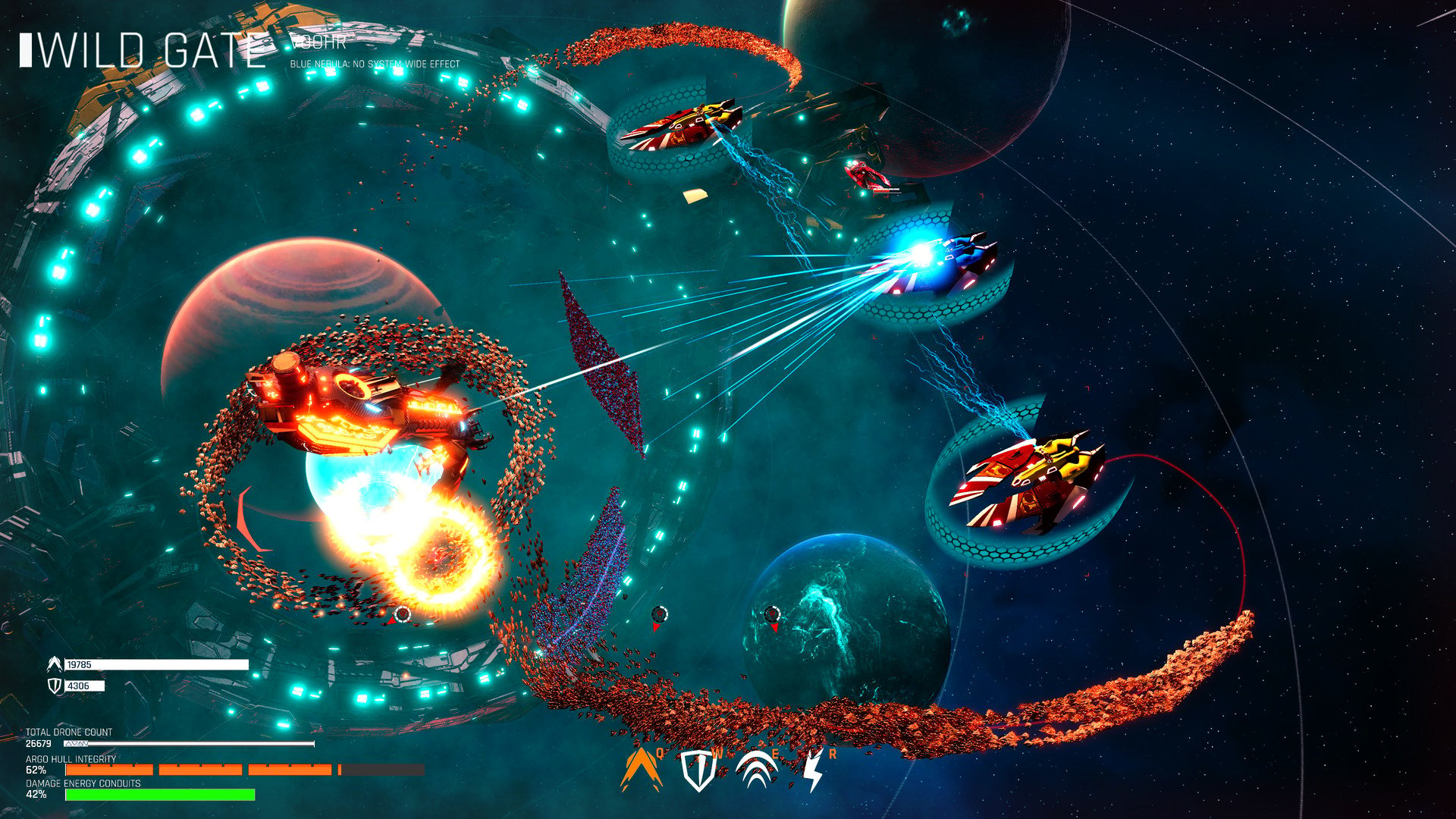 Any regular reader of Geeky Hobbies will know that I am a big fan of video games that actually try to do something original. Games that stick to the typical formula can still be enjoyable, but I like when developers try to do something original. When I first saw Drone Swarm I was intrigued as the game looked genuinely original. There have been many different types of tactical strategy games created where you control an army and try to defeat the opposition. Very few games allow you to control a massive swarm of 32,000 drones though. This is the premise behind Drone Swarm as you give orders to your drones to help defeat your enemies. Drone Swarm is a truly original experience that takes the tactical strategy genre into a genuinely new and exciting direction.

Drone Swarm takes place in the year 2118. Earth is all but destroyed by an alien swarm of drones. Most of the world’s population is killed and large portions of the planet are now uninhabitable. All seemed lost until a group of psionics were able to control the swarm of drones and stop the attack. Humanity gained control over the swarm and created a starship to search the galaxy for a new Earth before their home becomes totally uninhabitable. Humankind is not alone in the galaxy though as they are quickly plunged into a war between alien races. Can humanity navigate the dangerous galaxy and finally find a new planet to call home?

Drone Swarm is basically built entirely around the concept of being able to control a large swarm of drones. To be more specific you are in control of 32,000 drones. Basically you need to use these drones in order complete your objective in each mission. This mostly entails destroying enemy ships, protecting other ships, or surviving long enough in order to scan an object. In the game you basically act as the commander giving orders to the drones. This is done by choosing one of the actions, and then drawing a path with your mouse. Your drones will then perform the action over the path that you drew.

The actions in the game basically break down into four different types. First is the attack action. Draw a line and drones will follow that line attacking any enemies that they encounter. The second action creates a wall that protects against enemy fire. This will block enemy fire from hitting your ship for a period of time until enemy ships are able to create a hole in the wall. The third action that you acquire in the game allows you to use your drones to push things. You can use this ability to push asteroids away from your ship and towards enemy ships, or push enemy ships interrupting their shots. Finally you can create a wall that gives various buffs to your drones or hurts enemy ships.

The game is broken down into encounters. Each sector has a number of main encounters which you have to complete in order to advance the story. There are also a number of optional encounters which add to the story while also giving you more experience and access to new abilities. At the beginning of the game you start with very basic abilities. As you advance in the game and complete quests you will unlock additional abilities which makes each of the actions more powerful while also giving them additional abilities.

I have to say that I have played a lot of video games, and I can’t recall playing one quite like Drone Swarm. In fact I am not entirely sure what I would classify the game as. Probably the best comparison is a tactical strategy game, but that isn’t even a great comparison. I think this is mostly because I haven’t seen another strategy game that has utilized a drawn line mechanic before. In most strategy games you just tell your units where to go and then they will attack if enemies get near their position. In Drone Swarm how you draw the lines is really important. When attacking you need to create a path that moves through the enemy ships. While defending you need to create a path that blocks enemy attacks. You need to attack and defend at the same time as you need to destroy the enemy ships, but you can’t leave your ship exposed as it otherwise will be destroyed quickly. As you only have a limited number of drones you need to pick and choose which actions are most important. You also need to be willing to adapt to the current situation in order to maximize your drones.

I was initially interested in Drone Swarm because the main mechanic seemed really unique and original. In practice it actually works really well. The gameplay on the surface is really simple as you basically just draw lines with your mouse. There is quite a bit to the mechanic though as you need to optimize your drones by utilizing the four different actions in tandem in order to defeat the enemy ships. Early in the game you need to learn how to time the other ships’ attack patterns in order to create attack paths that will hit them. As you get more abilities you can start slowing down enemy ships with walls and then hitting them with a bunch of attacks before they are able to escape.

The gameplay is just really satisfying. You need to be on your toes at all times as one misstep and your ship is likely to be destroyed. You need to keep track of multiple ships at the same time and utilize your various abilities to take them out one by one. Most battles entail the same basic gameplay of defending your own ship while destroying all of the enemy ships. The game does mix things up though as some encounters are more about destroying a large fleet while others have you defending another ship(s). Then there are missions where you have to defend yourself while also scanning an object in the area. These missions are interesting as you have to choose how many drones you want to dedicate to scanning. The more you send to scan the object the quicker you can leave, but it also uses more of your drones limiting how many you can use for attack and defense.

I really enjoyed the game’s encounters, but in some ways I wish they were a little longer. You could actually finish many of the encounters within just 1-3 minutes if you succeed on your first attempt. With how vulnerable your ship is it is beneficial that the battles aren’t that long. In some ways though I kind of wish the battles were a little longer. I really would have liked to see epic battles where you have to fight wave after wave of ships. Usually you only have to deal with a couple smaller waves of enemies in an encounter though. The game was never going to be able to have half hour plus battles, but I wish they were a little longer. I am actually kind of interested in seeing a survival game mode added at some point where you try to survive for as long as possible.

I would say that one of the biggest problems that I had with Drone Swarm is that the difficulty can vary quite a bit. The game has three difficulties ranging from story mode to challenging to hard. I ended up playing the game on challenging mode. I would say that a majority of the encounters are about the right difficulty as they provide challenge without being too difficult. The game does have some levels that defy this trend though. Some levels are quite difficult where I ended up dying a lot. I don’t know if this was because these levels were particularly difficult or if it was just that I was getting used to the game’s mechanics. Then there were some encounters that were quite easy where I had no trouble beating them on my first attempt. The difficulty kind of felt up and down throughout the entire game.

As for the game’s visuals I was honestly quite impressed. The game’s cutscenes utilize a comic book style where they aren’t really animated. Some people will like these and others won’t. The game itself looks fantastic though. It is hard to not admire the number of drones that are on the screen at any given time. The game might be fudging the 32,000 drones (I obviously didn’t count them), but there are a lot of them on screen at any given time. Sending out your drones for the various actions looks impressive where it feels like you are controlling a massive swarm of drones. Outside of the drones the rest of the game looks really good as well. For a game developed by an indie studio I don’t think there is much more that you could have asked for from the visuals.

I had some mixed feelings about the story. The story is written pretty well and all of the dialog is voice acted. There was some time put into the story as it doesn’t feel like an afterthought. The story has some interesting ideas that I haven’t seen before. Drone Swarm’s story does seem to take a lot from other sci-fi stories though. I wouldn’t say that the story is a big selling point for the game, but I don’t really see it as a negative either.

At this point I haven’t quite finished the game yet so I can’t give you a definitive length. Based on achievements and the game’s world map I would guess that the game features five different sections. So far I have played through four sections which equates to about 50 different levels. It took me around four and a half to five hours to get through the four sections. The game’s Steam page does mention that there are supposed to be around 100 encounters though so it may be longer than it first appers. How much time you get out of the game is really going to depend on how good you are at it and whether you play the optional missions. I would say that about half of the missions seem to be optional so if you do the minimum it will take considerably less time than if you finish all of the missions.

I was initially intrigued by Drone Swarm because the premise of controlling a massive swarm of drones looked really interesting. This was mostly because instead of just telling your drones where to move and attack, you instead give the drones a path they should traverse in order to set up attack patterns and create defensive positions for your ship. This is a genuinely unique mechanic that I have never seen used in another game before. Even better it works really well leading to a really exciting battle experience where you have to mix and match strategies and change things up on the fly. The battles are really engaging even if I wish they were a little longer. The difficulty can be a little up and down as well. This is all wrapped up in a game that looks fantastic as your drones are sent into action. The story kind of feels generic for a sci-fi game, but is not bad either.

My recommendation comes down to your opinion of the premise. If the idea of controlling a swarm of drones in a tactical strategy game doesn’t sound all that interesting, it is unlikely to be the game for you. Anyone with any interest in the premise though will likely really enjoy Drone Swarm and should consider picking it up.