Originally created back in 1965, Trouble was a simplified variant of Pachisi that utilized the Pop-O-Matic dice roller component. I remember really enjoying Trouble when I was young. I can’t remember playing the game since I was a kid though. Despite being a really popular children’s game, Trouble surprisingly doesn’t have the spinoffs/sequels like most popular mainstream games. As a matter of fact outside of the many re-themed versions of the game, Trouble only appears to have had one spinoff game which is the game I am looking at today Double Trouble. Double Trouble may be better than the original Trouble due to having a little more strategy, but it fails to be anything more than a pretty generic children’s roll and move game.

How to Play Double Trouble

A player begins their turn by popping both dice rollers. One of the rolled dice will be used to move one of their pieces while the other die will move the other piece. When moving a playing piece you will move it in the direction that the arrow is pointing. The arrow on the playing piece can never be turned unless you land on the center star (see below). You must move both pieces the full number of spaces rolled on the dice. You may move your playing piece through a space occupied by another playing piece. One pawn must be completely moved before the other pawn can be moved though.

While moving a playing piece it can land on certain spaces which lead to special actions taking place.

When a player lands on a star space they will get to turn one of the wheels on the gameboard. They can choose to turn any of the wheels as much as they want in any direction. The wheel must end in a position where all of the star spaces are next to one of the spaces on the gameboard. If you land on the space with the first piece you move though, you must turn the wheel before you move your other piece. 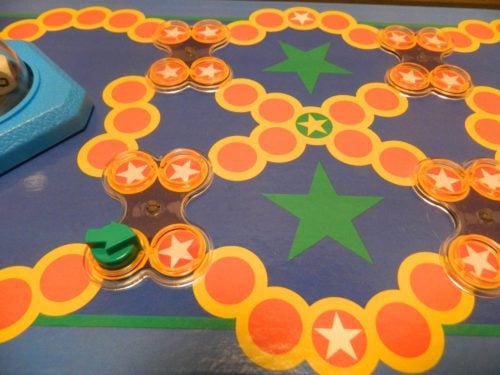 The green playing piece has landed on one of the star spaces. They will either turn the detour wheel that their piece is on or one of the other detour wheels. 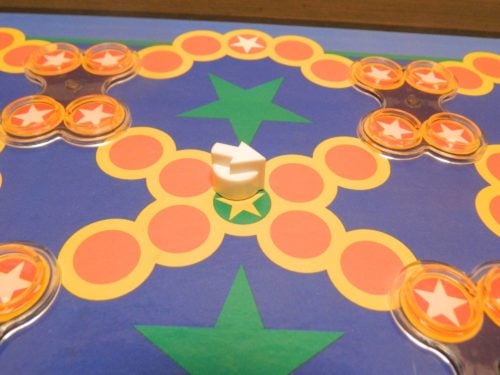 The white playing piece has landed on the center star. They will get to immediately turn one of the detour wheels. At the beginning of their next turn they will also have the opportunity to turn their playing piece in whichever direction they prefer.

Landing on a Playing Piece

If while moving both of your pieces end up on the same space, both pieces will get sent back to the start spaces. 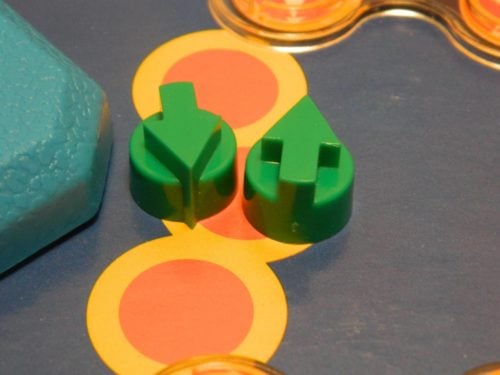 Both of the green player’s pieces have landed on the same space. Both pieces will be sent back to the start.

If your piece lands on a space occupied by one of the other player’s pieces (not including the start spaces), you and the player who controls the other piece will compete in a pop-off. Each player chooses which dice popper they will use. After a player says “go” both competing players will keep popping their dice. This will continue until one of the players roll a six. The player who rolls the six will get to keep their piece on the contested space. The other player will return their piece to one of the start spaces. 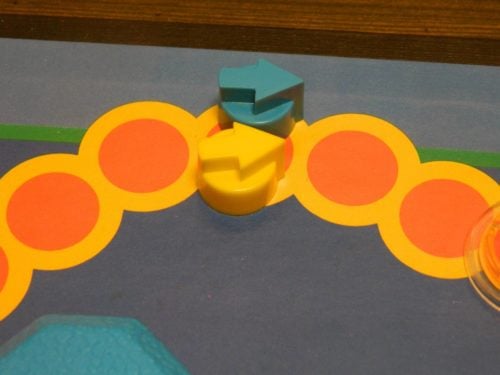 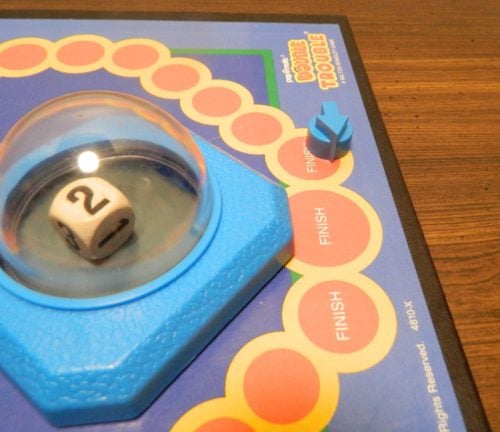 One of the blue playing pieces has landed on one of the finish spaces. The piece will be removed from the gameboard as it is safe for the rest of the game.

The first player to get both of their playing pieces to one of the finish spaces wins the game.

My Thoughts on Double Trouble

Seeing as it is a spinoff game, I was curious about how similar Double Trouble would be to the original Trouble. The two games obviously share things in common outside of just the name. Both are children’s roll and move games where you use a Pop-O-Matic dice roller in order to roll the die. The ultimate goal is to get your pieces to the end of the gameboard. Both games even have a mechanic where you send pieces back to the start when another piece lands on them.

There are two main differences between the two games. First the gameboards differ with Double Trouble having the detour wheels. The other major difference is that you are moving both of your pieces at the same time. These two mechanics add a little strategy to the original Trouble. Despite these differences the two games do feel very similar.

I would say that the best thing about Double Trouble comes from the fact that the game includes two Pop-O-Matic dice rollers. If you have read my other reviews of games that have utilized a Pop-O-Matic you will know that I have always been of fan of the component. The component is really simple and doesn’t really change the gameplay in any noticeable way. There is just something really satisfying about using a Pop-O-Matic dice popper though. With two dice poppers you get to pop twice as many dice.

Outside of being able to use the component more, having two dice poppers actually has an impact on the gameplay. The most noticeable impact on the gameplay is that you will be rolling two different numbers each turn. One number will be used for each playing piece. As you get to choose which number will be used for each piece, this adds some strategy to a game that otherwise wouldn’t have it. Usually it is pretty obvious which dice you should use for each playing piece, but it does add some meaningful decisions to the game. The order in which you move your pieces as well as which dice you choose to use for each piece will have an impact on the game. It doesn’t add a lot of strategy to the game, but it gives the game more strategy than a lot of roll and move games.

The other thing that comes out of having two Pop-O-Matic dice rollers is that you can have “pop-offs”. A pop-off is pretty simple. Both players race to pop their dice as quick as possible in order to roll a six. While this mechanic is really simple, it is surprisingly fun. It probably is the best part of the entire game. I have always been a fan of speed games. Adding in the Pop-O-Matic dice rollers makes the speed mechanic even more enjoyable. It is hard not to have fun with this mechanic. It actually plays a big role in the game as well since losing can have grave consequences. Being sent back to the start especially if you have already made it pretty far along the gameboard can be a huge setback. This puts pressure on you to beat the other player in the pop-off.

Double Trouble has one more mechanic that adds a little strategy/decision making to the game. Whenever you land on a star space you get to turn one of the detour wheels. This can be done to help your own pieces or hurt the other players. Usually it is pretty obvious what you should do. If possible you want to turn the wheels to make it easier for your own pieces to reach the end. You can also turn a wheel to turn another player’s pawn in the wrong direction. You can even turn a wheel to block a player from moving their piece onto the next section of the board. These decisions are usually really obvious, but they do add a little strategy to the game.

While these new mechanics add a little strategy to Double Trouble, at its core the game is still a pretty basic children’s roll and move game. You roll the dice and move your pieces the number of spaces you rolled. Ultimately your decisions don’t have a huge impact on the game. The numbers you roll will likely determine whether you will win or lose the game. Whoever rolls the right numbers at the right times will win the game. Rolling the wrong number at the wrong time can set you back a lot as well. Having both of your pieces land on the same space sends you back to the start which can kill your chances in the game. If you roll too high of number when you reach the end of the path you will move right past the finish spaces and then have to loop around. No matter how much strategy some of the mechanics add to the game, at the end of the day the outcome will likely come down to who rolls the best.

Double Trouble might be a pretty basic children’s roll and move game, but that means that the game is also quite easy to play. Basically if you can count to six you shouldn’t have any trouble playing the game. The game has a recommended age of 5+ and that seems right. You can teach the game in minutes and young children should have no problems playing the game by themselves.

This is a good thing as Double Trouble is mostly meant for children. I think younger children could enjoy the game quite a bit. It doesn’t really have enough to it though to keep older children or adults interested for long. You basically do the same things over and over again until one of the players get both of their pieces to one of the finish spaces. This gets boring pretty quickly. For this reason I probably wouldn’t recommend Double Trouble for anyone except for young children unless you are playing it with younger children or have nostalgia for the game from when you were a kid.

The components for the most part are solid but unspectacular. The Pop-O-Matic dice poppers work as well as always. The other components are made solidly as well. The components are just kind of dull though. The gameboard is pretty basic as there isn’t much to the artwork. Outside of the arrows on top of the pieces, the playing pieces are also pretty generic. Basically the components serve their purpose, but don’t do much else.

Should You Buy Double Trouble?

Double Trouble is a pretty generic children’s roll and move game. You basically roll the dice and try to get your pieces to the finish spaces. Double Trouble does improve upon the original game mostly because it adds a little strategy to the game. First the game gives you an option of how many spaces you want to move each of your pawns. There are some decisions to make with regards to how you move your pieces as well. The pop-offs are also surprisingly fun and actually have pretty high stakes. Double Trouble is also quite easy to play which makes it perfect for children. Unfortunately it won’t be very enjoyable for anyone but young children and their parents. The problem is that the game gets repetitive pretty quickly. The game also still relies on quite a bit of luck.

If you would like to purchase Double Trouble you can find it online: Amazon