Created in 1933 Monopoly has grown into one of if not the most recognizable board game in the entire world. For a game created over 80 years ago it is actually quite impressive that the game is still as popular as it is. Monopoly has always had a love/hate relationship with board gamers as some people really like it while others hate it. One of the biggest complaints people have with Monopoly is that the game takes way too long which is a complaint that I totally agree with. Because of the popularity of the franchise Parker Brothers/Hasbro has tried several times over the years to fix this problem which has lead to quite a few spinoff games that have utilized the Monopoly theme. A while back we even looked at one of these games the Monopoly Card Game. Today I am looking at another of those games Don’t Go to Jail which was later tweaked and renamed Monopoly Express. These two games take Monopoly and turn it into game that relies entirely on dice rolling. While you can have some mindless fun with Don’t Go to Jail/Monopoly Express, the game has some serious problems which keep it from being a good game.

How to Play Don’t Go to Jail and Monopoly Express

Place the gameboard in the middle of the table along with the dice. Players decide how many points that they will play to. The players choose who will start first.

On a player’s turn they will roll all ten dice. If a player rolls “Go”, “To”, or “Jail” these dice will be set aside and cannot be re-rolled. The player will then look at the rest of their dice and decide which dice they would like to keep and which dice they would like to re-roll. Players are trying to get dice of the same color/symbol in order to score points. A player sets aside the dice that they would like to keep. The player can no longer re-roll these dice. A player cannot set aside the “Go”, “To”, or “Jail” dice if you rolled one of the blank sides. When a WILD is rolled and the player sets it aside, the player has to choose what it will represent and they can’t change it later. 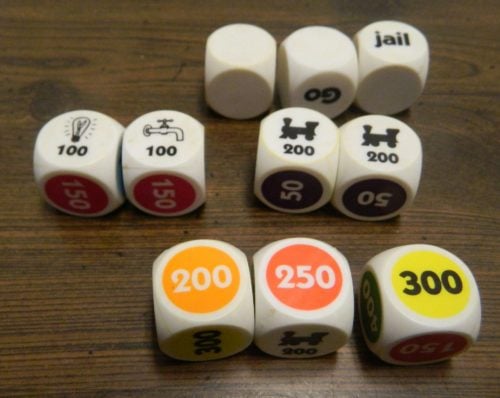 For this player’s first roll they rolled “jail” so they must set that die aside. The player can then decide whether they to keep any of the other dice. They may want to to consider keeping the two utilities and/or the railroads.

The player can then re-roll the rest of the dice that they didn’t set aside. The player can continue to roll the dice until one of two things happen: 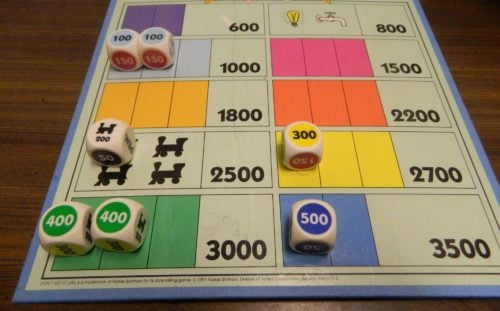 This player decided to quit but didn’t complete any sets. For their score they should take the two green dice to score 800 points for the round.

Otherwise the complete sets are worth the following amount of points: 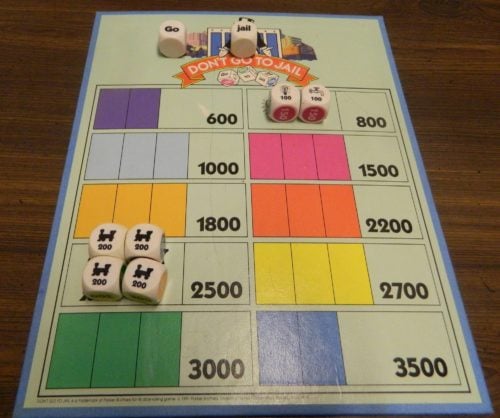 This player has completed both the railroad and utility sets. The player will score 800 points for the utilities and 2,500 for the railroads for a total of 3,300 points.

In addition to the rules in Don’t Go to Jail, these additional rules were added to Monopoly Express:

My Thoughts on Don’t Go to Jail and Monopoly Express

Basically the whole game comes down to rolling your dice to score the most points while also avoiding rolling the symbols that will send you to the aforementioned jail. A player’s turn basically boils down to roll the dice, check to make sure you have avoided jail, choose which dice to keep, and then decide if you want to roll again. With the gameplay being so simple you could easily teach the game to new players in minutes. The other name that the game goes by, Monopoly Express, also seems to be quite appropriate because you can easily finish a game in 15-20 minutes.

I honestly think the only “difficulty” in the game comes from the fact that you have to look at all of the sides of the remaining dice before you decide on whether to keep a die. What I mean by this is that since certain colors only appear on certain dice you need to make sure there are still dice remaining to complete a set before you decide to keep dice for it. This leads to a somewhat tedious process of checking out all of the sides on each and every die before you can make any decisions. While this is kind of annoying there really isn’t anything the game could have done to prevent it. You don’t want to keep dice that won’t help you and I don’t see a good way to analyze your options without looking at all of the sides of the dice.

Probably the biggest problem that I had with Don’t Go to Jail is the fact that the values of the different sets seem to be totally messed up. The value of the sets range from 600 to 3,500. So I will admit that the less valuable sets are easier to roll than the higher value sets. For example you are twice as likely to roll the dark purple set than you are the dark blue set. The problem though is that the dark blue set is between five and six times more valuable than the purple set. With this disparity between difficulty to roll and reward I don’t know why you would ever keep one of the lower sets unless you are going to quit at that point anyways. The only lower value set that I actually think is a good value is the utilities since the only dice that feature the utilities also feature all of the other low value sets. Since the utilities are much easier to roll I would suggest taking the utility set whenever you are able to roll it.

While I never confused Don’t Go to Jail for a strategic game, these problems really hurt the press your luck mechanic of the game. With the low value sets not really even being worth your time, the game takes away most of your decision making. Outside of taking a lower set because you have already decided to quit, I really don’t see any reason to keep them. You might end the round scoring no points but you aren’t going to win the game if you mostly go for the low value sets. For example it doesn’t pay to go after a set that is worth only 1,000 points when it is not that much harder to get a set worth 3,000 points. If you get this 3,000 point set every three turns you are in the same position or an even better position than if you went for the 1,000 point set every turn. So instead of having a good risk/reward decision, most of the time it is pretty obvious what dice you should keep and whether you should quit or continue rolling the dice.

Since it doesn’t really pay to pursue the lower valued sets the game basically boils down to who is better at rolling the high value sets. While basically all dice rolling games rely heavily on luck, Don’t Go to Jail seems to rely on it even more than most. Outside of deciding which sets to pursue and when to quit you can’t make any decisions that actually impact the game. Since you pretty much should only go after the high value sets, this means the game relies almost entirely on luck. The players that roll the high value sets and avoid the jail dice are going to win the game. While I don’t mind a decent amount of luck in a game, I prefer that there be some actual meaningful decision making as well.

So I will admit that I really haven’t had a lot of compliments for Don’t Go to Jail. The problem with the game is the fact that it is one of the most generic dice rolling games that you will ever find. You roll the dice, decide whether you are going to press your luck and then see what happens. There is nothing terribly wrong with this type of gameplay but it also is not really any different than hundreds of other dice rolling games. Don’t Go to Jail is not a terrible game as you can have fun with it but it is the very definition of a board game focused on mindless fun.

Should You Buy Don’t Go to Jail or Monopoly Express?

Don’t Go to Jail/Monopoly Express were designed as a faster travel version of the original Monopoly. Instead of buying properties and charging rents you just roll the dice hoping to score points. Outside of the theme Don’t Go to Jail shares nothing in common with the original Monopoly. So I will say that I appreciate the simplicity and length of Don’t Go to Jail. It is a game that you can finish in 15-20 minutes that you don’t have to put too much thought into. This is the biggest problem with the game as well though. There really is very little decision making in the game. Most of these problems come from the values of the sets being way off the mark. I really don’t see many reasons why you would ever pursue the lower valued sets. This lessens the risk/reward decision since you aren’t risking much if you don’t have a valuable set. Basically Don’t Go to Jail/Monopoly Express is a decent dice rolling game that can provide some mindless fun. Don’t expect much else though.

Don’t go to jail is a brilliant game to play with young kids where monopoly is too long for them to play. Don’t go to jail is quick and they can practice addition. They also are encouraged to understand risk taking and the concept of which dice to keep to enable them to get score the whole set. My children are now in their thirties and we played this and similar games when they were young. I am now introducing my grandchildren who are 5, 7,8 and 12 to this game.