By far the most popular genre for children’s board games has always been the roll/spin and move game. This is not surprising as it is quite easy to make simple roll and move games that children of almost any age can play. The only real mechanic in most of these type of games involves some basic counting as you figure out which space to move your pawn to. To distinguish themselves, a lot of these type of roll and move games use some sort of gimmick to try and stand out. I can’t say that I had high hopes for Don’t Feed the Gators as I expected it to be another generic children’s roll and move game. I decided to give the game a chance though because the gator mechanic looked somewhat interesting. Don’t Feed the Gators’ gator mechanic is kind of clever and kids will love it, but there isn’t enough to the game to make it anything more than another generic children’s roll and move game.

How to Play Don’t Feed the Gators 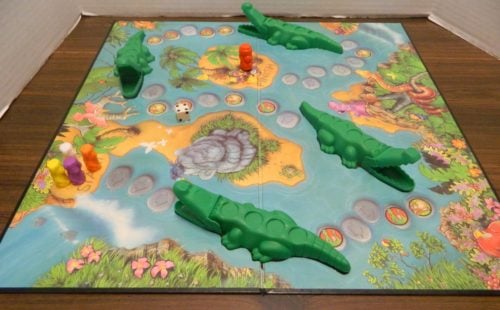 A player begins their turn by rolling the die and moving their monkey forward the corresponding number of spaces. When a monkey approaches a gator they will count each space on the gator as an individual space. 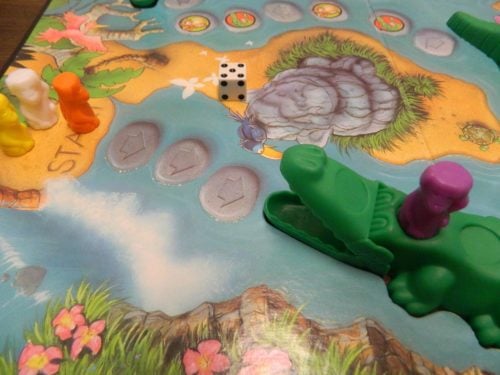 The purple player rolled a five so they moved their monkey five spaces.

When moving if a player lands on a monkey space, they may choose to swap the position of their monkey with another monkey. Neither player takes the action on their new space. 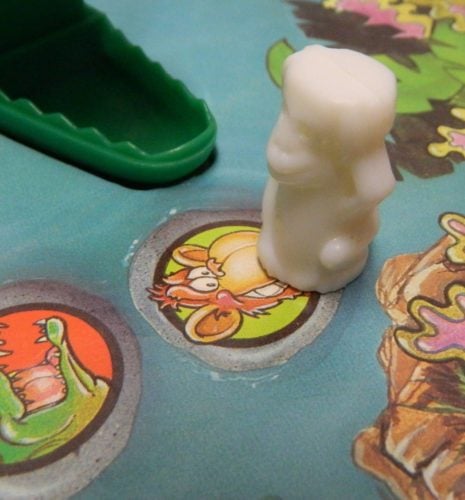 The white monkey has landed on a monkey space. They have the option to swap their monkey with any other monkey on the gameboard.

If a player lands on a gator space, they choose one of the other monkeys. This monkey is moved forward  into the mouth of the nearest gator (in the direction of the finish space). If there are no empty gators in front of any of the players or all of the players are past the last gator, this action is ignored. The current player then uses the red monkey to try and eat the monkey and send it back to the start. 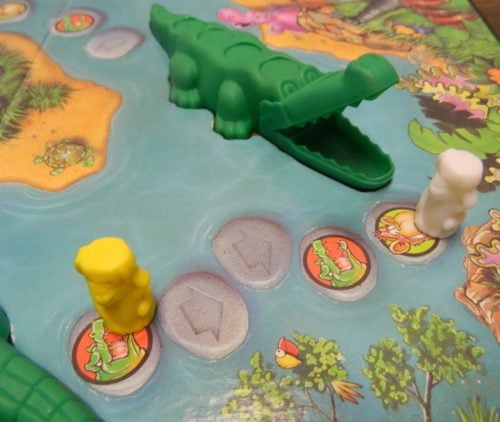 The yellow monkey has landed on a gator space. They have chosen to send the white monkey to the mouth of the next gator.

Whenever a pawn lands on a space occupied by another player’s pawn, the current player moves their pawn forward to the next unoccupied space.

After moving their monkey and taking any necessary action, play passes to the next player clockwise. 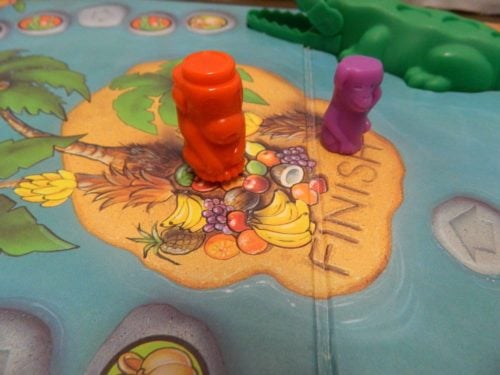 The purple monkey has reached the finish line so they have won the game.

My Thoughts on Don’t Feed the Gators

Having never played Don’t Feed the Gators when I was a kid, I didn’t have any nostalgia for it. Thus I didn’t have high expectations for the game. I thought it was going to be another very generic children’s roll and move game with a gimmicky gator mechanic added in to try and differentiate it from other children’s roll and move games. After playing the game, my initial impression was unfortunately spot on.

At its core Don’t Feed the Gators is the very definition of a generic roll and move game. Players take turns rolling the die and moving their playing piece forward the corresponding number of spaces. There are a couple spaces that allow you to take a special action, but for the most part the game comes down to who rolls the best. As the game relies almost entirely on rolling the die and moving, it shouldn’t surprise anyone that the game is quite simple and straightforward. As there are only a few simple mechanics, it only takes around a minute or two to explain the rules to new players. The game has a recommended age of 6+ which seems appropriate as players only need to be able to count up to six to be able to play the game. The game also plays pretty quickly as most games should only take around 15-20 minutes to play.

Mechanically speaking, I think the gators are quite clever. You basically choose one side of the red monkey and place it on the gator’s neck. If you choose the “right” side, the red monkey will force the gator to slowly close its mouth. In action this looks pretty cool as it feels like the gator is closing its mouth by magic. Young children will probably be really impressed by the gators. In reality the gators and the red monkey have magnets/metal inside them. I didn’t take apart the monkey or gator to verify, but I am guessing that the magnet in the monkey either attracts or repels the magnet/metal in the gator which closes the gator’s mouth. For such a simple mechanic, I thought this was the best part of Don’t Feed the Gators.

Unfortunately outside of it looking pretty cool when the gator closes its’ mouth, there is very little to the underlying gameplay mechanic. The mechanic basically boils down to a 50/50 chance of the gator eating your monkey and sending you back to the start. At first I thought there was going to be a way to game the system by trying to remember which side of the monkey closes each gator’s mouth. Adding a memory mechanic to the game would have brought something to the game. The game made it impossible to know which side of the monkey will close each gator’s mouth though. Therefore the only way to tell which side of the monkey will close a gator’s mouth is by cheating. Thus the mechanic only adds more luck to the game. Guess right and you keep your monkey safe. Guess wrong and you are sent back to the start. It is kind of a shame that the game couldn’t think of anything better to do with the gators as it could have made the game into a decent roll and move game.

While this mechanic is all too familiar to most children’s roll and move games, I have to quickly discuss the swapping positions mechanic. I have never liked swapping mechanics in roll and move games and I hate it in Don’t Feed the Gators as well. All they do is add more luck to a game. A player could make a lot of progress around the board and then suddenly, due to no fault of their own, they lose all of that progress. With this mechanic in place, a large portion of the game could become pointless. You could do terrible throughout the game and then get lucky on one turn and win the game. I can see why designers put these type of mechanics into children’s games but I have always hated them.

As far as the components are concerned I would say that are solid. As I mentioned earlier I think the gators are quite clever. The monkeys are made of plastic but they show a decent amount of detail. The artwork on the gameboard is pretty good but otherwise the gameboard is typical of a 1990s board game. Basically the components do their jobs well but are far from spectacular.

Should You Buy Don’t Feed the Gators?

At the end of the day Don’t Feed the Gators is exactly what you would expect it to be. It is a pretty generic children’s roll and move game. You mostly just roll the die and hope to be the first player to cross the finish line. With the addition of the swapping mechanic that I don’t like, the winner of the game is going to come down to which player is the luckiest. The only somewhat unique mechanic in the game is the gator mechanic. Mechanically speaking, how the gators close their mouths is pretty cool. Unfortunately the associated gameplay mechanic is nothing more than a 50/50 guess that can have a pretty drastic impact on the game.

I have a pretty hard time recommending Don’t Feed the Gators. For an adult that never played the game as a kid, I found the game to be quite boring. I don’t see many adults getting much enjoyment out of the game. If you have fond memories of the game from your childhood, you may get a little nostalgic fun out of the game but I don’t think it will last. I think the biggest audience for the game is younger children and their parents. I can actually see younger children enjoying the game quite a bit as they will enjoy the gators’ mouths “magically” closing. If you have young children who would be interested in the game’s theme, I think it might be worth picking up Don’t Feed the Gators if you can get a good deal on the game.

If you would like to purchase Don’t Feed the Gators, you can find it online: Amazon