I have played quite a few launching style board games in the past. Ever since I was a child I have liked these type of games. They may be made for children and far from complex but there is just something enjoyable about them. Having played so many of these type of games you can usually figure out pretty quickly which ones are going to be pretty good and which ones were quick money grabs. While I have played a lot of these type of games it is pretty easy to recognize that most launching games are not particularly original. The basic goal is to either score the most points or get rid of all of your pieces first. When I saw Don’t Bug Me I was really intrigued by the net mechanic. Don’t Bug Me had the potential to be one of the best launching games that I have ever played but is almost ruined by the subpar components.

How to Play Don’t Bug Me

The players/teams sit on opposite sides of the gameboard. Each player takes a bug launcher and places it 12-18 inches from the net. Each player also takes six bugs.

All of the players play the game at the same time. Players place one of the bugs on their launcher and then launch them towards the net. Players are trying to get rid of their bugs in one of two ways:

The game ends when one of the players/teams have no bugs (not including bugs attached to the net) still on their side of the net. The player/team with no bugs remaining wins the game. 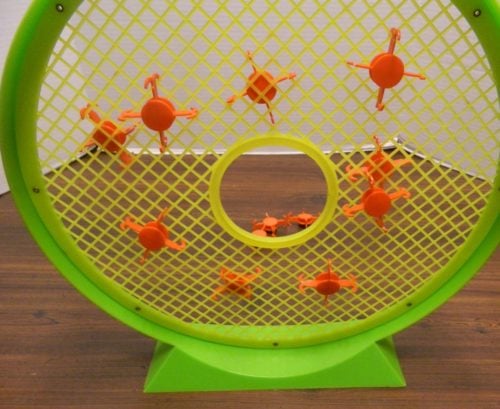 One of the players have gotten rid of all of their bugs so they have won the game.

My Thoughts on Don’t Bug Me

While Don’t Bug Me shares a lot in common with most launching games, I was really intrigued by the idea of the net. While the mechanic isn’t revolutionary it is something that I have never really seen in another one of these type of games. Being able to stick the bugs onto the net gives players more options and actually adds a little strategy to the game. Instead of aiming for the small hole in the center of the net you might just aim for the net as it is easier to hit which allows you to get rid of your bugs quicker. There is even the opportunity to aim for the net trying to knock the other player’s/team’s bugs off.

At first I will admit that I was a little skeptical about the net. I really didn’t think the net would play that big of role in the game since how easy could it be to get the bugs to stick to the net? I quickly found out that the net works a lot better than I was expecting. We played the game with teams of two with ten bugs on both side of the net to start the game. By the end of a game we regularly had eight or more bugs stuck on the net. There were even several times where one bug would hang off another bug. While I would still usually aim for the center hole, since it helps you while hurting the other player/team, sticking bugs to the net is a more valid strategy that I initially expected.

Outside of the net Don’t Bug Me plays a lot like almost every other launching game. The game has very little strategy. Success mostly relies on a combination of skill in launching the bugs and luck. While I wish Don’t Bug Me actually had some strategy, it is still a fun game for the whole family. The game takes like a minute or two to explain to new players and most games will end within five to ten minutes. With how short the game is it is very likely that you will want to play a couple games before you put it away for another day. Basically I would say that if you enjoy these type of launching games you should have fun with Don’t Bug Me.

Don’t Bug Me actually had the potential to be one of the best launching games that I have played. Unfortunately the game never lives up to that potential due to a couple significant issues.

The biggest problem with Don’t Bug Me is actually present in most launching games. Just like so many other games Don’t Bug Me has the problem where the bugs fly everywhere. This leads to players having to scramble all over the floor picking them up. This forces you to either regularly stop the game to pick up the bugs or one player will be at a disadvantage where they have to pick up the bugs while the other player(s) continue to shoot bugs.

This problem is probably even worse in Don’t Bug Me though because it actually impacts the gameplay itself instead of just being a nuisance. The problem comes from the fact that a key element in the game is to try to get rid of all of your bugs either by sticking them on the net or by shooting them through the hole in the center of the board. This becomes an issue because bugs will regularly fly over or to the left or right of the net. These bugs should be returned to the player who shot them since the only way you are supposed to be able to get rid of bugs is to get them on the net or shoot them through the center hole. In the rush of the game though it is hard to tell whether bugs actually went through the center hole or if they flew around the net. Players are going to have to be honest with each other and take bugs back when they shoot a bug over or around the net in order to keep the integrity of the game intact. Even if the players are honest this still creates a hassle as players will regularly have to pass bugs back and forth.

While I think the game includes a large enough gameboard/net, I really wish it would have come with some sort of barrier that you could set up to prevent bugs from accidentally flying over to the other side of the net without going through the center hole. The only other potential solution I have is to place the launchers further away from the net. We ended up having the launchers slightly closer to the net than the recommended 12-18 inches but I don’t know how much a longer distance would have helped. The bugs can really fly through the air so even at a longer distance they still likely would have flown over or around the edges of the net.

The other big problem that I had with the game comes from the component quality. I actually think the net/gameboard is pretty good as it is sturdy and pretty large. The large net does lead to the box being quite large though. If you are a space conscious person, Don’t Bug Me might not be the game for you as the box is one of the larger boxes that I have seen for a board game. The two big problems that I had with the components come from the bugs and launchers. I will admit that this might be partially due to age as the game is almost 50 years old. The quality of the game I found was in an acceptable condition though so I am guessing it will be similar to most copies of the game.

The bigger problem is with the bugs. There are two main issues with the bugs. First each bug is made up of two parts. Unless you decide to glue all of the bugs together, the bugs will regularly split into two as you are playing the game. While the bugs can easily be put back together, it is a pain wasting time putting them back together as you are trying to play the game. The bigger problem is that the bugs are made of pretty thin plastic. While this makes them more aerodynamic it leads to them breaking easily. The problem is that each bug has small hooks which are used to latch onto the net. Due to the thin plastic whenever one of these hooks hit the table they get damaged and snap off pretty easily. In my copy of the game over half of the bugs were missing at least one of their hooks. Since this impacts their ability to attach to the net, the more you play the game the less of an impact that the net will have on the game.

Should You Buy Don’t Bug Me?

Don’t Bug Me had the potential to be one of the best launching games that I have ever played but fails to live up to that potential. The idea of adding the net is actually a really good addition to the game. Instead of just shooting the bugs through the center hole you can aim for the net trying to get your bugs to stick. I was actually surprised by how well this actually works. If you like these type of games you will have fun with Don’t Bug Me. The problem is that Don’t Bug Me’s components let down the rest of the game. Players will regularly shoot bugs over or around the net which becomes a mess when players have to figure out who should have control over these bugs. The bugs are pretty cheaply built which means it is not that hard to break them. The launchers are also not particularly consistent as some work quite well while other don’t work well at all.

While Don’t Bug Me has some interesting ideas for a launching game, I don’t think it will appeal to people that generally don’t care for these type of games. If you like these type of games I think you will have fun with Don’t Bug Me. Due to all of the issues with the components I can’t really recommend paying much for the game though. I would also recommend only purchasing the game if the components are in good condition. If you can get a good copy of the game for a good price though I would recommend picking up Don’t Bug Me.

If you would like to purchase Don’t Bug Me you can find it online: eBay