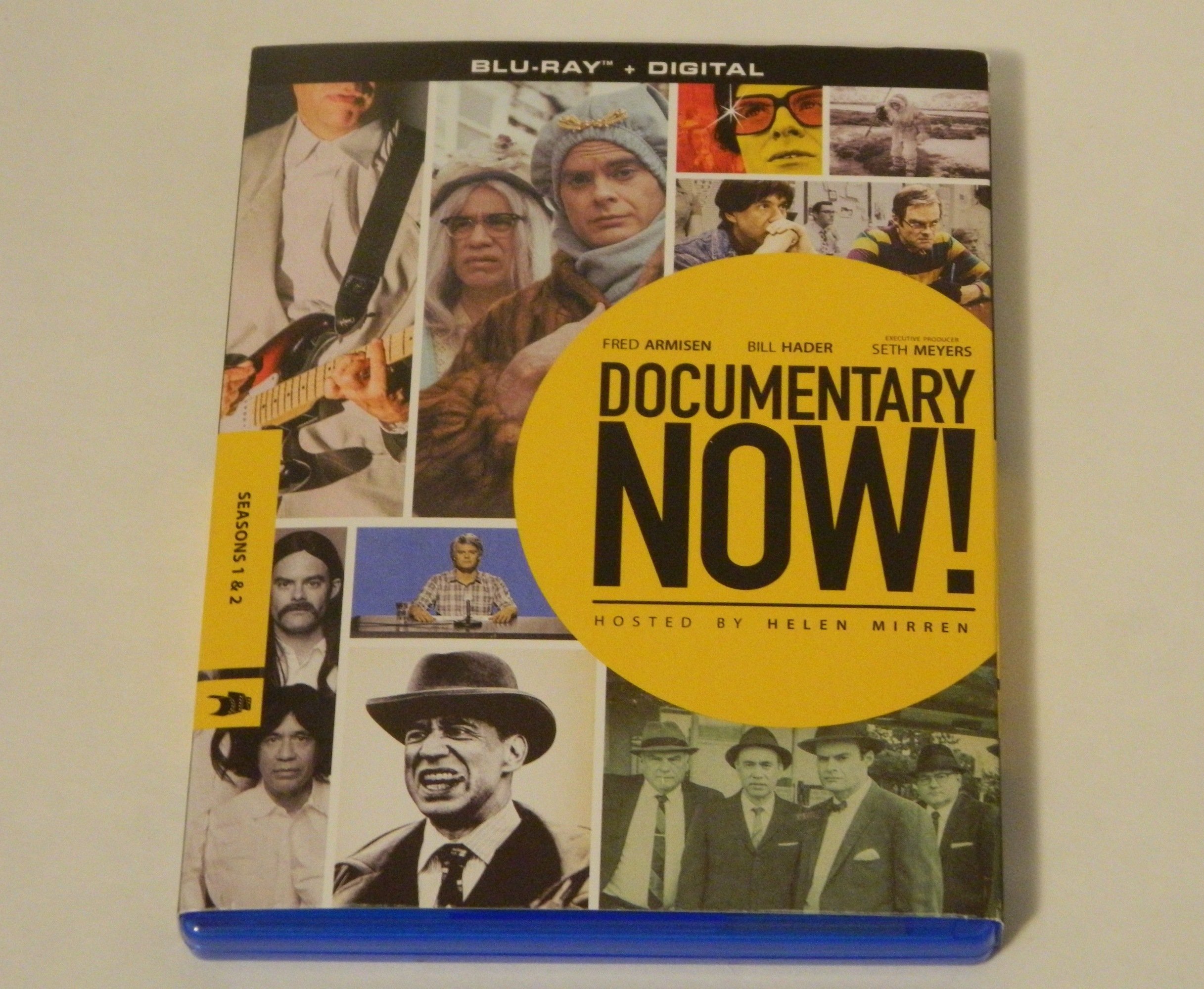 If you are an avid reader of this blog, you probably know that I am a big fan of documentaries (as well as comedies). Documentary Now! is an IFC mockumentary series where each episode parodies a famous documentary from the past. As a fan of documentaries and comedies, I am pretty much the definition of this series’ target audience. With the first two seasons coming to Blu-ray and DVD for the first time this week, I decided to take a look at the series. While I overall enjoyed Documentary Now! and there is certainly a lot to like about it, I did have some issues with it as well.

Documentary Now!: Seasons 1 and 2 includes 14 half-hour episodes, which mock twelve different documentaries (two of the episodes are double-length) like Grey Gardens, The Thin Blue Line, Jiro Dreams of Sushi, Nanook Revisited, VICE News, and The Kid Stays in the Picture. Series creators Bill Hader and Fred Armisen usually play an important character in each episode and guest stars like Michael Keaton, Owen Wilson, and Jack Black make appearances. Each episode is introduced by Helen Mirren. The episodes aren’t straight parodies or mockumentaries, instead they mostly take the theme and style of the documentary in question and twist it to become funnier. For example, instead of “Sandy Passage” being a humorous retelling of Grey Gardens, it takes the main plot but goes in a slightly different direction (but with a much different ending).

Even though I am a documentary buff, unfortunately I haven’t gotten around to watching most of the ones parodied in this series. I know they are all great and most of them are even award-winning, but I tend to prefer more obscure and entertaining ones instead of the more artsy ones covered in this series. However, I did know the basic concept of most of them. Still, without having seen them I can’t really comment on how well they nailed the parodies. One of the biggest problems with the show (and the mockumentary/parody genre in general) is the lack of consistency. Some episodes are hilarious while others will barely register a laugh. “The Eye Doesn’t Lie” (The Thin Blue Line parody) and “DRONEZ: The Hunt for El Chingon” (a parody of VICE News) are very funny but on the other hand, episodes like “A Town, A Gangster, A Festival” have little to laugh at. In general, most episodes tend to be more of the inconsistently funny variety where there will be several jokes that make you laugh at loud (“You got floor all in my liver beans” or “Their dog is a chicken.”) but long periods without a single laugh.

In addition, one problem with the concept of this series is that viewers are most likely going to like the episodes poking fun at documentaries they’ve seen and loved more than the others. I’m sure very few potential viewers of this series have seen all twelve of the documentaries (or even more than just a handful), so there will likely be a few episodes you find boring or you don’t quite “get” because you haven’t seen the documentary they’re making fun of. Other than that one problem though, the concept of poking fun at award-winning documentaries is brilliant. Documentaries have a tendency to be “high-brow” so a series that parodies that is a great idea. I do wish the series would have picked a few more well-known documentaries like a Morgan Spurlock one or something like An Inconvenient Truth that way more people have seen. They almost covered The Jinx in season one but didn’t quite have enough time to do it. Another small note about the series, there is plenty of swearing and even some violence in some of the episodes so it certainly isn’t family-friendly.

Documentary Now!: Seasons 1 and 2 is being released on both Blu-ray and DVD. The video quality on the Blu-ray release is quite good but as the series is a lower budget comedy on IFC, of course it isn’t going to look as good as bigger budget shows. It basically looks like broadcast quality, which is completely fine. While I’m usually fine with the lack of extras in most Mill Creek Entertainment releases (since most of them are older and lesser known titles), I must say I am a bit disappointed that none were included in this release since it is a show that is still airing. Some behind-the-scenes footage or interviews with Hader and Armisen would have been nice. However, the release is very reasonably priced ($29.98 MSRP but can be found for about $20 on Amazon) so I’m not going to get too upset about the lack of extras.