Growing up in the late 1980s and early 1990s I remember playing quite a few quirky children’s game that I still remember to this day. One of the games that I remember most was Dizzy Dizzy Dinosaur. Revisiting the game so many years later I was wondering whether it was going to stand the test of time or if it was going to be another one of those children’s games that so often never live up to your fond memories. While Dizzy Dizzy Dinosaur is never going to be mistaken for a great game, it is a solid game for what it is.

Each player selects a color and places all five pieces of that color on their corresponding start space. Place Dizzy the dinosaur near the gameboard. The youngest player gets to go first. 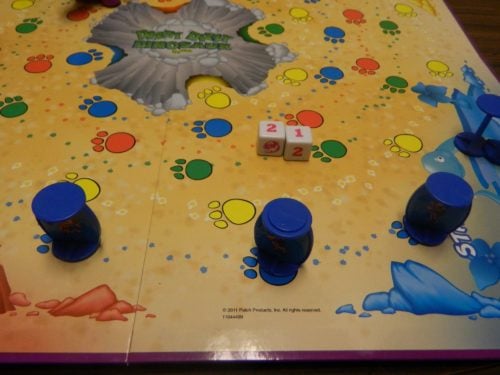 The blue player has rolled a two and a one. The player can either move one playing piece three spaces or one pawn two spaces and another one space.

When a playing piece reaches the cave in the center of the board (doesn’t have to be by exact count), the piece is removed from the board as it is safe for the rest of the game. 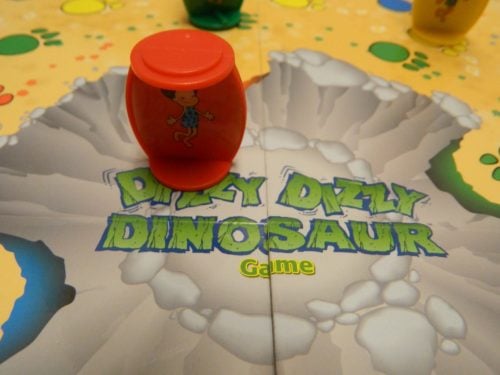 This red playing piece has reached the cave in the center of the gameboard. It is removed from the board and is safe for the rest of the game.

If a player rolls one dinosaur and one number they first must use the number rolled. They then wind up Dizzy and place it in the cave in the center of the gameboard. The player can release Dizzy in whatever direction they want. 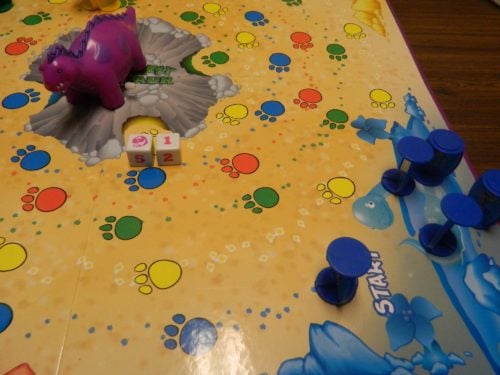 The player rolled a one and a dinosaur. They move one pawn one space and then they wind up and release Dizzy.

Any playing piece that is knocked over or pushed off the paw print that it is currently on, is returned to its’ starting space. 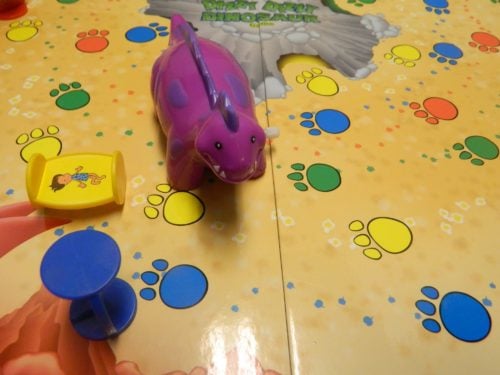 Dizzy pushed the blue player off the space they were on. Dizzy tipped over the yellow playing piece. Both pieces are returned to their home space.

If Dizzy goes off the gameboard at any time, Dizzy is removed from the board until another dinosaur is rolled. After Dizzy is finished moving, the player re-rolls the die that they rolled the dinosaur with. If a player rolls two dinosaurs, Dizzy is wound up and placed on the board twice. Players keep rolling the dice that dinosaurs were rolled on until the player has rolled two numbers. Play then moves to the next player. 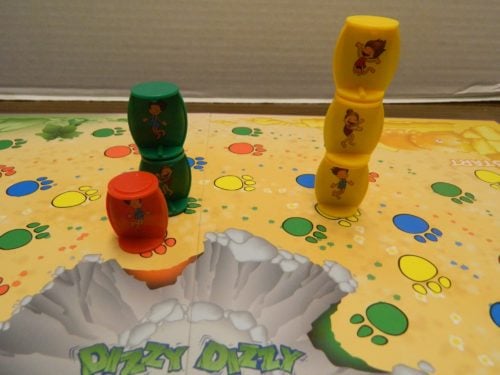 When a player has moved all five of their playing pieces to the cave, they win the game.

When you think of games with an age recommendation of 4+ you usually think of very straight forward bland roll and move games. Since the games are trying to be accessible to such young children they can’t be complicated and thus can’t have much strategy. While Dizzy Dizzy Dinosaur is far from a strategic masterpiece, for a game made for such young children it has more strategy than you would think.

The strategy in the game comes from a risk reward mechanic. You can play the game safe by moving one piece at a time which will allow you to move each piece quicker making it less likely that they will be sent back to start by Dizzy. This can be quite slow though. The other option is to begin stacking pieces on top of one another which allows you to move multiple pieces at the same time. This presents risk though since if Dizzy knocks the stack over they will all be sent back to start so you will have to restart with all of those pieces. While this is a pretty basic risk/reward decision it adds some strategy to a game that is meant for young children while keeping the game accessible. This makes Dizzy Dizzy Dinosaur one of the more enjoyable children’s games for adults to play since there is at least a little strategy in the game.

So is there a preferred strategy in Dizzy Dizzy Dinosaur? I am not sure. Due to the rule that you can’t stack pieces until all of the playing pieces have left the home space, you pretty much need to start the game focusing on moving just a couple playing pieces making sure they reach the cave since if you leave pieces out on the board for too long they are almost guaranteed to be knocked over at some point. Once you get a couple pieces to safety though it is a good strategy moving multiple pieces together in a stack. I actually almost caught up to the leader in the game by being able to move a stack of three pieces. I wonder if allowing players to stack pieces without having to have all of your pieces out of the safe/home space would help or hurt the game.

The most notable and not surprisingly best part of Dizzy Dizzy Dinosaur is Dizzy itself. How could you not love the cute little dinosaur that flies all over the board destroying your chances at winning the game. While Dizzy basically just adds more luck to a game that already has too much luck in it, Dizzy is what makes the game stand out among so many other roll and move games.

The reason Dizzy just adds luck to the game is that there is basically no control over what direction it is going to go after you release it. You could aim it towards another player’s pieces but it will rarely go in the direction that you aim it. You basically need to just hope that it knocks down some opponent pieces and not your own. You can easily get unlucky and have the dinosaur beeline directly towards your pieces every time which was the case for two players in the game I played. It got so bad that Dizzy even started attacking these players playing pieces that hadn’t even left the starting zone.

While this might sound frustrating and it is to the people that it is happening to, it is also the reason for the game’s charm. It is kind of weird to see grown adults cheering for a plastic dinosaur to knock over opponent’s pieces and begging for it not to knock over their own pieces. Kids will probably have a blast watching the dinosaur flying around the board.

While Dizzy is charming, it does create some issues in the game mostly due to Dizzy being too efficient in its’ job. This may just be because we played the newer version of the game (2011 version) but Dizzy was relentless every time it was released. A player was lucky to survive long enough in order to make it to the cave in the center of the board. While it was fun to see the dinosaur and playing pieces fly all over the board, it made the game last longer than it should and eliminated any chance that a player’s strategy would have an impact in the game. The player Dizzy avoided for the most part ended up winning the game.

Even though the game is pretty charming, it also obvious that the game was made for families with young children. The game does have a recommended age of 4+ after all. The problem is that once you take out the dinosaur and the stacking mechanics there isn’t anything to the game other than a boring roll and move game that relies entirely on the roll of the dice. The player who rolls best and avoids getting hit by Dizzy will always win the game. While adults can have a little fun with the game due to nostalgia, the game is mostly for families with younger children. For what it is though Dizzy Dizzy Dinosaur is a solid game.

While I haven’t played the original game for many years, I have to commend the game on its’ components. The dinosaur in both versions of the game are cute but I will always enjoy the original felt version more than the dinosaur in the newest version of the game. The one issue with the dinosaurs is that they seem to wear out pretty easy and don’t work nearly as well after being used for a while. This is not a huge problem but if you are looking at used versions of the game I would make sure Dizzy still works well because the game is kind of ruined if it doesn’t work well. Other than Dizzy the other components are pretty good. The artwork is pretty good and I like how the playing pieces easily stack on top of one another.

Being a game from my childhood I have to admit that I enjoyed the game more than I thought I would. Dizzy Dizzy Dinosaur is not a great game but for a young children’s game adults can still have a surprising amount of fun with the game. The game has more strategy than your typical children’s game and it is just fun watching Dizzy fly all over the board as the players cheer and groan as it knocks over playing pieces. Dizzy Dizzy Dinosaur is still a really straightforward roll and move game though that relies a lot more on luck than player strategy.

Since I have the wind-up version with wheels, I wanted to seie how this one worked. I'm not going to like, I'm a little disappointed there wasn't a video of how the dinosaur moves in this version.

I have actually played both versions of Dizzy Dizzy Dinosaur as I grew up with the original version of the game. It has been over two years since I played the newer version and even longer for the original version. From what I remember the dinosaurs between the two versions of the game work pretty similarly. The biggest difference between the two dinosaurs is that the old version had that felt-like covering while the new version is just plastic.