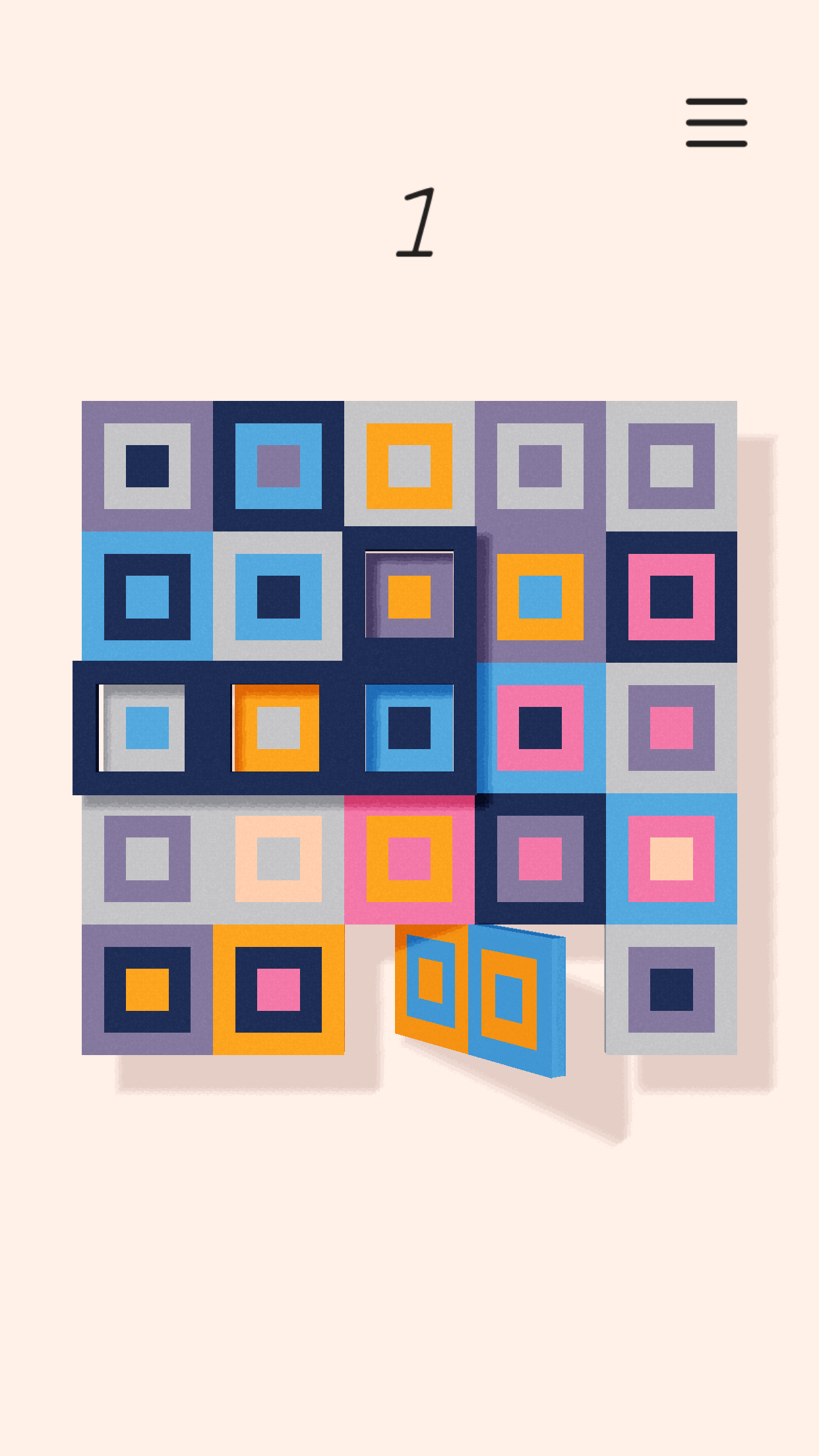 If I had to describe Dissembler’s gameplay I would say that it is a twist on match three games. Each puzzle begins with a bunch of different colored blocks. The goal is to connect three or more blocks of the same color in order to clear them from the board. To complete a puzzle you have to get rid of all of the blocks from the screen. To do this you are given one mechanic where you flip two adjacent blocks. In order for a flip to be accepted at least one group of three or more blocks has to be on the board after the flip is made.

This might seem simplistic (it is) but the game adds in new types of blocks every so often. The game starts with solid colored blocks that just have to be moved next to one another. As the game progresses you will get blocks that have shapes on them that are shared between two blocks, blocks that can’t be flipped, and blocks that have holes in them which contains another colored block underneath. As each new mechanic is introduced Dissembler does a good job introducing it before adding in the next mechanic. When all of these mechanics are added together for the last puzzles they create some really interesting puzzles.

While a lot of the puzzles are pretty easy to solve, I really appreciate that the game easily lets you undo your previous moves. With a press of a button you can reset the last move you made which lets you easily correct any mistakes you make in the game. This is really helpful for puzzles where there is some trial and error. You could be making progress on a puzzle and then hit a roadblock. By reversing one move at a time it makes it a lot easier to figure out where you made the mistake. Without this mechanic you would have had to reset the entire puzzle and started over again.

As far as Dissembler’s difficulty, I would say for the majority of the game the puzzles are pretty easy. A lot of the early puzzles I figured out almost immediately and the other puzzles only took a couple small tweaks reversing one or two moves. If the game’s puzzles would have stayed at this difficulty for the rest of the game I would have been a little disappointed since the game would have been too simple. In the last 20-30 puzzles though the game’s difficulty significantly increases. I think this is mostly due to the game introducing a new mechanic that requires more out of the box thinking. While some of these puzzles are little more difficult than I would have preferred, the later puzzles are more in line with the difficulty that I expected out of the game.

Dissembler’s easier difficulty actually does a good job working with the game’s overall laid back feeling. Dissembler is the perfect type of game to play when you just want to sit back and relax. Dissembler’s artwork and music supports the game’s minimalist approach. For its artwork the game only includes different colored squares. Despite the artwork being so basic it actually looks really nice. I also really like that when you flip the blocks it gives you an indication of which blocks will be removed. This is quite helpful while you debate which move you should make. When you combine the artwork with the game’s music it creates a laid back feeling to the game.

With the game costing $3.99 on PC and $2.99 on mobile, you are getting quite a bit out of Dissembler for the price. The game comes with 120 handcrafted levels. How long it will take to complete all of the levels is going to somewhat depend on the player since some players will be able to solve them quicker than others. I would say that it will take most people at least three to four hours to complete all of the levels. In addition to the 120 levels there is an infinite mode which could add more time to the game’s length depending on how much you like playing puzzles where you try to maximize your score.

The thing that is going to add the most replay value to Dissembler though is the daily challenges. Each day the game includes six new puzzles for you to solve. I am not sure if these puzzles are handcrafted like the original 120 but they feel on par with the original levels. In general I would say the difficulty is on par with the rest of the game. Four to five of the puzzles each day are pretty easy where you should be able to figure them out pretty quickly. The last puzzle or two can be pretty challenging though. The good news is that if you fail to figure out any of the puzzles you can come back another day and the game presents you with a step by step guide to solving each puzzle. The reason I really like the daily challenges is that they are going to really extend the replayability of Dissembler as I can see coming back every so often to check out the puzzles for the day.

When you get down to it Dissembler is the perfect case of you get what you see. Quickly watch the trailer or a clip of the game being played. Does the game look interesting to you? If the game doesn’t look that interesting, Dissembler is probably not going to be for you. If after seeing how the game is played you are interested in trying it out, I think you will like Dissembler. Dissembler is a good minimalist puzzle game that I really enjoyed playing and would recommend picking up.