Pictionary is one of those board games that basically everyone is familiar with. A player draws a picture and tries to get their team to guess the corresponding word. As pretty much everyone already has an opinion on Pictionary, it is unlikely that Geeky Hobbies will ever review the game. When I saw the Disney Pictionary DVD Game though I was intrigued by the idea of a Pictionary game utilizing a DVD. I have always been a fan of the Scene It franchise so I was wondering if adding a DVD could improve Pictionary. The DVD mechanic had some promise but the Disney Pictionary DVD Game ends up being just another bland Pictionary game.

On a team’s turn one of the players will roll the die and draw a card. Each team rotates who is responsible for rolling the die and drawing. The player will look for the section of the card that matches the symbol they rolled. 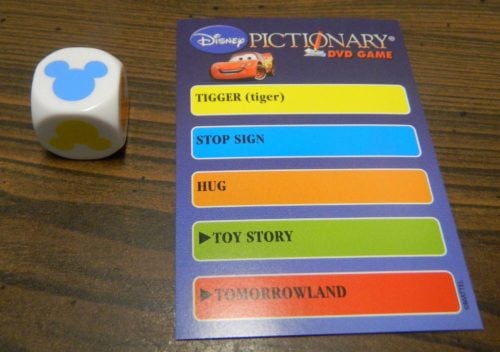 This team rolled blue so they will have to draw a stop sign. 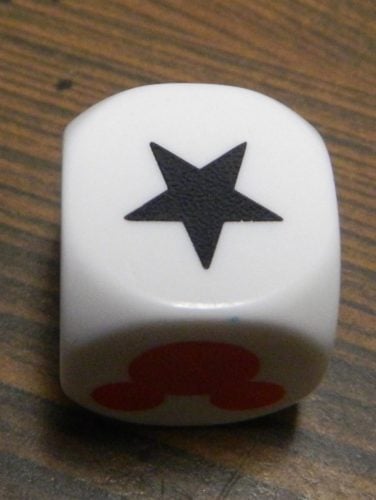 This player rolled the wild symbol so they get to choose the category for the round.

If the section features a word other than “DVD” the player will have to draw the corresponding word. The timer on the DVD is selected which starts a 60 second timer. Like a normal game of Pictionary the player will use the pen and the board to draw the word. The other players from their team try to guess the word. If they guess the word before the timer runs out the team scores a point and the next player on the same team rolls the die and plays another round. If the team doesn’t get the word in time, the team’s turn ends and play passes to the next team. 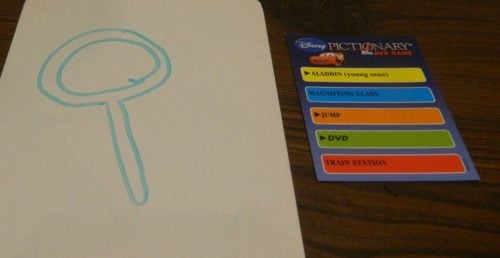 For this round the player had to draw a magnifying glass.

If a player rolls the die and there is an arrow symbol next to the word, this round will be an all play round. One player from each team will draw the word. Whichever team guesses the word first will score the point for the round.

If the die roll corresponds to a section that says DVD the players will use the DVD. Select the category that matches the section on the card that was rolled. All players watch the DVD. The player who yells out the correct answer first scores a point for their team. 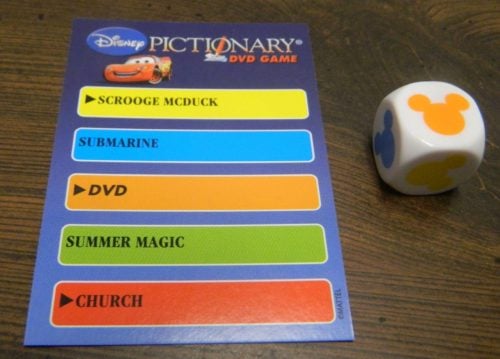 This player has rolled orange so they will use the DVD for the round.

Once a team has scored nine points they enter the final phase of the game. When a team reaches nine points all of their future rounds will be all play rounds no matter what the card says. The first team to score their tenth point wins the game. 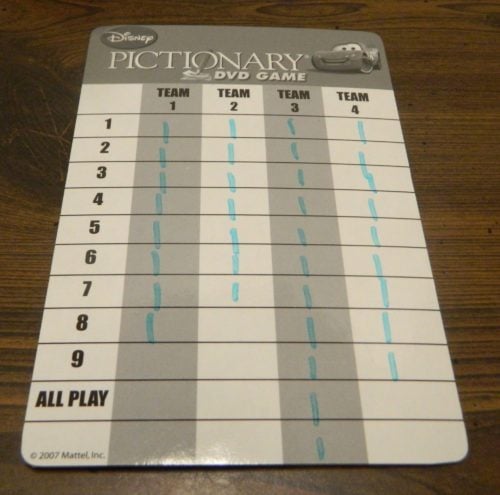 Team three has scored enough points to win the game.

Despite the DVD being the one unique mechanic in the Disney Pictionary DVD Game, I am going to start by talking about the normal Pictionary mechanics as they play a much larger role in the game. In fact you will be spending around 3/4 of the time playing the basic version of Pictionary.

I wouldn’t say that I really hate or love Pictionary. The idea of drawing a word to get your teammates to guess a word is not a bad idea for a game. At the same time it is not the type of game that I will actively try to play. Part of this is because I wouldn’t consider myself to be a very good artist. This was one of the reasons that I was intrigued by the DVD aspect of the game because the box exclaims “Let the DVD Draw for You!” Basically your enjoyment of the main mechanic of the Disney Pictionary DVD Game comes down to how much you enjoy Pictionary.

So let’s move onto the words you will have to draw. Being Disney Pictionary I was expecting all of the things that you would have to draw would relate back to Disney. I was actually quite surprised that this was not really the case. A surprising amount of the words are only tangentially connected to Disney. For example “cookie” technically applies to Disney as there have been cookies in Disney movies before but it could have just as easily appeared in any other version of Pictionary. Generally the character and TV/Movie categories are the most connected to Disney. The other categories can be a lot more hit and miss.

So in addition to being more connected to Disney properties, as a Disney game I was expecting the game to be more on the easier side of the spectrum. I was once again surprised though as the difficulty of the words can be a lot more difficult than I was expecting. Most of the words are simple enough that children will know what they are but drawing them can be much harder. For example “cookie” is quite easy to draw but “groan” is a lot harder to draw. Then you have to factor in that the game is already pretty outdated. For example how many of you would know what to draw for RIP Girls? How many of you even know what RIP Girls is? Well I sure didn’t. So I looked it up and it turns out that RIP Girls was a Disney Channel movie from 2000 about surfing. No one can convince me that “cookie” and “RIP Girls” are of an equal difficulty. The game claims there are different difficulty levels but it just seems like the difficulty is pretty random.

So now that I have gotten the normal Pictionary mechanics out of the way lets look at what the DVD adds to the game. Basically the DVD does what the box says. The DVD basically shows different items and characters being drawn and the players need to try and figure out what is being drawn. Before the picture is drawn the narrator gives the players a little clue on what the answer is going to be in order to give the players some guidance on what they are looking for.

Described like that the DVD mechanics actually sound pretty interesting. I actually think there could have been quite a bit of potential in this area of the game. The problem is that the game does a poor job utilizing the DVD. The obvious problem is that the DVD isn’t used that much. The other problem is that it just doesn’t seem to be utilized properly. For example some of the clips will show a character being drawn. You would think that your goal is to name the character. Instead you are supposed to name the item that is in their hand which isn’t added until the last couple of seconds of the clip. Instead of resorting to deception I think the DVD would have been better if it just drew the main item in a way where it is not easy to recognize until the final touches are added.

Finally I would say the components are solid but unspectacular. While I think the game could have done so much more with it, the production quality of the DVD is solid. I like that the game includes dry erase markers instead of paper and pencils. The biggest problem that I had with the components is that it doesn’t seem like there are enough cards. The game only has 120 cards. The cards are double sided and have five responses per side but with the game utilizing so many cards it means that you will start repeating cards before you would like to.

While I didn’t think the Disney Pictionary DVD Game was going to be great, I had some hope that the DVD aspect of the game would actually add something significant to the Pictionary franchise. While I could see potential for the mechanic, the game just doesn’t utilize it that well. The DVD isn’t used that much and the game could have found better ways to use it. Other than the DVD the game plays like a traditional game of Pictionary. Pick a card and try to draw the word. I was disappointed with this portion of the game as a lot of the words don’t really apply that much to Disney and the difficulty between words can be significant.

Basically if you have never really cared that much for Pictionary, the Disney Pictionary DVD Game is not going to change your opinion. If you love Pictionary and Disney it may be worth picking up the game if you can get a really good deal.

If you would like to purchase the Disney Pictionary DVD Game you can find it online: Amazon